Midcentury Modern Milwaukee isn't always the choice when someone decides to feature Cream City buildings in works of art. But that's where artist Patrick Castro has (mostly) cast his eye for his Make MKE series of drawings that he sells as prints on his website.

Midcentury Modern Milwaukee isn’t always the choice when someone decides to feature Cream City buildings in works of art.

But that’s where artist Patrick Castro has (mostly) cast his eye for his Make MKE series of drawings that he sells as prints on his website.

His detailed works on paper spotlight the former Boy Blue ice cream stand in West Allis, the low-slung office building at Jefferson and Chicago Streets in the Third Ward, the lobby of the main post office on St. Paul Avenue, St. Mary’s Hospital and other familiar but not often heralded sites. (Though he has drawn the Domes, the War Memorial and the Sydney Hih.) 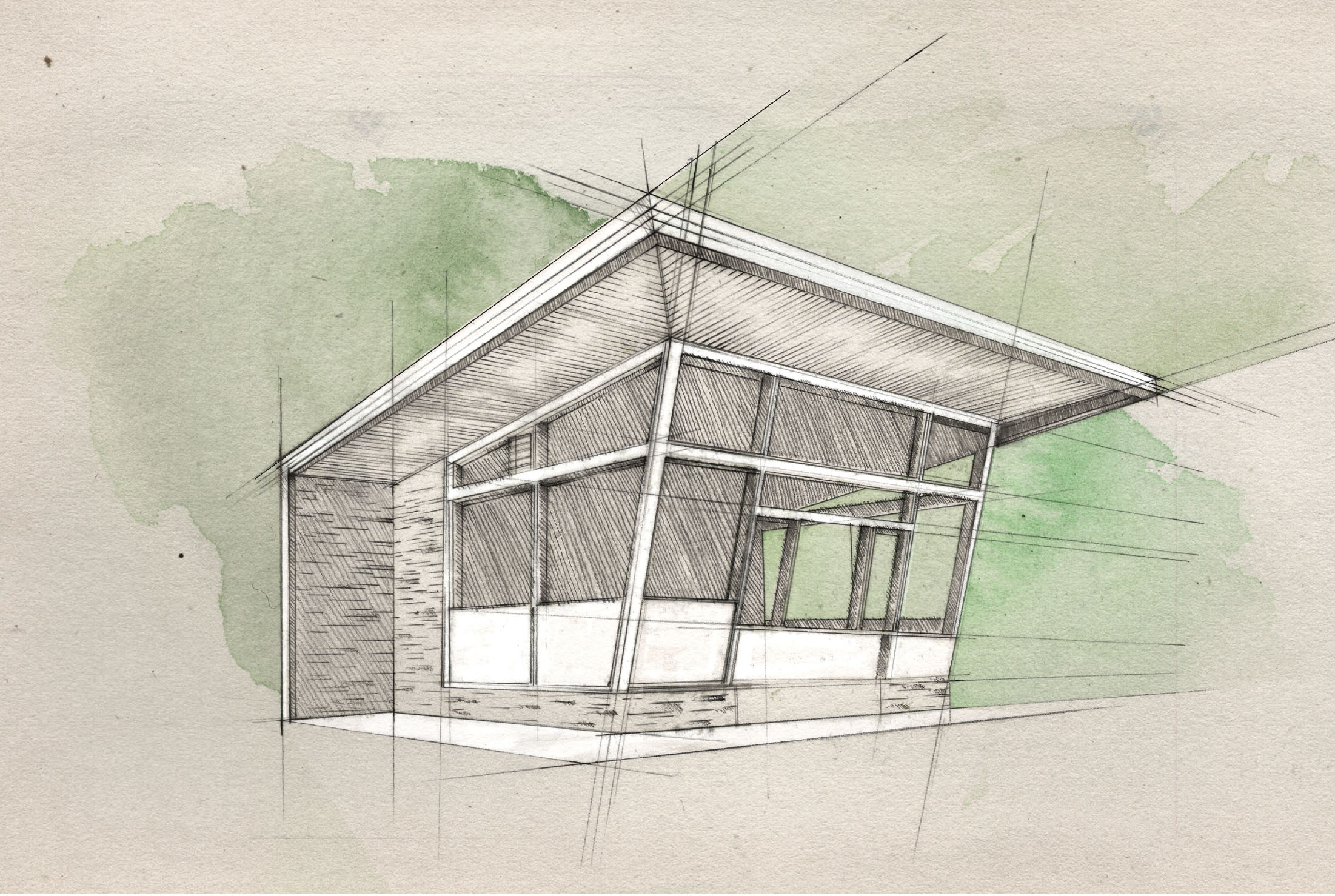 "These are the buildings that we drive by or walk by every day," says Castro. "There’s something that catches your eye but never in a flashy way. My drawings are the equivalent of sitting down and having a deep conversation with someone that’s you’ve worked with for years but just never had the chance to connect.

"Every design project, whether it’s logo or a building, is loved by the designer. It has to be since it's a long and grueling process. As a result, there's a great deal of thought and good intentions poured into the design of the building. The drawings are an opportunity to reflect on design rationale. Many times I gain a deeper appreciation for the building after I’m finished. Ultimately, it’s been my own way of expressing appreciation for those lesser known – or appreciated – moments in our urban experience." 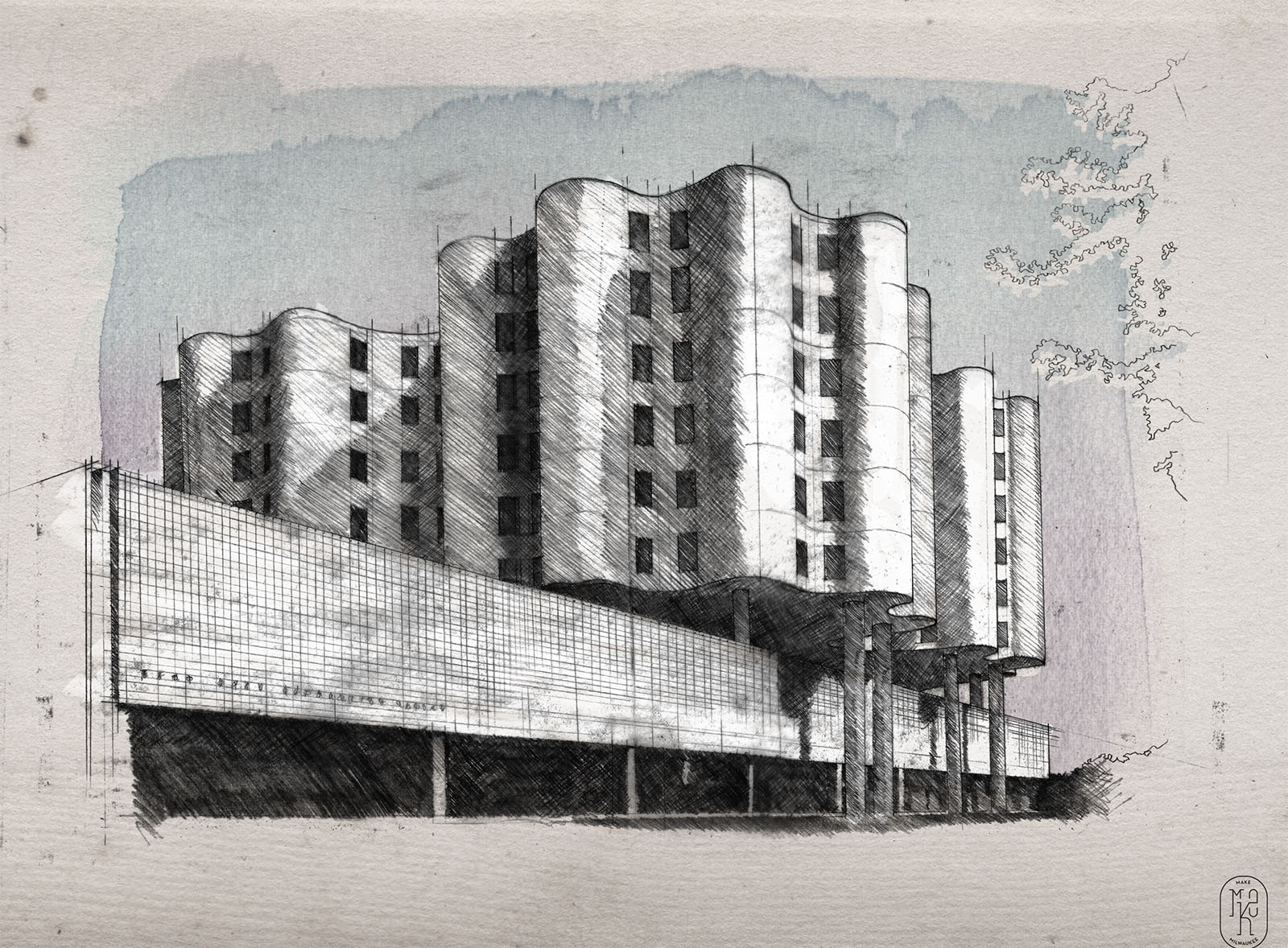 I asked Castro about his background, his art and what he loves about Milwaukee architecture.

OnMilwaukee: Tell me a bit about your background as an artist.

Patrick Castro: I grew up in rural Louisiana and went to college at Loyola University in New Orleans where I studied Graphic Design. Until college, I didn’t take art classes. Drawing was nothing more than copying comic books. Creating as a profession was an idea planted in my head by my cousin, at the time an architecture student at LSU. My love of comic books and movie posters lead me to graphic design.

My wife, Libby, is an architectural designer. When we met, my appreciation for architecture and the long-haul of the process of creating buildings became a huge part of my life. Where I grew up, modern architecture was few and far between. Living in Milwaukee, I appreciate what we have here.

What got you interested in drawing buildings. Have you studied architecture?

I am not an architect nor have I studied architecture. I don’t have the patience required for the rigor of the architecture practice. Because my wife is an architect and we have always bonded over architecture and choreographed space, this series is a a forgone conclusion.

I currently have two drawing series. In addition to the architectural series, I have a series of drawings of natural objects – wood, seeds, etc. – from places we visit; a nice counter balance. There’s a thread that ties these together in that both are typically overlooked things: buildings or unmemorable sticks. 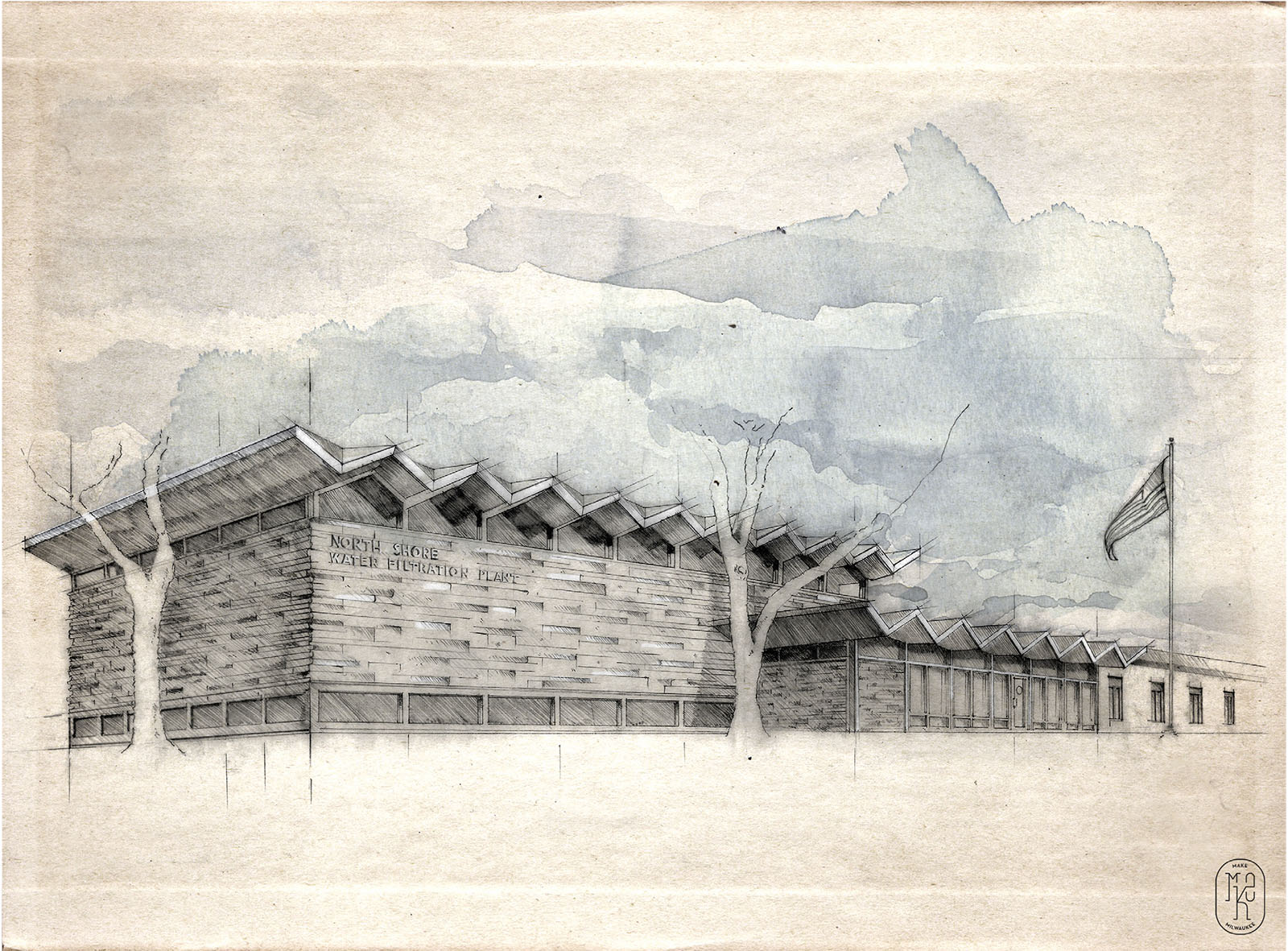 What attracts you to the buildings you choose to draw?

There’s a few exceptions to the selection process. There’s been a commission or two. Two were presents. The ones that were most by-the-book were the buildings that were mid-century, overlooked, yet had this inherent beauty.

The series started off with the War Memorial. With all of the grandeur and flamboyance of the Calatrava, the War Memorial quietly sat on its perch. What’s not to love? The Boy Blue stand is another example of this small gem that has long been abandoned but you can still see how cool it must have been when first built.

Many of these buildings have similar stories. The design process, especially for buildings, is a long and grueling process. Architects and designers, in some way, need to fall in love with their projects to stick with it through the end. I can’t help but appreciate that.

What do you hope to convey in the drawings?

In the past I’ve described these drawings as love notes to Milwaukee. It’s a tad overdramatic but there’s a grain of truth to that. It’s easy to overlook what’s great about this town when you see it every day. Just like it’s hard to see progress when you’re in the storm. It’s often necessary to take yourself out and look objectively at yourself, your life and in this case your town to appreciate what’s cool or what’s interesting or fun.

So selecting buildings that are sometimes completely overlooked, yet are still quite beautiful, taking the time to render them in a way few have seen, is my way of turning a mirror to Milwaukee.

Do you have favorite buildings?

I don’t. Well, not really. They’re a little like favorite songs. You experience it. You fall in love with it. They come and go. Sometimes when you happen upon the song, you fall back in love again with it and remember why you thought it was so great. Each of these buildings are a little like that. The list, like favorite songs, is long and varied. I get so happy when I find a new building.

I do have favorite stories.

The Lakeshore Drive residence (in Mount Pleasant) is the only house I’ve drawn – (it) feels a little creepy if it’s a house. I drew it as a Christmas present for my wife. That house – a John Randal McDonald house – was one of the main inspirations that led her to architecture school. When I decided to draw it, I needed a photograph to work from. The house could not be photographed. There was only one photograph on the internet on the Wisconsin Historical Society’s website. It didn’t have the best resolution. 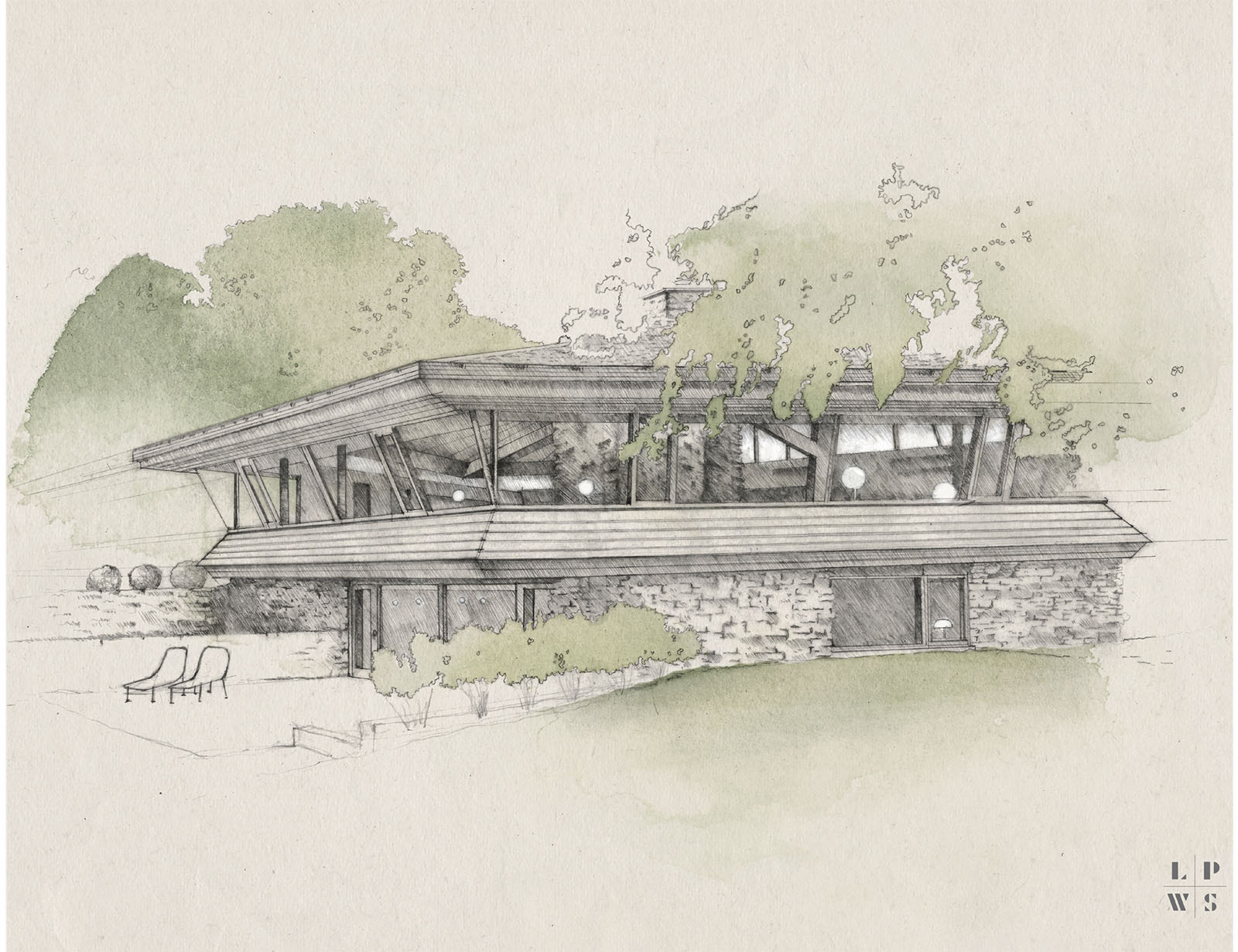 When I was about to quit the search, I noticed this one line that mentioned David Erikson, McDonald’s last apprentice. In a last ditch effort, I called Mr. Erikson and he turned out to have all of this information, photography and even newspaper clippings about the house. It meant a lot to my wife.

Hal Mason – the father of Libby’s childhood friend; still friends! – commissioned John Randal McDonald. Hal worked at Johnson Wax when they worked with Frank Lloyd Wright. He is passed and the property is out of the family, so meeting Mr. Erickson was piecing a very important part of history together for Libby.