After spending less than an hour touring around the Christmas-decorated house, the visit was already well worth the small cost of a ticket.

Despite living just down the street from the Captain Frederick Pabst Mansion, 2000 W. Wisconsin Ave., I had never been inside. After hearing it was decorated for the holidays for its annual A Grand Avenue Christmas display, I thought what better time than now to take my first tour?

After spending less than an hour wandering around the house, the visit was already well worth the small cost of a ticket.

The Pabst Mansion has been nationally recognized and set the scene for numerous holiday parties and festivities. The house was completed in July 1892 and is now one of a few surviving residences from when Wisconsin Avenue was called Grand Avenue.

After walking through the front doors and immediately admiring the architecture, Christmas wreaths, lights and antlers hung from the main chandelier, I was greeted by friendly volunteers who were knowledgeable about the mansion and pointed me in the right direction for the self-guided tour of the house. The volunteers are present on all three levels of the house and are eager to answer your questions. 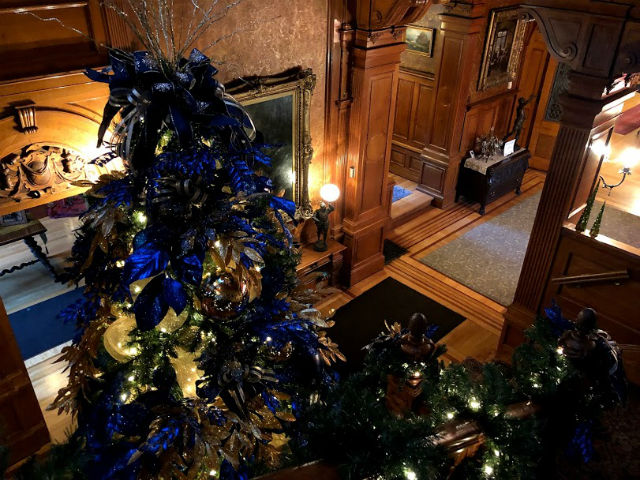 At each room, there is a sign in a visible location telling you the name of the room and who decorated it. You then look at the self-guided tour pamphlet to find the corresponding room and learn a little about the history of the room, such as how the border tiles in the bathroom are original and how the rooms were originally furnished.

Besides the initial holiday decorations, there are Christmas trees in nearly every room. The only rooms where there aren’t trees are the smaller rooms and some bathrooms – but even then, most of the bathroom sinks and bathtubs are adorned with Christmas ornaments in the basins. Garlands adorn the grand staircase. 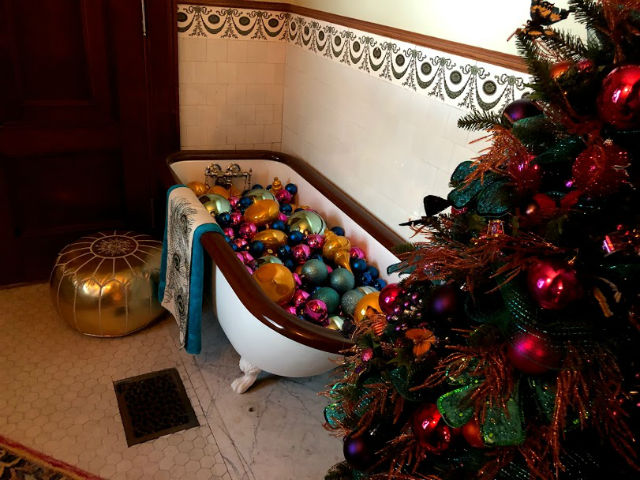 While the trees were historically inaccurate with the modern, sometimes LED lights hung on the plastic trees – which themselves were artificial and colored – they were still a very festive and pretty addition to the rooms. 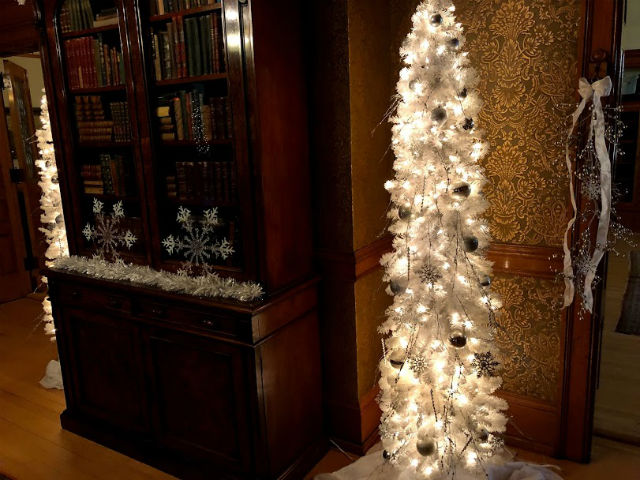 I enjoyed seeing the old fashioned servant’s dining room, which was the closest thing to a kitchen in the Mansion. The decor is Dutch influenced, and some faux cakes are on display in the cabinet. The original kitchen was eliminated to house the modern elevator added to assist those in need.

My favorite room, however, was probably the music room, with all of its beautiful Italian Renaissance style architecture and decor. Everything in the room seemed to match a color palette perfectly. The fireplace probably made it a cozy room back in the day, and the piano probably got well used for classic tunes. 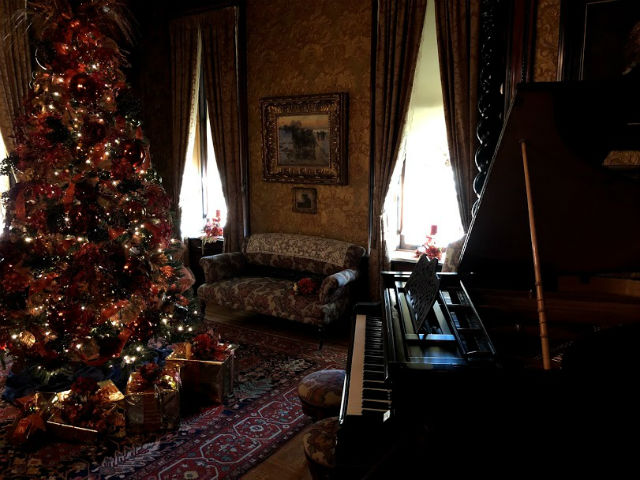 I could tell a lot of work was put into decorating, which was much appreciated. The whole house is already beautiful by itself, but with the Christmas decorations, it's even prettier.

I almost wish the pamphlet was updated for the holidays because I wanted to know if it would be historically accurate to have a tree in each of the Pabsts’ rooms. I also wondered if some of the toys in Elsbeth’s room were original. Elsbeth was the Pabst’s first granddaughter and who was adopted by them.

I also wondered about some of the weird alcoves – for example, the space in Gustave and Frederick Jr.’s bedroom on the third floor. Was it a room for answering phone calls? A time-out room for when you were in trouble? Next time I visit I’ll have to ask the staff to get these questions answered.

Be sure to check out the mansion for yourself this holiday season, but remember to make a reservation ahead of time.