We reached out to Paul Bartolotta with hope that he might be willing to offer insights: a clearer picture of not only the difficulties facing restaurants across the nation, but the vision and decision-making needed to create a future of hope.

It was 1993 when brothers Joe and Paul Bartolotta founded Ristorante Bartolotta, the first venue in what would eventually become a collection of well-known, beloved and respected restaurants in the City of Milwaukee and beyond.

Just over 25 years later, and those restaurants – like so many others – are standing on a precipice. The unprecedented damage of a yet unresolved pandemic has brought much uncertainty to the proverbial table. And, as restaurants across our nation make decisions about their futures, folks like Chef Paul Bartolotta, owner and co-founder of The Bartolotta Restaurants, have a great deal on their minds.

We reached out to Bartolotta with hope that he might be willing to offer insights: a clearer picture of not only the difficulties facing restaurants across the nation, but the vision and decision-making needed to create a future of hope.

Here's what he shared.

"When I came back to Milwaukee in 2015 and Joe and I discussed our vision for moving The Bartolotta Restaurants forward, we decided that it wasn’t about expanding," starts Paul Bartolotta. "It was about reinvesting and reinvigorating our restaurants. And 2020 was going to be the year for that… and now...

"I think if this had hit my brother and I years ago when we just had our one restaurant with 50 seats… I’m not sure how we would have dealt with this. We were just kids. And the truth is, most of us in the restaurant world aren’t business people. We’re people who love making food and giving people experiences. And what gets you in the business is very seldom what keeps you in the business.

"What got us here are our hearts. We love caring for people, our guests, our community. And our hearts are out on those plates every day. And we’re being asked to make business decisions that feel really difficult. It’s part economics and business, and it’s part stewardship.

"Unfortunately, if we want to get back to where our hearts lie, we have to make all sorts of decisions that don’t feel good." 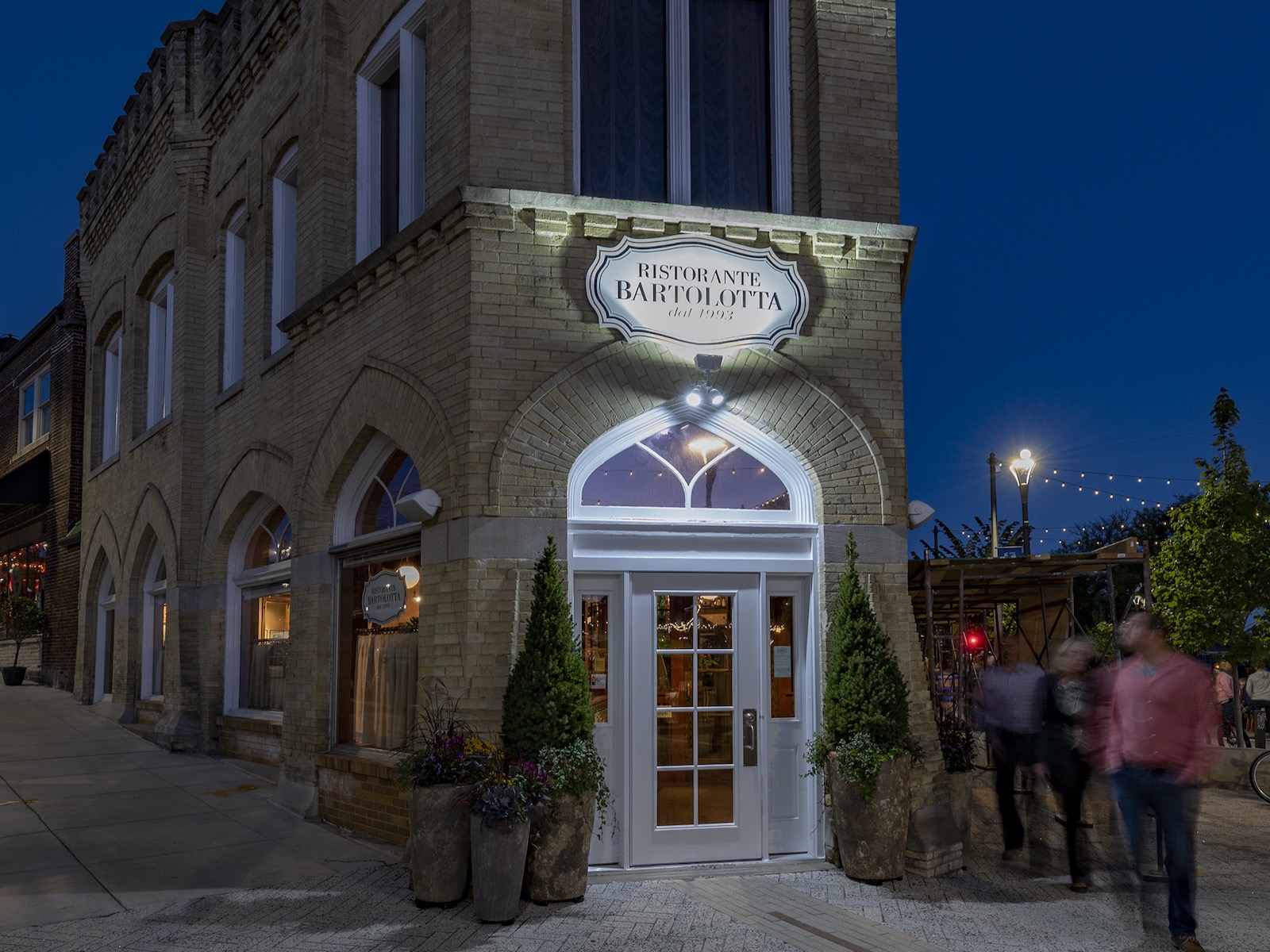 One of the first tough decisions the Bartolotta Restaurants made was to close their restaurants entirely, effective March 19. It was a decision which surprised many, and one which wasn’t made lightly.

"It was painful," Bartolotta recollects. "And I hope we never have to go through something like this again. We’ve been through hard times before, after 9/11 and during the recession. But it was nothing like this. That was like kindergarten in comparison.

In the early days of the pandemic, Bartolotta says he spent a lot of time talking with colleagues, particularly those connections he’s made in Italy, which experienced a peak in COVD-19 cases well before the U.S.

"Even more, when I talked to them about what we were doing, and about curbside service, they told me I was crazy. And I realized then… this is where America is missing the point. Even while we were doing curbside service, and taking all the necessary precautions, there was still so much interaction between our staff members… it didn’t feel right."

"So we closed. And I asked myself, what’s important to me right now? Taking care of people. What do they need? We made the decisions from there. We furloughed our hourly employees. And we provided pay and health benefits for our management team."

Bartolotta's also gave away all the food from their 17 restaurants to their employees, and they set up food pantries at a number of restaurants which offered a supply of food for employees who continued to need it.

"It wasn’t perfect, but it helped," says Bartolotta. "And once we had cared for our people, we looked to shoring up our financing. We pride ourselves for being good partners, so we explained our strategy to vendors. And this is so important. Even when you don’t have money to pay the bills, it’s important to answer vendor calls and talk to them… let them know that you have a plan.

"We also applied for PPP loans, which we ultimately decided that we’d need to convert to debt. We took pay cuts in an effort to slow the drain. And we began clearing up our debts and negotiating terms for extended payment." 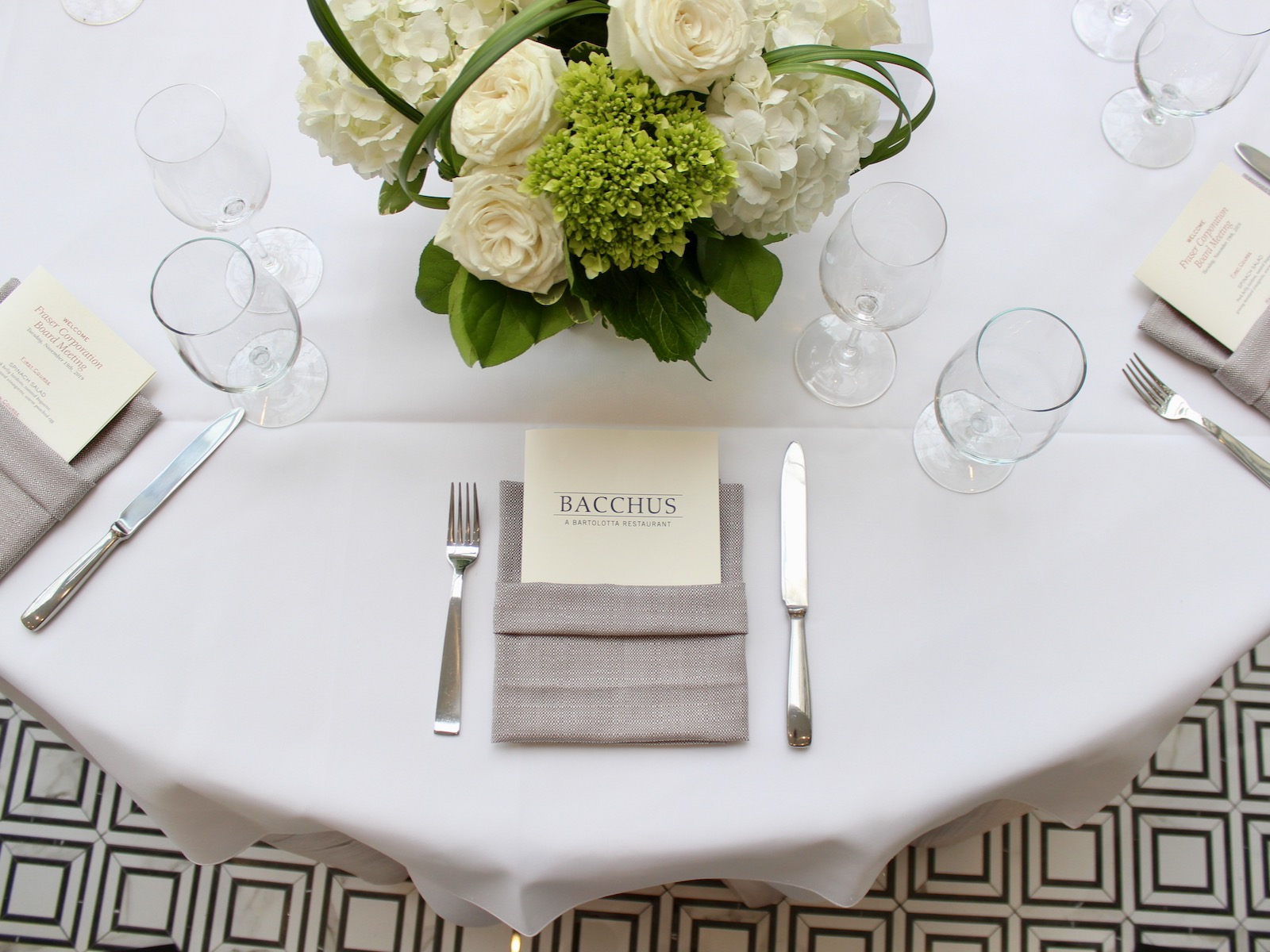 But there were more tough questions ahead. And many, Bartolotta says, required their leadership team to grapple with the balance between prioritizing people and balancing the bottom line.

"Right now we’re all being asked to make a lot of difficult decisions. How can you be a business like ours where it’s all about serving people and being a team and being hot and busy and stressed and still do it with a smile? I’ve always said that all of us in the industry probably have a few screws loose… but that’s the heart in all of us showing. This isn’t a business that just anyone can go into. You have to be all in.

"Our culture is all about "yes." It’s about saying yes to customers’ needs and yes to the experiences they want to have. And none of that has changed. In part, we say yes to customers, and we bend over backwards for them, because there is such insecurity that they will never come back. But it’s been difficult at times to balance that yes with something that’s also good for the company.

"For example, food costs have gone up. So have the costs of labor and benefits. They’ve all gone up. The vibrancy of our city has also increased the cost of rents. And as these costs go up – and you consider costing for the food – there are still thresholds that you can’t overstep. And that means restaurants have kept their prices down and saved money in other areas. And the math doesn’t come out.

"What has happened across the industry is that the cost of doing business has outpaced the check average. And much of this has to do with customers’ perceived value. It’s tough to charge what we probably should be charging because most customers don’t have any idea what that should be.

"Right now, the entire supply chain has been impacted, so we are definitely looking at higher costs in terms of food. But exponentially increasing pricing while you’re trying to reopen is an exponentially dangerous proposition. As consumers have developed an increased interest in food, they are looking for more and better. But they still will only pay so much for their dining experience.

"We like to think of our brand as being high end and reliable. We’re not the cheapest, but we’re also not the most expensive places in town," he adds. "We are also cautiously optimistic that our brand has a history and reputation enough that we won’t be forgotten as Milwaukee ventures out to restaurants again." 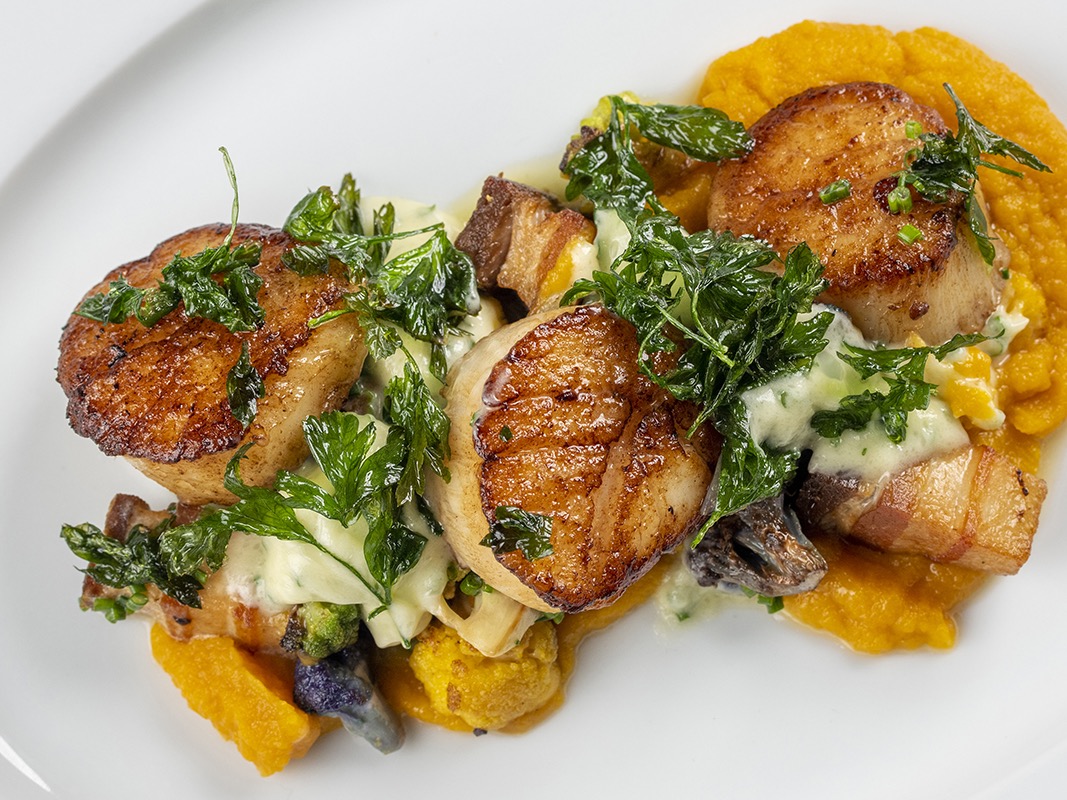 The risks and rewards of reopening

In recent weeks, Bartolotta says they’ve been spending most of their time looking at how to reopen.

"Let me be clear, no one wants to be back in restaurants more than me and my staff. But why make small plans? We need big plans. Smart plans."

"A safe and prudent relaunch with thoughtful execution is the only way out of this. And we’re nowhere near the end of this yet. My employees stimulus package runs out at the end of July. And that weighs on me every day. But I’ve also been following the Gallup polls, and as of 10 days ago, 73% of the population was uncomfortable with the idea of dining out in restaurants."

"I’m no Aaron Rogers, but I’m going to get out on the field. I don’t want to be the first boat in the water, but I don’t want to be the last. I want to survey the territory. I can’t afford to throw a 10-yard pass; I need to throw a touchdown. We have practiced good financial stewardship. But we don’t have the financial liquidity to open and close and open and close again. We need to open and stay open.

"Because we’re so big, our risks are high. So, we’ve spent a lot of time working on the not-so-fun part of the business so that we can get back to the fun part. We’ve also done a lot of work on technology, culinary labor and productivity modeling. We’ve remodeled all of our economic formulas because multiple restaurants running in the red isn’t feasible. And even though we’re a tankard in comparison to some, we really need to move forward more like a jet ski.

"Despite rising costs," Bartolotta says. "Reopening won’t be about making money. It will be about not running into the red and maintaining our ability to pay our vendors." 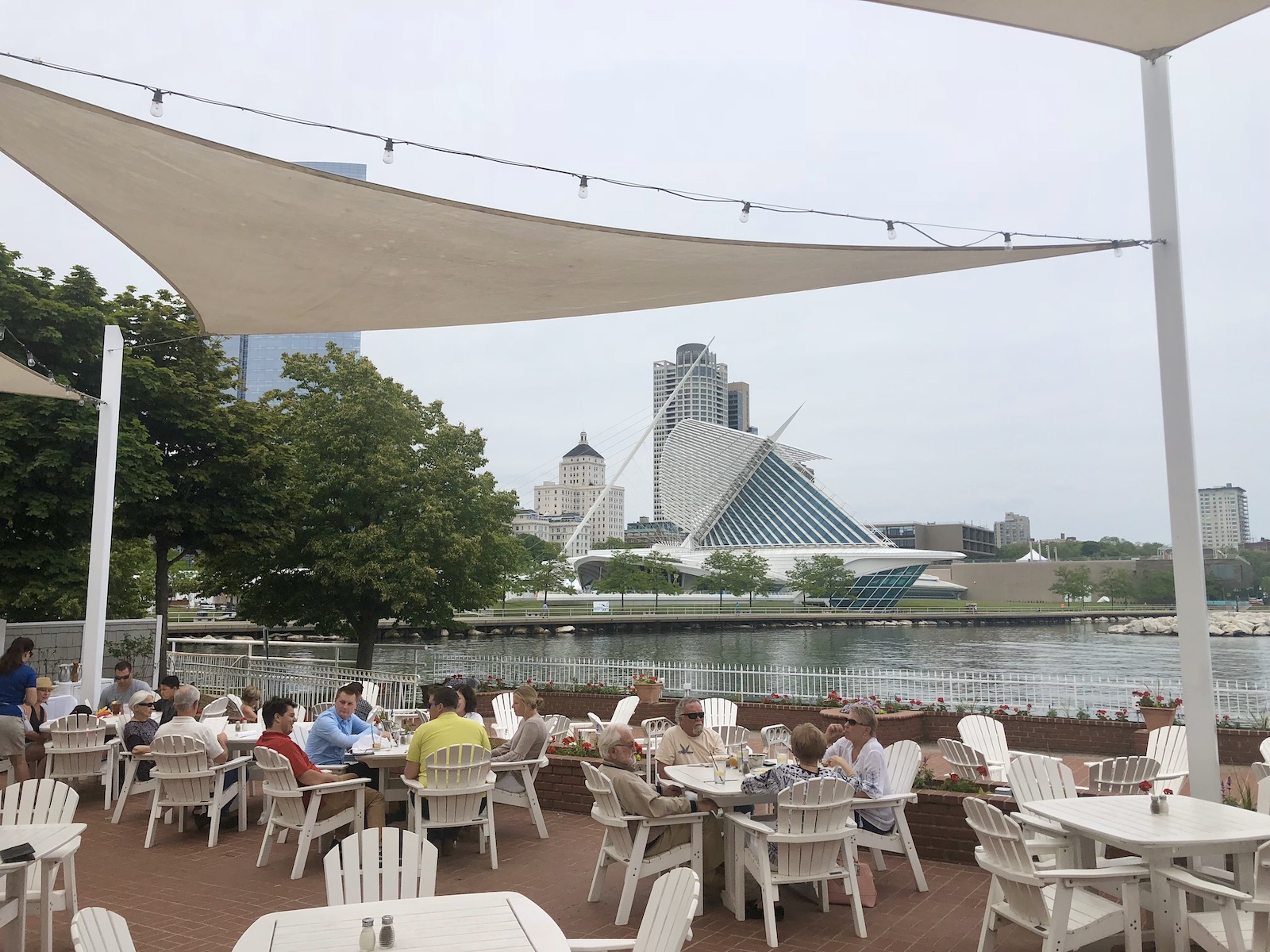 "A big part of the picture is getting our teams back. I want to rehire as many people as we possibly can. And we’re going to do that as much as possible because human capital is our most valuable asset. Our people are central.

He’s also clear that the way forward may not be straight.

"Let’s be clear here, there’s no roadmap to work from here; there’s just years of accumulated knowledge. As we prepare, we’ve spent time looking at a variety of options that both optimize labor costs and provide variety for guests, from pre-fixe menus to smaller greatest hits menus."

Bartolotta says they’ve also looked over their long list of assets and set their goals on utilizing as much patio space as they can.

"We have beautiful patio spaces at many of our restaurants," he says. "And we’re going to rely heavily on those. Our hope is that guests will support us."

"In markets like New York, Chicago, San Francisco and Las Vegas they can easily seat tables at 9:30pm in the evening. We don’t see typically see that here. People tend to eat early.

"So, if I had to ask something of our guests, it would be that they consider dining both earlier and later. That they entertain flexibility in this regard. Our patios are beautiful at 8:30 or 9 p.m. And people should take advantage of that.

While no finalized plans or dates have been announced for opening up any of The Bartolotta Restaurants, Bartolotta says he has hope that a phased approach to opening will provide the company for more solid footing in the days ahead.

"If all goes well, our margins will remain low, but we will be able to get a bit of circulating cash flow that allows us to step up our game as we move forward.

"If there’s anything we’ve learned from this, it’s that you should be strong in your mission, but not too proud to put your ear to the ground, listen, process and be fluid enough to pivot. This is about moving quickly and smartly. It’s about surviving."