Take time for a perfect weekend in Lake Geneva

It's been a long time (too long) since I've taken the opportunity to get away for the weekend. But, a recent trip to Lake Geneva - after which I found myself considerably more relaxed - made me seriously consider why I don't do it more often.

It’s been a long time (too long) since I’ve taken the opportunity to get away for the weekend. But, a recent trip to Lake Geneva – after which I found myself considerably more relaxed and nearly ready to start another busy week – made me seriously consider why I don’t do it more often.

The trip was largely a last minute effort, most of which was thrown together in less than a week’s time. But, thanks to great advice from a few friends who grew up in the area, along with a bit of help from Google, we were able to create an itinerary that was filled with just enough activity to be engaging, but not so much that we felt overwhelmed.

There are plenty of resorts, B&Bs and hotels to accommodate your Lake Geneva weekend. We opted to stay at The Ridge Hotel, which had recently undergone the second phase of its multi-million-dollar renovations, including a new lobby, restaurant, fitness facility and outdoor veranda.

The lobby was spacious, comfortable and modern, with plenty of spots for recharging phones and laptops. Had I been intent upon getting work done, I would’ve spent more time lingering in the comfortable chairs with a cup of coffee from the new Bean and Vine coffee and wine bar. 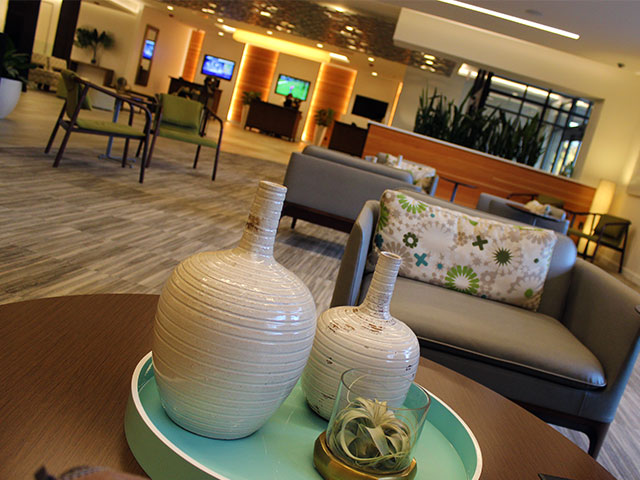 Rooms, which are on the docket to be upgraded during the next phase of renovation, were still clean and comfortable with recently upgraded bathrooms. 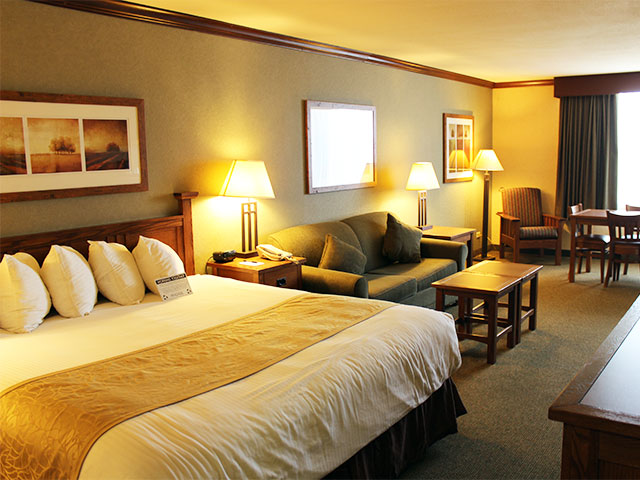 Amenities include both an indoor and outdoor pool, a fitness facility and a spa featuring services including mud and herbal wraps, reflexology, facials and mani/pedi services. Complimentary bikes are also available for guests’ use. 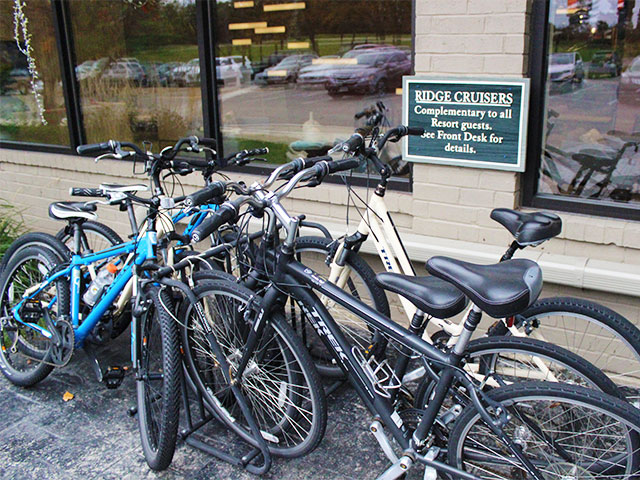 Once we’d checked in at the hotel, our weekend began in the most relaxing way possible – with a Friday afternoon trip to the Clear Waters Salon & Day Spa located in Williams Bay (the Ridge Spa was booked), where my husband and I signed on for a one-hour couples massage.

I can’t say we were particularly relaxed when we arrived. But, thanks to a complimentary foot soak and cups of chamomile tea, we found ourselves slowly slipping into vacation mode. 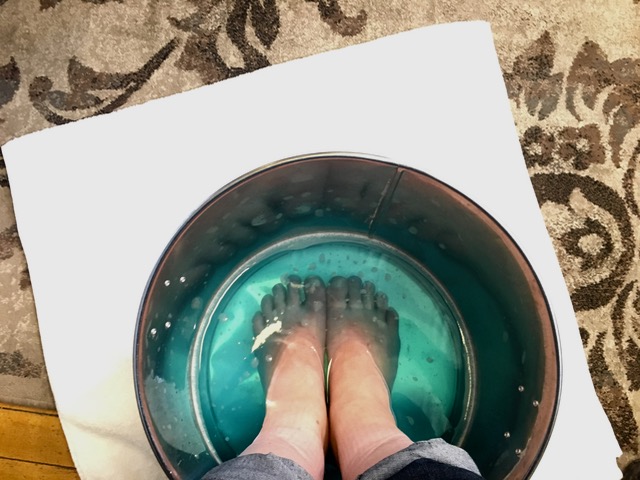 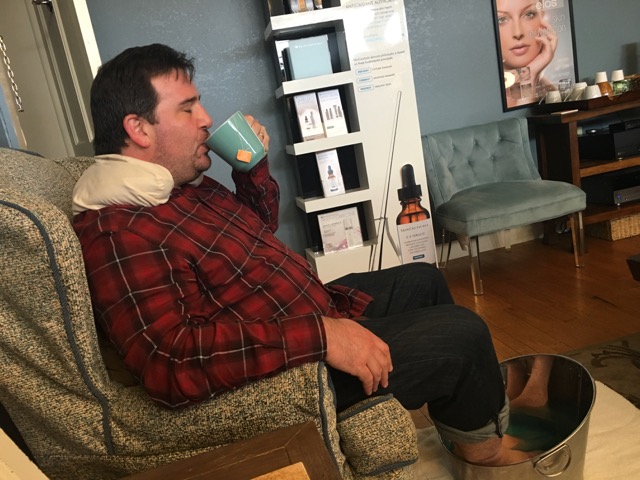 In fact, by the time I cradled my face into the pillow on the massage table and inhaled the aromatherapeutic oils I was offered, my mind was relatively free of its usual chatter, leaving me free to relax and enjoy. Even better, thanks to the deft hands of my very responsive masseuse, I left just over an hour later feeling better than I had in weeks.

We had a bit of time to relax at the hotel after our massages, so we grabbed a cup of coffee from the Bean & Vine coffee and wine bar, which not only offered up a full menu of coffee and espresso drinks, but also a case of sandwiches, fruit, snacks and a modest selection of wine and beer, a convenience I’d love to see in more hotels. 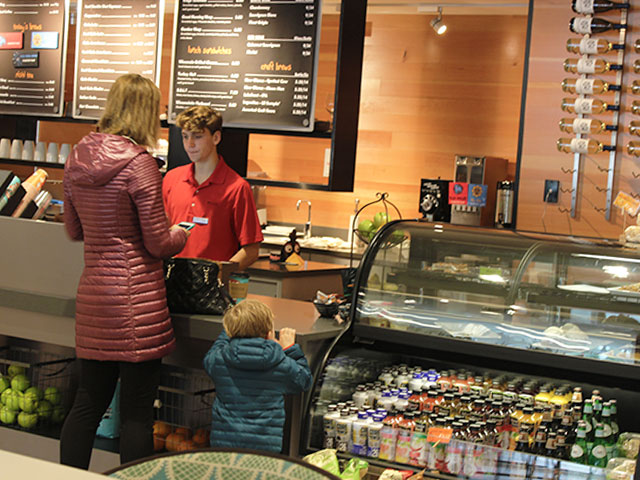 When dinner rolled around, we opted to try out Crafted Americana, the brand new restaurant concept at The Ridge which boasts an artisan approach to dining "from premium ingredients and curious combos to locally sourced fixings and uncharted flavors."

A nice crowd had already gathered by the time we arrived for our 7:30 p.m. reservation. There was live acoustic music at the bar, and we landed a comfortable window-side table that offered up a lovely autumnal view of the hotel courtyard.

Though most diners were feasting on Crafted’s classic Friday fish fry, which looked delicious, we thought we’d break out of the mold and try a few of the other offerings, which – despite the proclamation of "curious combos" – erred largely on the side of standard comfort food fare.

A generous charcuterie board ($15) was chock-full with prosciutto, capicola, house bacon, gorgonzola, cheddar, aged balsamic, mustard and fig jam. It paired well with the house bread (a sweet walnut-laden loaf) and butter, which was delicious enough that I dreamed of getting a hold of a loaf for days afterwards.

Another win was the well-executed plate of tender short ribs ($24), which were served with parsnip puree and roasted root vegetables. Delicious comfort food fare, for sure. 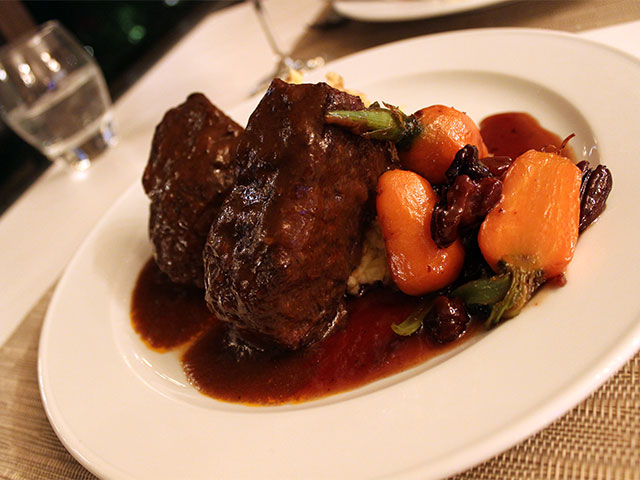 Meanwhile, duck breast with saffron risotto ($26) felt like a bit of a work in progress. The risotto was toothy and flavorful and the duck perfectly cooked; but the copious port glaze erred a little on the too-sweet side. 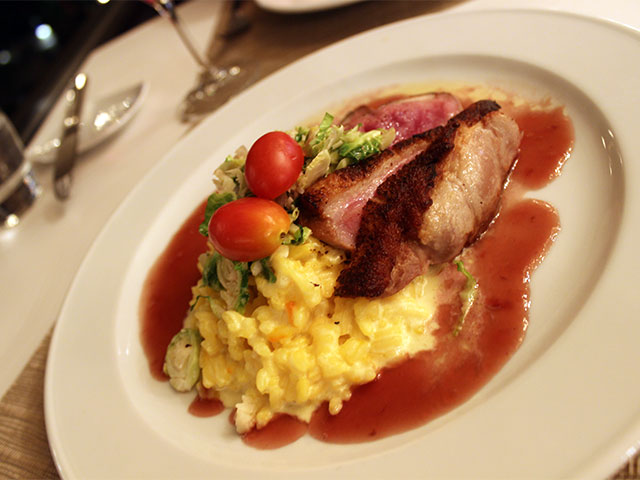 After dinner we spent a bit of time outside, checking out the new outdoor lounge, which was equipped with a fire feature to ward off the evening’s chill. 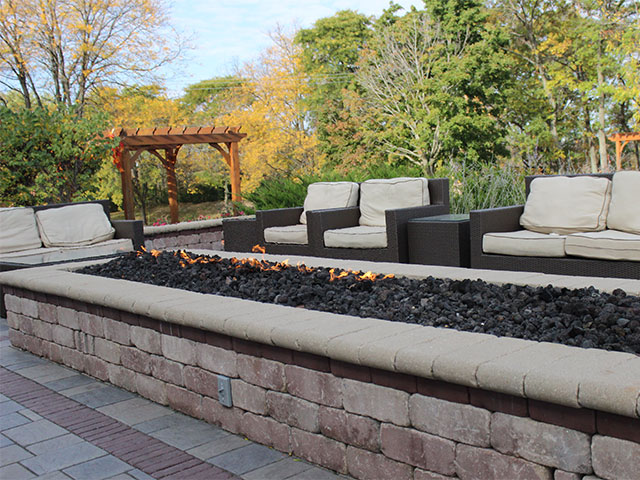 Breakfast the next day was also enjoyable. The coffee was steaming hot, and a classic menu offered options like pancakes, omelettes and oatmeal. We opted for the "Breakfast Mess" with hash browns, sausage, eggs and cheddar. It was delicious and filling. 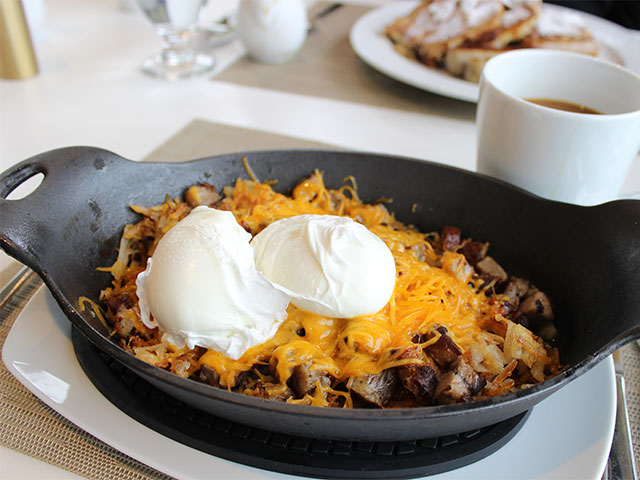 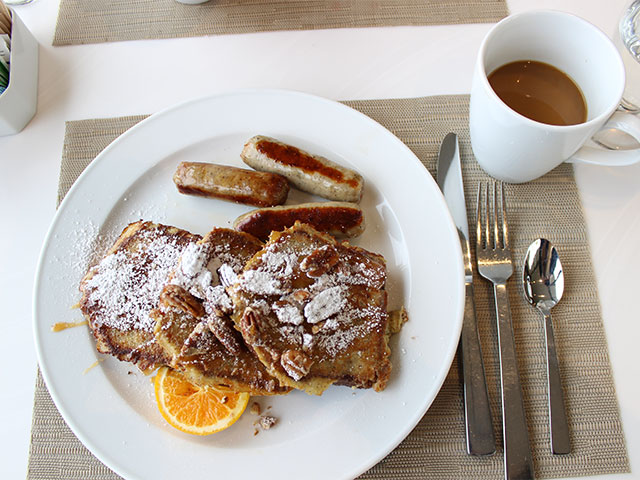 Once we were sufficiently powered up from breakfast, we headed out on our next adventure: scooter rentals from Scoot Jockeys. We opted for a half-day rental ($69), which included scooters, fuel and an introduction to scooter riding.

Since we’d never tackled scootering before (and I was a bit trepidatious about the prospect), we were grateful for the thorough training session from Sherm and Lynnette, both of whom took their time making sure that we were comfortable operating the scooters before sending us on our way. They provided maps for two great escapades – one easier route that took us on less busy scenic roads and another which led us around Geneva Lake. 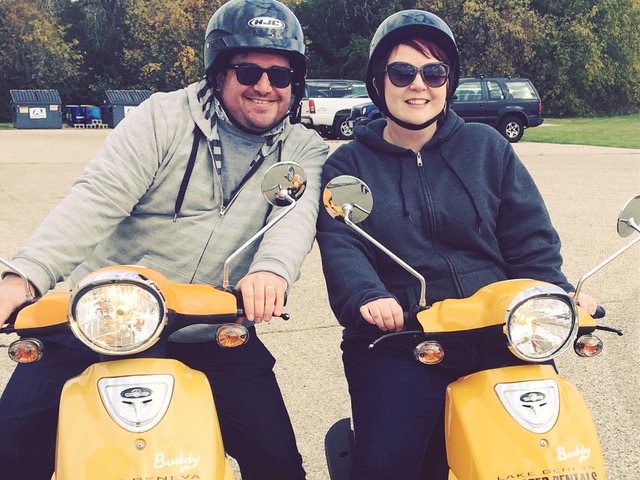 The roads were winding. The scenery was breathtaking. And I can cross another fun item off my travel adventure bucket list.

Our scooting adventures took us to Yerkes Observatory, an astronomical observatory located on 77 acres of park-like land in Williams Bay. It’s operated by the Department of Astronomy and Astrophysics at the University of Chicago and includes a variety of opportunities for fantastic scientific geeky fun. We didn’t arrive in time for a tour, but we toodled around on the lovely grounds for a bit, taking in the beauty of the gorgeous historic architecture. 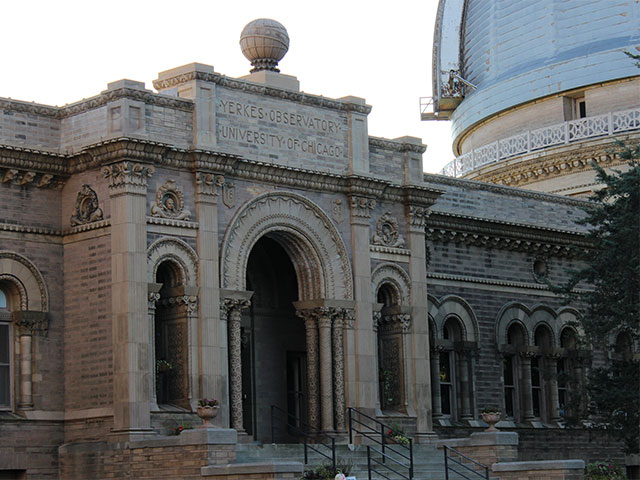 In Fontana we stopped off at Chuck’s Lakeshore Inn, a quaint bar on the west side of Geneva Lake. 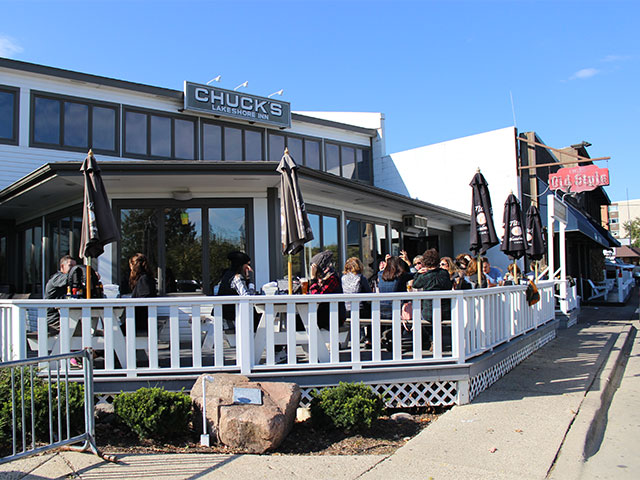 There we refueled with a pint of beer and an order of "soggies," a local specialty (and supposed hangover cure) featuring cubed French bread soaked in Italian beef jus with melted mozzarella and giardiniera ($5). 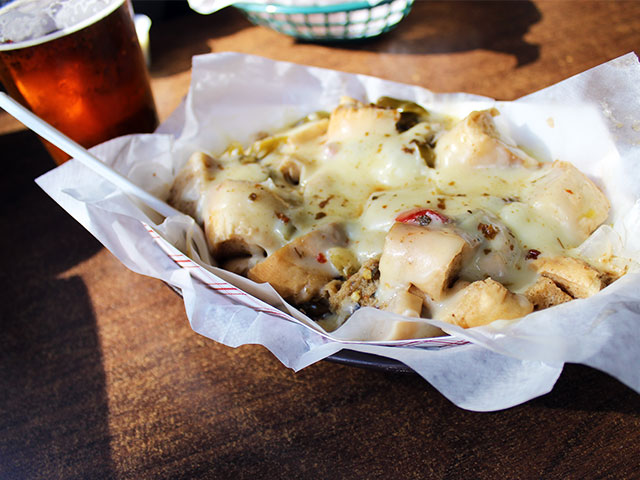 Later in the day, once we dropped off our scooters, we also made a pitstop at Geneva Lake Brewing Company, a micro-brewery with a quaint taproom where we sampled a flight of brews including Implosion IPA, Oktoberfest Ale and Imperial Cherry Stout. 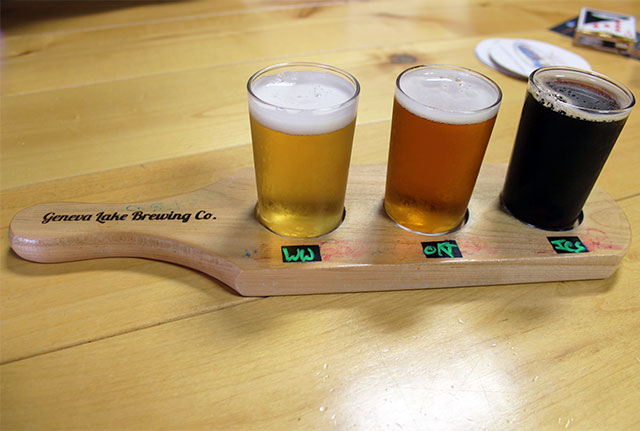 If I had it all to do over again, one experience I would have made more time for is hiking the 21-mile path around Geneva Lake. We did manage about an hour of hiking near Williams Bay, during which we took in a small percentage of the sights and sounds. But, I’m eager to head back to experience even more, and here’s why. 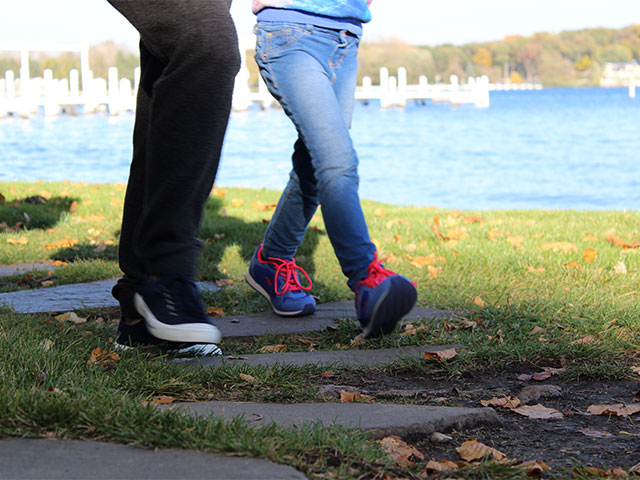 The path might well be one of the area’s oldest traditions.The path is said to have originated as a trail leading from one Potawatomi village to the next; but, despite European settlements around the lake, the path has remained. In fact, by law the trail must be maintained by all lakefront property owners and remain open to the public. Each lakefront estate’s portion of the path is uniquely landscaped, and you can also enjoy the varied architecture and views of private yards along the way.

There are also myriad surprises, including a mystery mailbox near Williams Bay where you can leave a note for others to enjoy. 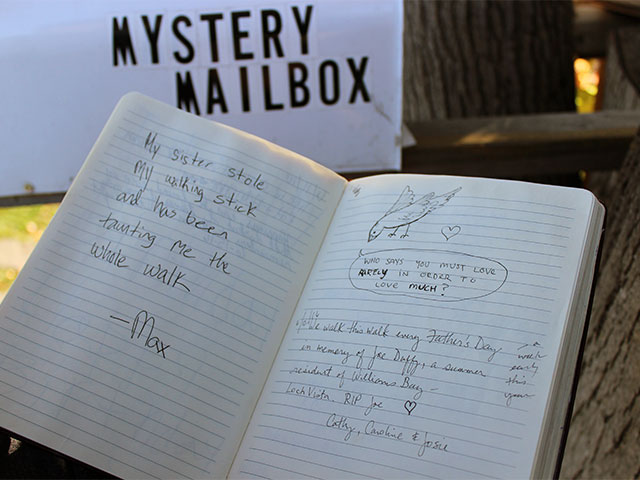 On your journey, you’ll pass through environments as varied as formal gardens, bricked pathways and rustic woodlands. Since the hike is self-guided, you can also take the opportunity to stop at a variety of zen-like oases with seating where you can rest and reflect.