Peanut butter isn't as healthy as most people think. It's a realization that led two young local entrepreneurs to launch a product they're billing as "The World's Healthiest Peanut Butter."

"A lot of people believe that peanut butter is healthy," says Sam Lepak, co-owner of Pintful Peanut Butter. "But 90-95 percent of peanut butters that are being consumed have everything from sugar to hydrogenated oils. So, what people are putting into their bodies isn’t as healthy as they think."

It was a realization that prompted Lepak and his peanut butter-loving business partner Evan Laird to launch a product they’re billing as "The World’s Healthiest Peanut Butter." 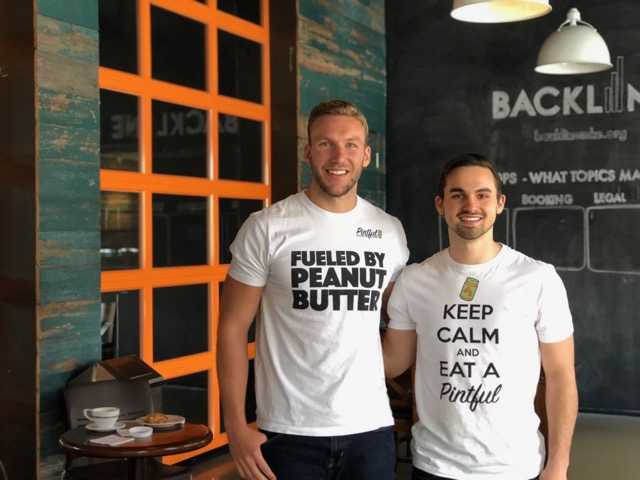 Both Lepak and Laird were raised in the Metro-Milwaukee area; they met while attending UW-Whitewater, where they were active members of the Collegiate Entrepreneurs Organization. And it was their shared passions for health, fitness and entrepreneurism that fueled both their friendship and inaugural business venture, a small digital marketing company that focused on taking brands to the next level.

But, as graduation approached and they recognized how saturated the digital marketing landscape already was, they found themselves looking at alternative business ideas to pursue.

"We’d actually both just finished reading ‘The 4-Hour Workweek’ by Tim Ferriss," says Lepak. "The book focuses on bringing efficiency to scaling a business and getting more results in less time, and it got us thinking about different products that we could scale up using the marketing skills we’d put into practice."

And then the light bulb went on: why not produce an all-natural, high-protein peanut butter?

Laird, a sports nutritionist and personal fitness trainer, says he’d been making his own high-protein peanut butter for the better part of a year.

Unfortunately, what Laird found as he looked more closely at the labels of major peanut butter brands is that his favorite protein-packed spread wasn’t filled with as much protein as he’d like. Instead, it was filled with any number of other things including added sugar, hydrogenated oils (transfats) and emulsifiers like mono and diglycerides (some of which come from animal sources).

It was a realization that prompted him to create his own peanut butter.

"When I made my first batch, I roasted the peanuts myself in the oven," he says. "And I ground them in my mom’s 1-cup food processor. From there, I started adding different things to improve the flavor and boost the protein content."

When he came across sprouted brown rice protein, a natural plant-based protein that also has a high fiber content, he realized he’d hit on something special.

"I’m not vegan," he says, "But I really focus my diet on more natural whole ingredients. And what I found is that most of the high-protein peanut butters on the market were made with dairy-based proteins, like whey powder. And most also contained enough added ingredients that they could no longer claim to be ‘peanut butter’ ... they had to call themselves ‘peanut butter spread.’"

Even better, it still tastes good.

"When we decided to start the company, we started by sampling out the product and asking people for their honest feedback," says Lepak. "And we were really psyched to find that even college students and people who didn’t eat natural peanut butter really liked the product."

"We’ve also found that it appeals to people across the spectrum," says Laird. "People often think that because it’s healthy, it’s not going to taste good. But, once they try it, people really like the taste and the texture. We’ve even heard from people who’ve told us that their children are crazy about it."

Among the nascent company’s early fans are numerous bloggers and social media influencers, primarily in the vegan and fitness communities, who have sampled the product and shared their favorite ways of using.

And it’s largely social media buzz that’s fueled the brand’s Kickstarter campaign, which has already reached 75 percent of its $10,000 goal with two weeks to go.

The campaign, Laird says, is accomplishing two things. First, it’s generating start-up funds for the brand, which will go toward equipment, certification and production costs needed to produce the initial run of the product. Secondly, it’s getting the product into peoples’ hands.

In fact, Kickstarter rewards all include Pintful Peanut Butter in some form, whether it’s Pinful Power Packs (single serving pouches) or 16-ounce jars, which can be had for as little as $11 per jar ($4 less than retail price).

"We’ve found that people really want to taste the product before they buy it," says Lepak. "So this gives them that opportunity. And, in addition to getting the funds we need to launch the company, we’re also proving that there’s a market for the product itself."

Once launched, Lepak says the product will be available online at pintfulpeanutbutter.com, as well as on Amazon. Meanwhile, they will continue to spread the word about the product using a combination of digital media strategies, in-person sampling and sales opportunities at area farmers markets, gyms and related events.

Ultimately, he says, their goal is to get the product into the marketplace through grocers like Whole Foods, Fresh Thyme Market and Trader Joe’s.

It’s been a wild ride for the young entrepreneurs.

"When people ask me what I’m doing after graduation and I say ‘making peanut butter,’ the response is pretty priceless," Lepak says. "Their ears perk up, and they’re actually excited. It’s really cool."

Laird nods. "Yeah," he says. "Three-year-old Evan would be really proud of me."