On Tuesday morning, Mayor Tom Barrett, Ald. Bob Bauman and other dignitaries gathered to cut the ribbon on the newly dubbed Postman's Porch, a pocket park that since its inception in 2016 was called Postman's Plot.

On Tuesday morning, Mayor Tom Barrett, Ald. Bob Bauman and other dignitaries gathered to cut the ribbon on the newly dubbed Postman’s Porch, a pocket park in the shadow of the Germania Building that since its inception in 2016 was called Postman’s Plot (and, sometimes, Postman Park).

Three years ago, the triangular island bordered by Wells Street, Plankinton Avenue and 2nd Street, was transformed into Postman’s Plot, a pocket park dedicated to the founding of the National Association of Letter Carriers. 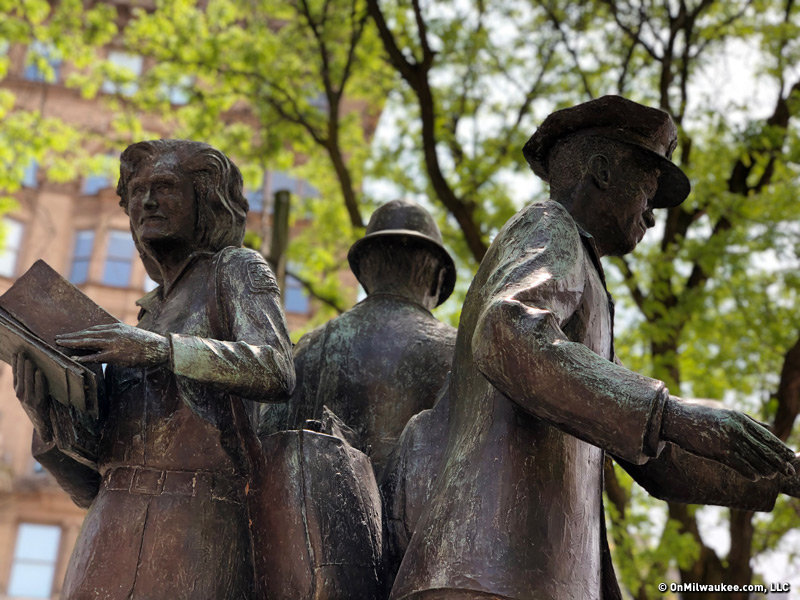 The dot of land is across the street from the saloon where, in 1889, the National Association of Letter Carriers was founded, according to the union's Wisconsin chair, Scott Van Derven, a former Downtown mailman.

The site was once home to a distinctively shaped tavern building that housed Cream City Brewing Company's The Triangle tap (razed in 1919) and, in September 1968, was where the "Milwaukee 14" burned draft registration records after storming the Selective Service System office in protest against the Vietnam War. 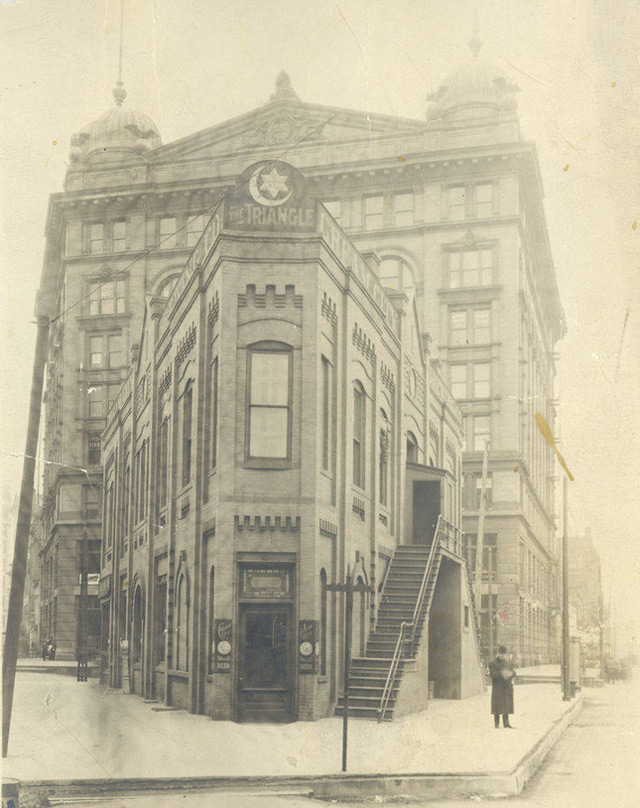 The original Postman's Plot was a collaboration between Main Street Now Conference and NEWaukee and artist Ryan Tretow, who designed the blue furniture. There was also a communal table, a small stage area and a large mailbox where visitors could leave letters for the city.

Today, with new concrete, updated landscaping, new furniture, additional trash cans and a dog waste station, the space is being programmed to serve as a meeting spot, from 7 a.m. until 7 p.m. 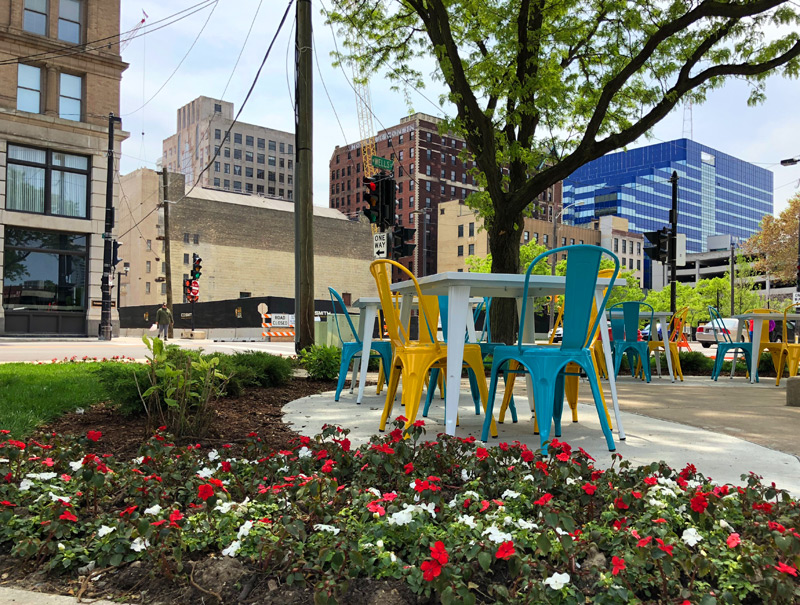 A monthly concert series, called Postman's Porch Unplugged, will kick off on June 25 (with other events July 23, Aug. 20 and Sept. 24) with live music, free food and beer samples from Rock Bottom Restaurant & Brewery from 5 to 7 p.m. Pete’s Pops will also be on hand selling popsicles.

And you can still leave free mail, this time in the form of Milwaukee-themed postcards, provided by VISIT Milwaukee, that will bear a commemorative Postman’s Porch stamp.

The blue furniture is gone, but the garden beds are planted with flowers and low shrubs, there will be a free book cart and performances by a brass quartet made up of members of the Milwaukee Symphony Orchestra, whose future home sits just across the street. 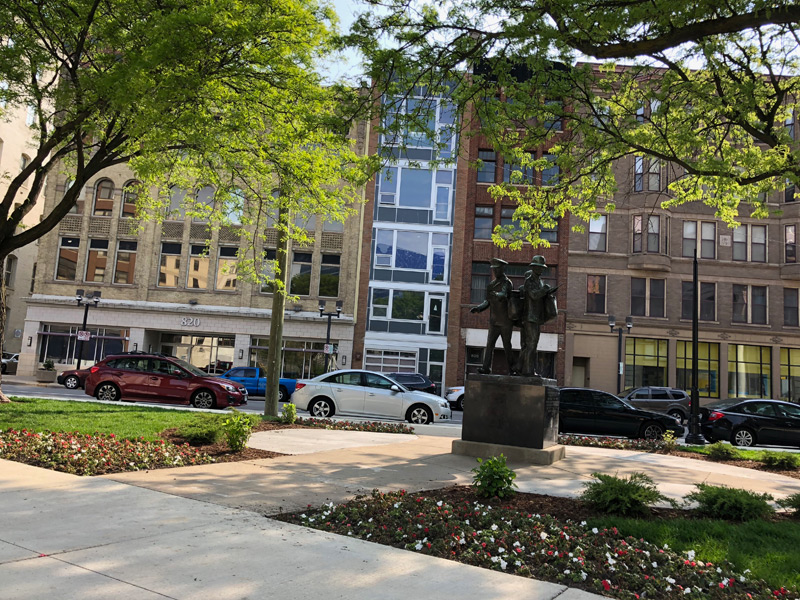 "Fostering social engagement in public spaces is a top priority for Milwaukee Downtown," said Beth Weirick, CEO of Milwaukee Downtown, BID #21, in a statement. "Postman’s Porch activates an underutilized traffic triangle into a place for the community to enjoy in the heart of Downtown." 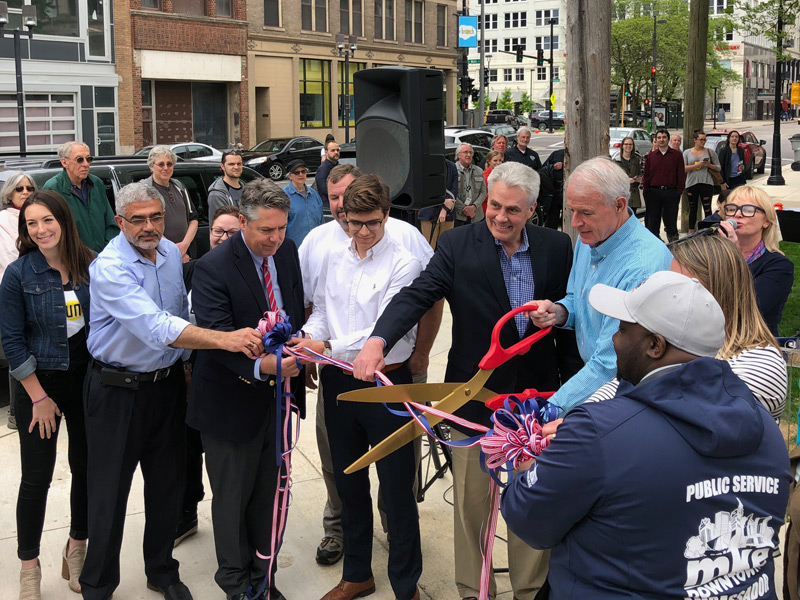 "It’s great to have so many people who want to activate this space to enliven the heart of the city," said Mayor Tom Barrett at the kickoff event. "(In order to bring growth to the neighborhoods) we need to have a strong heart. We have a strong heart here."