When Preservation Park was unveiled on the southeast corner of 10th and Juneau recently it marked the arrival of the second park near that intersection in the heart of the booming for Pabst Brewery neighborhood dubbed simply, "The Brewery."

When Preservation Park was unveiled on the southeast corner of 10th and Juneau recently, it marked the arrival of the second park near that intersection in the heart of the booming Pabst Brewery neighborhood dubbed simply, "The Brewery."

But don’t think for a minute that two parks is overkill. Preservation Park – adjacent to Best Place – is an open grassy square, with a sunken garden (pictured below) running along its southern edge and a historical walkway flanking it along Juneau.

Some street trees line the sidewalks on the park's north and west sides. 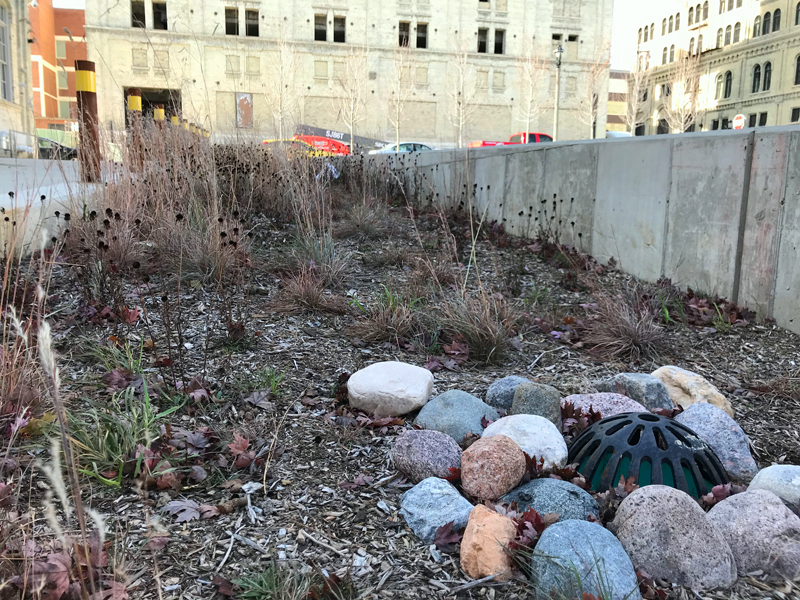 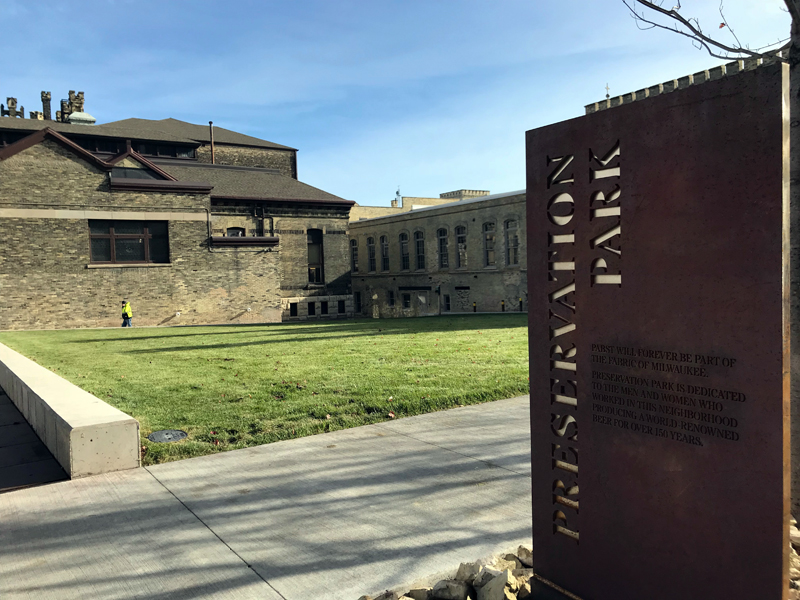 It’s a place to catch some rays or romp with your kids or your pup or have a nice picnic, maybe fly a kite. Across the street, halfway up 10th Street, next to the Brewhouse Inn & Suites, is Zilber Park, a real urban pocket park that has a completely different vibe.

Zilber Park – named for the late visionary real estate developer Joseph Zilber, who saw simmering potential in the neighborhood and put his money where his mouth was – has a completely different vibe. There’s almost no grass here. Instead, there are benches and trees creating a place to read a book, chat with friends, chill. 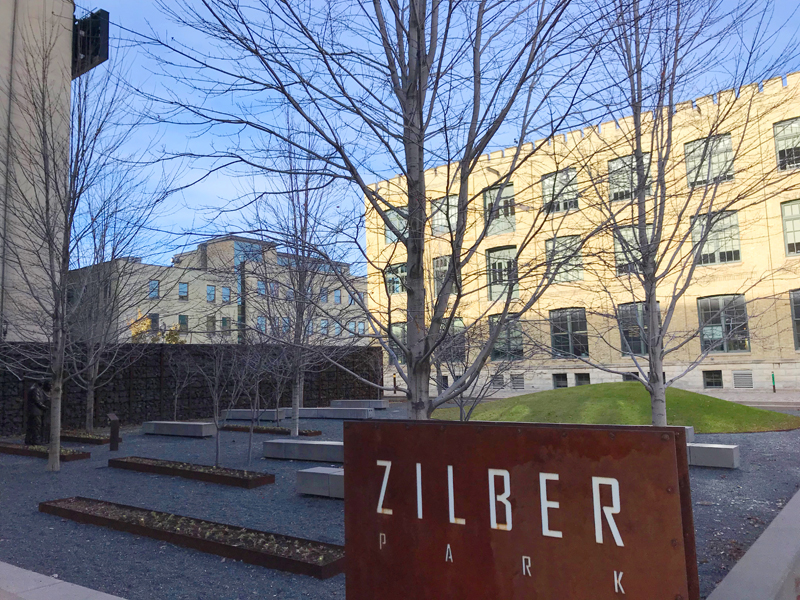 According to Zilber Property Group’s Dan McCarthy, the plan was always for two parks here to serve the quick-rising apartment, office, retail and hospitality developments.

"It was always part of our master planning for the neighborhood," he says as we stand on Juneau, looking at the ongoing development all around. "Any great neighborhood needs high-quality green space.

"So we programmed this and Zilber Park to meet that need."

While Zilber Park – which was completed in 2009 – is tucked into a nook between buildings, creating an intimate vibe, Preservation Park is wide open, making it feel larger than it really is.

It’s got a simple design. It’s basically a lawn, with that rain garden adjacent and a vertical metal sign on the corner. Perhaps its most unusual feature is the memory walk created using 23 corten steel panels that contain 14 artifact wells, illuminated with LEDs at night, that trace the history of the neighborhood.

The timeline is heavily focused, as you’d expect, on the brewery history of the area, and there are cans, bottles, mugs, photographs and other breweriana, along with etched notes like, "1970 – Pabst’s production more than doubles to 10.5 million barrels and in 1977 Pabst sells 17 million barrels, the company’s all-time record." 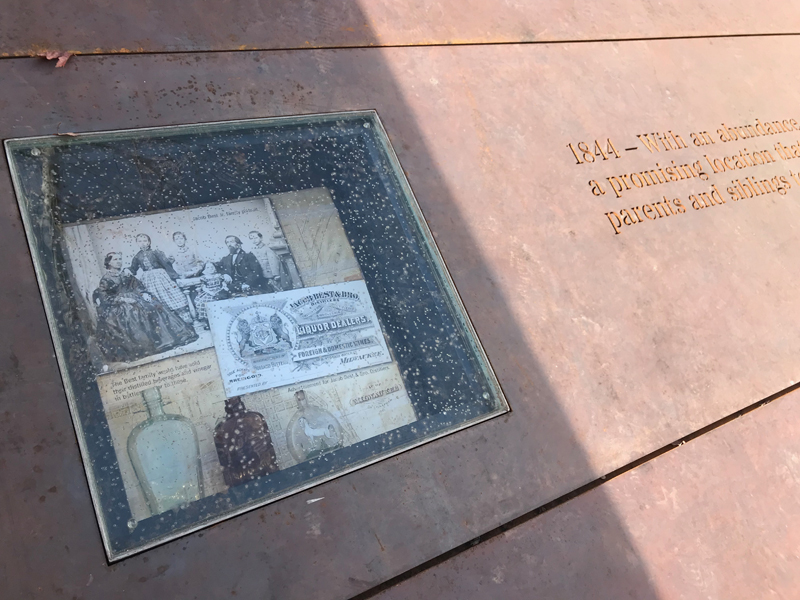 "The whole idea of putting artifacts in the ground and telling the story was actually an idea by the president of Brewery Project, LLC, John Kersey," says McCarthy.

"The cases are all different sizes, and we tried to make it a combination of images and artifacts. It's unique – I don't know of anything else, at least in Milwaukee, like this."
McCarthy says the memorabilia in the boxes – which are flecked with anti-slip bumps for safety – were drawn from a number of sources, including the Milwaukee County Historical Society, The Pabst Mansion and some private collectors. Each little artifact has a story which is kind of fun." 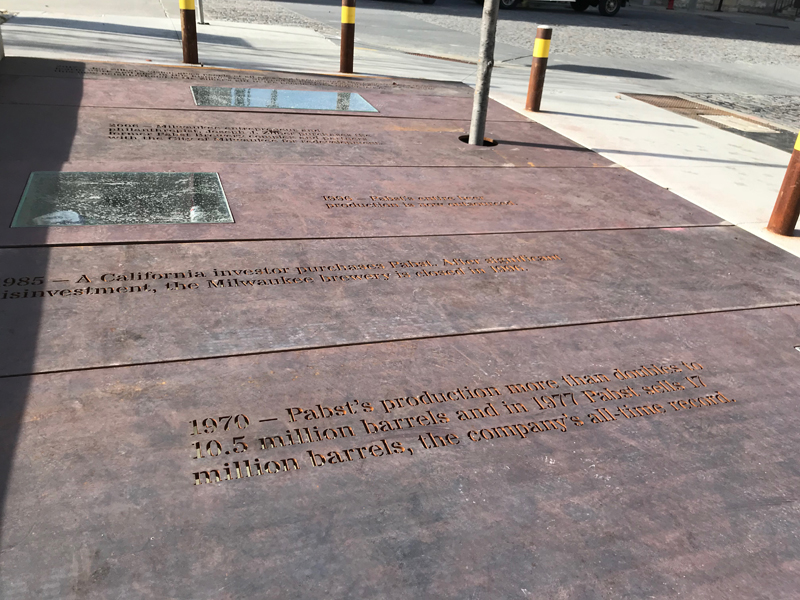 Zilber Group enlisted Auburn University Landscape Architecture Chair and Professor David Hill, and owner of HILLworks – who had also designed Zilber Park – to design the park and the timeline walk.

"He knew the area," says McCarthy. "He came up with the initial design concept, and we took that and enlisted the help of a number of professionals: Ascend Design, which helped us with making the boxes themselves, and a museum exhibit designer named Rick Regazzi (and others)."

McCarthy says that a lot of effort went into designing boxes that would protect the objects from the elements.

The park will be maintained by the local Neighborhood Improvement District, which will determine any programming uses for the park, though McCarthy expects it will occasionally be rented for private events such as weddings, as is the case with Zilber Park. 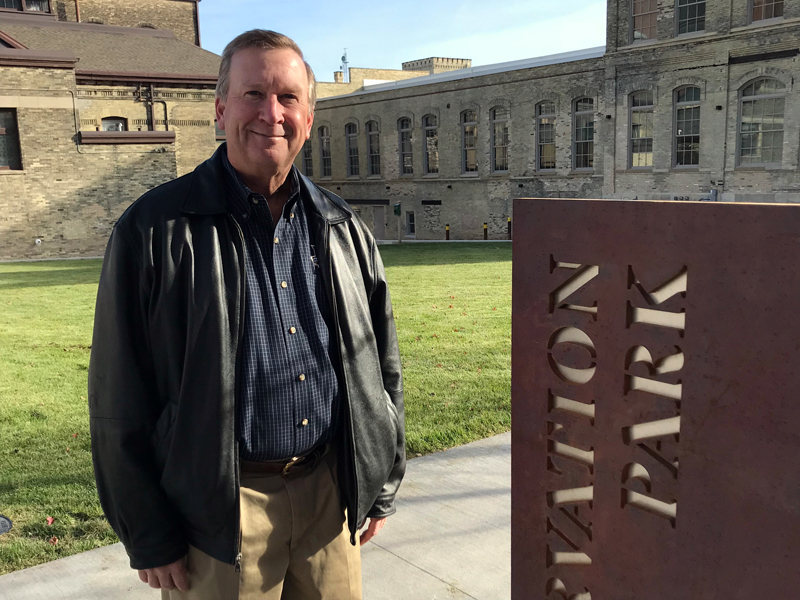 McCarthy (pictured above) hopes park users will look down at the faces on the photographs in the artifact tanks and remember the folks that worked and lived in the area in the past. The park, he says, is dedicated to them.

"What we think is really the most important thing is who this park is dedicated toward. Because neighborhood's been around for a long long time and one consistent factor has been the men and women that have worked here.

"Preservation Park is dedicated to those men and women who worked in this neighborhood, producing a world-renowned beer for over 150 years. We wanted the timeline to help reflect that." 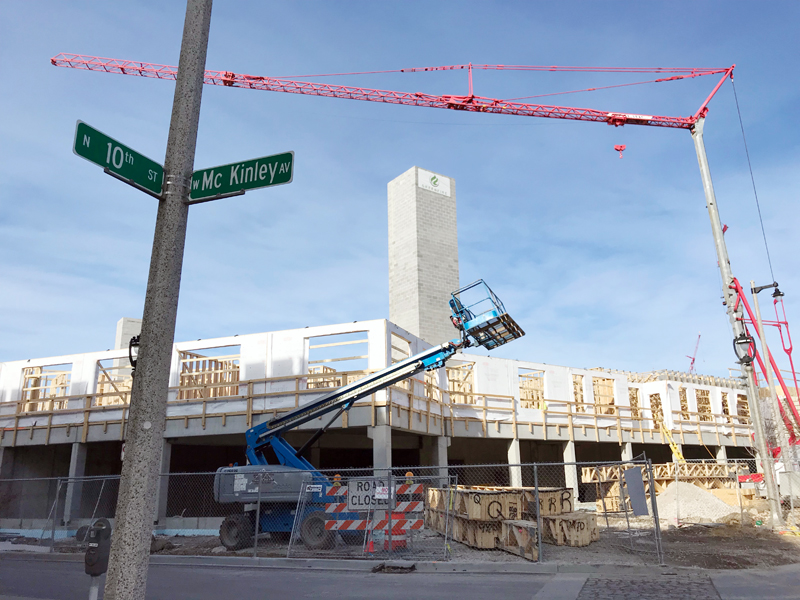 A block east, the former Pabst distribution center is being transformed into a new home for Milwaukee Brewing Co. and the formerly windowless fortress is now being opened up with big windows (see below) being installed on all sides. 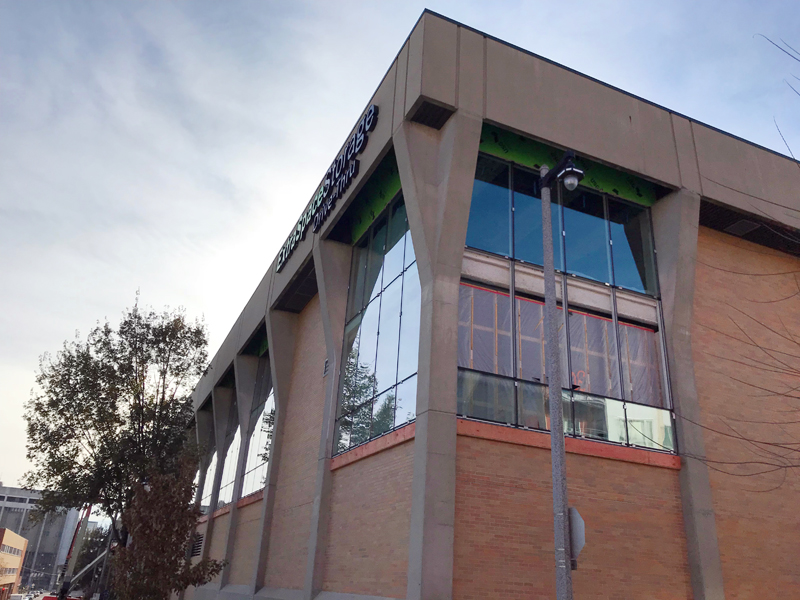 Just to the north, a new Hyatt Place hotel is under construction and is expected to open in June. Of course, just a bit farther east there’s a new Froedtert clinic and the Bucks training center, arena, parking structure and more housing on the way.

On 10th and State, the former St. Anthony’s Hospital is being converted into supportive housing.

All this in addition to a slew of projects completed over the past year or so, including the new Pabst Brewery, an office building, Eleven25.

"These transactions have been in the works for some time but are finally in the position to close," says McCarthy as we face the future Vim and Vigor. "What we're looking at across the street is from Milhaus Development. They've come into Milwaukee from Indianapolis in a pretty big way, growing their presence here.

"We’re real pleased to see the Malt House renovation is underway. We're all sold out here."

There are some nearby sites that one has to think may be in the news soon – MPS’ facilities and maintenance building and its parking lot, which is on the brewery site, and the coroner’s office, which is across the street from Eleven25 – but the last remaining brewery building owned by Zilber awaiting development is the old grain silo.

"We're still looking for the right entrepreneur that wants to take the 9,000 feet up there (at the top) and create a world class entertainment venue or maybe a world class condominium or two," McCarthy says.

"You know when you look at what we have – somewhere in the vicinity of 400 apartments, 150 hotel rooms, a brewery, a major office development still coming online – and the amount of people that that will add to this neighborhood, plus the visitors that will come to visit this historic area and the two breweries that will be operating here..."