The limited edition red velvet Oreo came out this week and we gave 'em a whirl.

Last fall, I first heard wind (and by that I mean I read it on Facebook) that Nabisco planned to introduce a limited-edition, red velvet Oreo on Monday, Feb. 1.

Even though I had been burned by the dreadful candy corn Oreo, I actually marked the red velvet release date on my calendar so I wouldn’t forget. I’ve been a fan of the unnaturally red dessert ever since the day I first tried a slice at the Fuel Cafe in the early ‘90s.

The weather was rough on Monday, but we went out for Oreos anyway. Perhaps it was blizzard-related, but neither the Metro Market, 1123 N. Van Buren St., nor Walgreens, 1433 W. Burnham St., had the cookies.

Disappointed but determined, we trudged back to the Metro Market on Tuesday night to finally score the elusive snack. We found them, but not without a search. The red velvets weren't stocked in the cookie aisle with the other Oreos, instead they were stacked on an end cap – and strangely, sans a sign.

My very first impression was disappointment – the package is about half the size of a regular package of Oreos – and yet the cost was 50 cents more. ($3.50 for 10.7 ounces.)

The package features an extremely delectable-looking slice of red velvet cake, but also the less-delectable words "cream cheese flavored creme." Then I glanced at the ingredients and, not surprisingly, saw sugar, high-fructose corn syrup and red dye 40 on the list. But Oreos are not oranges, and so, let's move on.

I busted open the bag and ate one of the fancy Oreos before my partner started the car. My first thought was that they were pretty good, less sweet than regular Oreos so they didn’t make my teeth weep after two bites. However, I also thought that they didn’t really taste much like the red velvet cake I’d eaten in the past.

And so, I took my plastic tray of vaguely velvety, creme-filled snacks straight to a professional – who, at the time, was drinking with friends at Sabbatic, 700 S. 2nd St.

Jenni Blank has made a red velvet cake on her birthday every year for 30 years. It began as a family tradition when she was a child, and she continued it as an adult. Hence, every March 31st, she celebrates by making a red velvet cake which she usually shares with her coworkers at Wheaton Franciscan Healthcare.

Although the red velvet version is less sugary tasting than the original Oreo, Jenni says it’s still too sweet.

As the office's official red velvet cake expert, Jenni said she would probably buy a package so her coworkers can try them.

"But they just don’t compare," she said. "I'm pretty disappointed."

However, Great Lakes Distillery's Guy Rehorst was also at the bar and, after trying one (or two), he had a more positive response. "Not bad," he said. "Do you have any milk?" 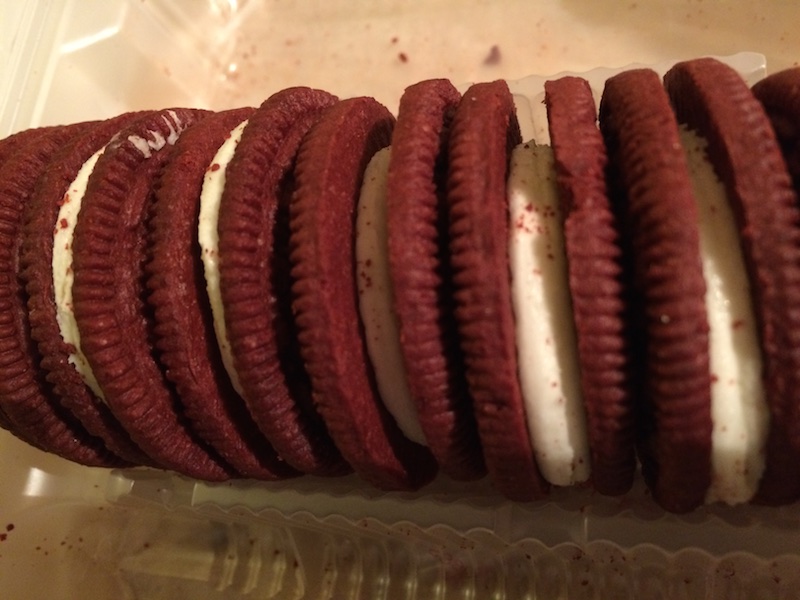 Bring your best baked goods to the Milwaukee Cookie Takedown

What is Milwaukee's favorite cookie? Marcus Restaurants aim to find out