Continuum plan would open former Reuss building out toward its plaza

In June, the former Reuss building's new owner tapped Continuum Architects to come up with a plan to revitalize the building. Now, a Continuum rendering shows new plantings, a coffee shop, a pub and grill - both with outdoor seating - other retail spaces all facing new plantings in a plaza alive with people.

"Through an investment of over $10 million in common building upgrades and amenities Time Equities intends to reposition this building into a first class office environment and contribute to the exciting transformation of Westown into a 24/7 work and entertainment district," Time Equities’ Director of Acquisitions Brad Gordon told BizTimes at the time.

"We feel the timing is perfect to accomplish this and intend to be a member of the Milwaukee business community indefinitely." 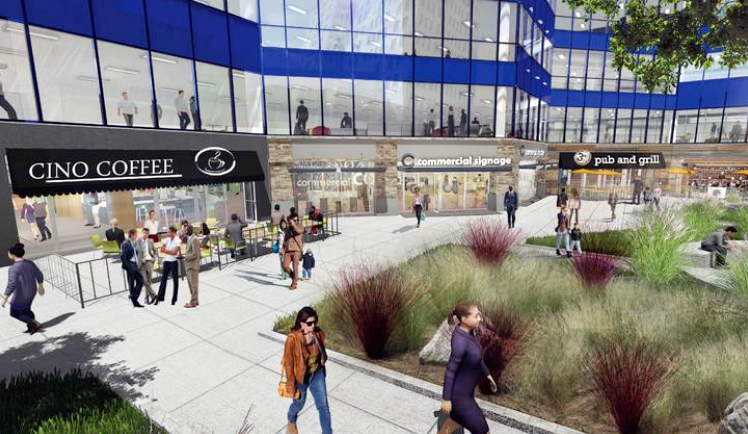 Then, in June, Time tapped Milwaukee’s Continuum Architects to come up with a plan to revitalize the building – completed in 1983 – whose retail spaces facing a triangular plaza at what was once Downtown’s most vibrant intersections, have long been moribund.

One Continuum rendering of the building, which would be rebranded as 310W, shows new plantings, a coffee shop, a pub and grill – both with outdoor seating – other retail spaces all facing new plantings in the plaza, which is alive with people.

At the moment, though there is some seating, a sculpture and plantings, the building itself doesn’t interact at all with the space. Some of the windows facing the plaza look into ESPN 540 Milwaukee’s radio broadcast studios, but the other windows are dark.

According to a report in the Milwaukee Business Journal this week, Gordon said the firm wants to open the building up to the street.

"I think it could be a really great amenity not only for the building but for that part of West Wisconsin Avenue," Gordon, who grew up in Milwaukee, told the paper. "Our goal is to activate that plaza area. The fact that we’ve got this first floor and the potential retail that will open up onto the plaza area, that’s something we want to take advantage of."

According to the report, Gordon said that while the radio station is likely to move its studios, the Capital Grille restaurant next door, facing Vel R. Phillips Avenue is expected to remain.