Before the north side of Bay View was cool: Santino's Little Italy

It's been two and a half years since Santino's Little Italy opened its doors on the northern edge of Bay View. At the time, it was an unlikely location for a successful restaurant. But recent and pending developments put this small Italian restaurant at the fore of exciting times for Bay View.

It’s been two and a half years since Santino’s Little Italy opened its doors at 352 E. Stewart St., on the northern edge of Bay View.

Some might say it was an unlikely spot to choose for a successful restaurant. The building – a one-time brothel – had seen better days. And, barring a few short blocks of homes, the surrounding land was all but a quasi-industrial wasteland strewn with railroad tracks, warehouses and light industrial firms. 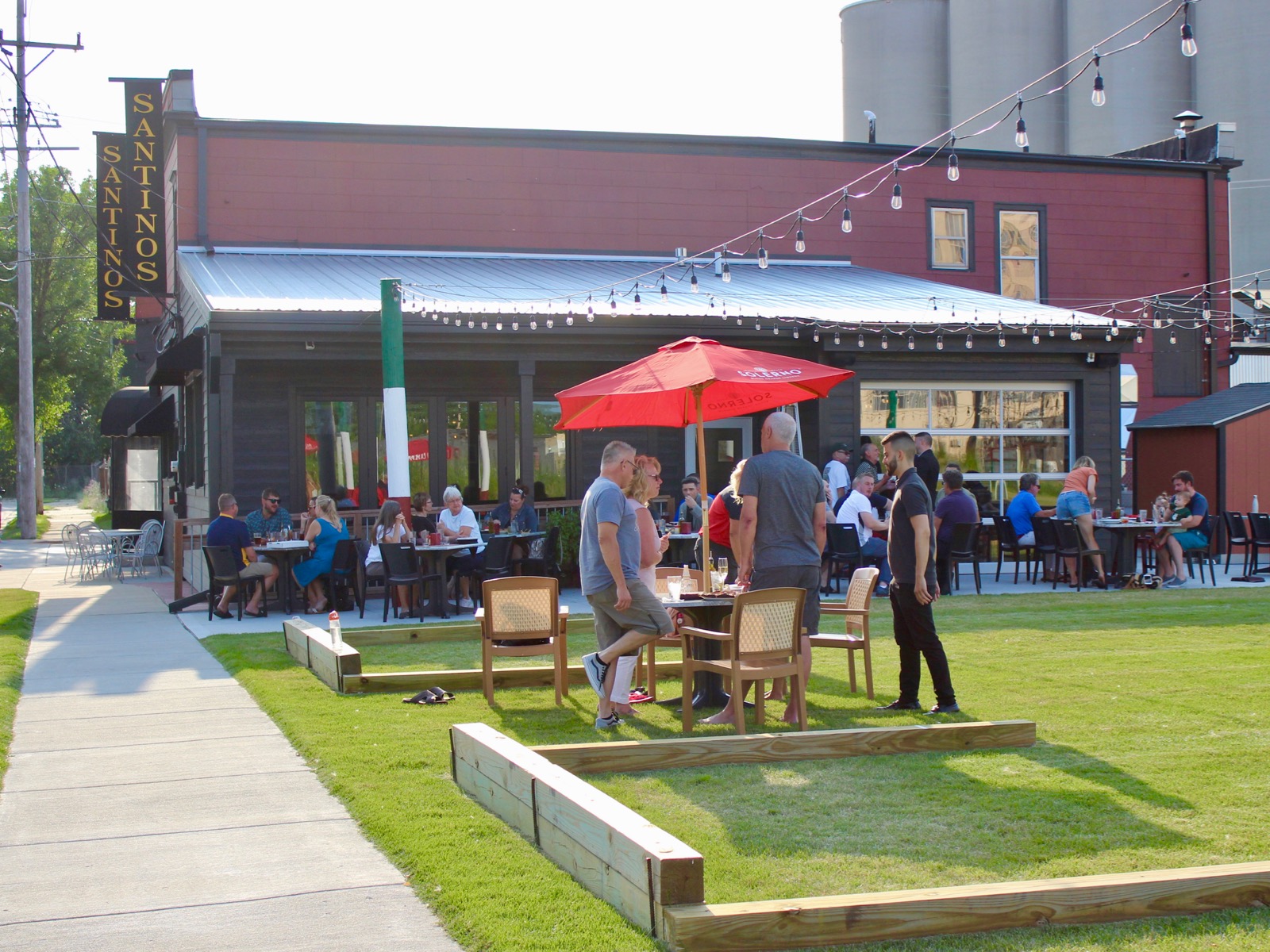 "When we bought the building and started construction, there was nothing here," says co-owner Greg Huber. "We’d be here working and there was nothing but cement trucks. And we never really asked ourselves: how are people going to find us?"

But, folks flocked to the restaurant, which offered up an old-school Italian restaurant vibe, along with antipasti, salads, pasta dishes and wood-fired pizzas from Chef Vasyl Lemberskyy. And, in the months and years to follow, the area surrounding Santino’s would see an unimaginable level of developments, with more to come.

The area surrounding Santino's has been on the upswing. Development of the Lincoln Warehouse to the West has provided retail space for numerous businesses including Twisted Path Distillery, Melt Chocolate Ltd. and more recently, Mor Bakery & Cafe. 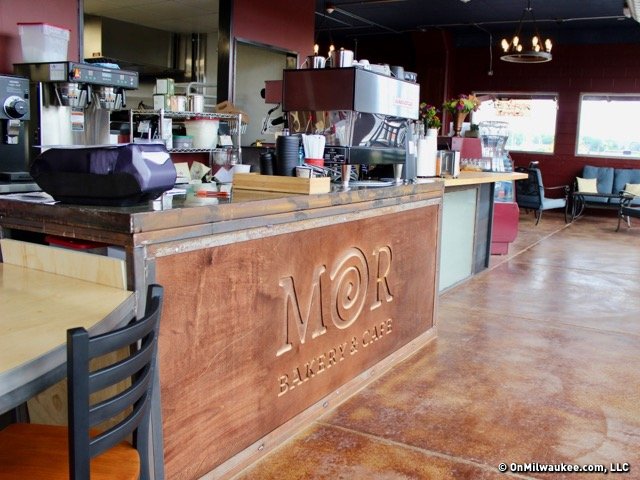 To the east, the former Louis Allis Motor plant has been enlivened by the addition of Enlightened Brewing Company, which traded its tiny nano-brewery in the Lincoln Warehouse for a 14,000-square foot brewery and tap room this May.

In 2018, Komatsu Mining. Corp. announced that they would build a new state-of-the-art headquarters and manufacturing campus just the North of Santino’s on Greenfield Ave. in Milwaukee’s Harbor District. 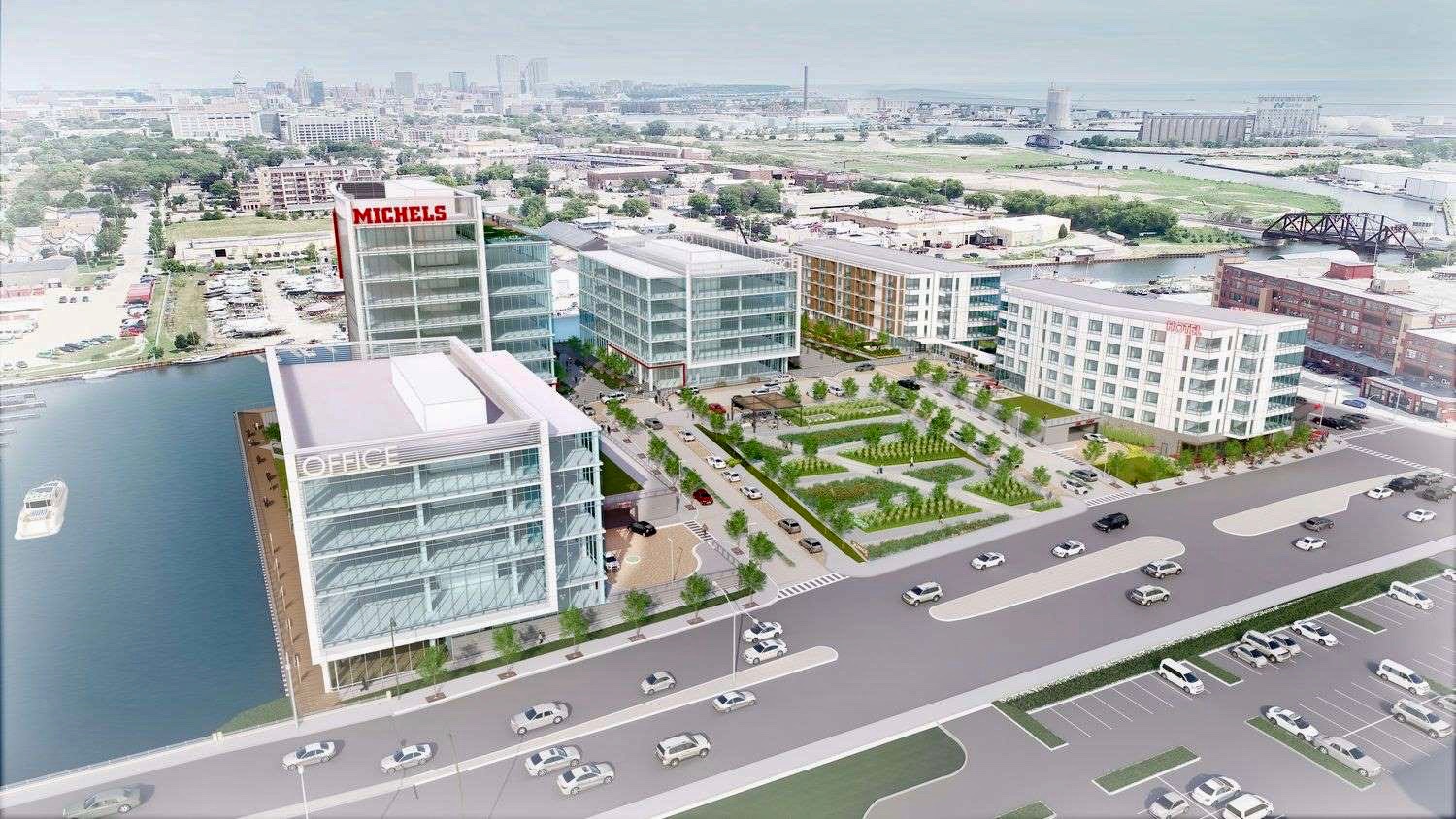 Most recently, New Land Enterprises announced yet another mixed use development directly to the south of Santino's. The project will include residential housing in the form of Kinetik Apartments, a pedestrian plaza, retail spaces and the Flour and Feed food hall. 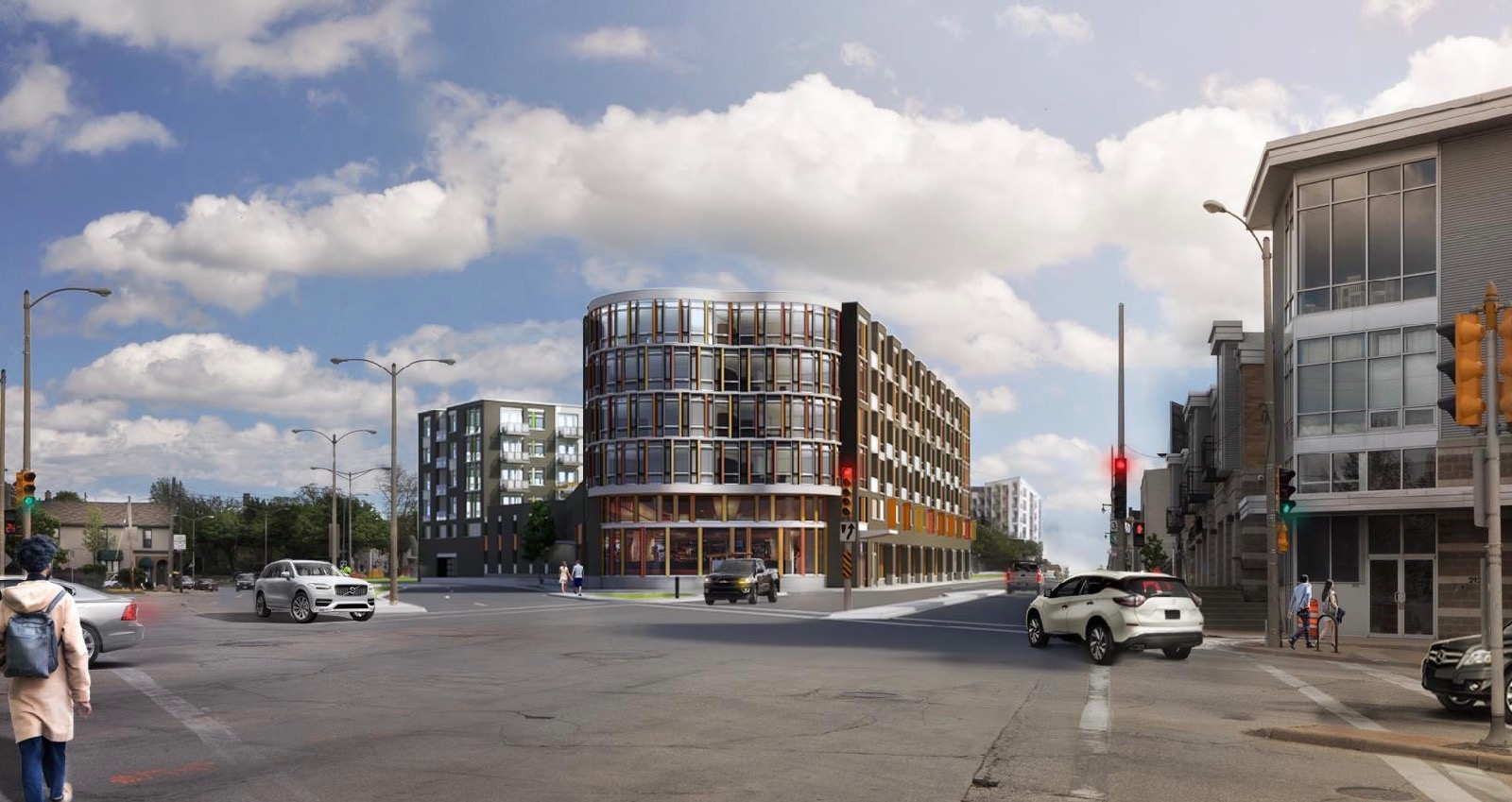 "I remember the call from Santo when he asked me, ‘Hey, do you want to buy an old run down bar in Bay View?"" says Huber, cracking a smile.

Huber’s partner Galati Santo nods. "When you think about all of the developments – and announced developments – in the area, it’s unbelievable. And you can feel the change in the air. We hear comments from people who’ve moved to Bay View from suburbs like Brookfield and New Berlin. Even people who live in the area frequently comment about how different it is here."

Growing with the neighborhood

"We really lucked out," says Huber. "When we bought this property, there was really nothing here, and the good part about that was that we could really only add to the neighborhood."

And add to it they did.

"It didn’t take more than six months before things began to change. Neighbors began painting their houses," says Galati, "And you could just feel a new level of energy surrounding us."

The restaurant’s business took off immediately, he adds, noting that growth was always part of the plan, but it happened much more quickly than they imagined.

Not even a year in, reviews started flowing in. Most were glowing. But one day, the partners read a review that gave them pause: "The food was great, but the restaurant was packed like a city bus," it read.

"Reading that filled us with so much anxiety," says Huber. "We’d gotten plenty of great reviews, but that one was like a shot direct to the kidney."

Fortunately, they’d built their initial restaurant patio with the proper footings that it could accommodate a build-out. So after just a year in business, they added a 1500 square foot addition to the restaurant, adding and additional bar and seating for an additional 45-50 guests. The new addition also allowed Santino’s to host private events and parties for eager patrons. 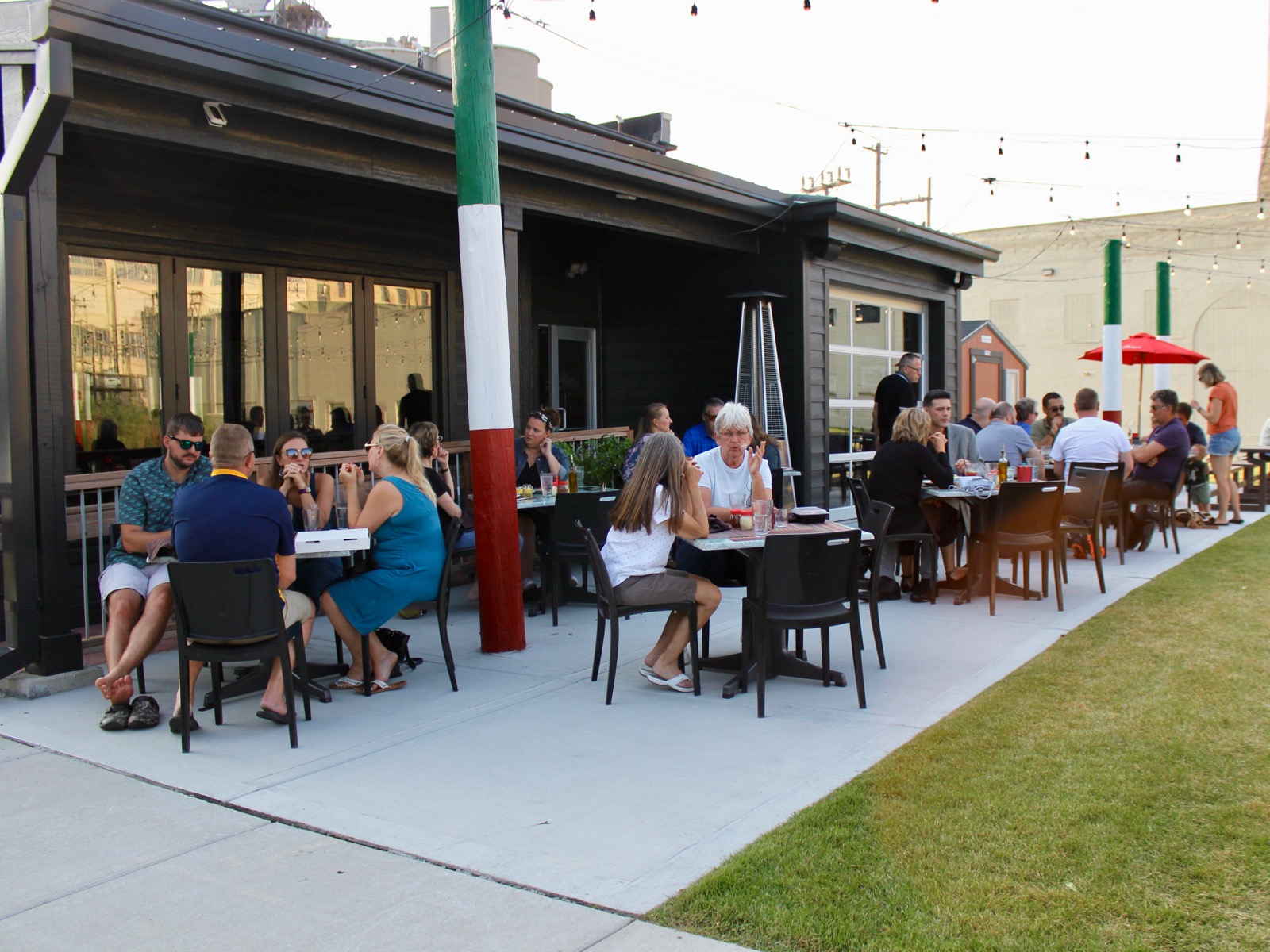 They knew they still needed outdoor seating to get them through the summer months, so they poured another cement patio to the East, adding new furniture and accommodations for another 45 or so people.

This summer, they took advantage of the green space adjacent to the patio, adding two bocce ball courts and enlisting folks from the Roma Lodge in Racine to organize bocce ball leagues on Sundays and Tuesdays. 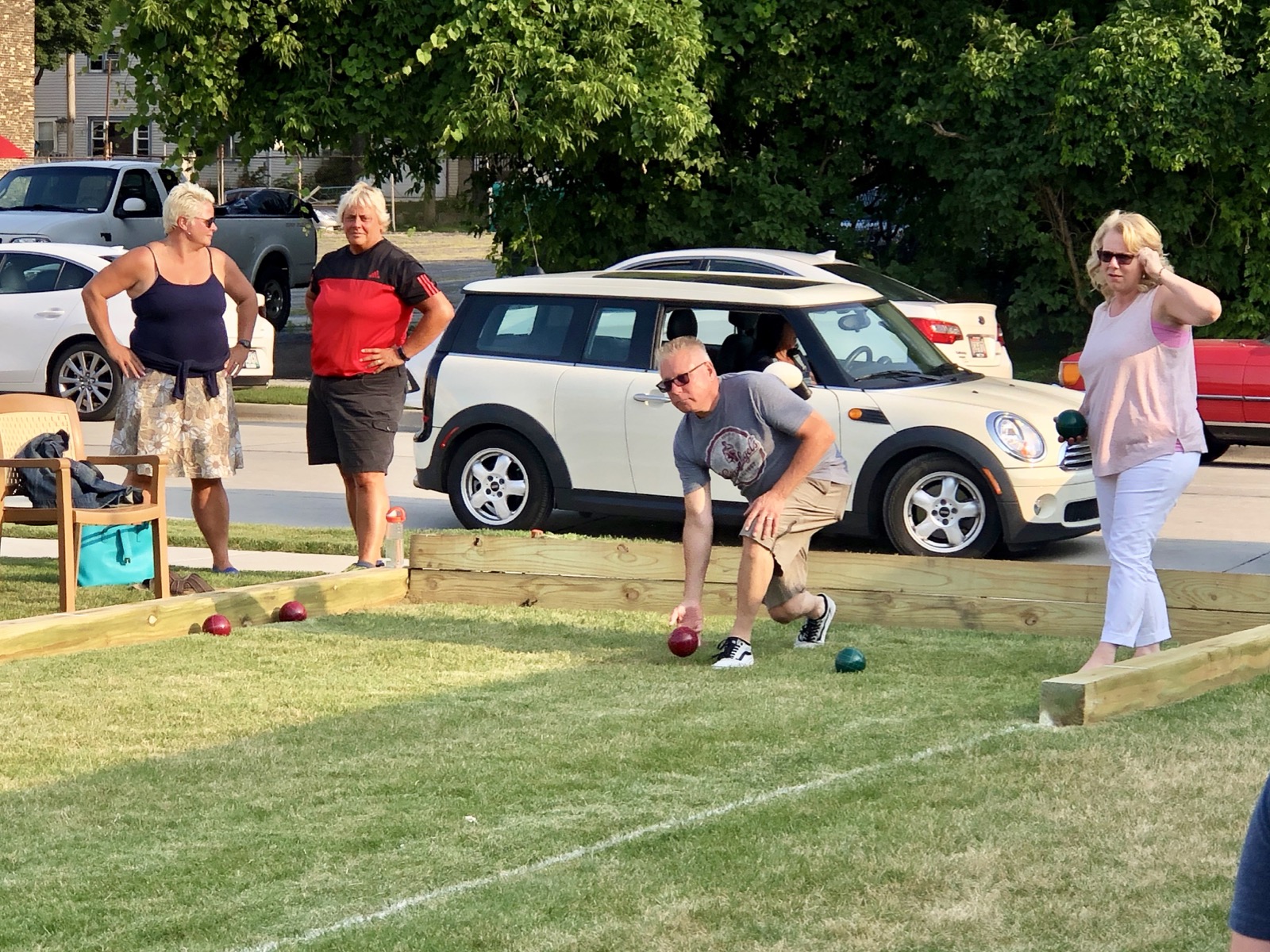 When leagues aren’t occupying the grounds, guests can reserve the courts for private games with family and friends.

"It’s fun. People drink and play bocce," says Huber. "You’ll see families playing and laughing ... and the old school Italian guys stand around swearing at one other, arguing about whose ball is closer to the pallina."

Something that hasn’t changed is the menu, which features a wide variety of antipasti, pastas and nearly 20 signature wood-fired pizzas, including the Paisano with San Marzano tomato sauce, pesto, spicy Italian sausage, shaved asiago and mozzarella cheese with cherry tomatoes ($16). 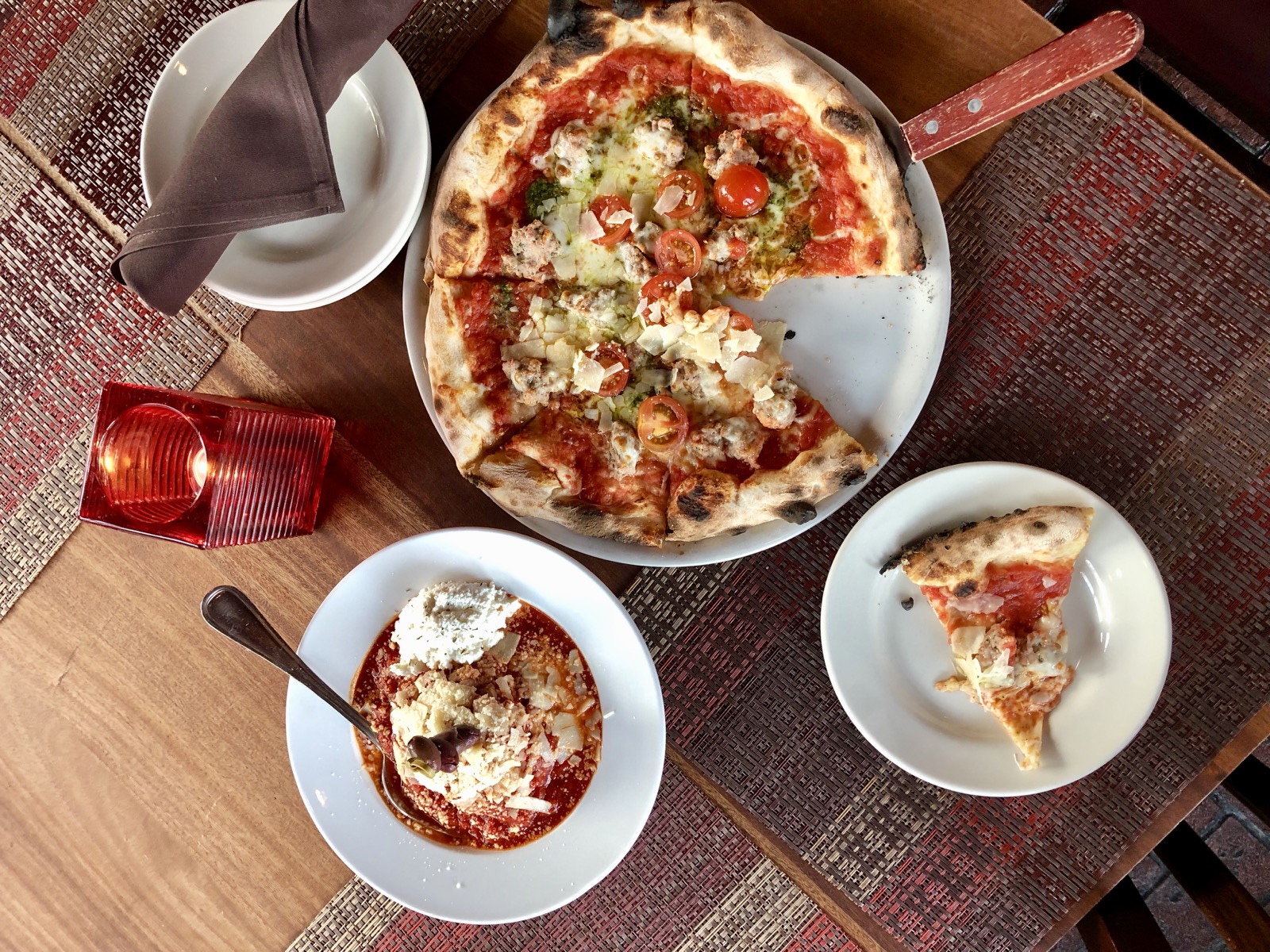 "We don’t skimp on quality just to save a quarter…" says Huber. "And people love it. Everyone has favorite items … like the meatballs, which are made with Santo’s mother’s recipe ... they’re just outstanding. People love them." 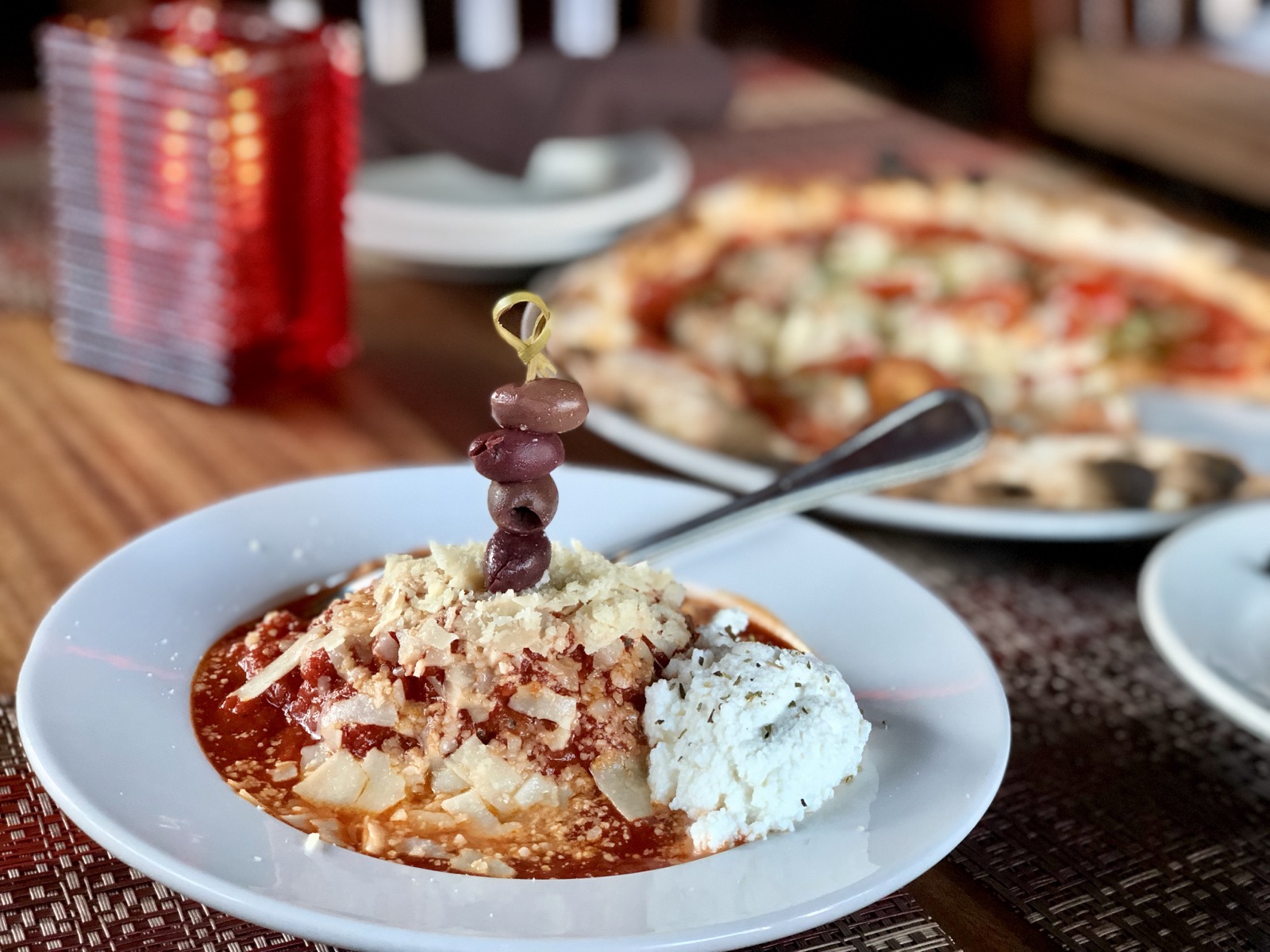 But it’s not just the food that people notice at Santino’s.

"It’s also the experience," says Galati. "People simply aren’t expecting what they find here, in terms of service and ambiance."

Another unexpected draw is Santino’s wine list, which includes a broad selection of Italian varietals, from Barolo and Brunello to Chianti and Valpolicella. 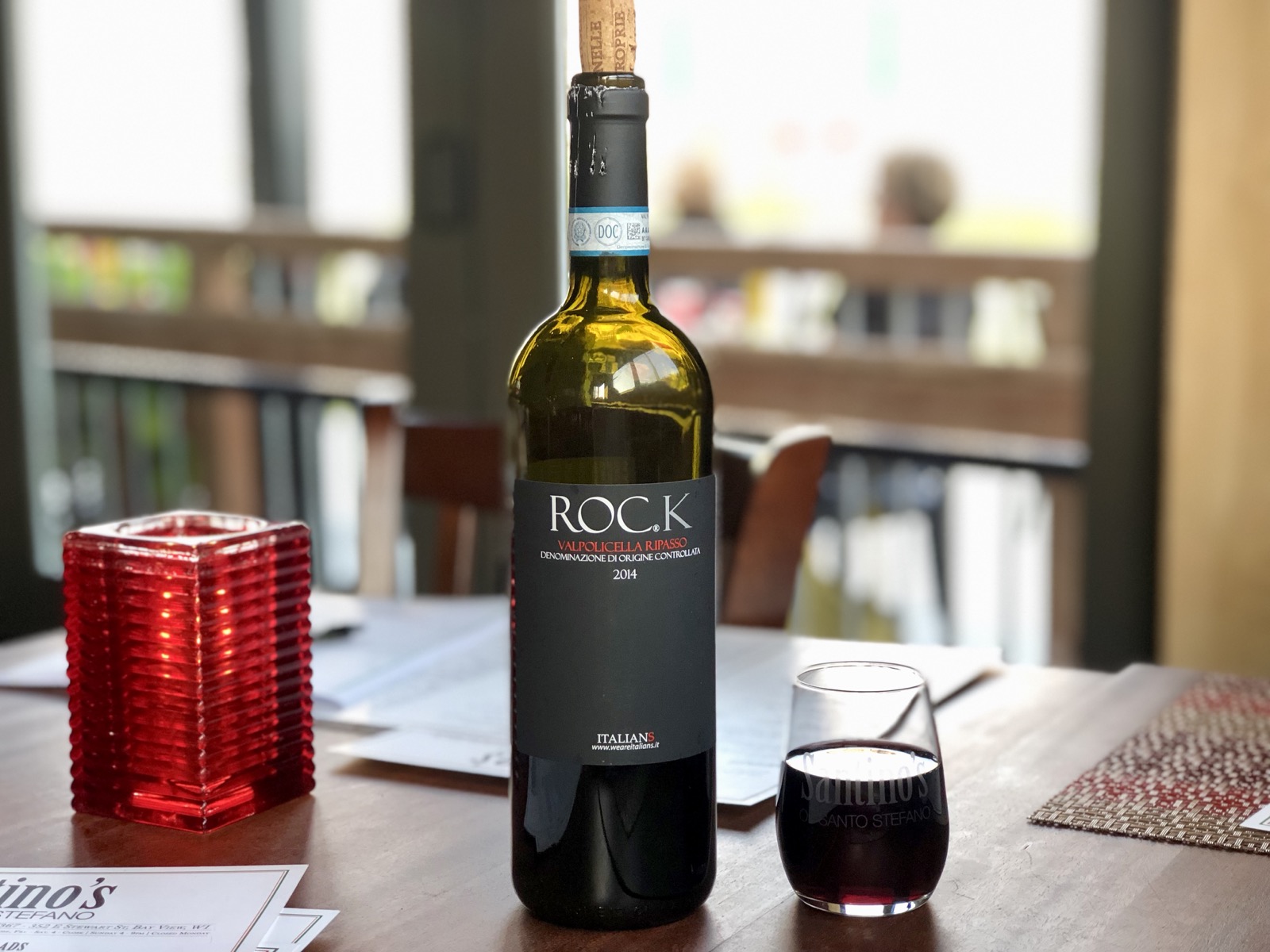 "We don’t advertise ourselves as a wine bar, but we could," says Huber. "People definitely take advantage of our selection, and we have a lot of fun introducing people to new things."

The bar has also gradually added a collection of amari for folks to enjoy as digestivi after their meals. The bitter liqueurs took a while to take off, but Galati says more and more people are asking for them, and they’re gradually expanding their collection to accommodate. 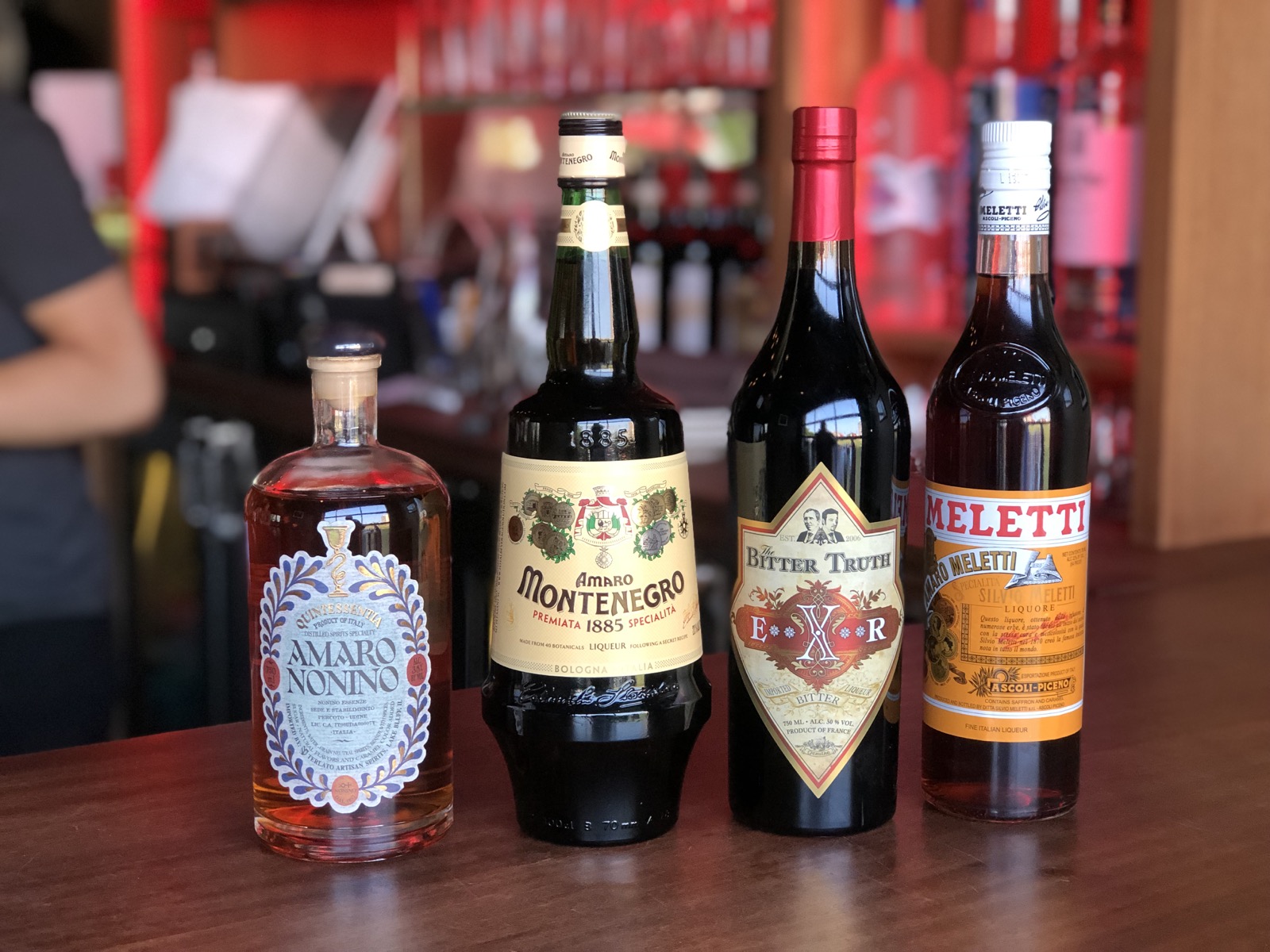 In fact, a glass of amaro makes the perfect accompaniment to a plate of Mama Galati’s Italian Cookies ($9), housemade daily by Galati's sisters Lucia Frittitta and Graziella Galati from their mother's recipes.

Both Huber and Galati express gratitude for both the patronage they’ve received from guests and the opportunities which have sprung up from the growth in the neighborhood.

"People come here and they feel the new life," says Santo. "Right around the time we bought this building, there was a feeling that the area was on the upswing ... there was momentum. But we couldn’t have imagined the scope of it all in our wildest dreams."

"We really like to think that all of it was driven by delicious wood-fired pizza, homemade meatballs and great Italian wine," Huber adds with a smile.