There are a number of fine vintage apartment buildings in Milwaukee, full of attractive ornament and classic design. One of them - the 1927 Sheridan Apartments, next to the Eagles Club, at 2435 W. Wisconsin Ave. - is being nominated for inclusion on the National Register of Historic Places.

There are a number of fine vintage apartment buildings in Milwaukee, especially along Prospect Avenue and Wisconsin Avenue, west of Marquette University, full of attractive ornament and classic design.

One of them – the 1927 Sheridan Apartments (pictured at right in a photo courtesy of the Wisconsin Historical Society), next to the Eagles Club, at 2435 W. Wisconsin Ave. – is being nominated for inclusion on the National Register of Historic Places. 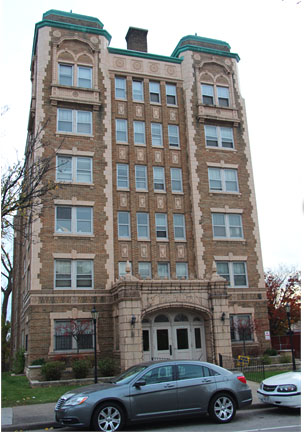 The building is owned by Rick Wiegand, who also owns the nearby Ambassador Hotel and former Tower Theater and Wisconsin Avenue School.

The application for that process has been written and Milwaukee’s Historic Preservation Commission will examine it at its next meeting, Monday, March 2, at 3 p.m. at City Hall.

This review occurs because Milwaukee is a Certified Local Government for the National Park Service, which maintains the National Register.

"One of the duties that CLGs have is to review incoming National Register nominations for their community," says Carlen Hatala of the Historic Preservation Commission (HPC). "The HPC can do one of two things, support the nomination or object to it.

"That decision is put into a letter and sent to the State Historic Preservation Office and the letter becomes part of the record. It is either read or just referenced when the State Review Board for National Register nominations reviews the nomination at one of its quarterly meetings."

According to Hatala, opposition by a CLG is rare.

"I sit on the State Review Board and over all the years have yet to see a CLG object to a nomination," she says. 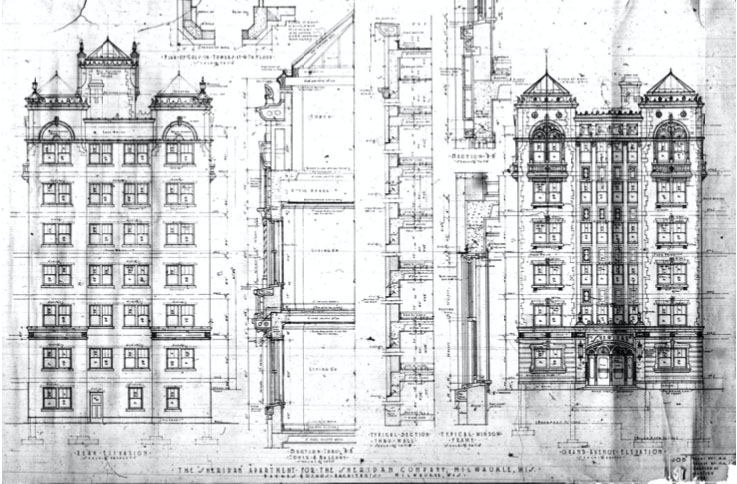 The six-story, 55-unit Mediterranean-style Sheridan Apartments building was designed by Backes & Uthes and it is quite stunning to behold, laced as it is with copious terra cotta ornament, especially its projecting entrance, fabricated by American Terra Cotta and Ceramic Company in Crystal Lake, Illinois.

"The exterior is faced with a multicolored pattern of orange bricks and terra cotta with similar, but distinctly lighter tones," wrote Ben Tyjeski in his book, "Architectural Terra Cotta of Milwaukee County."

"The matte, pulsichrome glazes have light buff and orange hues with some exposed clay. The majestic entrance is decorated with anthemion, two conical filials and rosettes. The name of the building is also carved in terra cotta units there. Floral medallions and escutcheons embellish the facade. The windows on the upper story of the towers also display intricate arches and balconets."

The two hip roof towers at the top front corners are clad in copper and there are terra cotta quoins on the corners of the building’s facade.

According to the nomination form, "the building is strongly evocative of the height of apartment living in the early twentieth century in Milwaukee, due in large part to this combination of intact interior and exterior elements. It serves as an excellent example of the way Period Revival architectural styles are applied to established building types as well as a fine example of Mediterranean Revival architecture in Milwaukee. 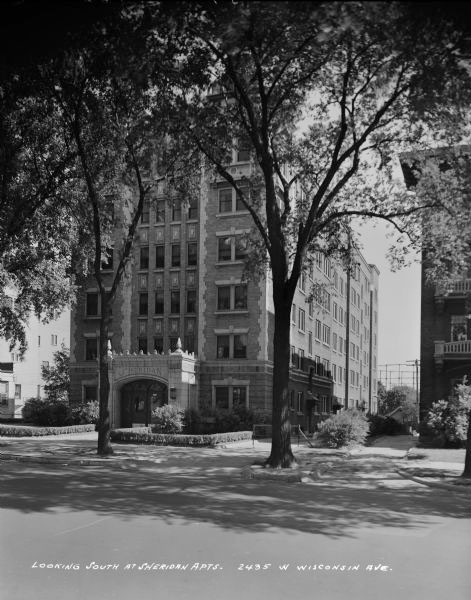 An undated view of the Sheridan. (PHOTO: Wisconsin Historical Society)

"The Sheridan Apartment Building is a highly intact example of a 1920s elevator apartment building in Milwaukee, constructed at the peak of this building type. The Backes & Uthes design incorporated many of the in-demand features for apartments of the era, including parcel boxes, refrigeration, radiant heat, built-in storage, large basement storage rooms, on-site laundry, electricity, and an elevator. The building retains all of these significant features, interior and exterior, with very few and isolated exceptions."

The building is also a testament to the changes that had come to the former mansion-lined Grand Avenue.

"By the 1920s, the luster and exclusivity of Grand Avenue began to wear off," notes the nomination. "Wealthy families chose to move to the lakeshore, the north shore suburbs, and Wauwatosa. Between 1910 and 1940, many of the mansions were converted to rooming houses or institutional uses, or increasingly demolished and replaced with apartment blocks and commercial structures.

"The street was renamed Wisconsin Avenue in 1926, reflecting the loss of its ‘grand’ standing. The westward expansion of the central business district and Marquette University also worked to transform Grand Avenue in the 1910s and 1920s. Commercial development occurred as large mansion parcels were subdivided. Many single-family mansions were replaced by office buildings and hotels. Others received storefront additions, making the mansion nearly imperceptible from the street."