Worthy resolution: Support restaurants as they go greener in 2019

We have a good number of restaurants in our city that are making increasingly eco-friendly decisions. In turn, as consumers, we have an equally important task: supporting restaurants that are doing the right thing. And even that small effort makes a huge difference.

Last year, numerous restaurants – including Bowls, Lulu Café, Dandan, Engine Company No. 3, Honeypie Cafe, Hi-Hat Lounge, La Merenda and SmallPie – eschewed the use of plastic straws, either giving them up entirely or replacing them with compostable options.

But giving up plastic straws is just the tip of the iceberg when it comes to making a commitment to reducing waste.

More to be done

How about all those Styrofoam take-out containers? The plastic coated coffee cups? How about the plastic flatware that can take up to a century to fully decompose in a landfill? Even the cleaning chemicals poured down countless restaurant drains contribute to toxicity for wildlife and pollution in our waterways.

Despite strides in the right direction, there’s still plenty to be done to make eating and drinking a more sustainable enterprise. Fortunately, we have a good number of restaurants in our city that are making increasingly eco-friendly decisions. In turn, as consumers, we have an equally important task: supporting restaurants that are doing the right thing.

Take the new Crossroads Collective food hall, for example, which has made a commitment to using reusable trays and compostable flatware, cups, straws, napkins and parchment paper.  Like countless other restaurants, they’ve also partnered with Compost Crusader to ensure that items are diverted from area landfills and returned to the earth in a safe, sustainable manner. 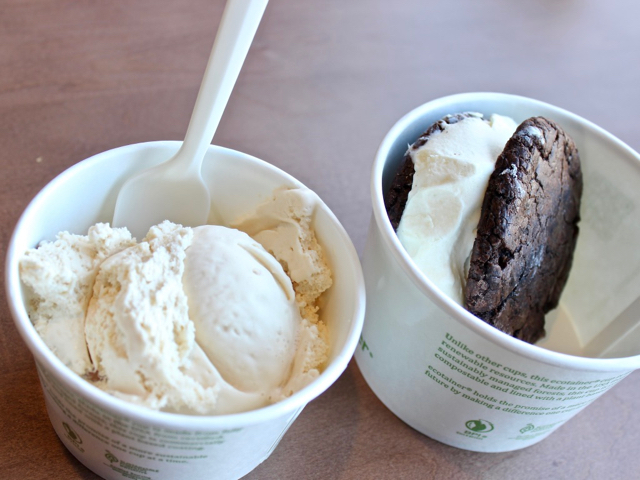 Beerline Cafe, a vegetarian restaurant which has earned a four-star Green Restaurant Association rating, has also made a commitment to reducing its impact on the environment. Unlike many fast casual restaurants, Beerline makes use of reusable tableware and flatware for dine-in customers, while providing compostable take-out containers, hot and cold drink cups, straws, napkins, bags and utensils for diners who choose to take their food on the go.

"The added cost for the compostable to-go containers themselves as well as the increased cost for using and washing the reusable dine-in items instead of using cheap disposables is well worth it to me," notes owner Michael Allen. "It allows me to sleep well at night knowing that waste materials from my restaurants are not sitting in landfills for hundreds of years or floating in the oceans." 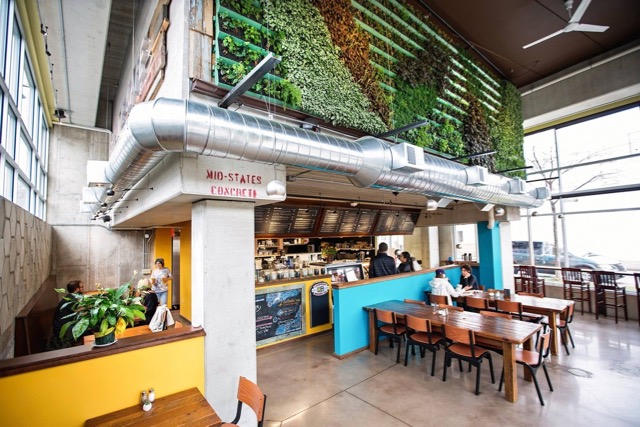 Companies like Auburn Supply Group, 170 S. 2nd St., are working to bolster the efforts of places like Beerline Cafe.

This Milwaukee-based supplier of eco-friendly restaurant supplies, custom and branded products and green cleaning products, has made it their mission to be at the forefront of sustainable food service products, making it easier for restaurants to stay true to their values.

Before founding Auburn Supply Group, founder Kris Piatek spent years working as a commercial property manager, a role in which he grew increasingly frustrated with the lack of sustainable options in the marketplace.

"I didn’t see anyone talking about the sourcing of products, the process used to make them or whether they could be recycled or composted," he says. "Even at that time, I would have loved to have purchased products that were recyclable or made with unbleached paper. So I decided to do it better. Ten years ago, it was a very different picture than it is today. And one of the things that differentiated us was our commitment to environmentally friendly products."

The company, which began as a one-man operation, has made significant strides over the last decade, adding seven full time employees, including delivery, sales and administrative staff and dedicating time and energy to establishing a business model that supports businesses in implementing more eco-friendly operations. Most recently, they've expanded their reach to include businesses in the Florida market.

"If someone wants to move away from Styrofoam or plastic, it can seem difficult because the first point of contact they have is the supplier of the foam products," says Piatek, "But we like to think that we make it easy for people to make that switch. We have multiple products from which to choose, and we’re committed to finding the right products for each restaurant."

To prove just how easy the transition can be, Auburn Supply has made the effort to sponsor local events like the annual Bay View Bash, providing cups, containers and flatware for participating food and beverage vendors, all of which were collected and composted by  Kompost Kids.

"It’s proof that you can be close to zero waste, even at large events," says Piatek.

"It’s about things as simple as asking if a customer would like disposable flatware or napkins, instead of automatically adding them to a carryout order," he says. "It’s things as small as the decision about what kind of soap to use. The containers most soap comes in is plastic, and it’s usually not recyclable. So why not switch to refillable containers?"

In fact, Piatek says that moving away from the use of plastics is a huge piece of the environmental puzzle. But it’s not always as easy as it might seem. In fact, he says that one of the biggest hurdles they’ve seen in terms of businesses making a switch to more sustainable products is education.

"There are so many products out there that aren’t necessarily what they seem to be," he says. "People assume that products that labeled biodegradable are compostable; but most are not. These items become brittle when exposed to sunlight, but they don’t break down completely. As a result, we spend a good deal of time really researching the products we carry."

"We’ve moved into an era where it’s relatively easy to find plastic-like products that are made from corn," he says. "They’re commercially compostable, so they reduce the amount of waste that’s going into the landfills. We’re also seeing an increasing number of products made from sugarcane byproducts, which used to be burned after production. Some are fortified with natural fibers like bamboo or wheatgrass, which make them stronger and more resilient."

The sun is out and this cold beverage served in an #auburnsupplygroup custom, compostable cup for @lakefrontbrewery is making my mouth water! 🌞 #shopsmall #shoplocal #sustainable Auburn Supply Group EAT DRINK CLEAN ECO

But helping restaurants make the switch is about more than simply selling them a more sustainable product.

"Straws are a huge deal at the moment -- not only here, but across the entire country, " he says. "And part of our job is to ensure that the products are actually functional. Before we make a commitment to a vendor, we put the product through vigorous testing to ensure that it’s something that does what it says it does. In the case of straws, we look at how the straws function during usage. A straw that folds or disintegrates during use isn’t acceptable."

Piatek says that, despite advances in the number of products available to restaurants, there are some areas that remain challenging.

"One that’s been somewhat difficult to navigate is bakery products," he says. "Due to the high temperatures, compostable products tend to break down. So, it’s an area that we’re looking closely at, and we’re keeping our eyes open for innovation." 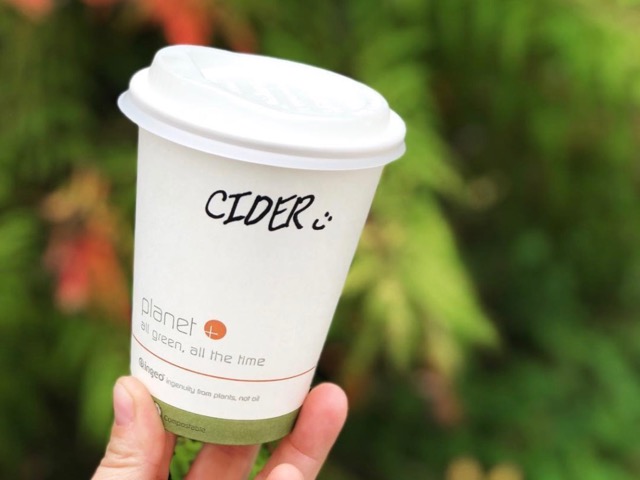 Custom solutions for coffee and tea

In some cases, Piatek says, they’ve turned to developing their own solutions.

"There’s a lot to pay attention to," he says. "And it’s our job to stay at the forefront of development. So, we spend a lot of time discussing disposable products and their origins. But we also understand that the chemicals that we’re putting down the drain are just as important. Every restaurant needs to be cleaned, floors mopped and dishes cleaned."

As a result, Piatek says Auburn Supply has spent the past year or more working with a chemist to develop a line of environmentally safe cleaning products for the tea and coffee industry.

"These are things that can be used to clean espresso machines, cold brewers and tea brewing equipment," he says. "They are phosphate free and environmentally friendly; they also don’t leave behind harmful residues or odors that could be harmful."

Piatek says he hopes the products will be widely available in early 2019.

"Corazon is committed to the environment and reducing our footprint in any way we can, regardless of cost," she says. "But Auburn has worked hard to match pricing and in some cases have been able to offer a better deal than other sources, so there has not been a significant added cost."

It’s a commitment shared by Chef Dave Swanson and the staff at Braise Restaurant in Bay View where they regularly purchase items like to-go containers, serveware for events like their annual Garlic Fest, garbage bags and phosphate-free dishwashing and cleaning products from Auburn Supply and companies like Patra, which manufactures dinnerware from fallen Areca palm leaves. 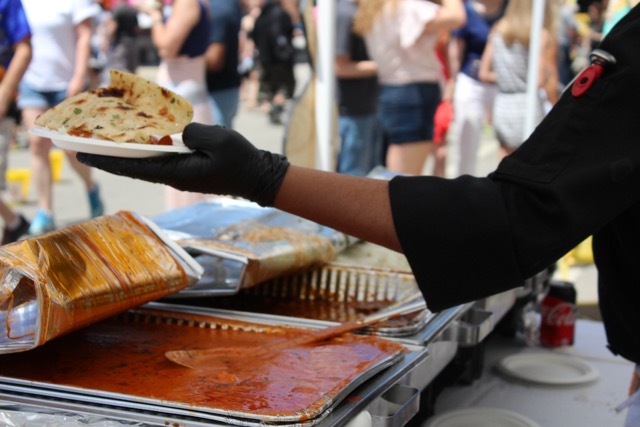 "When you work with local food," Swanson says. "You have to be all in. It's not only about how food is grown, but what our impact is on the environment procuring that food and taking care of the food waste and ancillary processes including washing, cleaning and overall water consumption."

Swanson acknowledges that the commitment breeds added operational costs, but he says Braise offsets these costs with a revenue model that includes the Braise RSA, educational programs about local food in area schools and events showcasing local foods.

And for those who doubt the impact consumer choices make when it comes to restaurant sustainability practices, Piatek says it not only makes a difference, but it can be a game changer in terms of impacting the direction of the market.

"The customers who visit restaurants, breweries and coffee shops make a big difference," says Piatek. "If they start saying "no" to products that hurt the environment, it makes a huge difference. Even choosing to support places that are doing it right is a huge part of change."

Dwayne 'The Rock' Johnson's Mana Mobile to visit the Cream City on Sept. 30

Lori Fredrich Sep 28 Dining
Do This

Lori Fredrich Sep 21 Dining
Do This

Get your tickets: 6th Annual Battle of the Chefs to take place Sept. 25