It's Friday, so what better way to welcome the weekend then with a frankly irresponsible amount of french fries - including the brand new nacho fries from Taco Bell. Can they compare to their fellow fast food favorites?

It's Friday, so what better way to welcome the weekend then with a frankly irresponsible amount of french fries?

This week, Taco Bell – veering from its usual formula of mixing meat, cheese, lettuce, tomato and some kind of tortilla or three into something vaguely resembling Mexican food – made an aggressive move at its fellow fast food competitors by introducing nacho fries, the company's version of a french fry. And as no stranger to sampling odd drive-thru foods and assailing my arteries with an amount of grease my doctor describes as, "oh, dear god," I decided I needed to try these new fast food frites – which are currently on sale for only $1 with a side of dipping sauce, in addition to a nacho format with various toppings, through March.

But the question isn't just: Are Taco Bell's nacho fries good? They're french fries; how bad could they be? The real question is: How do they fare against the rest of the fast food french fry flock? So I recruited sports editor Jimmy Carlton to join me on a Facebook Live to taste test these tubers alongside four other crispy competitors: Wendy's, Arby's, Chic-Fil-A and, of course, McDonald's. Here are the results from our very scientific research.

When you eat something at Taco Bell, you expect a certain garishness, a triple-stuffed beefy supreme gaudiness. You expect a taco shell blasted with Dorito dust or a burrito with Cheetos inside or a chalupa shell made of chicken. I do not expect tame from Taco Bell – and yet that's what you get with these alarmingly flavor-deficient nacho fries.

Their special Taco Bell-ness comes from the supposed "Mexican seasoning," but trying the fries, it is barely there, tasting less like bold Mexican seasonings and more like they happened to be lying next to some Doritos Locos Tacos and some of their dust accidentally wafted over. Combined with the standard-issue mild orange goo nacho cheese dipping sauce, there's nothing special or noteworthy about these snacks. Taco Bell took this long to enter the french fry fight and could only summon ... this? 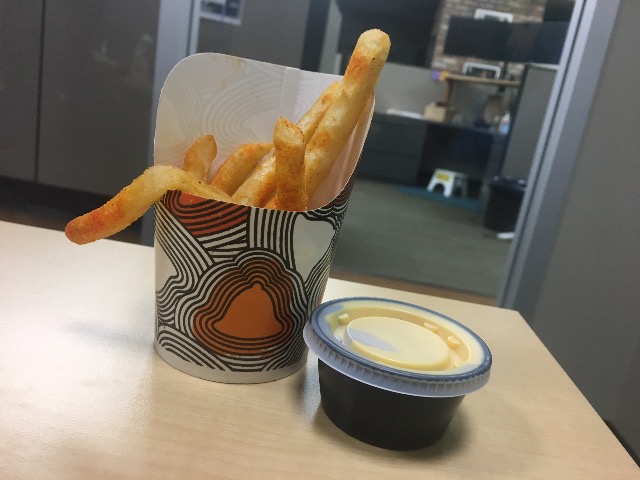 True story: Not a single fry was eaten or moved from this container before the photo. This is just how sad they looked.

Call me when you stuff these inside a burrito inside a taco inside a Dorito-coated Quesarito.

In fairness to Wendy's, the distance between these fries and third place is much closer than here and Taco Bell's tasteless effort. They're a little thicker than your standard McDonald's, well-salted and they come "all-natural" with the potato skin still left on the ends, so you can almost convince yourself these are healthier than most. (HAHAHAHA!) But there's just little special about these taters, and munching on the leftovers after the Facebook Live, it took a while for the Wendy's fries to disappear. Still a strong fry, just tough competition (and also Taco Bell).

Now this, Taco Bell, is how you flavor a fry. Obviously the fun curly shape makes Arby's automatically stand out from the crowd, but the real star of the show here is the taste – from the extra-crispy texture to the special seasoning, which copycat recipes online tell me comes from paprika, salt, both onion and garlic powder and cayenne pepper. These tight little delectable curls are perfect for snacking – though points are probably docked when you run out of the really good twirls and you're left with just the really crunchy, more-crust-than-potato bits, which I always seem to have too many of at the bottom of the carton. Maybe its karmic retribution for my venison sandwich review. DAMN YOU ARBY'S!

Really, the only reason why McDonald's isn't No. 1 is because McDonald's landing in the top spot for french fries is boring. It's the Warriors winning the NBA Finals – and like Golden State, no one complains too much because they're just so dang enjoyable.

Everyone knows McDonald's fries are the pinnacle of the art form, perfectly seasoned and perfectly crispy. They somehow taste like how your memory says french fries are supposed to taste. They taste like home ... which is a really, really sad and pathetic thing to say about a soulless monolithic corporate entity's fried food. But damn, those fries are tasty (though I could make a strong argument that the best potato-based McDonald's menu item is actually the hash brown).

What is it about Chic-fil-A fries that make me so happy? Is it just the shape of waffle fry? Is there some kind of science that leads to the perfect crispy yet fluffy texture? Or maybe's there some sort of psychological thing that says that, since these fries are bigger, it tricks my brain into thinking I'm getting more deliciousness for my money? Maybe waffle fries are just more fun! I don't know; I don't like to think too hard about my fast food, because then I might start eating salads instead. All I know is that, alongside their delicious chicken, these are perfectly crave-able bites, perfectly salted and perfectly potato-y ... if you're able to put aside the company's unpalatable politics.