As Mike Eitel - of The Nomad, Panga, Sport Club and other venues - prepares the Turner Hall restaurant space for its new life as Tavern at Turner Hall, expected to open in early October, he walked me through the space today to give OnMilwaukee a peek at how it will look. Spoiler alert: The historic murals will remain in place.

As Mike Eitel – of Nomad World Pub, Panga, SportClub and other venues – prepares the Turner Hall restaurant space for its new life as Tavern at Turner Hall, he walked me through the space today to give OnMilwaukee a peek at how it will look.

Eitel expects to open the bar and restaurant by early October.

Fans of historic preservation will be pleased to know that, except in a couple cases, the historic murals that have adorned the walls of the north dining room (aka the Club House) will remain in place.

Turner Hall, designed by important Milwaukee architect Henry C. Koch, was built in 1882. It was one of a number of buildings erected by German turner groups in Milwaukee.

The paintings likely began arriving around that time and kept coming until about World War I, according to Aims McGuinness, an associate professor of history at UW-Milwaukee and a member of the Milwaukee Turners, who prepared a report on the murals for the Turners board in August. 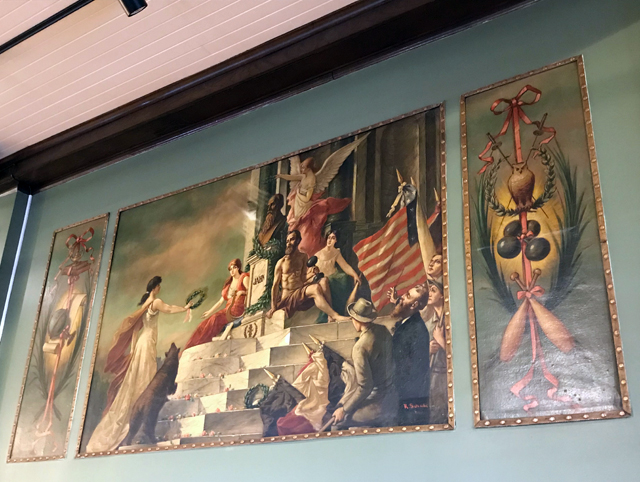 One of the paintings – which depicts a fisherman in a boat and was painted on canvas affixed to the wall – was professionally removed by the Milwaukee Turners and is being stored.

"We’re still figuring out where to put it in the building," says Katharina Hren, executive director of Turner Hall.

Another narrow, vertical painting depicting flora will be covered, but protected so that it can reappear, undamaged, in the future.

The paintings are considered important examples of German-American art in Milwaukee and beyond.

"The collection in Turner Hall has a richness and diversity of works that is unrivaled in the United States, in terms not only of the number of works but the number of painters represented, the topics addressed and the periods represented," wrote McGuinness in the report. 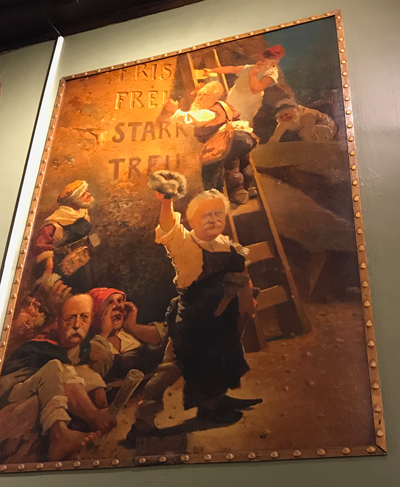 "The paintings are among the very last remaining vestiges of German-language public art in a city where the German language and much else of German-American culture was eradicated or suppressed after U.S. entry into World War I. The only other example I can think of this is the mural in Usinger’s by Georg Peter."

The paintings were made by a number of Milwaukee-based artists who were key players in the city’s panorama painting scene.

Artists depicted famous battles and other scenes on massive canvases – some as tall as 15 meters – that were displayed in a circle inside circus-style tents, enveloping the viewers who walked around, transporting themselves to the scene.

"Milwaukee was an international center of panorama painting in the late 1800s," McGuinness wrote. "The panorama was one of the great popular entertainments in Europe and the Americas in the late 19th and early 20th century and the ancestor of the modern film and television industries.

"All of the great panoramas that were created in Milwaukee were destroyed or deteriorated long ago, with one exception: Atlanta’s ‘Cyclorama,' or 'The Battle of Atlanta.' The Cyclorama has been relocated and restored, and will be available for public viewing once again in February 2019," wrote McGuinness.

"The paintings exist at a scale that is the closest we can get today to the experience of visiting a panorama, and they are exemplars of panorama painters’ strategies for creating a sense of drama and awe in viewers."

Among the painters who have work on the walls at Turner Hall are George Peter, Franz Biberstein, Robert Schade, Carl Sende and Friedrich Wilhelm Heine.

Among the scenes depicted are the foundation of the Turners, German victory over France in the Franco-Prussian War, a Civil War battle, a eulogy to Turner founder Ludwig Jahn, the arrival of the Turners in the United States and a scene in which Solomon Juneau stands with a Native American on the shores of Lake Michigan upon the former’s arrival here (a detail of that painting is below). 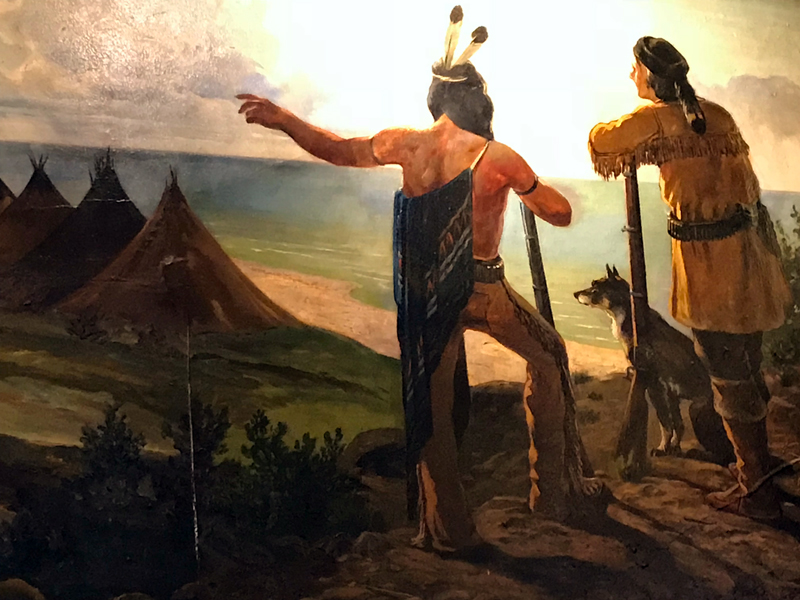 "The paintings are still in their original location," noted McGuinness. "They have not been moved, as far as I know, since they were hung, probably over a period of time ranging from the 1800s to shortly before World War I. Visitors to Turner Hall can view the paintings, in other words, as they were originally intended to be experienced."

That will remain true moving forward, according to Eitel, who plans to tap local artist Amy O’Neill to paint at least two new murals that will echo – and appear alongside – a pair of historic murals in the space. The new murals would mimic their older counterparts but with depictions of faces of more contemporary Milwaukeeans.

Much of the space has been altered over the years; some of it will change, says Eitel, while other elements will remain more or less the same. And, he says, it won’t happen all at once.

"It was turn-key," he says of the restaurant, as we stand in the large, barrel-vaulted room that was, and will remain, the palm garden. "We’re going to let this place slowly evolve, like The Nomad.

"It doesn’t really need us to do anything. I’m not in a big hurry." 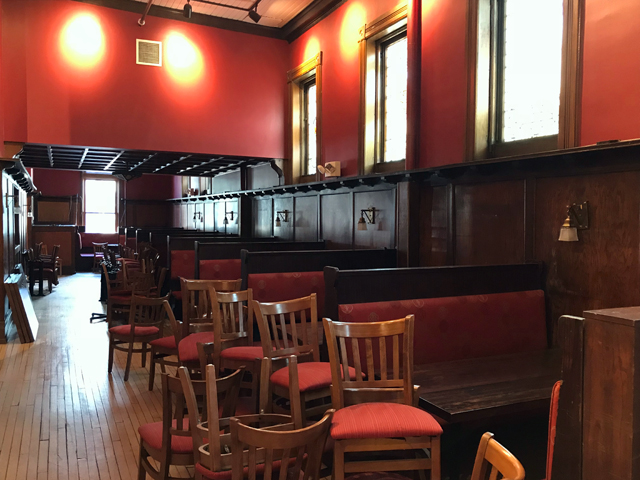 Having said that, the northernmost space – which Eitel is calling "The Parlor" – will keep some of its banquettes, while others will be replaced with tables.

"This area (nearest 4th Street) where it got kind of closed in, is going be dark and with booth seating. There's going to be a huge sofa section."

The space to the south of that will also have high-top tables, as will the adjacent space with windows overlooking 4th Street. That more intimate room, which he calls "The Library," will also get a pool table and TVs.

Eitel has removed those oppressive memorabilia display cases that hung over the bar, making customers reflexively duck their heads, and he will remove and repurpose the wrought iron gate that separates the bar space from the main staircase. The reopened area will again serve as an entrance/exit.

Hren says that the Turners are also planning to "spruce up" the hallway and stairwell soon.

Most of the interior has been painted and in some hues familiar to regulars of Eitel’s other places.

"This is the original Nomad green," he says in the dining room. Pointing across the room, Eitel adds, "and that’s the original Hi-Hat red over there."

In the palm garden, Eitel is painting the ceilings gold and creating a lounge-like vibe that he envisions as functioning like the lobby in a hip, modern hotel.

In this room, the light fixtures will change, and the old train station clock has sadly disappeared (Eitel really had hoped to keep that) and so have the potted palms. Eitel plans to bring the latter back to the space, which he envisions as an area for events, including parties, weddings, meet and greets with bands performing upstairs, etc. 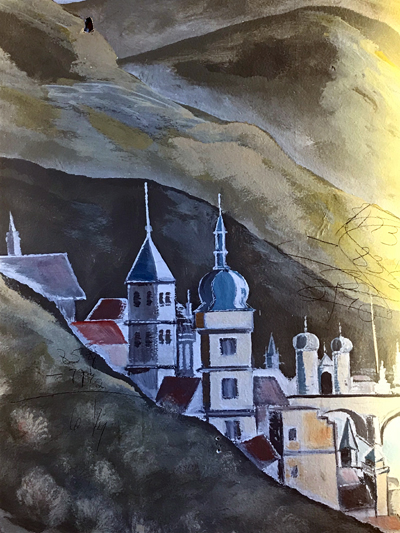 A series of murals depicting German scenes (an example is pictured at right), painted in 1958 by German artist Kurt Schaldach – a World War II refugee that also painted scenes inside Der Rathskeller at the Memorial Union in Madison, including "The Battle of Beer and Wine" – will remain in place but will again be covered (as they have been for years by stained glass panels).

Eitel hopes to plaster vintage Milwaukee rock and roll posters on the boards that will hide the murals as a tie-in to the dozens and dozens of concerts that take place in the ballroom upstairs at Turner Hall. 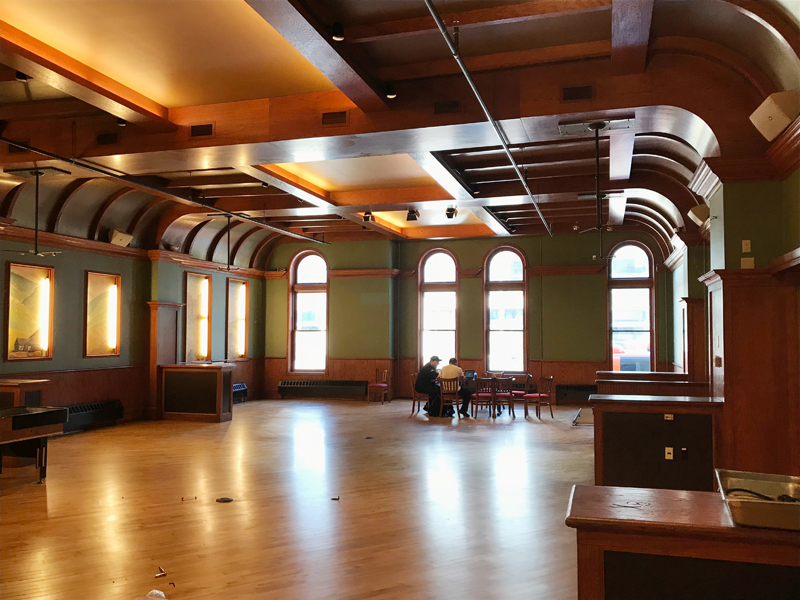 "I don't want to be a rock ‘n’ roll hall of fame for Milwaukee or anything, but we're going to try to find as many old posters from The Globe, The Unicorn, Century Century Hall, The Palms, Papagaio," he says.

"Most people aren't even going to recognize the bands or the venues, but I still think it'd be cool. And we'll keep them updated as we go."