When architect Keith Stachowiak learned that the ballroom flooring at Turner Hall was being replaced, he was immediately interested. Though it wasn't salvageable for re-use as flooring, Stachowiak saved some of the boards and is giving them new life.

Prior to 2011, when an old building was torn down in Milwaukee, chances are you would find Pieter Godfrey there.  Pieter salvaged many of the building materials which would have otherwise been chopped up and sent to a landfill.  His property on the east side just south of the Riverside Park is now owned by the Urban Ecology Center, and much of his land was also donated for the Centennial Arboretum.  For all of the good things Pieter did for Milwaukee and the environment, the gap in architectural salvage that was left when he passed has yet to be filled.

As Pieter was, and as most architects are, I am not only interested in the environment, but I am fascinated by old buildings and how they were constructed.  The highly skilled labor and quality of raw materials just do not exist in modern construction (although arguably they have been replaced by intelligent materials and modern manufacturing processes).  Historic buildings are irreplaceable, and by no means am I am advocate for demolition or even for removing original materials.  However, when demolition is necessary, I’m the first advocate for saving materials for reuse.

When I learned that the ballroom flooring at Turner Hall was being replaced, I was immediately interested.  I know that floor well – over the past 10 years I’ve spilled plenty of beer on it at some of the best shows I’ve seen.  I contacted the owner and the contractor, to find that the floor was not salvageable – at least, not as flooring.  The tongue and groove boards had been sanded and refinished so many times that it the tongues were left exposed in many areas.  In addition – and I’m sure you may have noticed it as well – the floor at Turner Hall is anything but level.  (133 years of differential settlement on a veritable wetland will do that to a building)  As a result, wide gaps between the boards were filled with stale beer and grime. 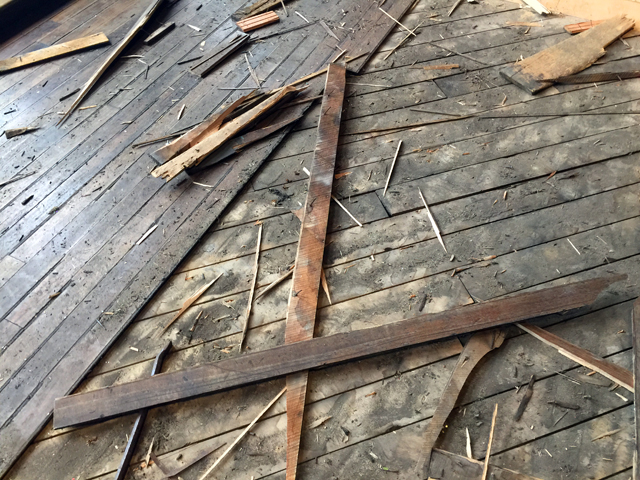 Not knowing exactly what I would find, I asked to be able to dig through the pile of wood to take anything that was salvageable, and they agreed to let me.  I brought along two friends – fellow designers who run an interiors and furniture company, WILO Design, who brought their 20-foot trailer.  In the five hours of sorting through piles, we took everything we could, knowing that what we left would go to the landfill.  They weren’t kidding about how many times it had been refinished.  Of the original ¾-inch thick maple, many of the boards were less than ½-inch thick.

Nonetheless, this is hard maple harvested in 1880s, likely by immigrants to Wisconsin.  It was cut and side matched (tongue and grooved) at a water or steam powered mill.  It was brought to Milwaukee on train cars and brought to the site on carts pulled by horses.  It was pounded by hand with thousands of square nails.  It saw banquets and balls and spectacular events filled with bearded German gymnasts.  It survived two fires, in 1933 and 1941.  It was lonely for nearly 60 years as the ballroom stood vacant.  Then the ballroom was rediscovered, reopened in 2000, and has been witness to hundreds of musicians and weddings and dinners nearly every night of the week for the past 15 years. 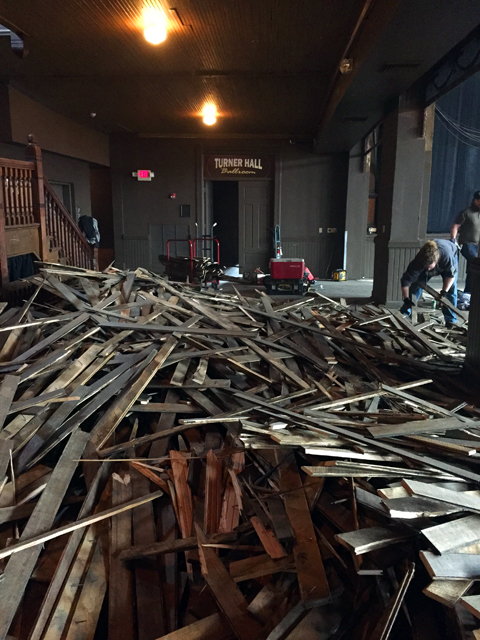 And now that same flooring is going to clad a wall of my house.  That sounds really strange to me now, and almost a little sad.  This idea of down-cycling (or up-cycling, depending on your view) of a material isn’t a new one.  Walk into most hip restaurants on the East Side and Bay View and chances are you’ll see reclaimed wood used for furniture, wall cladding or ceilings.  The character and the spirit of the material are still present – they become artifacts, they create an ambience of environmental consciousness, and they are just really interesting. 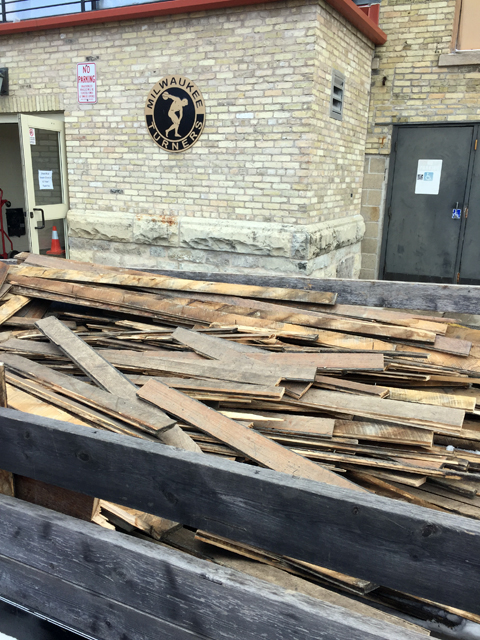 This particular flooring just happens to have a story that everyone can relate to.  If you live in Milwaukee, chances are you have an awesome memory from the Turner Hall Ballroom.  Two of my good friends got married there a few years back, and I remember emphatically dancing to "Macho Man," alone, on that dance floor.  (you know who you are, it was your fault for having an open bar, and you can expect your Turner Hall wood picture frames shortly).

I have nearly 40 man hours into this project already: moving it, sorting it, removing the nails, cutting off the tongue and groove on a table saw (with quite a bit of help from my dad, Keith Stachowiak, Sr., I might add). 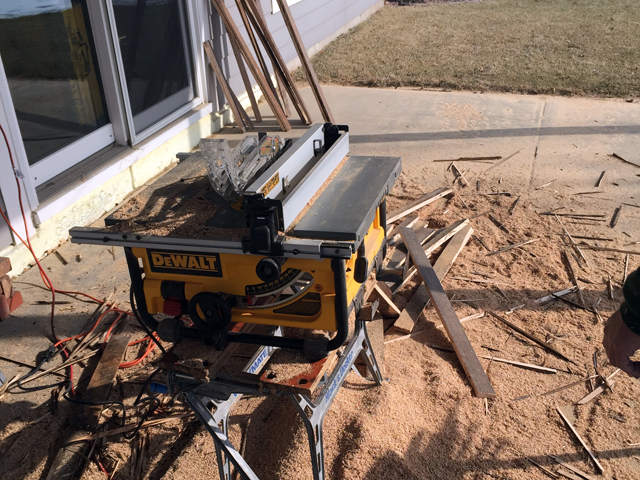 I’ll admit that salvaging materials is not easy, nor do I really understand how it works financially.  If I didn’t do this myself, this would be the most expensive wall cladding ever.

Pieter Godfrey probably would have salvaged this floor.  In his absence, I like to think that he would be happy that there are still people who appreciate the integrity of old materials and don’t want to see them landfilled.  I would like to think he would approve of my wall.  I look forward to visitors at my house inquiring about the flattened gum that I refused to remove from one of the boards:  "Well let me tell you a story…".