Meet Ben Dosmann, who at 22 is a young entrepreneur, owner of Top Notch, a company that cleans beer lines at local taverns. He showed OnMilwaukee.com's Bobby Tanzilo how the job is done.

He’s the son of a retired MPS teacher and a retired MPS principal. His sisters are both public school teachers in Milwaukee, too. His girlfriend? You guessed it. She’s a paraprofessional in MPS.

But Dosmann, who attended MacDowell and Fernwood Montessori Schools and Milwaukee High School of the Arts, wasn’t really much of a school kid. So, to almost no one’s surprise, he hasn’t chosen the family profession.

He’s tattooed and 22 and he works in bars, but Dosmann’s not a college carouser, nor is he a bartender, sharing shots with customers.

No, Ben Dosmann is a young entrepreneur.

Starting out with Sheeley Service, which delivers CO2 to area taverns, Dosmann -- after a brief stint painting houses in San Francisco -- learned how to clean tap lines. A couple years later, he bought the gear and his accounts from Sheeley and struck out on his own.

"They make more money on the beer gas stuff," Dosmann says of Sheeley. "It’s quicker. So, after working for him for two and a half years, we talked about going through a buyout.

"Everything went through smooth," Dosmann says, adding that he maintains a friendly relationship with Sheeley (in fact, Brian Sheeley gave Dosmann a honk and a wave as he drove past while we spoke on the street on the way to a job one sunny morning).

Now as the proprietor and sole employee of Top Notch -- one of a handful of companies cleaning bar lines in the city -- Dosmann works four days a week, makes a good living for someone his age and is happy. He likes his work and he likes the freedom it affords.

Once in a while, Top Notch and Sheeley help each other out, too.

Last week, I joined Dosmann on two of his five jobs that day to get a taste of how beer lines are cleaned.

Dosmann, who arrives with a couple buckets, some tubing, some adaptors, a small pump and a jug of cleaning solution, travels light and unassumingly in his car. Because he lives on the East Side and has so many clients close to home, he’s looking to buy a bike that can move him and his gear more cleanly and economically.

He typically spends about an hour at each of his nearly 40 clients. He visits most of them every other week though some bring him in monthly.

"We push for every bar to be every other week, but it’s under the bartender’s discretion, or the owner I should say," he says, noting that while many places, including Chicago, legislate regular tap line cleaning, Milwaukee has no such laws.

Perhaps counterintuitively at first glance, bars that do a heavier volume require cleaning less frequently because beer is more actively moving through the lines. It’s when the lines are dormant that yeast and other things have a chance to build up and line beer has the chance to get stale.

When we arrive at 9 a.m., the first of two Tosa bars we’re visiting is in cleaning mode, with kitchen and maintenance staff getting the place ready for an 11 a.m. opening.

We head behind the bar and fill up a sink with water, and Dosmann notes the order of the beers on tap, from left to right, and removes the tap spigots and handles and lines them up along the bar in order. Then we go to the basement to turn off, first, the Glycol cooling machine that maintains the temperature of the lines and, second, the gas that fuels the lines.

Typically, CO2 is used, sometimes in a blend with nitrogen. Some bars use nitrogen with specific beers, such as IPAs, to give them the creamy texture most associate with Guinness.

With the list of beers at hand, the lines are disconnected from the metal kegs and looped together using connectors that Dosmann carries in his bucket.

Back upstairs, Dosmann attaches short lines between the taps. One line feeds water from the sink and at the end of the loop another goes back into an open sink. The pump is connected, switched on and the sink full of water runs through the lines. At first, through the clear tubes we can see the yellow beer, slowly replaced with the water, as the system is flushed.

Then, the process is repeated with the cleaning chemical, which is neutralized by the chemistry of the beer. While the liquids pass through the system, replacing the clear water with the blue chemical, Dosmann picks up the discussion of the frequency of cleaning.

"If you’re pouring more beer, you’re more likely to not get them cleaned every other week," he says. "If you’re not pouring a lot of beer, you get line beer, it’s just beer that’s sitting in the lines. It gets stale and if you’re the first one in the bar when they open up, and they pour you that first beer, it’s been sitting there for who knows how long because if they haven’t had big beer sales."

He says that serious craft beer places also like to get their lines cleaned every other week.

"If you’re a bar that has all these craft beers on tap and you want to switch them up every week, every other week, you don’t want any flavor left in the lines. If you’re really a craft beer place, like Blackbird, you have to do them every two weeks to keep those lines fresh."

While we talk, Dosmann takes apart the tap handles and cleans out the parts in each, pointing out which designs are better. There are a lot of details that most folks nursing a beer never consider.

Once the chemical has passed through, water is flushed through again. As the last of the water makes its way out the hose, Dosmann grabs a glass and captures some of it.

Into this water, he puts in a few drops of phenolphthalein to make sure all the cleaning chemical is out of the lines. If it is, the water stays clear. If not, it turns pink. At both stops, the water remains clear, but Dosmann pours a bit of chemical into a glass so he can show me how the color changes when the phenolphthalein mixes with the chemical. 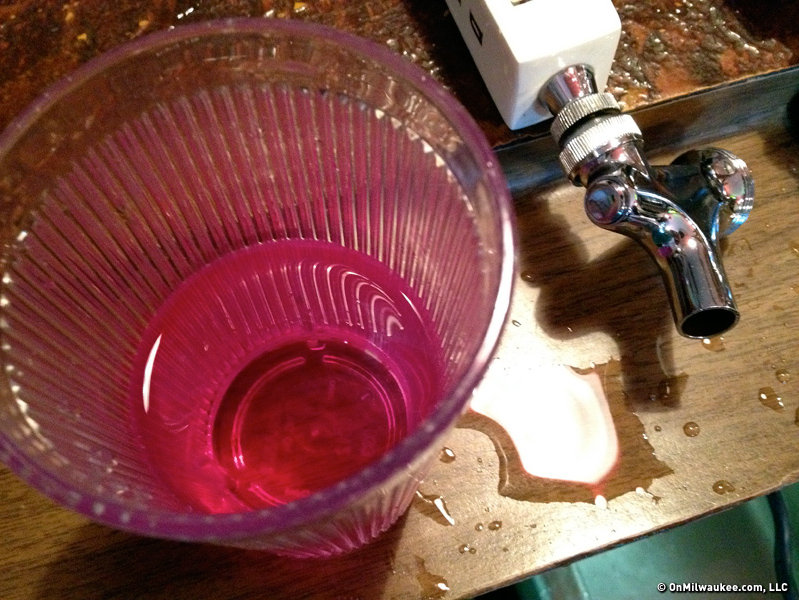 Dosmann explains that among other cleaning solutions, there is a food grade cleaner on the market now, too, but some believe it doesn’t clean as well.

The tubes come off upstairs and the tap handles and spigots go back on and return to the basement cooler with the note pad.
"I write down the order of how I hook them up so when I’m hooking them back up, I don’t put the Milwaukee Brewing Company beer in the Riverwest keg or something, then I’m stuck back here scratching my head, trying to figure out which is which. This way, it’s a little bit easier."

At the bottom of the stairs the glycol line cooling system goes back on, the lines are reattached to the kegs and the gas is turned back on. Upstairs, Dosmann wipes up the areas around the taps, packs up his gear, writes a bill, which he leaves with the crew on duty and we’re off down the street to repeat the process.

Dosmann doesn’t drink while he works, but the job can be a messy one -- he has stories of beer spraying from kegs or shooting out taps -- and he can often walk out of a bar smelling like stale beer.

When I ask if he’s ever been pulled over while driving between clients, he seems to anticipate the question and has a story at the ready.

"They made me get out and do every test possible," he says. "Then he said, ‘your car smells like beer’ and wanted to do a search."

When the officer found trace amounts of beer in one of Dosmann’s buckets, he spied the rest of the gear and understood Dosmann wasn’t hosting a kegger in his car, but was just making his rounds.

There are a few more taps at the next place, but still enough that Dosmann can do them in a single loop. If there are more than 14, he prefers to break it up into two loops. It means double the work, but it’s much more effective because if the system of plastic tubing gets too long, the latter parts of the loop don’t get as clean, in part because the pump isn’t strong enough to clean such a big group of tubes effectively.

Sure, he could take the shortcut and maybe no one would notice, but it’s not his style, hence the name of his company.

"I work harder and better if my name is on it than if I’m just working for someone else," he says.

"Maybe I’ll do something else after a few years," Dosmann muses. "I don’t like doing the same thing all the time."

Maybe he’ll pick up the family trade? He says he might be interested in being a gym teacher or a health teacher or something along those lines.

"I’ve seen the benefits of that," Dosmann says. "My parents were able to retire relatively young. And the summers off. While I’m here cleaning lines, the rest of my family is up north on a lake."

But, not now, he says. He’s young, he’s got money in his pocket and he likes what he’s doing.

"I’ve never been able to understand how people can sit inside with no window, staring at a computer all day," he says. "I get out, move around, I’m enjoying this.

"I like being my own boss. I’ve never been very good at taking orders from people."