Fred Gillich, a designer who started the local business Too Much Metal 15 years ago, decided he wanted to create his own scent. And so, along with the help of a few friends, he concocted Viking Screams, an essential oil for both men and women.

A few years ago, Fred Gillich was biking in a fundraising event for The PabLove Foundation, an organization dedicated to curing childhood cancer, and he found himself particularly aware of the "summer smells" in the air – roses, honeysuckle, lilacs.

Gillich instantly felt infused with energy and serenity. "I’ve always loved how aromatherapy can instantly change my attitude," says Gillich. "I can feel like crap, take a whiff of something and instantly feel better."

Gillich, a designer who started the local business Too Much Metal 15 years ago, decided he wanted to create his own scent. And so he did.

Shortly after deciding to create a signature scent, he serendipitously ran into Jim Gasparick, the owner of Beardy Apothecary and longtime creator of essential oils. Gillich asked Gasparick to create a concoction.

"He nailed it on the first try. It’s a mix of sandalwood, orange blossom, lavender and two scents I can’t give away," says Gillich. "But the two secret scents are what make it all happen."

Gillich named the scent Viking Screams and it’s currently for sale at the Too Much Metal Showroom.

"Viking Screams is the essence of a natural world before the development of plastics and petro," says Gillich. 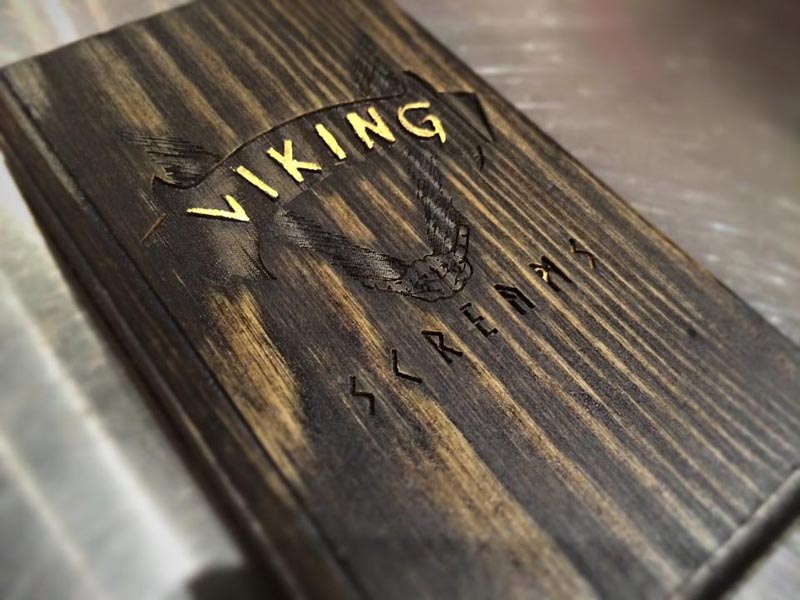 Viking Screams is packaged in six small, travel-sized vials inside a hand-sanded, stained and engrained wooden box. "The small vial is ideal to carry with you in your pocket so you can easily use it when you need it," says Gillich.

Viking Screams, which can also be used as a diffuser, was designed to appeal to both men and women.

"It smells differently on everyone – how it’s worn depends on who you are – but it’s always rad," says Gillich.

The cost is $40 and includes a Viking Screams T-shirt. Go here for more information.

To some, creating an essential oil might sound like a surprising departure for Gillich who has dominated the local T-shirt and hoodie scene with original designs like "Cooler By The Lake" and "Milrockee."

However, Gillich has embarked on adventuresome activities before. A few years ago, he printed posters for the Breast Cancer Coalition with Ghirardelli Chocolate.

"It smelled like chocolate in the studio for months," says Gillich.

To promote Viking Screams, Gillich will host a release party during Gallery Night, April 17, at the Too Much Metal Showroom, located in the Marshall Building, 207 E. Buffalo St. The free event takes place from 5 to 10 p.m.

Local videographer Kenneth Kornacki of KENKO created two commercials for Viking Screams, both of which will be aired in the showroom during the event.

"That dude is a full-on genius wizard," says Gillich. "And when you watch the video, it captures that rush of adrenaline you feel when passion burns through your veins. That's you finding your Viking scream."

The commercials were shot with an iPhone 6 on top of the Marshall Building which, along with the Too Much Metal showroom, houses many other artist spaces and businesses. The commercials feature models Jemme Larson and Jan Dolo and were co-produced by Stan Luberda.

"It doesn’t look like we shot it on top of the Marshall Building, more like a beach or a dessert or an urban wasteland," says Gillich.