When the Philadelphia Eagles face off against the New England Patriots on Sunday, Feb. 4 at the U.S. Bank Stadium in Minneapolis, Milwaukeeans have at least one good reason to cheer.

When the Philadelphia Eagles face off against the New England Patriots on Sunday, Feb. 4 at the U.S. Bank Stadium in Minneapolis, Milwaukeeans have at least one good reason to cheer.

After all, Bubble Waffle Shoppes, a locally owned and operated company, will be debuting their soon-to-be-famous offering: bubble waffles.

Also called egg waffles or egg puffs, these soft, chewy treats were first popularized at the night markets in Hong Kong, where they are called gai daan zai (little eggs). But, by and by, they’ve made it to the U.S., where they’ve become an Instagram sensation.

The bubble waffles, which are made with ingredients including tapioca starch and custard powder, are softer and fluffier than American waffles. And they’re made in special waffle irons that produce waffles in a shape that’s not unlike bubble wrap. From there, the waffles are typically folded into a cone shape, placed in a wrapper and often topped with frosting, sauces, ice cream or sprinkles. 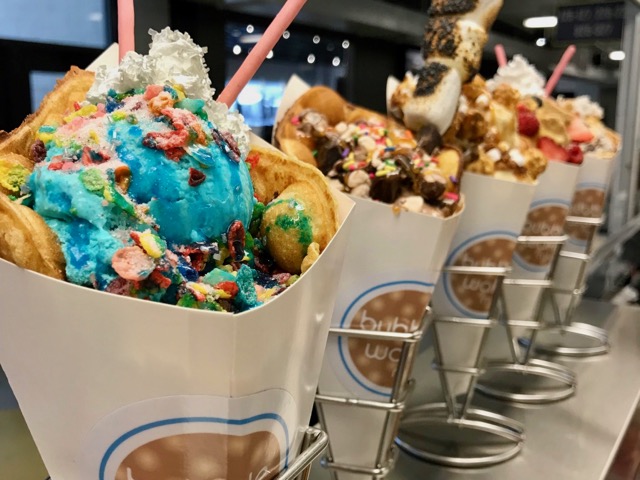 Milwaukee had its first taste of the popular item this past October when longtime festival foods veteran Albert Yee launched his first Bubble Waffle Shoppe at the UW-Milwaukee Panther Arena, 400 W. Kilbourn Ave.

Since then, Yee has created a sensation with his bubble waffle desserts featuring the hot chewy waffles served with guests’ choice of ice cream and any number of delicious toppings, including chocolate, caramel or strawberry sauces, crushed Oreo cookies, strawberries, sprinkles, blueberry compote, lemon curd, fruity pebbles and berry fizz.

Yee, a first generation Chinese-American, was born in Milwaukee and raised in Chicago. He returned to the Cream City at age 25 and, over the past two decades, he’s operated numerous vending operations at countless area festivals.

He says he discovered the bubble waffle phenomenon years ago while visiting family in Guangzhou, China. He brought home numerous waffle irons, but waited for years until the moment was right to launch the business.

"It’s been a very popular business," he says, "From the very beginning. It appeals to a wide variety of people, and it’s really something different."

Nonetheless, he admits it was quite the shock to get the call last month from Aramark, the company who operates food service at the U.S. Bank Stadium. The news was even sweeter when he found out he would be the only independent vendor operating at the Super Bowl game (all other vendors are run by Aramark).

"I’ve been in concessions for a long time," he says. "But I never thought I would reach this level. It happened so quickly."

Since that time, Yee has solidified a deal to put a second Bubble Waffle Shoppe in Mayfair Mall later this spring. He’s also received an offer from another large local venue which is currently in negotiations.

And, despite the fact that going to the Super Bowl has been on Yee's bucket list for decades, he says he doesn’t believe his success is mere good fortune.

"Something extraordinary happened to me on Dec. 26, 2015," he explains. "I was visiting Chicago with friends and they invited to attend a Bible study. At the time, I had no religious background. God was not in my heart. But that night I had an experience unlike any I’ve had before. It was like a rush … and when it happened I cried like a baby. I’ve never felt anything like it before. And from that day on, my life changed. They say that opening your heart to God opens doors. And now I know that it’s really true. So many things have happened since that time, and I have him to thank."

Yee says that, moving forward he’d like to use Bubble Waffle Shoppes to change the way sports and entertainment complexes view dessert. As a result, his goal is to franchise the brand, which he hopes will eventually have a presence in various stadiums throughout the country.

It's a dream come true, says Yee, and the success isn't something he's taking for granted.

"I’m not a big deal," he says. "I’m not one of the big guys like Bartolotta’s. I’m just Albert Yee. But God looks out for the small guys. And now, nothing surprises me. I’m been truly blessed."

The real winners and losers of Super Bowl LVI

The real winners and losers of Super Bowl LV