Looking for a non-beef burger at @Summerfest? In this special edition of the Burger Trail, Lori Fredrich tests out the three veggie burgers on the grounds, reviewing each and ranking them from worst to best.

I’m not a vegetarian (nor a vegan); but I have a deep appreciation for plant-based fare, especially when it’s executed well. I’ve also eaten a lot of veggie burgers over the course of the last 20 years, partly as an effort to reduce my meat consumption and partly due to the fact that sometimes they actually taste pretty good (I still occasionally buy packages of the Historic Trempealeau Hotel walnut burgers they sell at Outpost because they’re just delicious).

So I’ve been somewhat enthused by the introduction of brands like Beyond Meat and the Impossible Burger. After all, the potential that a good meat substitute might just assist Americans in cutting back on their meat consumption is a happy thought from both health and environmental perspectives.

So when I scrolled down the list of menus at Summerfest and saw three spots serving up vegan burgers on the grounds, I decided that I needed to check them out. And I did.

Since I’m presenting my take on three separate burgers, I’m departing from the usual formatting for my Burger Trail series; but I did use the same overall rubric to judge their worthiness. 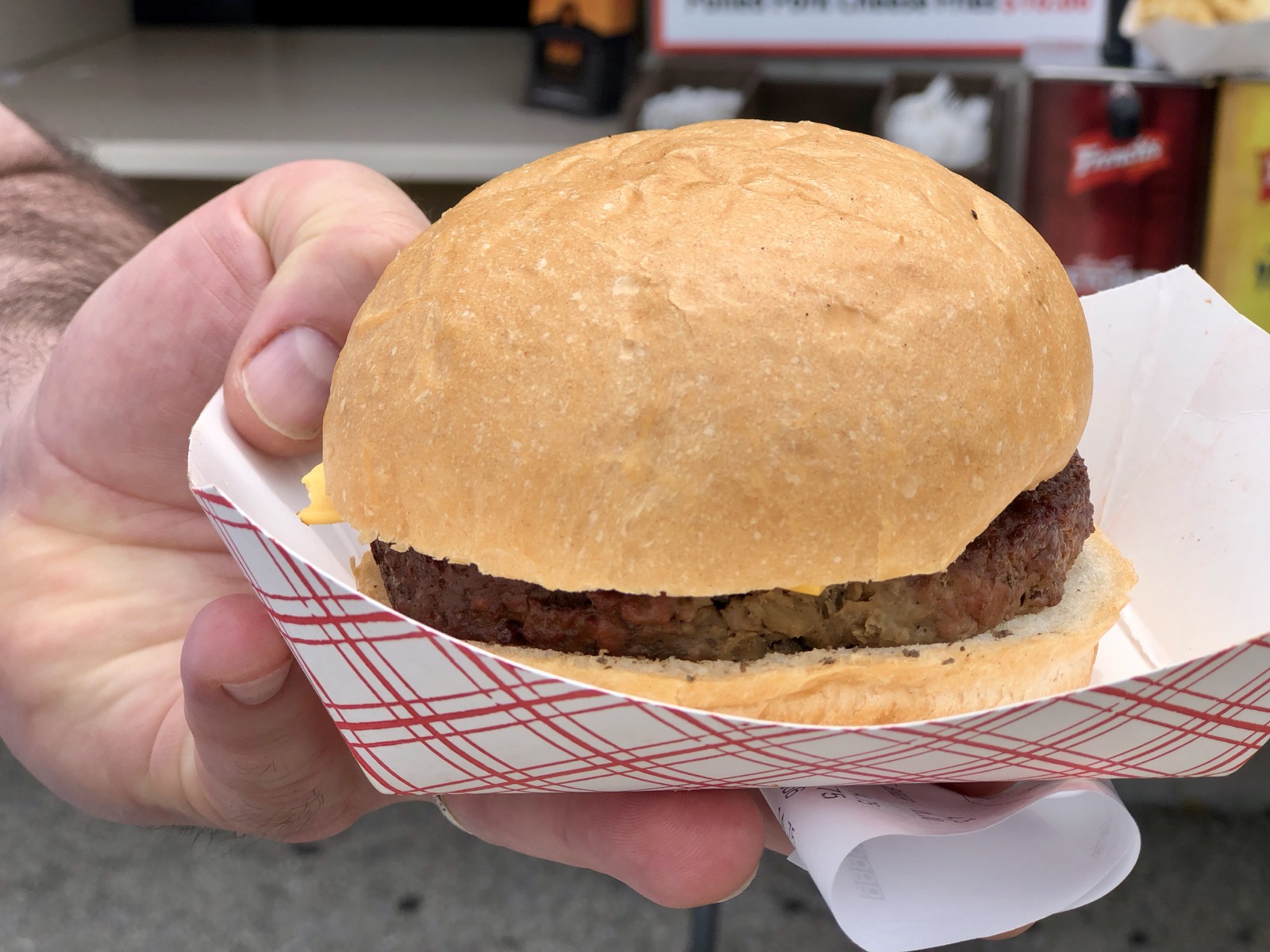 I had high hopes for the burger at Charcoal Grill. After all, if I could get an Impossible Burger that was actually nicely grilled with a bit of smokey flavor, that would be great, right? Nope.

This burger is at the bottom of the bunch for a variety of reasons. The first is the presentation of the burger, which is as plain Jane as they come. It’s an Impossible Burger. On a bun. That’s it.

That’s particularly disheartening since the Charcoal Grill Impossible Burger that I photographed at the Summerfest new foods preview was topped with lettuce, tomato and onion.

Maybe it was a mistake. But the burger I was served had none of those things. The bun wasn’t toasted, and the burger itself was just lukewarm (not even close to warm enough to melt the slice of American cheese they plopped on top).

It’s texture was slightly mushy and very mystery-meat-ish, and its coloration was mostly a greyish brown with very little sign of the Impossible Burger’s signature pinkness (produced by soy leghemoglobin/heme) even on the interior. I didn’t see them cook the burger; but if I had to guess, I’d suspect it was held in a steam tray or the equivalent until being served. It was also as bland as could be, saved only by the ketchup and mustard I added from the condiment bar.

I hate to say it, but there was no vendor on the grounds who could have cared less about me being happy with my Impossible burger. The bright side? There wasn’t an upcharge for the cheese. 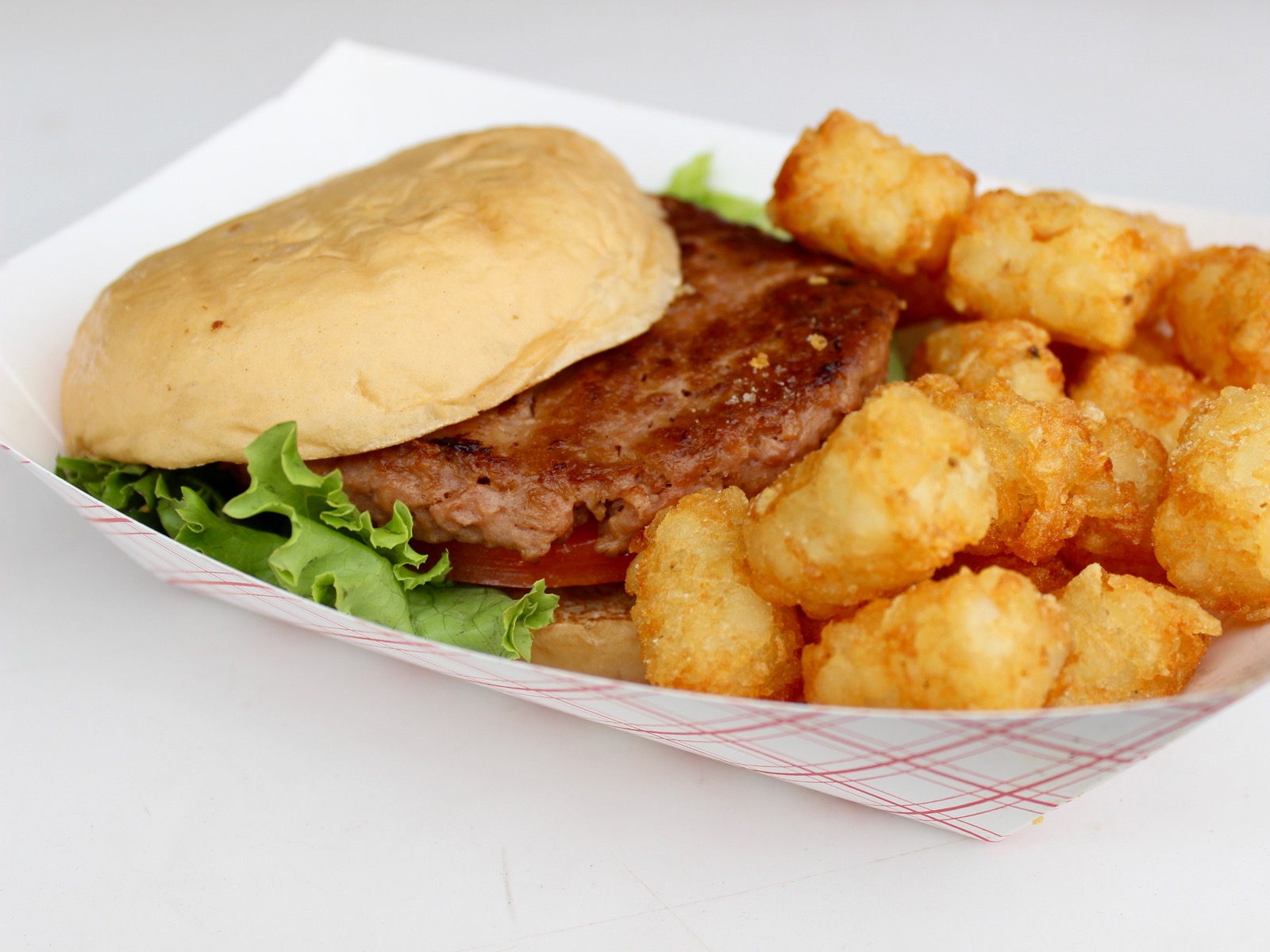 The AJ Bombers Beyond Burger fared quite a bit better. It was well prepared and served piping hot, topped with fresh lettuce and a slice of tomato. For $12, the burger also came with a side of tots.

The bun was soft and nicely toasted, and the burger itself had notable caramelization on the exterior. It also possessed a slightly pink hue thanks to the beet juice used to color the faux meat.

I’ve always appreciated that the Beyond Burger isn’t made with soy, making it a good choice for someone with a soy allergy. But I’ve also been somewhat confused by its mission to resemble meat … because it really doesn’t.

It’s texture is vaguely more meat-like than most veggie patties, and it has a chew to it that gives it an almost grain-like feel. But it tastes like a veggie burger without all the delicious vegetables. Fortunately, it was accompanied by some nice frilly lettuce and a thin slice of tomato – both of which contributed a fresh quality to the burger. I also added a bit of ketchup and mustard … because you need a bit of acid to balance a burger (meat or no meat). Overall, I found this one to be nicely seasoned and satisfying, but just missing a little bit of something.

Find it: Ward’s House of Prime (Ethnic Village)
Cost: $10, served with a side of tater tots 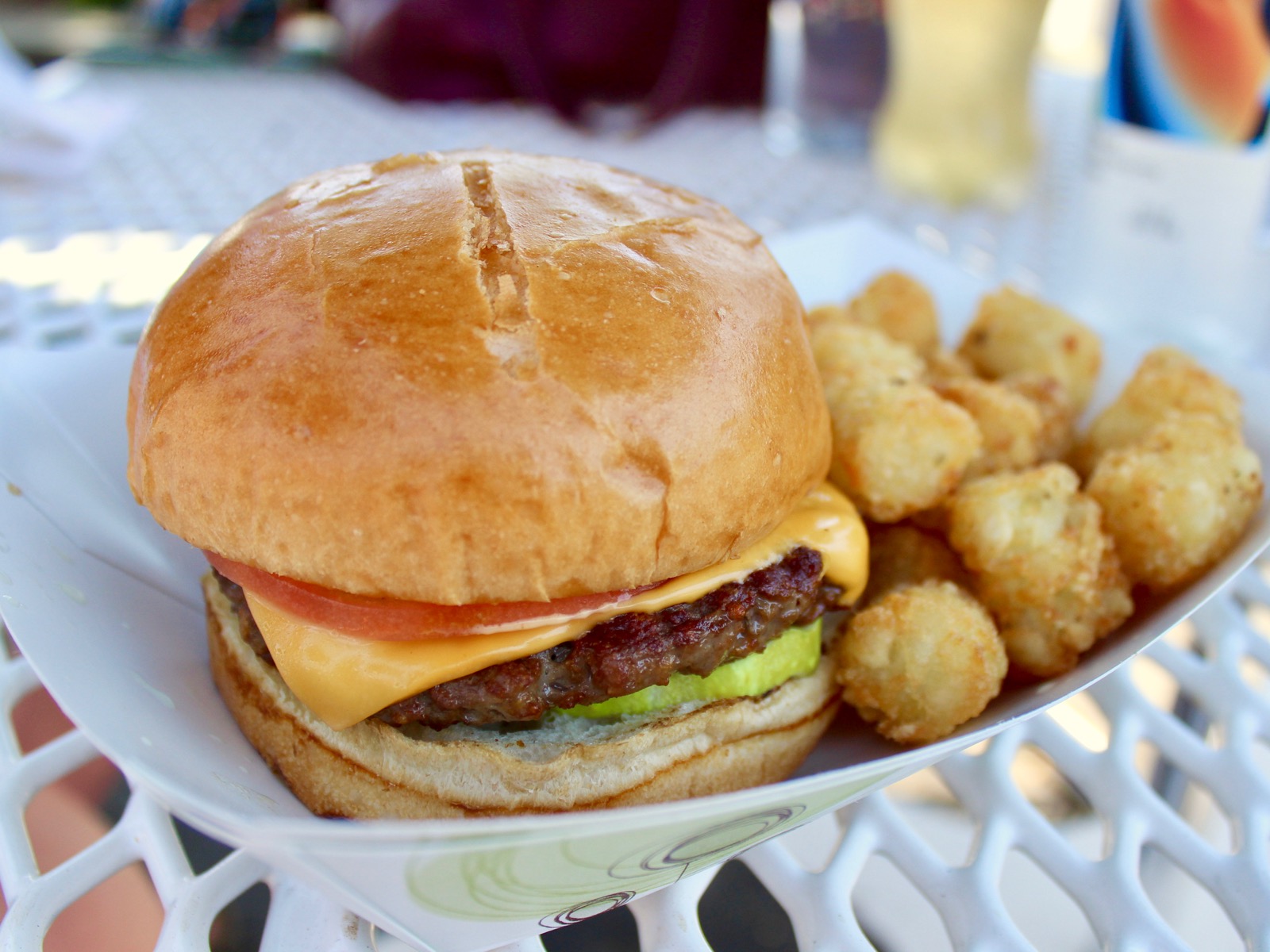 The Ward’s Impossible Burger was the last burger I tried. And, frankly, my expectations were no longer very high. After all, this is a restaurant known for their steaks and whopping portions of prime rib. What investment would they have in creating a veggie-based entree?

Boy, was I wrong.

From the get-go, this burger had a lot going for it. First, it looked like a burger. There were fresh toppings including American cheese, fresh lettuce, tomato and slices of crisp pickles. And the brioche bun was slightly toasted, just as it should be.

The burger was also well prepared. It was browned enough on the exterior to give it a pleasant, burger-like color. The meat was tender and tasty with hints of pink throughout. I shared the burger with a friend who’d never tried an Impossible Burger before, and she (like me) was pretty impressed.

The flavors were nicely balanced. There were elements of freshness, a nice umami from the cheese and a burst of acid (and texture) from the pickles. We didn't even bother adding condiments like ketchup or mustard. You just didn't need them.

Even more impressive is that Ward’s offers two versions of the burger. I ordered the vegetarian version, which comes with cheese and a brioche bun. The vegan version sports a Kaiser roll (sans the butter, milk and egg wash of brioche) and no cheese.

What I’d love to see

I think it’s great that there are more restaurants making an effort to accommodate their non-meat-eating customers. Festivals like Summerfest have always been notoriously difficult places to find substantial vegetarian and vegan options, so it’s encouraging that venues are making an effort.

But the food-lover in me wants to see the veggie burger trend get a little bit more exciting. Order a beef-based burger at most places and you’ll see toppings like smoked bacon, beautifully melted cheese, fried onions and bbq-sauced pulled pork – all of which add additional flavor and a bit of variety to the mix.

The veggie burgers, on the other hand, are treated more austerely. Usually, there’s just one option. Sometimes it’s served as plain as can be, as if it’s simply an afterthought. Other times, the toppings are so basic that it’s almost as if it’s assumed that folks who don’t eat meat don’t like flavor.

Without thinking hard at all, I can think of a slew of delicious things you could throw atop a vegan burger: pickles, jalapenos, salsa, onions, sauteed peppers, avocadoes… the list goes on. Even better, how tough would it be to invest in a slice or two of nut-based cheese, just to add a bit of salty umami?

Let’s put it this way: I have high hopes that someday the non-meat burger will go beyond being simply a placation and become a truly delicious offering. An Impossible Burger with fried mushrooms and caramelized onions, anyone?