Recently I had the opportunity to spend a long weekend in La Crosse. While I was there, I had the treat of staying at the Charmant, a boutique hotel managed by Aparium Hotel Group, the operators of Milwaukee's Iron Horse Hotel.

In a world where it’s all about the hustle, it’s often good to get away. It’s all-too-easy to get lost in the static; and even as little as a weekend spent in another city offers a chance to refocus and take time to truly live in the moment.

Recently I had the opportunity to spend a long weekend in La Crosse. While I was there, I had the treat of staying at the Charmant, a boutique hotel managed by Aparium Hotel Group, the operators of Milwaukee’s Iron Horse Hotel.

Aparium is known for its unique boutique hotels, many of which are located in repurposed historic buildings. And so it is with the Charmant, an impressively welcoming hotel with a story that ties back to a very sweet spot in La Crosse’s history.

The word charmant means "charming" in French. It's a subtle nod to the hotel’s commitment to creating an exceptional guest experience. But it’s also a direct reference to the premium line of chocolates once manufactured and sold by the Joseph B. Funke Candy Company, a business which occupied the site for the hotel in the early 1900s.

Built in 1898, the Joseph B. Funke Candy Company was the largest of three candy operations located in La Crosse. During the 1920s, Funke made more than 160 kinds of chocolates along with 500 other types of candy including bulk chocolate, candy bars, stick candy, cream candy and hard candy. It was, at one point, the city’s largest employer, boasting 220 employees at peak production.

And, as the story goes, even the president of the United States was privy to Funke chocolates; a box was sent to the White House every year as a gift. 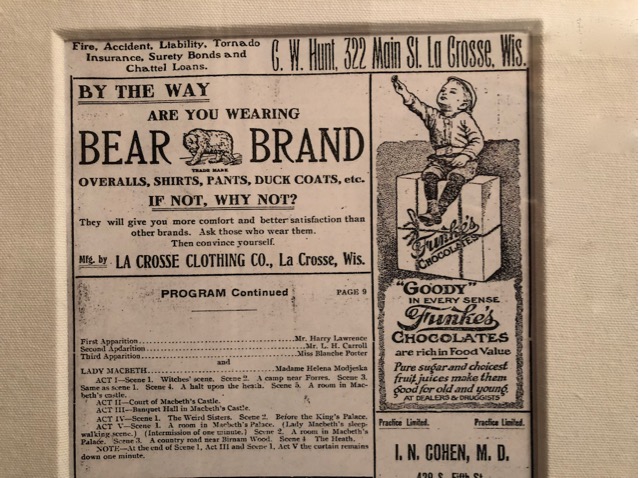 The factory closed in 1933 during the Great Depression; but in its heyday it was among the top 5 candy companies in the U.S. Over the decades that followed their closing, the factory became home to a number of different companies and eventually a large retail showroom that led the building to become widely known as the Ross Furniture Building.

Thanks to a $30 million renovation spearheaded by Chicago-based Aparium Hotel Group and owner Weber Holdings, the building was reborn in 2015 as the city’s first boutique hotel. The hotel’s design was enacted by the award-winning Simeone Deary Design Group and Milwaukee’s own Kubala Washatko Architects. Among historical features retained during the renovation are insulated wooden paneled walls on the south side of the building, as well as the a replica of the rooftop water tower.

And the hotel pays homage to the history of the building with sweet perks like locally made chocolates to nibble at check-in (along with a Sweets Bar where you can purchase more), complimentary coffee tokens and plenty of nods to La Crosse’s chocolate-filled history (and historic charm) throughout the hotel’s spaces. 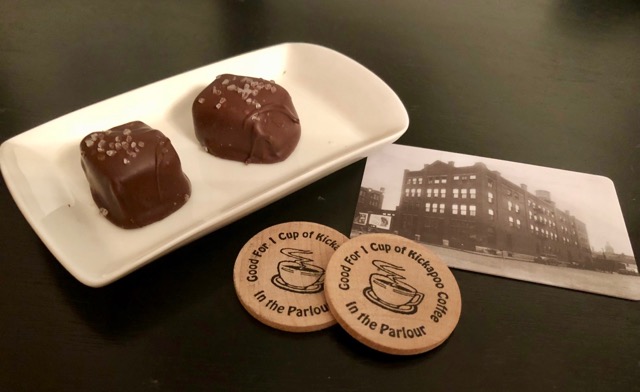 The Charmant’s location is ideal. It overlooks the banks of the Mississippi River and Riverside Park, a picturesque green space featuring trails and myriad spots to enjoy views of the river.

Just one block from Main Street in historic Downtown LaCrosse, the hotel is within walking distance of a host of independently owned shops, including thrift stores, consignment shops and boutiques. If you're interested in antiques be sure to stop at The Antique Center of LaCrosse, which sports 20,000 square feet of space on a sprawling three floors, making it one of the largest in the state. Explore on foot or borrow a bike from the Charmant's front desk for a bit of urban exploring.

There are also plenty of great restaurants, area vineyards, breweries, historical sites and museums within a short driving distance of the hotel. Read highlights of our La Crosse stay here. 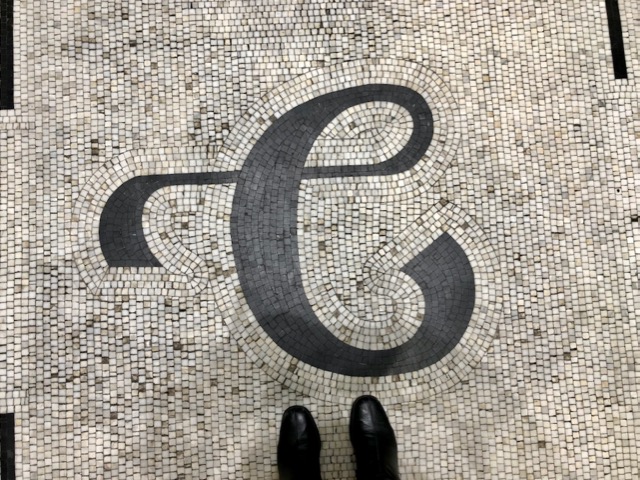 During our stay, we occupied a room on the second floor, which historically functioned as the production floor for Funke.

Our room (a classic Salle King) was well appointed with an especially comfortable euro-top king bed and chic retro decor that hearkens back to the golden age of the building in the 1920s. Rich neutral hues pop against exposed brick. Meanwhile repurposed hardwood floors from the former chocolate factory are augmented with an inlay of carpeting. 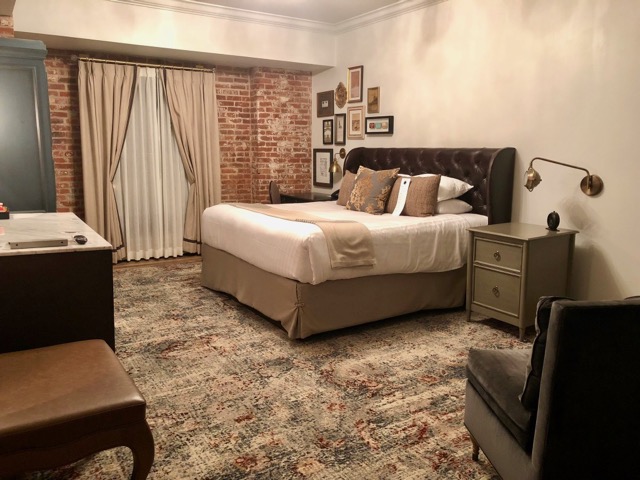 A quaint sitting area offered comfortable seating in which to lounge, or simply rest to put on your shoes. 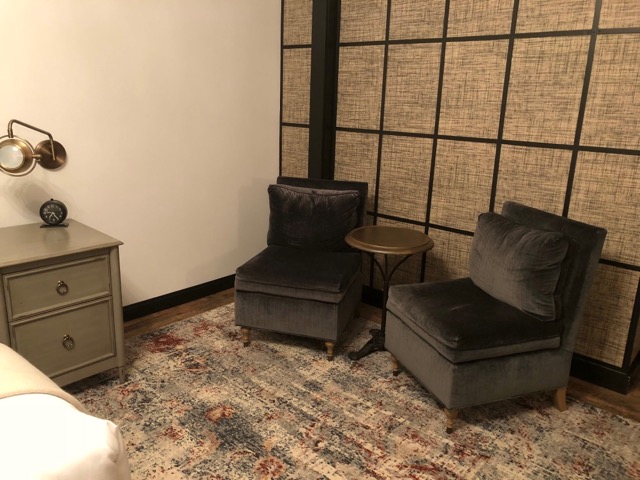 The walls were smattered with framed newspaper clippings, retro photos and small shadow boxes displaying vintage candy packaging. And yet the room was simultaneously enhanced with modern creature comforts like a 48-inch flat-screen high-definition TV and Bongo Bluetooth speaker. And, instead of an in-room coffee maker, there were tokens good for cups of locally roasted Kickapoo Coffee (a special Charmant blend) in the downstairs Parlour. 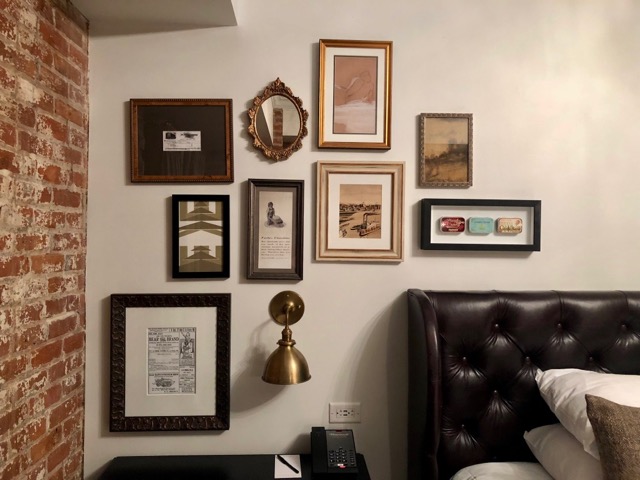 The Parlour itself was once a loading dock for the building. Trucks would drive through the archway to load Funke candies for delivery. 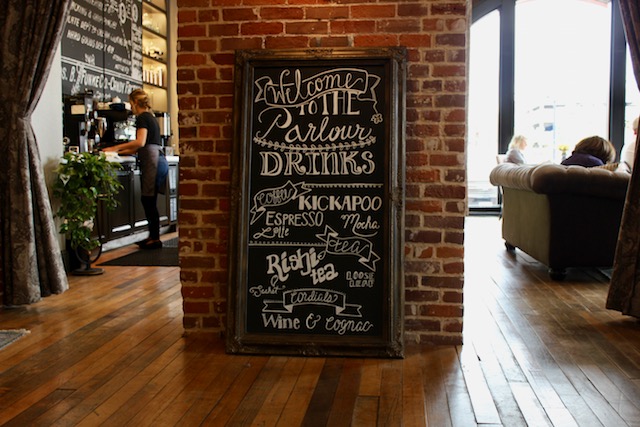 These days, the arches have been replaced by beautiful floor to ceiling windows and the space has been enclosed and filled with comfortable furniture and a cozy fireplace. 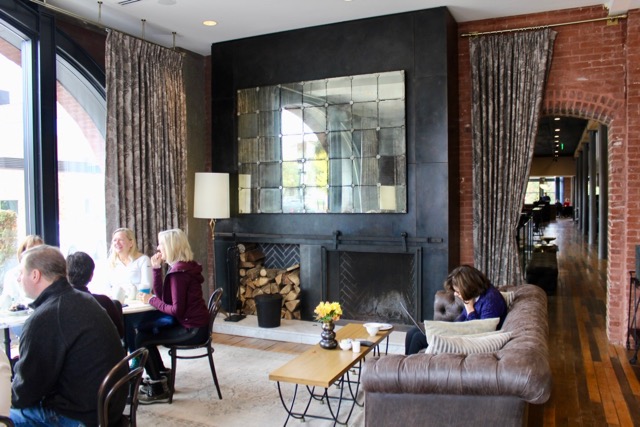 An adjacent bar and lounge offers a casual space to linger and enjoy beer (including the hotel’s custom 1898 Saison custom brewed by local Pearl Street Brewery), wine or cocktails. Coincidentally, the latter were developed under the guidance of employees of Milwaukee’s own Bittercube, a bitters company that also offers cocktail consulting services for bars and restaurants. 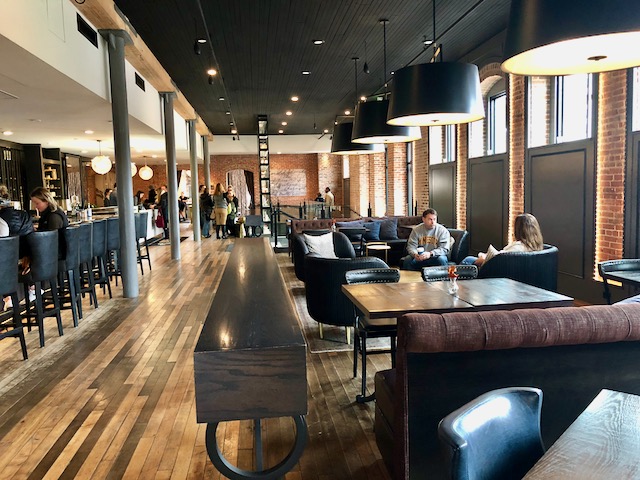 During "Charming Hour," which takes place Monday through Thursday from 4 to 6 p.m., guests can enjoy $6 old fashioneds or wine pours along with $3 PBR Tall Boys and $4 1898 Charmant Saison. There are also $5 burgers and other specially priced food items available. On Friday evenings, the lounge features performances from local singer songwriters.

From mid-April to mid-October, guests can also enjoy the hotel's Rooftop Terrace, a space which offers gorgeous views of Downtown La Crosse along with a full bar, a menu of bar snacks and the only wood-fired pizza in the city. Sadly, we were a bit late for the rooftop; but, that’s an experience for our next trip.

Charmant is also home to The Restaurant a casual upscale eatery where Chef Kevin Micheli oversees a menu of rustic French-inspired cuisine for breakfast, lunch and dinner. 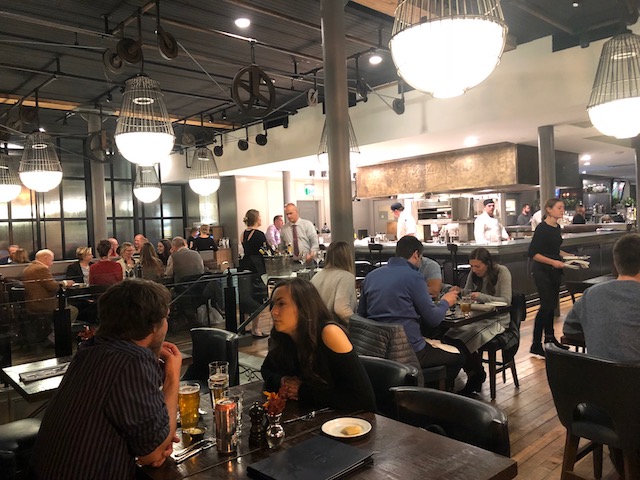 The evening we arrived, the restaurant was hopping with a mix of locals and visitors. When we sat down for dinner around 8 p.m., the open kitchen was bustling as the chefs prepped and plated dishes for the eager crowd. 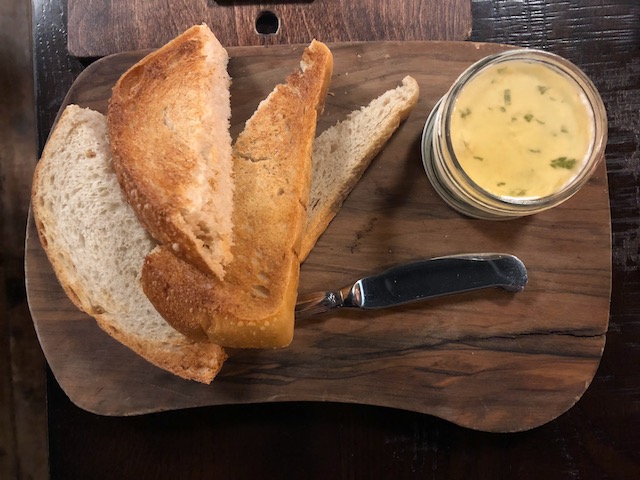 We also enjoyed housemade pappardelle with sausage, kale, chilies and lemon ($18) and Brussels sprouts served with heirloom squash and maple ($7, both pictured below). However, we could have been tempted by myriad options including casual fare like a chef burger ($15), French bistro classics like flat-iron steak with béarnaise and frites ($29), duck a l’orange ($19) and entrees like seared trout with arugula, wild mushrooms, nasturtium and lemon ($24). 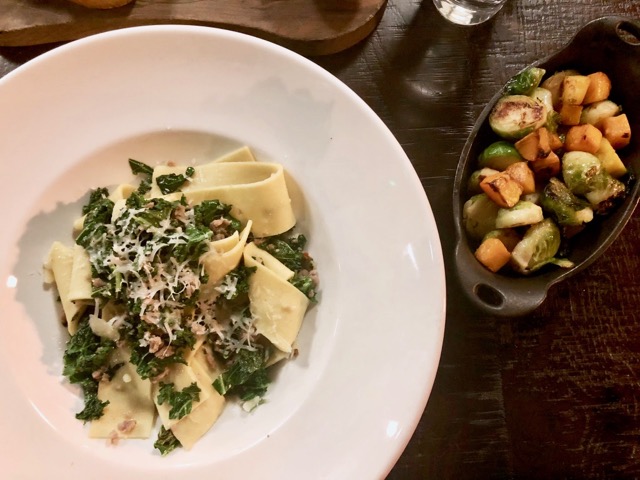 For dessert, we tried the signature Funke Bar a la mode: a chocolate coated nougatine bar served on a bed of crushed pretzels with a scoop of locally made Pearl Street ice cream. 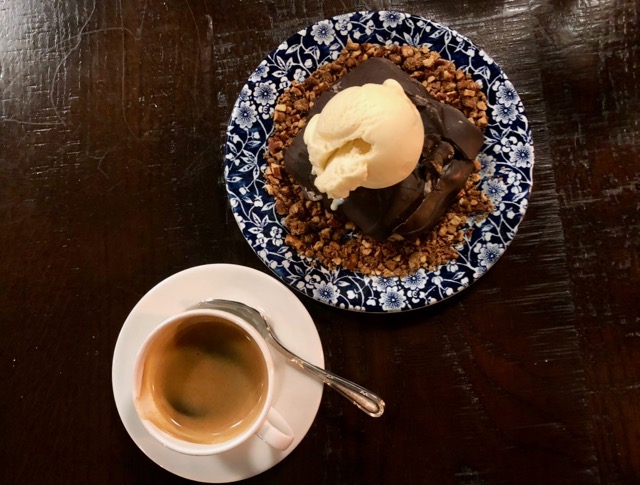 Celebrate the holidays in LaCrosse

If you’re planning a weekend getaway during the holiday season, the Charmant Hotel might just be the perfect place to cozy up and get into the spirit. During the city’s annual Rotary Lights display, which kicks off on Nov. 24, La Crosse’s Riverside Park along the picturesque Mississippi River is illuminated by more than than 4,000,000 lights. And, thanks to the floor-to-ceiling windows in The Restaurant, you can enjoy a wonderful view of the display while indulging in a special prix fixe menu. 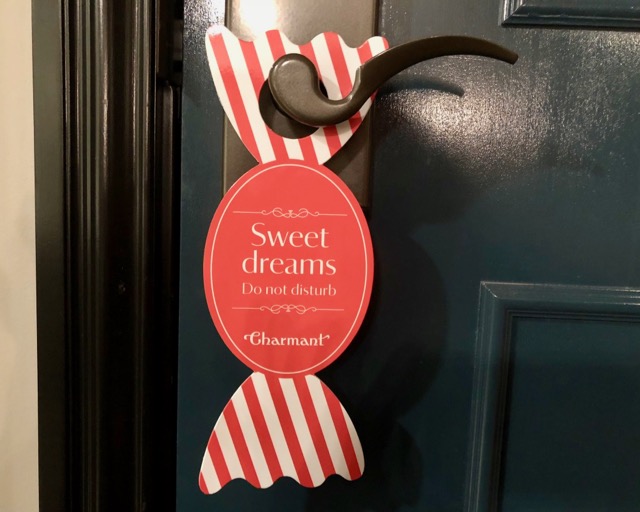