About four months after she moved back to Milwaukee, Melissa Thornton called her mom and said she wasn't sure what exactly she was going to do, but she knew she was going to somehow "leave her mark" in Milwaukee.

The "Coming Home" series, brought to you by the Milwaukee Art Museum, explores the lives of Milwaukeeans who moved away but ultimately returned to make a difference. The series is in conjunction with three current exhibitions at the Museum that expose how travel provides different ways to see the world and the everyday. Learn more about the Museum's season of travel at mam.org/travel

Melissa Thornton moved back to Milwaukee during the blizzardy winter of 2011 after living in Florida for five years. She wasn’t thrilled about returning to Brew City, but after experiencing a breakup, she wanted to live near her family.

When spring rolled around, Thornton started to get out more and, eventually, like the weather, started to warm up.

"I realized how much Milwaukee had changed in the past five years," says Thornton. "There were so many new restaurants, so many things to do. It was extremely vibrant."

She also realized how much she missed cultural aspects of the city, from the art and the architecture to the friendliness of the people.

"Where I lived in Florida, everything is so new and most of the paintings were of palm trees," says Thornton.

About four months after she moved, Thornton called her mom and said she wasn't sure what exactly she was going to do, but she knew she was going to somehow "leave her mark" in Milwaukee. Thornton, a graduate of the Milwaukee Institute of Art and Design (MIAD), had worked in advertising as a graphic designer and she considered returning to the field.

Around the same time, she was feeling more and more Milwaukee pride and so, just for fun, she created a T-shirt for herself and a friend through zazzle.com. The shirt featured only two words: MilwaukeeHome.

"For me, it was a personal statement that this was truly my home and where I was going to settle," says Thornton.

Every time she wore the shirt, someone asked her where she got it, so she decided to make a batch of MilwaukeeHome shirts to sell. Thornton used her design skills to boldly and attractively stack the letters and printed the first batch of shirts herself.

"I created something out of love for the city of Milwaukee by accident," she says. "And it really resonated with people."

While printing the shirts, Thornton made a "mistake" that would later define the brand.

"At first the shirts just had the words on it, no box. But then I accidentally reversed the screen (during the printing process) and the box was born. I was like, ‘wow that’s so much cooler,'" she says. 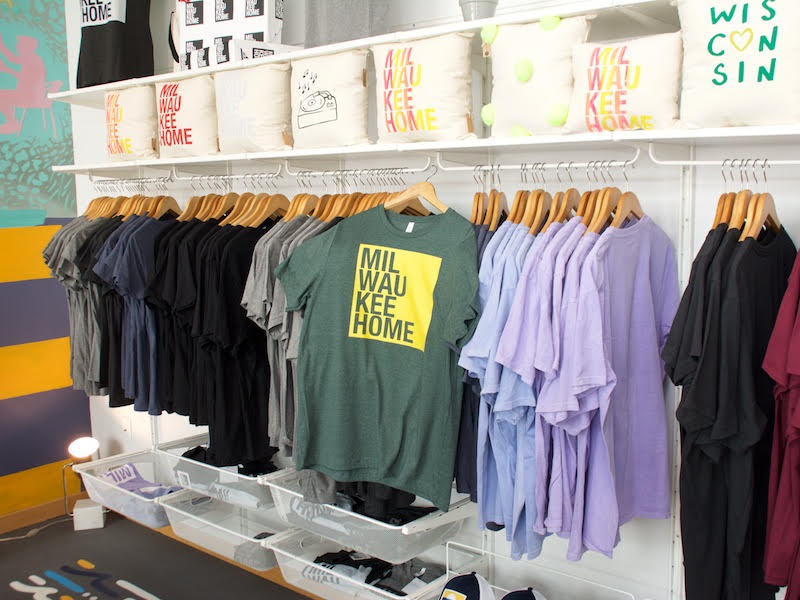 After selling shirts at festivals for a year, Thornton moved into a Third Ward work/live space at 159 N. Jackson St. She’s been in the space for five years and has expanded her wares beyond apparel, selling a variety of fun gifts and household items like pillows, coasters, puzzles, baby and pet items, greeting cards, soaps, mugs and more – all made by local artists. 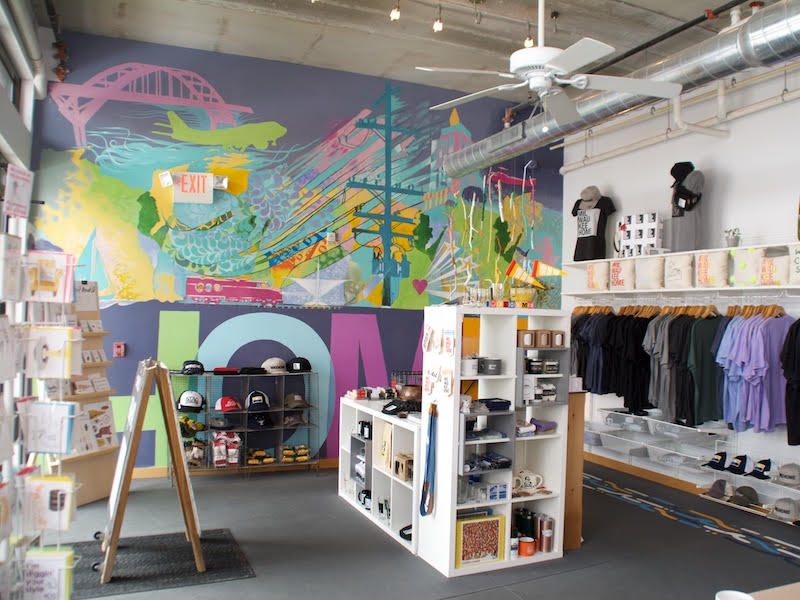 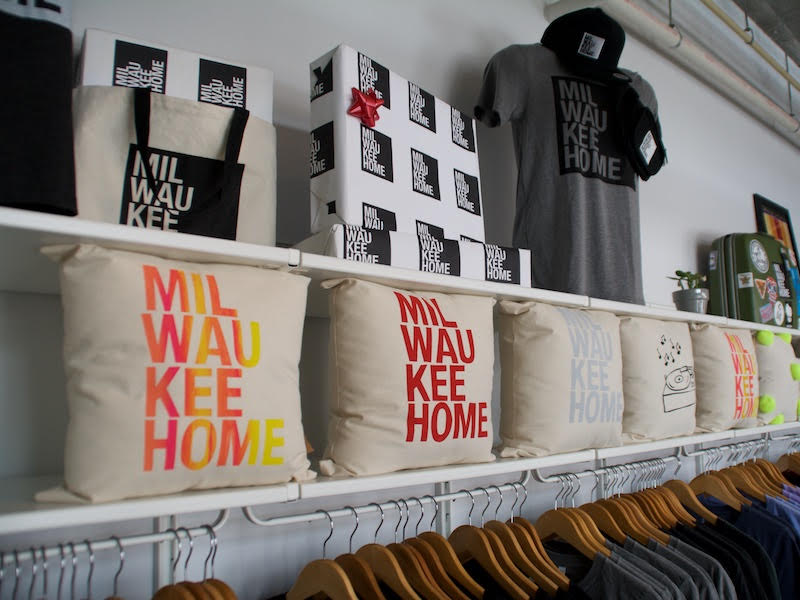 "Milwaukee Home stands for all of Milwaukee," says Thornton. "I want to be a shop where people can come and get a piece of Milwaukee culture."

Thornton has also collaborated with many other local brands, including Koss Headphones. Koss created MilwaukeeHome headphones and speakers and installed a listening station made from an old phone booth in the MilwaukeeHome store where people can try out the headphones.

"I’ve been lucky," says Thornton. "Everyone’s reached out to me."

Pabst Blue Ribbon and MilwaukeeHome partnered to create a very-limited-edition Pabst/MilwaukeeHome T-shirt. They only printed 100 of the shirts and Thornton posted onto Facebook that she would be selling them at Rogue’s Gallery for one night only. The $30 shirts sold out in minutes and Thornton later witnessed a guy offer someone $200 in cash for their shirt – and the offer was accepted.

Thornton says she feels camaraderie, not competition, with other Milwaukee T-shirt makers.

"Small business life is hard. People think it’s glamorous, but it’s not," says Thornton. "It’s nice having other small business owners as friends because they really get it."

Thornton trademarked the MilwaukeeHome logo as well as similar logos for 13 other cities. She plans to license her brand in the near future.

"I was really going for it but then I got a little distracted by falling in love and having a baby," says Thornton.

Last year, Thornton and her husband and their now-18-month-old son moved from above the store to a house in Bay View. 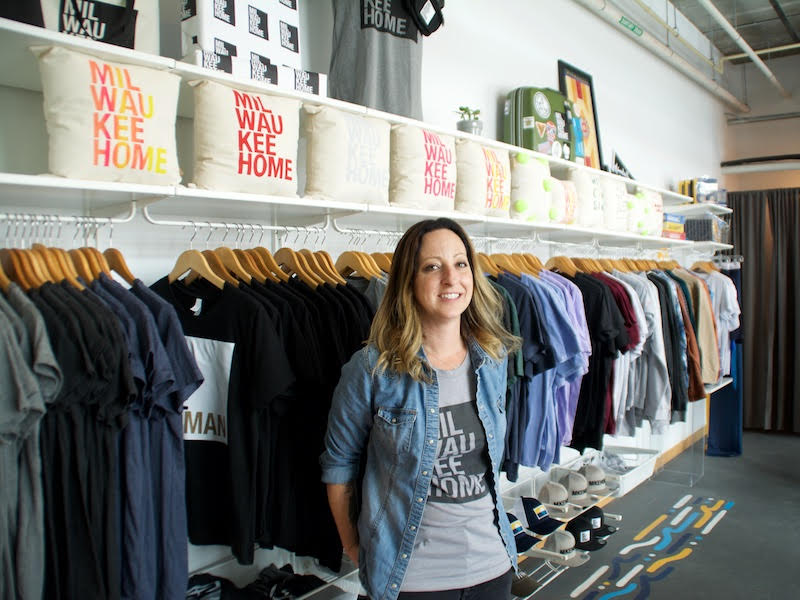