From terrific opening acts to Sam Hunt's headliner-worthy show and Mother Nature stealing the show near the end, day one of Country Thunder roared into Wisconsin with style and song.

By Lora Kaelber Special to OnMilwaukee.com Published Jul 20, 2018 at 10:01 AM Photography: Dan Garcia

Editor's note: A woman was struck by lightning Thursday night at Country Thunder, unbeknownst to us at the time this article's original headline was published. We regret the error, and the headline has been changed out of respect to the victim.

You guys, day one of Country Thunder was just. So. Cool. (Literally. Even the weather cooperated, as it wasn’t your typical "oh my gosh, I’m sweating like a Georgia hog" heat. I’m definitely not complaining.) People always sort of trickle into the Thunder Bowl throughout the day – but, man, that meant they missed the first two acts, Michael Keys and Filmore.

Hailing from the south side of Chicago, Keys was the winner of the Big 95.5 contest. It doesn’t matter what his competition was like: From note one, it was super clear that this guy deserved to be on stage. His half-hour acoustic set was packed with original songs. My favorite – "Better Day," about finding hope on your worst days – really soared in the Bowl. I hope someone finds this guy and drags him to Nashville.

Shortly after was 24-year-old Missouri native Filmore, who moved to Nashville shortly after graduating from college. The kid has moves and the music to match. Even though the Bowl and the reserved seats were still sparsely filled, he laid down track after track of high-energy hits, including some of his recently released original music. His music feels like beach country and reggae and grit all rolled into one. He’s good. You’ll be hearing from him soon.

Singer-songwriter Adam Sanders hit the stage next. He’s been writing for some big names, including Luke Bryan and Dierks Bentley, but his goal has always been to be an artist in his own right. And that’s starting to happen for Sanders. With his debut self-titled EP now out, he’s getting his music to fans. He laid down a really solid set filled with songs he’s written for others and original songs he’s kept for himself. If Sanders keeps up like he’s been going, you’ll see him at bigger venues in the near future.

Cale Dodds took the stage just as it started to rain. The weather, though, couldn’t touch his set. He blew onto the stage with high energy and didn’t let up for his hour-long set. Dodds had them dancing in the aisles. Smooth of voice, brilliant of lyric, the Georgia native and Rolling Stone "Country Artist You Need to Know" blew it up for the gathering crowd.

The rain had all but stopped by the time Midland came out of the gate swinging – hard. It was an incredible set, filled with all their hits, some songs that weren’t so familiar and some feels-like-home covers.

The thing I absolutely love about Midland is that they are so filled with joy, it almost makes you laugh – and certainly makes you grin. The guitar players dance around stage with semi-coordinated movements that kind of make you giggle. They remind me of boys I knew growing up, truly just doing what they do for the pure joy of doing it, and if they laughed – and if you laughed – along the way, so much the better.

The Midland boys are at home in their skin. They look like they jumped right out of the '70s with their bushy hair and retro clothing. Their music, too, reminds you of an easier time in country music. They are mellow and filled with such flavor – seriously, can you tell I’m a fan?

They had so many great songs in their set, but I gotta say "Gator Boys," with a little bit of a mess-up by the band, and then "Jack and Diane" and "Dust on the Bottle" thrown in for kicks had to be one of my favorites.

Also, I need to explain something here. Last year, the break between the reserved seats and the general seats was a wooden fence with a security metal fence. But they were still right next to each other with no separation – which, you know, when people got a little tipped and their favorite artist was playing, the temptation was really high to jump the fence into the reserved section to get just that much closer.

But this year, there's about three feet between the permanent wooden fence and the metal security fence. Which creates what? Yes, that's right: a walkway.

So, towards the middle of Midland’s set, lead singer Mark Wystrach sauntered out on the catwalk during a marvelous version of Alabama’s "Dixieland Delight" and – wouldn’t you know it – he came off the catwalk, walked up to the sound board and took full advantage of the walkway, serenading the crowd in general seating. And they went nuts. Understandably so. Just a really cool moment. 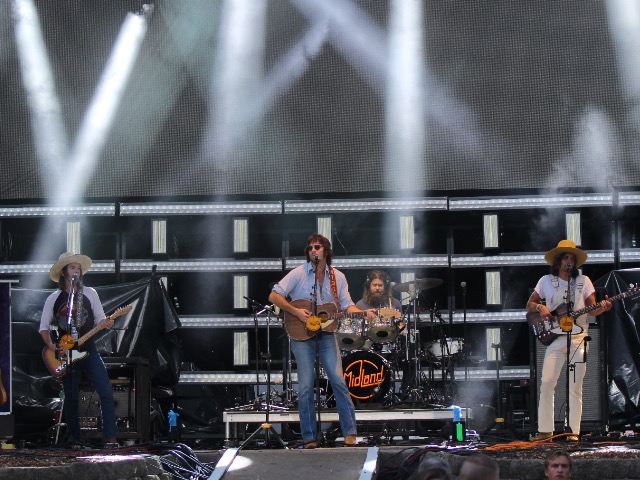 After that, the band just kept rolling on through. After a wonderful version of "Altitude Adjustment" dedicated to Willie Nelson, who said that such a thing was needed from time to time, Midland’s lead singer once again walked out on the catwalk to talk about music that inspires them. They play from the heart. He said, with the band playing a really trippy intro to Seger’s "Turn the Page" in the background, that for them, it’s always been about one thing: the music.

Seriously, Midland is a band that when they come to town next, you must, must see.

And then, a bit after 10 p.m., Sam Hunt flew out on the stage. Pretty much almost literally. The man was dancing like his feet were on fire – only, like, good. Really good. He didn’t stop moving for nearly six songs. He laid down three successive hits right off the bat: "Downtown’s Dead," "Leave the Light On" and "Ex to See."

The man is just an artist down to every little detail, from volcano-like steam explosions on stage to an almost staggering light and video display, making it an all around sensory experience. He took time to sign autographs on the catwalk and to tell stories. 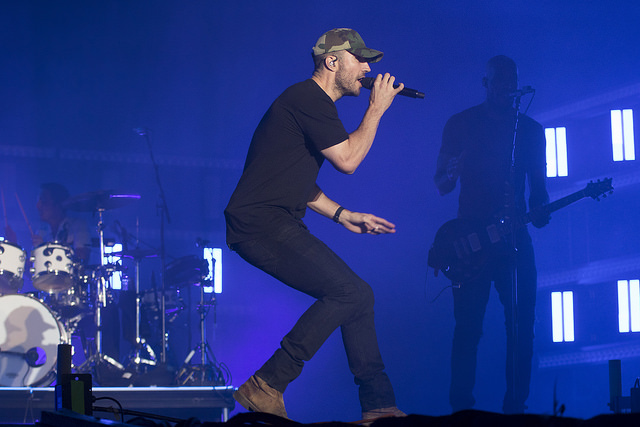 One thing really that I knew but didn’t really hit home until I heard them all played one after another: Sam Hunt is a killer songwriter. He’s written so many songs for so many artists that it's truly hard to remember just how much he has influenced the genre in the last decade. He told the story of how Billy Currington recording Hunt’s song "We Are Tonight" saved his band from starving out on the road and how that led to where they are now. "Cop Car," recorded by Keith Urban, and "I Met a Girl," recorded by William Michael Morgan, both involve experiences with a young woman who is now Hunt’s wife.

The version of "I Met a Girl" that Hunt and his band played on Thursday night was a really laid back, lyrically beautiful one with sweet, sweet harmonies. It’s a totally appropriate spot here to note just how talented the musicians are in Hunt’s band.

They took a break from their own music, noting that they’d spent a long time this year opening for Luke Bryan. Bryan, they said, has a lot of traditional country fans, and when Hunt first moved to Nashville, he noticed that one thing that sets the city apart from any other is that live music is being played all over from ten in the morning to all hours of the night in little honkytonk clubs. So they decided to put together a honkytonk set which they booted for the Thunder crowd to lots of screams and singing along. So cool. 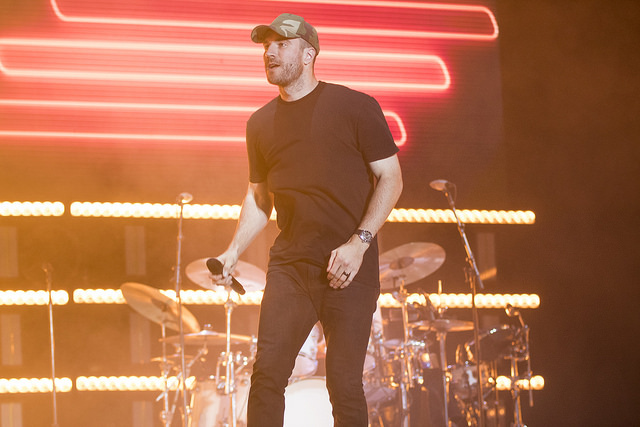 Right on the heels of that came "House Party" where Sam Hunt brought the house down. The Thunder stage is elevated, and between the crowd and the stage, there’s a hill with flowers and landscaping held back by about a four-foot concrete retaining wall. Artists will periodically go play on the hill as a way to get closer to the audience.

But that definitely wasn’t good enough for Hunt.

He climbed down the hill, all while belting out "House Party." He got down and starting high and low fiving members of the crowd, running – yes, running – through the reserved section to the general seats. Oh and you guys, SAM HUNT HIGH FIVED ME! AHHHH! Um, yeah, fan girl moment. And yep, I’m still totally grinning. He ran back, jumped over the fence and sang his way through "House Party" to a crazy frenzied crowd. So, so awesome.

I didn’t stop listening at that point, but I really wondered how he could top a moment like that – and well, he didn’t. But Mother Nature did.

After laying down one superb song after another – including "Break Up in a Small Town" and "Raised on It" – he sat down at the piano for the first song of his encore, playing "Make You Miss Me." Then, just as he and the band started in on "Body Like a Backroad," lightning could be seen streaking through the clouds. But a few lines in, the skies absolutely opened up. It was a moment that no one could have scripted any better: Sam Hunt singing his most popular song outside on a summer night and the skies light up. Amazing. 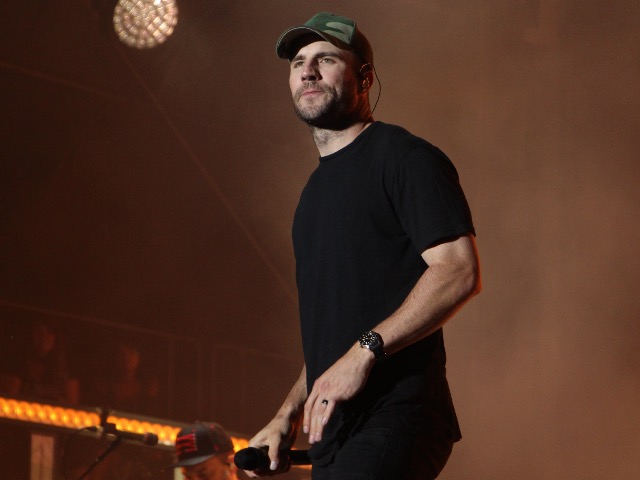 And just like that, after almost nine hours of music, the first day of Country Thunder on the main stage was over. Although I still hear the thumping bass drifting over from the Electric Thunder tent, so clearly, the party is still going strong – and will be for the next three days.