After Day Two's incredible happenings, it was hard to imagine that Day Three of Country Thunder could get any better. But by only 1 p.m., the day has already seen the penultimate of weddings: hillybilly, Country Thunder style.

After Day Two’s incredible happenings, it was hard to imagine that Day Three of Country Thunder could get any better. But by only 1 p.m., the day has already seen the penultimate of weddings: hillybilly, Country Thunder style.

The invitation read: "You are cordially invited to the biggest event in Country Thunder history – the union in holy matrimony of Mr. Billy Badass [and] Ms. Gognwow. Bring your red solo cup (BYOB) and a friend."

I mean, seriously, who could pass that up?

So we grabbed a golf cart and headed for the campgrounds. First, I have to say, the mud out there was beyond the mother of all mud – at least six inches thick, slimy, sloppy and very likely mixed with manure. Not exactly the scene you’d picture for much beyond … well, nothing.

We arrived at Team Ramrod’s campground and were mesmerized by the transformation of the campground into a wedding chapel. They’d erected a canopy, and someone had built a small chapel. Just really cool. The aisle was about 12-feet worth of Bud Light cases.

The couple was married by Red, a great friend and, by Friday via the internet, an ordained minister. There was a flower girl who tossed Bud Light bottle caps in lieu of flowers. The ring bearer transported a blow-up turtle with the rings attached to the top (I’m told Myrtle the Turtle was a long-time Country Thunder mascot).

The bride was walked down the aisle by a friend. Her dress was short and white. She, of course, wore cowboy boots. Her veil was adorned with Bud Light bottle caps and Bud Light cans. Her bouquet – complete with red, white and blue streamers – was a creative configuration of Bud Light cans. I mean, come on, how can you not love this couple? 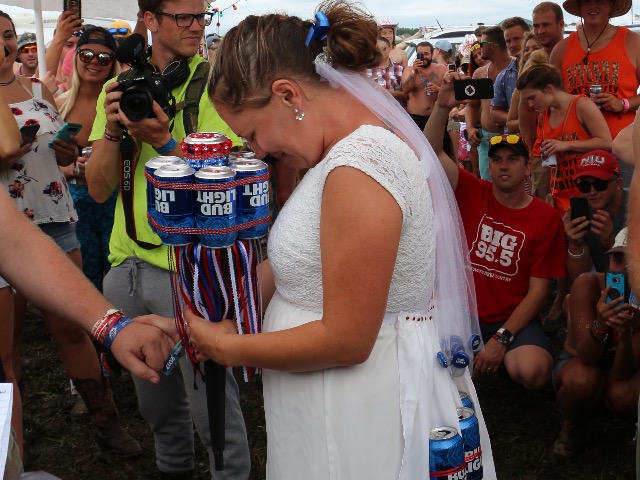 The bride and groom shared very … creative vows, which included the groom declaring that, prior to about a week ago, he didn’t know what a [expletive] vow was. He did, though, go on to swear to be the greatest man to the bride and her family, and that he’d be there through the best and scariest of times. There were, of course, appropriately off-color references about unmentionables.

The bride went on to say that her groom far surpassed any dreams she had of her man. Through tears she said, "I was sinking, and you kept me afloat and accepted me for the trashiest [expletive] that I am." After the requisite kiss of the bride, the groom threw her over his shoulder and carried her back down the aisle.

It was endearing in that way that you really don’t expect – being married among a family of strangers, in the mud, where they first met.

Country Thunder presented the couple with champagne, as well as a meet-and-greet with Thomas Rhett before his headlining show Saturday night. The bride screamed, and it was a little hard to tell in that moment whether she was excited to be newly married or to be meeting Thomas Rhett tonight.

The reception came later, after Rhett’s show. The invite requested you to bring your own hot dogs for "Hotdog Escapades" (*raises eyebrow*).

I think every couple hopes their wedding will be remembered for a long, long time. And for sure, this is one that every guest will remember for probably forever.

We are country. This is us. This is who we are – getting married with Garth Brooks’ "Friends in Low Places" playing in the background.