"Dancing with the Stars" recap: Halloween Night comes with a killer twist

Which survivors look secure coming out of Halloween Night and which ones should remain scared for the next week? The judges had their say, but here's our take on last night's spooky steps on "Dancing with the Stars."

"Dancing with the Stars" is not a show you think of when it comes to twists. Sure, it's always a surprise who gets eliminated each week, but just because you don't know how it's going to end doesn't make it a twist. That's like saying the final score of a World Series game is a twist ending.

But last night, fittingly on Halloween Night, "Dancing with the Stars" genuinely pulled off a pretty shocking twist, killing off not just one but two contestants at the end of the night.

I'll admit that I figured some kind of double elimination had to be in the show's future this season, since there's only three weeks left and there were still eight dancers left on the show at the beginning of the night. But I didn't think it was happening, like, NOW. Man, that gag about The Grim Reaper roaming the ballroom last night suddenly doesn't seem as amusing anymore.

The good news is that at least the two people axed were probably the most deserving of dancing doom: Nikki Bella and Vanessa Lachey. Bella's exist is a bit of a shame since last week was one of her stronger routines, but we're all out of bad dancers on the show now, and while she'd never been bad, she'd never been particularly noteworthy either. Her final dance – a spooky Starbucks-themed jive that I shall call a venti PS-hell – was her time in a nutshell: fun and sassy, but no where near the technical sharpness or bite of some other competitors.

Vanessa Lachey's exit was seemingly more surprising; after all, during the first few weeks, she was legitimately one of the front-runners. But over the past several episodes, while other contestants either noticeably improved – Drew Scott, Terrell Owens – or stepped up their already impressive skills – Jordan Fisher, Lindsey Stirling – Lachey had kind of plateaued. She always performed the hell out of her dances – take, for instance, last night's zombie routine – but the technical side was taking its toll, even last night with Bruno calling her a little out of control and "fuzzy" (and not in a Bruno leering way but in a Bruno didn't like your posture or footwork way). I guess we should've taken it as a sign when Death roamed past the judges' table after her dance.

Anyways, congrats Drew Lachey; you are still the reigning dance champ of the family. So you've got that going for you.

Oh, and in case there wasn't enough drama last night between surprise double eliminations, horror movie hoofing and the potential for a injury-related exit, there were also team dances: Team Monster Mash (Lindsey, Nikki, Jordan and Terrell) versus Team Phantom of the Ballroom (Frankie, Vanessa, Drew and Victoria). Monster Mash's corn maze number was the most compelling of the two, I found, but even so, it was also the sloppier of the dueling dances, over-choreographed and under-danced. Meanwhile, Phantom's true ballroom blitz seemed simpler in terms of concept but better assembled and danced overall. They won – but really, how much do the people at home care about the group dances? (cue the angry comments from viewers at home who LOVE the group dances; WHATEVER).

So which survivors look secure coming out of Halloween Night and which ones should remain scared for the next week? The judges had their say, but here's our take on last night's spooky steps. 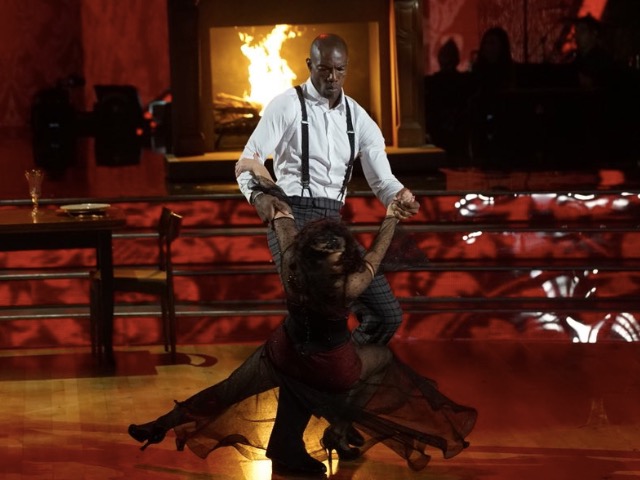 Our score: It shouldn't be surprising that an NFL star made it this deep into the competition, but remember the first few episodes of the season when Terrell looked terrible? IT SEEMS SO LONG AGO NOW!

Tonight's tango was admittedly not my favorite of the wide receiver's renaissance dances. The music, horror genre and tango dance style never quite melded together for me, and Carrie Ann smartly pointed out that he needs to continue his body's movement and flow through the moments in between moves – which is why he probably looks blasé sometimes. But he's already achieved a lot getting this far – and also apparently he has nerves of steel because he couldn't be scared by Sasha jumping at him in a mask. Bats, on the other hand? Bats spooked him. 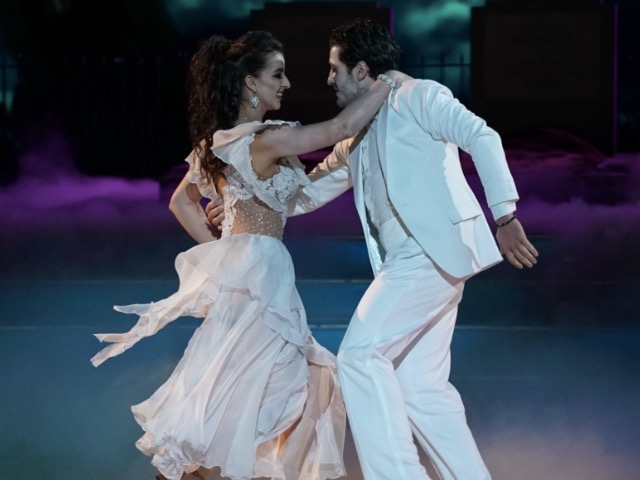 Our score: Arlen's Viennese waltz was admittedly an oddly low-key way to open up the dance floor on Halloween night. Minus the nifty ghost opening, it could've really fit any night of the season. I fear that, in a night packed with showy, overtly spooky and scary routines, its delicate delights could be overshadowed. But that doesn't make it any less lovely, hitting that nice rise and fall in flowing, floating fashion. It was a perfectly haunting routine that hopefully haunts viewers enough to remember to vote. 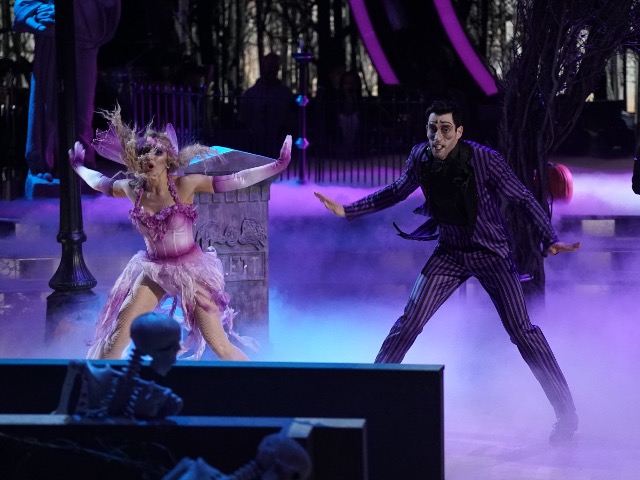 Our score: Speaking of dancers shockingly this deep into the competition: Drew Scott! And oddly enough, minus last week's overzealous action movie routine, he's earned it too. Take his kooky "Corpse Bride" routine Monday night, which was a lot of goofy fun – but also featured a lot of movement and dance content. However, he was synced up on almost all of it, and his lanky shape – once a hindrance – was actually perfect for a bony, graveyard Halloween dance. He even managed to turn a fall on the dance floor (ERIN ANDREWS, YOU SNITCH!) into something that looked like a part of the routine. That's a pro move right there!

Better yet for Drew Scott, he was in the bottom this week, which tends to be a rallying cry for voters the following week. I'd bet he survives thanks to that and his solid steps – even when battling a slick floor. 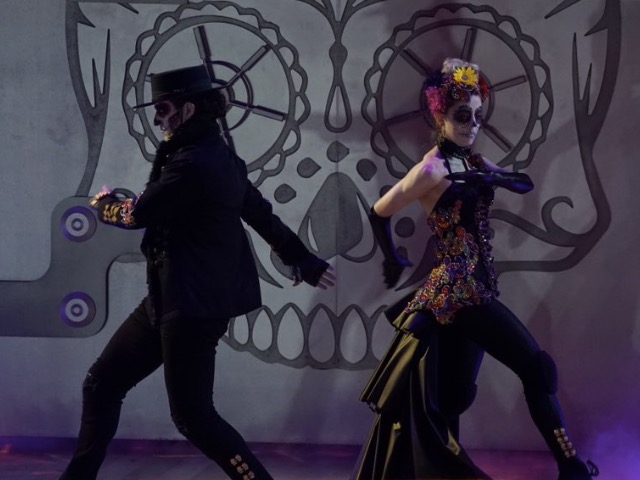 Our score: Poor, poor Lindsey Stirling. Apparently the violinist exploded her rib (or at least a possible separation) this past week – so much so she spent much of her preview clip in painful tears, going to the hospital for x-rays, while rumors flew around that she was going to possibly have to forfeit the competition. Thankfully for her competition and our entertainment, she managed to pull through and perform Monday night.

At least she didn't have an insanely intense dance style like ... oh crap, it's the paso doble. Nevermind.

She was clearly in pain after their Dia de los Muertos bank robbery routine, having to sit on Mark's knee as soon as the routine was over. Heck, she was clearly in pain during the dance, with her posture taking much of the brunt of the injury, looking a little hunched in places (as if you could blame her). But you'd have to be some kind of cold-hearted Halloween monster to not be impressed by her commitment to an extremely energetic and devilishly difficult dance – plus doing the group dance, where she actually popped the most of her team's performers.

Hopefully her rib situation heals soon, because losing her this season because of a random injury would be a true horror story. 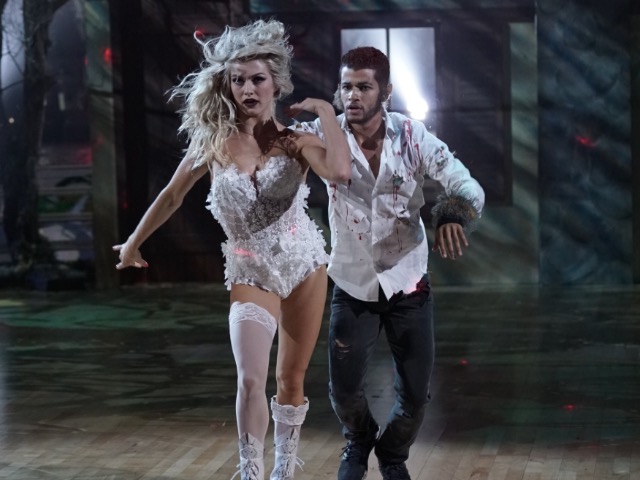 Our score: Hey, go figure, Jordan Fisher delivered a really, really, really exceptional dance routine. The guy is so incredibly the favorite at this point, it's not even funny – especially for the other dancers, because judging by some of their remarks, I think he's in their heads with how good he is. He is the Golden State Warriors of this competition, and last night's impressive horror movie paso doble did nothing to change that. It was sharp as hell, packed to the brim with content and really clever, mixing a song – Marin Garrix's "Animals" – that I wouldn't have thought of for a horror-themed dance with a spooky tone that totally worked.

If you're a betting person, and you haven't put your money down on Jordan Fisher at this point, you must really hate money or winning. 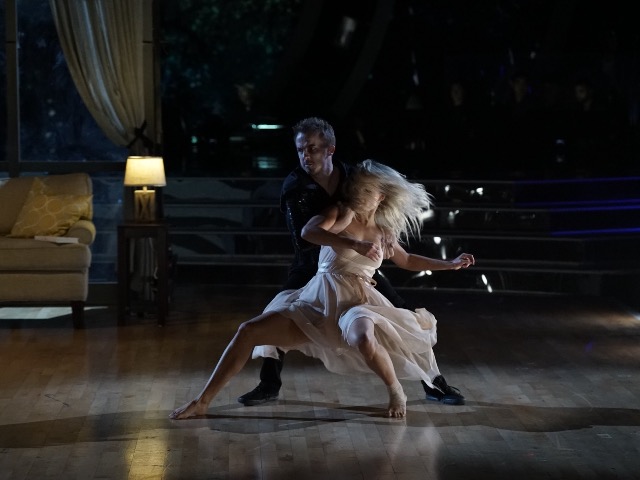 Our score: For a night dedicated to Halloween, Frankie Muniz's routine was the only one that legitimately sent shivers down my spine – partly because it was actually creepy, a perfectly synced-up home invasion stalker-inspired routine, and partly because the dancing was actually really great. It wasn't just great in comparison to last week's trolls routine – because clumsy bears on roller skates would be great in comparison to that dance. It was great because it was just some really terrific, terrifying storytelling – definitely scarier than Muniz's video game horror movie "Stay Alive" that I just remembered exists.

Also, Frankie seemed really into helping with the choreography this week. Maybe he's got a second career after this show!