If you're in need of some athletic competition to tide you over for during this sports dead zone, an unexpected savior has come to your aid: "Dancing with the Stars," which last night premiered its first-ever athletes only season.

We're running out of sports. Sure, the baseball season is still young, but the now Bucks-less NBA playoffs are drawing to a close, the hockey playoffs are wrapping up as well and football is still months away from playing actual games. The World Cup? We didn't even qualify!

Thankfully, if you're in need of some athletic competition to tide you over for during this sports dead zone, an unexpected savior has come to your aid: "Dancing with the Stars," which last night premiered its first-ever athletes only season.

It's actually pretty brilliant. Every season of "Dancing with the Stars," there's an athlete that shocks everyone away with how skilled and smooth they are on the dance floor. Never mind that it shouldn't have been a surprise – many sports require quick footwork, precise movement and memorizing plays like choreography – but it always was, enough so that many of these athletes made it to the final three or even further. (Shout out to former champ Donald Driver.) So why not, instead of the same old same old, pit all these surprisingly hot-stepping players against one another?

And ABC went all in with the theme for Monday's premiere night, snagging some big names (newly crowned Olympic royalty Adam Rippon and Mirai Nagasu, basketball great Kareem Abdul-Jabbar and ... infamous ice skater Tonya Harding!?) and featuring a big Jumbotron to show the scores, several sports-related dance numbers and the judges dressed like refs – or, in Bruno's case, an HR nightmare of a Foot Locker employee.

Unfortunately, while ABC swung for the fences with the theme, this sports-centric season is also more of a swinging bunt. There's only four episodes during this very truncated run, meaning the fun of watching the celebs evolve – as personalities and as dancers – across a full season won't be in the lineup. It also means we had to start making some cuts absurdly fast, dropping two athletes off the show before the end of the first night: Olympic snowboarding gold-medalist Jamie Anderson and two-time World Series winner Johnny Damon.

Thankfully, neither feel like much of a loss. Anderson was one of the worst dancers of the night, struggling from the start with the timing, footwork and general grace of her Viennese waltz. "Feeling Good," she was not, and her lone remarkable moment came in the middle of the routine when she gave a smiling chuckle that said, "Oh boy, am I over my head."

Meanwhile, Johnny Damon was ... fine. He reminded me a lot of Derek Fisher last season, which is to say that I totally forgot Derek Fisher was on "Dancing with the Stars" last season. He wasn't all that bad and had a spritely energy on the stage, but at the end of the night, the only thing I could remember about his foxtrot was that he was rocking a dadhawk hair style.

But how about the rest – including Milwaukee connections like Abdul-Jabbar and DSHA grad turned Notre Dame last-second hero Arike Ogunbowale? Here's our ranking of who was a slam dunk Monday night and who threw up an airball: 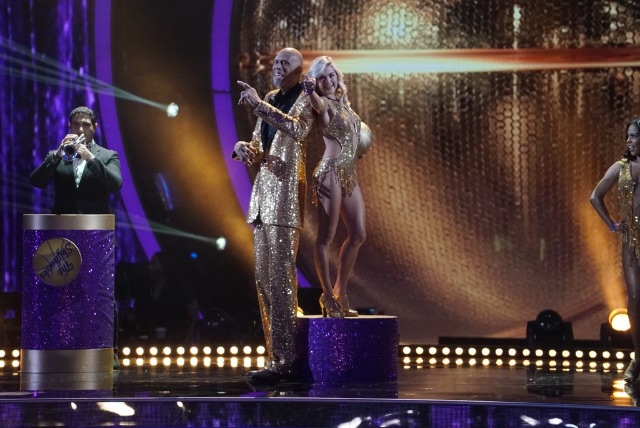 It only seems fair pro coach Lindsay Arnold would get a challenge this season after taking Broadway actor/Disney star Jordan Fisher to the championship – and Kareem definitely qualifies. He's not only the oldest contestant this micro-season, but he's also got more than seven feet of lanky former hoops great frame to coordinate into dancing shape.

And, well, his opening cha cha was as lanky and stiff as you'd expect from a 7'2" 71-year-old, filled with cautious arm and leg movement – and that's with an extremely generous routine that gave most of the actual steps to distracting backup dancers while Kareem just served as a maypole for them to shimmy around. It was quite the image, like if Slender Man got a Vegas residency show, but not much of a dance for the former Lakers great – AND BUCKS GREAT, ABC! Feel free to throw in some highlights from his Milwaukee days next episode, HMMM!? He only won a championship here too. 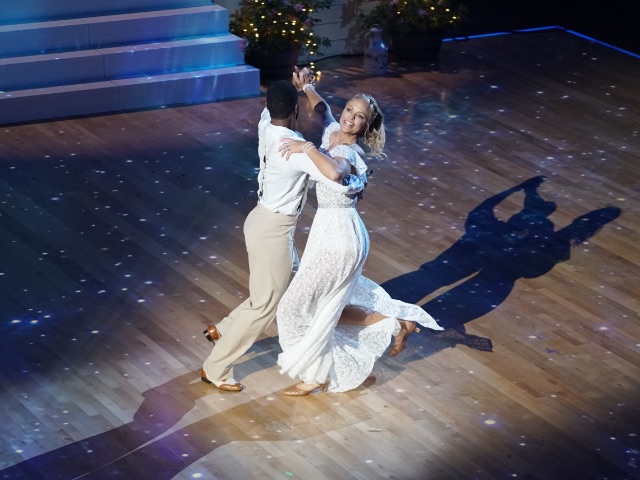 The judges were smitten by the retired softball icon, but I thought Finch-Daigle's foxtrot was an infield single at best. Her timing was clearly off in a few places, and her performance itself was awfully stiff, with a stapled-on rictus grin that screamed, "I am using ever bump and ridge in my brain to remember these steps." All that's to be expected, though, on the first night – and now that she's survived, hopefully she'll improve from here on out. And hopefully next time they'll perform a routine that doesn't roll a softball right into the middle of their path. I spent the whole dance horrified that somebody was going to roll an ankle. Most intense thing I've seen since "A Quiet Place." 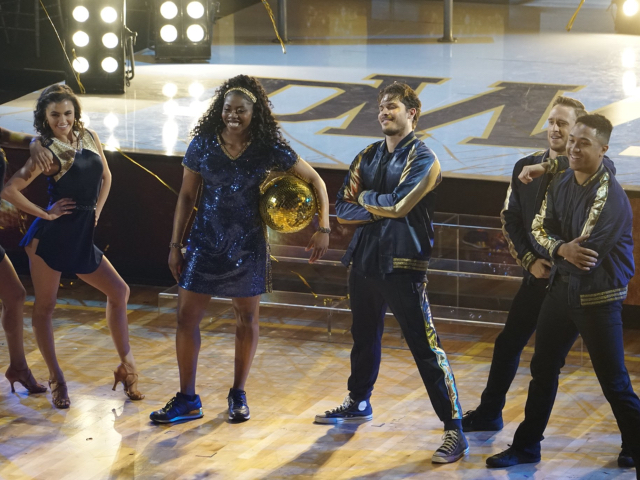 Apparently Arike's DWTS appearance is already a win, as she's helping reform the NCAA's ridiculous rules about collegiate athletes profiting off their image (because heaven forbid if these athletes got any bit of the billion dollar industry they serve).

As for her dancing, her salsa wasn't too bad either! Her posture may be hunched, but she has a groovy flow to her movement that the rest of her rigid competition would die for. I'd say that smooth musical looseness could translate into a long run, but since we've only got a few weeks, I'm concerned she won't have the time to translate and train it into ballroom success. Heck, I'm concerned she won't even have enough time to just get used to wearing heels. (Get ready for that in training clip next week, for sure.) 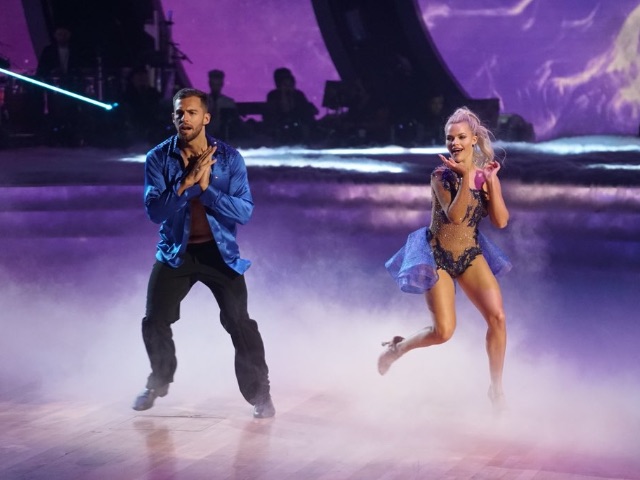 Being the first guy out of the gate is no easy feat – especially when it's also your first judged competition and your first job standing upright – but the first U.S. Olympic medalist in luge impressed with his show-starting salsa. Sure, it was a little stiff, but he looked comfortable smiling on the stage – and he's already got a solid toe point down pat! He could be a dark horse, though considering the big-name competitors around him, I'm not sure audiences will light up DWTS's phones for a luger. Or is it a lugist? Luge-an? Professional sledder? Who knows ... 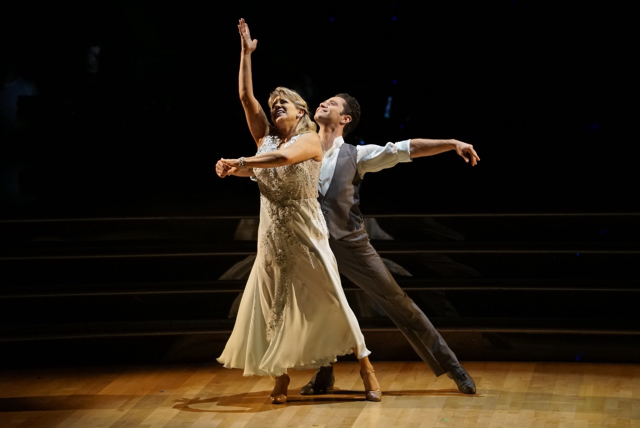 Here I was, all ready for a "Eeh, Tonya" joke – and then she had to go and do a startlingly really good job! Harding's the least of the three ice skaters in the competition – not all that surprising since she's the furthest away from her prime athletic days – but you can still see the training in her movement and especially her footwork. She's much more graceful than she gave herself credit for.

That being said, the controversial ice skater still ended up in the bottom three – probably because, well, she's Tonya Harding. While most of the contestants got a simple intro, "Dancing with the Stars" really tried to go hard with the emotions with her storyline this season, leaning into her ban from ice skating (without specifically mentioning what caused it) – and I'm not sure that's going to play well. As many people love her and want to see her redeemed, there are just as many who hate her and think she's a crook on stage. It'll be interesting to see if this short season gives Tonya enough time to warm people up to her. Her dancing, at least on night one, deserved some love.

Also: newly crowned Oscar winner Allison Janney from "I, Tonya" was there to cheer her on and hopefully not give her a pre-show pep talk in character. 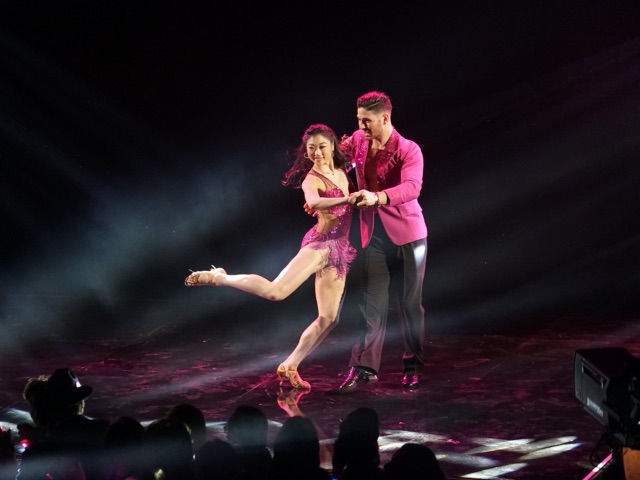 After a few solid if stiffly unspectacular routines, Olympic ice skater Mirai Nagasu showed up on screen and immediately kicked this athlete's edition of "Dancing with the Stars" in the rear (though hopefully not while wearing an ice skate). Her salsa came out confident and sassy, performing to the camera and immediately snapping your attention to the stage, as well as immediately taking her place among the season's favorites. As the judges notes, she was maybe a little over-aggressive but compared to the typical timid movements of the first night performances, Mirai and her partner Alan were a blast of icy fresh air. 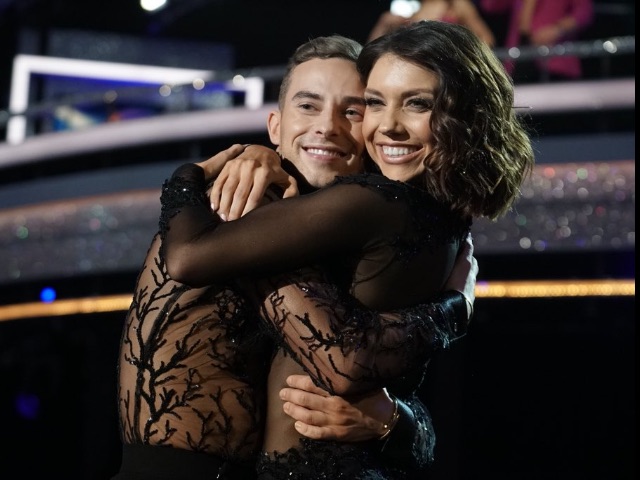 The PyeongChang Olympics may be long over, but Adam Rippon's attitude and diva-like awesomeness is still as alive as ever. Rippon was a delight, giving the "Dancing with the Stars" crew all sorts of delicious quotes for their pre-dance package – and that was before he took the stage with some giant glowing glittery angel wings projected behind him like some dance angel god, a description that fits him because his vogue-filled routine was sharp and sassy as hell. He put on a damn show. On a night filled with strong dances from ice skaters, Adam got to claim the title of the opening night crown from the bunch. 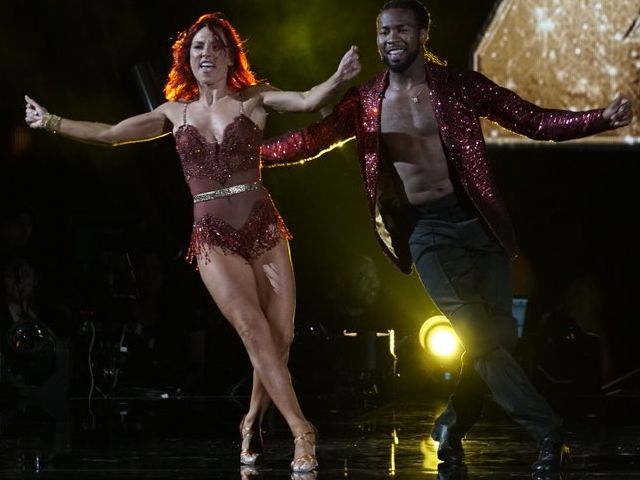 This may surprise you, but a football player came out on "Dancing with the Stars" and turned out to be a terrific dancer. I know! That NEVER happens!

Even if it's become the cliche at this point, the Washington cornerback's routine was no less uniquely thrilling and exciting to watch, coming out on stage with a silky smooth swagger all of his own as well as the quick, slick footwork to back it up. I was a little concerned for him being the last performance on a night with an immediate audience vote, but his cha cha was undeniable – and, thankfully, safe with ease. Could he win the mirror ball trophy? Absolutely. As for winning a date with Sharna? Well there's this season's real tension.