"Dancing with the Stars" recap: The 25th season starts with fireworks and fizzle

Monday night's premiere of "Dancing with the Stars" marked the reality competition show's 25th year of existence. But why did this quarter-century extravaganza feel so stripped down? Here are our thoughts on the show - and the dances!

Monday night's premiere of "Dancing with the Stars" marked the reality competition show's 25th year of existence. But why did this quarter-century extravaganza feel so stripped down?

Sure, there were some returning familiar faces – Cheryl Burke and Mark Ballas – but when it came to the judges table, there were only three seats instead of four, with Julianne Hough nowhere to be found. And three still ended up being too many, as only one expert got to speak after each dance thanks to the number of routines to cram into the night, leaving the other two awkwardly speeding through their thoughts before revealing their scores.

Add in the fact that each dance felt like it was maybe just 30 seconds long, and it was kind of hard to make any snap judgments for the rest of the season based on last night's premiere.

That being said, let's make some snap judgments for the rest of the season based on last night's premiere! Whose footwork launched early fireworks, and whose feet fizzled out on the first day? The judges had their say; here's our scores. 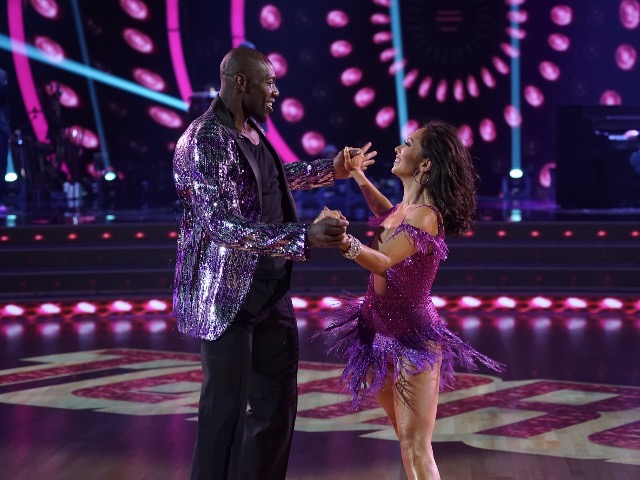 Our score: How did it take this long to get T.O. onto "Dancing with the Stars"? The former wide receiver great (as well as great ego) seems like an obviously fit for the show ... except when it comes to the dancing part, as Monday night proved.

For the first one out of the gate, he looked pretty smooth at least, but the judges dinged his footwork pretty hard, and he looked hunchy for much of the dance, thanks to the size difference between him and returning longtime partner Cheryl Burke. Football players usually go for long runs on DWTS – after all, one won the whole damn thing last year. But if T.O.'s first dance was any sign, he's more likely to celebrating touchdowns than weeks survived this season – especially after a lackluster performance with minimal storyline at the very beginning of a LONG premiere episode.

Also: CAN SOMEBODY CONFIRM WHAT A HEEL LEAD IS AND IF IT'S GOOD THING OR NOT? 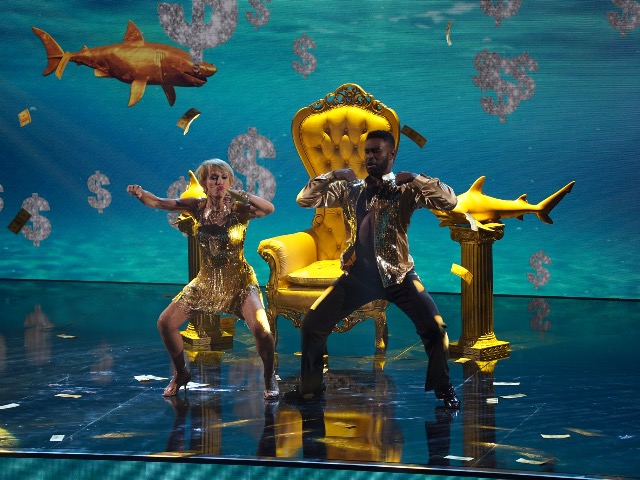 Our score: I would not have expected a judge from "Shark Tank" to be one of my favorite personalities from "Dancing with the Stars," but Barbara Corcoran was a hoot whether she was proudly cougar-ing all over her partner Keo Motsepe – complete with grabbing onto his inner thigh for dear life during the judges' assessment; someone call HR! – or yelling, "Who is this guy?!" at Bruno, a fair reaction.

Now if only we could do something about her dancing, as her routine – set to Ludacris' "Money Maker" – was stiff and ditzy on the moves, not that there was much movement during the dance to begin with. Being fun can buy her a week or two on the show; she'll need the footwork to go any further. 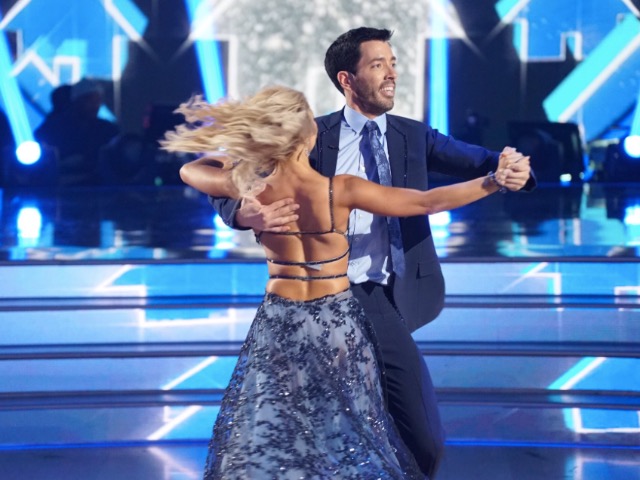 Our score: How did we only get one of the "Property Brothers" on the show? We've already got a husband and wife fight; we might as well have gotten some sibling rivalry, too. I blame you for this, Jonathan. You owe me a house.

Anyways, Drew gets Emma Slater, defending champ, as his partner, and she gets a renovated house if they win. She probably shouldn't plan on those home improvements anytime soon, though, judging by his week one dance moves. The HGTV star started with some sugary vim and vigor ... and then the dancing began (to "Our House," natch) and MY LAWD THE FOOTWORK. Len called him a "fixer upper," so I guess Drew Scott's karate training wasn't as helpful as he hoped.

He should survive this week, but I wouldn't plan much further beyond that – unless Jonathan's the twin with the dancing talent, and the two can work out some "Parent Trap"-esque swapping. 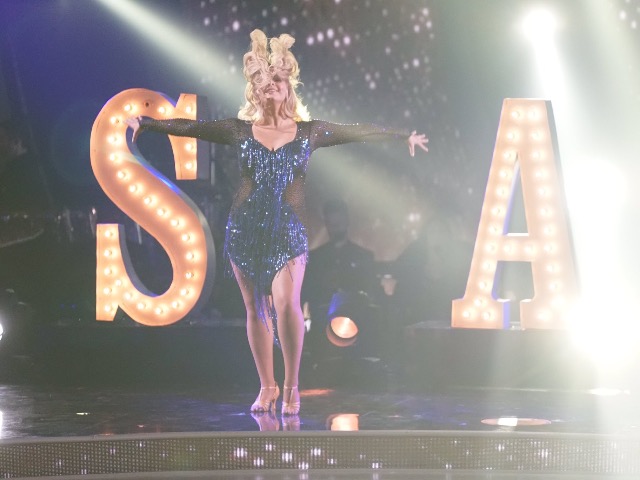 Our score: The judges were fairly high on the Pieterse's debut dance – complete with a "Chicago"-esque name in lights – but I was less than impressed, especially in the beginning of the routine when the actress's timing was clearly off and took a while to lock back in. That being said, though, she has a fun personality – when her mind isn't stuck on remembering the dance moves – and you get the feeling she could be good eventually. Just not tonight, where there was little pretty about the "Pretty Little Liars" routine. 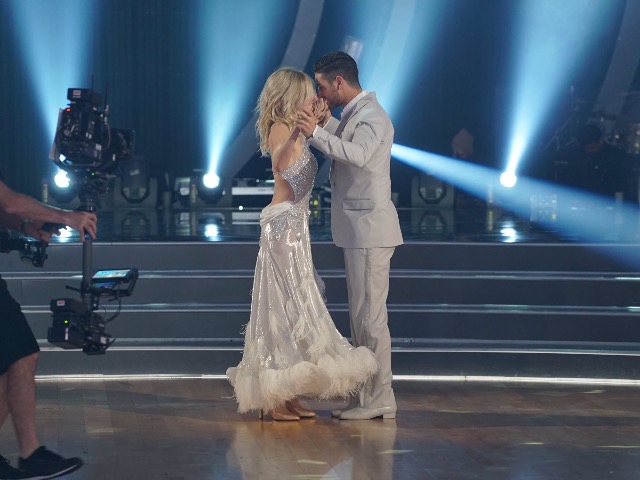 Our score: Congrats to Alan Bersten, who graduated from Maks' understudy to full-on professional partner this season, and congrats to former pop star Debbie Gibson (NOT Debbie Allen, Bruno; you have ONE job) who looked pretty good in her first foxtrot. Bruno noted her arms and frame, and maybe she was a touch clompy sometimes, but overall, it was a really sweet, smooth and elegant dance routine. Plus, she's one of the few celebs who got a storyline in last night's speeding show, as she copes with muscle pain related to Lyme disease – or Lyme's disease, according to Erin Andrews. Wouldn't be "Dancing with the Stars" without at least five awkward Erin Andrews flubs! 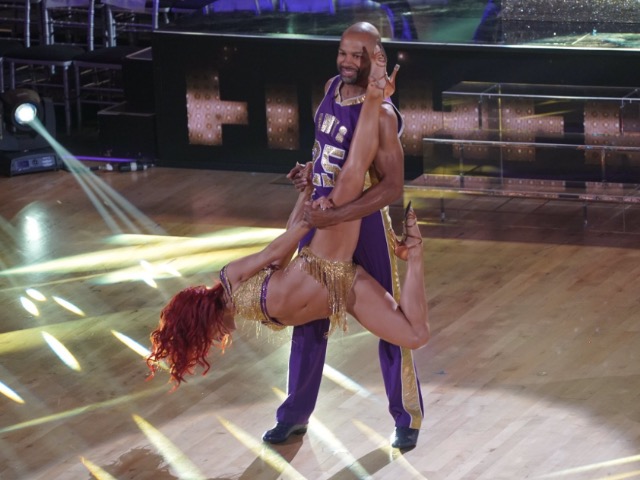 Our score: Points added for the former Los Angeles Lakers player's delightful mom, who was VERY EXCITED about her son performing on her favorite show. Points, however, then subtracted for those lame pants. He reminded me of my dad playing basketball in those sweatpants. Not great. Luckily, his dance was better than his drawers, putting in a solid routine – with an impressive amount of lifts for the first dance of the season. Bruno wants snakier hips and a closer eye on technique, though, so improve that, Derek. And your slacks. 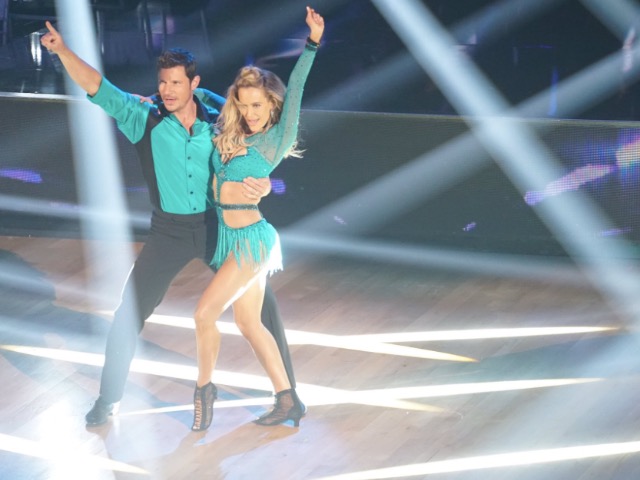 Our score: Oh boy, does "Dancing with the Stars" love this storyline. In a night that barely had time for the judges or storylines or even the dances, we spent a whole lot of time on Nick and Vanessa Lachey – whether it was their marriage rivalry, that their pro partners – Maks and Peta – are also married, that a Lachey already has a mirror ball trophy thanks to season two winner Drew or that Nick had previously told a TV reporter that he would never do "Dancing with the Stars" (OK, that was funny). And yet no time dedicated to discussing that MASSIVE PLATTER OF DOUGHNUTS the Lacheys apparently feed their kids!?

Thankfully for "Dancing with the Stars," Lachey's dance moves were decent enough to keep him and this storyline around for a few more weeks. His feet looked a little flat – almost as much as his face, smiling through remembering the choreography – but Lachey managed to overcome that and his teal bowling team shirt to deliver a competent routine. And on opening night, competence is good enough – especially for the guy from the "non-dancing boy band," 98 Degrees (LOL).

Only question: Len, what does it mean to be "soft and mweep-mweep"? 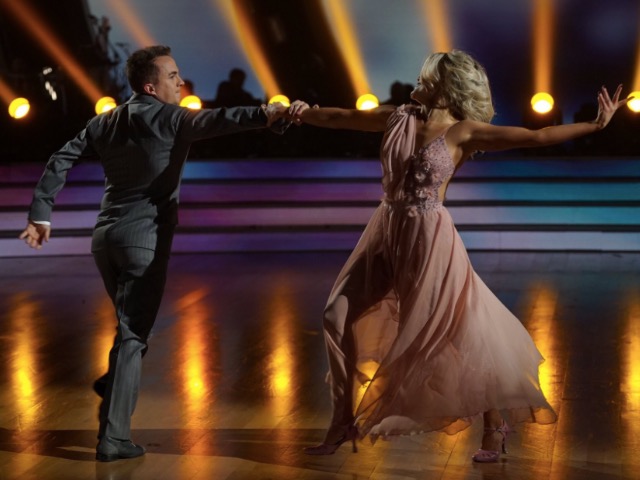 Our score: Maybe it's just because I grew up watching "Malcolm in the Middle," but I was thoroughly charmed by Frankie Muniz's "Dancing with the Stars" debut. He had a low-key really good storyline – he broke his back as a professional race car driver (sad), and if you call him Malcolm on the street, he'll respond (somehow sadder) – and, even more so, he was just so gosh darn happy to be there! The routine lacked finesse, with stiff arms, some clompy feet and a lacking emotional connection with his partner, but Muniz was just so eager and sweet that I – and the judges – couldn't help but like it. Mission accomplished, Cody Banks. 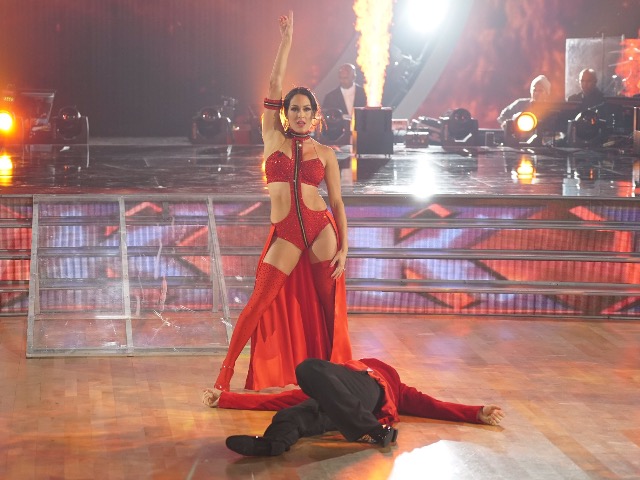 Our score: It shouldn't be that surprising that a wrestling star would be good at choreography, but I was still shocked by how solid the wrestling diva queen (and John Cena's fiancee) performed on the first night, dishing out a feisty and sharp tango. Now if she can just stop looking down at her feet during the dance – and stop body-slamming her poor pro partner Artem into every floor they walk on – she should last a while. 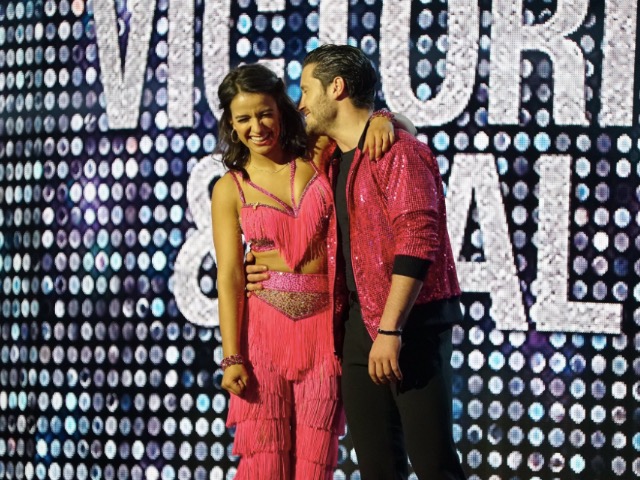 Our score: Well, I guess we know who wins the best storyline of the season. So ESPN sports reporter and former paralympian Victoria Arlen can't feel her legs – but that's an improvement considering she spent a decade of her life paralyzed due to a rare combination of diseases. The fact that she's dancing, period, is enough of an accomplishment. That her routine was genuinely a delight, flashing a beaming smile before the number that lasted the whole dance, is really just a wonderful bonus. With an incredible storyline, smart choreography and impressive dance moves – for someone who, reminder, CAN'T FEEL HER LEGS – Arlen could go a long way this season. And who'd root against her? 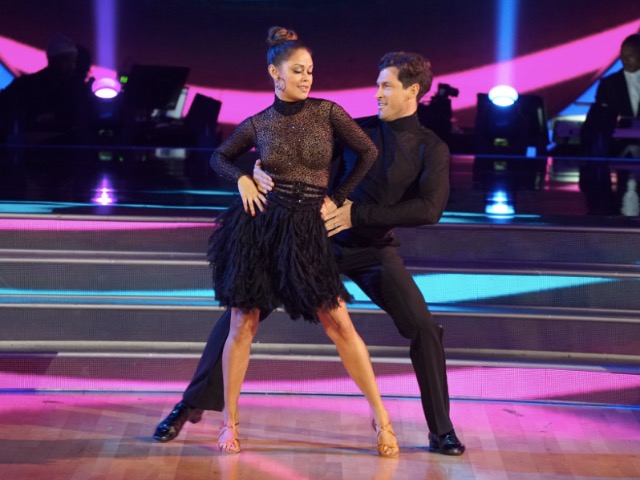 Our score: Of the two dancing Lacheys this season racing for the mirror ball, Vanessa is definitely the horse to bet on. Her goofball personality – mixed with Maks' deadpan, silly intensity – is already a hoot, while her routine (complete with stroller steps and Babybjorn choreography) was a lot of saucy, slinky fun as well. Between the storyline that ABC clearly loves, her bubbly personality and her efficient footwork, this Lachey has the ability to go all the way. 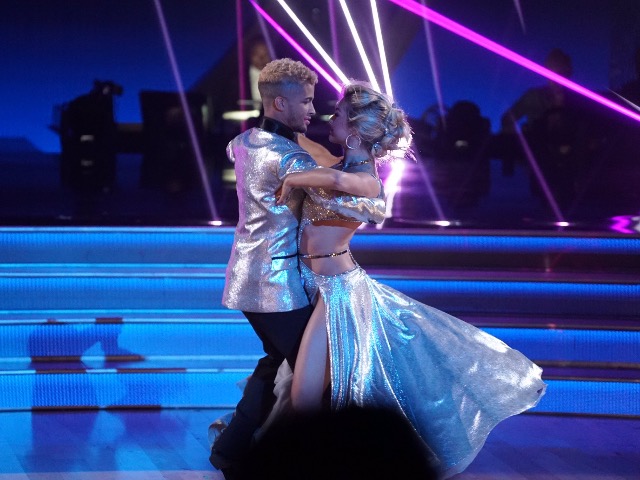 Our score: Indeed, who would've expected the pop star and Broadway performer to have a decent grasp on dancing? Indeed, a very excitable Jordan Fisher (his storyline was basically "HE'S JUST SO HAPPY TO BE HERE!") teamed up with last season's pro partner runner-up Lindsay Arnold for a very impressive week one tango, one that showed off what Arnold can do as a partner when she's not having to choreograph shtick for an aging baseball dad.

But will people vote for him considering he's one of the lesser known names? And considering his on-stage experience? He might not win – there's always one shockingly early exit each season – but he should be around a while. So get excited, Jordan – or even more excited, if that's even possible. 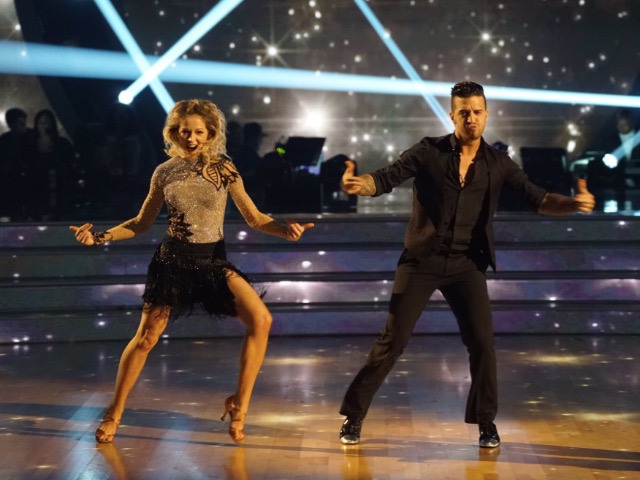 Our score: So things didn't look great for the final dance of the night when electric violin master Lindsay Stirling described her legs as "noodly" in her pre-recorded package and then almost tripped over some stairs. GRACEFUL START. GOOD START. But then the musician busted out the cha cha and ... it was stupid good – not only because of the sharp footwork but because of the personality radiating off the routine. She even pulled out a wink and a tongue at the camera! You can't mug for the cameras, Lindsey; that's what the pros do!

The only thing working against her is that the routine came at the very end of the show when people might be tuning out. But other than that, Stirling ended the show with a bang – and I'm not talking about the fireworks.