A winter weekend in Door County through a native's eyes

On the first of the year, I went home to Door County, where I was once a local. You never know how visiting is going to go come winter, but if you know what to do, Door County is still pretty special come the dead of winter.

On the first of the year, I went home to Door County, where I was once a local. I’m slowly coming to grips with returning home a tourist, at turns painfully resigned to my outsider status, at others relishing the chance to experience the peninsula the way so many visitors do each year.

It hurt to give up my local status when I moved to Chicago four years ago, crossing the bridge that connects the peninsula so tenuously to the rest of the world. Now, I’m just a native my friends revel in calling a FIB.

I returned with my wife, a full-blooded Chicagoan, to spend a couple days relaxing and a couple working, hoping she’d find the desolate days of January refreshing rather than depressing. You never know how that’s going to go come winter in Door County.

Fortunately, she found it the former. We’re lucky. My parents live on a small stamp of land a couple miles from a small bed and breakfast-style inn they run in Egg Harbor. The Bay Point Inn is perched on the bluff overlooking the bay, and come the offseason, there are plenty of open nights for us.

I grew up cleaning rooms here, wondering why so many city folks from Madison, Chicago and Milwaukee made the trek to this small town, where it seemed there was so little to do for a kid – no movie theater, fast food, mall or arcades. But now I get it. Now I’m city folk, and easing into Egg Harbor without a streetlight, a sound or another passing car pulls the strain from my shoulders.

Even when most of the stores are closed and a couple of bars open in the evenings, the sun still sets gorgeously over the bay, and when we step into our room, we stare at a sunset view that may be the best on the peninsula. It’s good to be home and even better to share it with someone new. 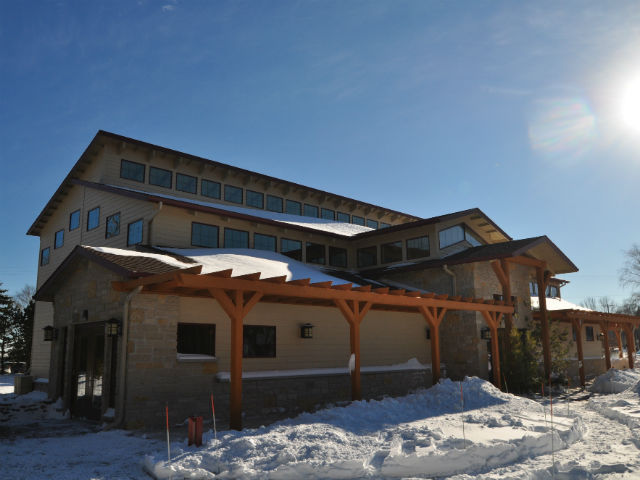 Here’s a little secret about Door County: Winter can be great here. The restaurants are getting better, the trails are improving, and the bars are as warm as ever. We head straight to Sister Bay to meet old friends at CHOP, Patsy and Jody Woulet’s steak and seafood hotspot that expanded to make room for growing demand this year. You won’t find a better steak in Northern Door than this one, but what I love are the familiar faces.

Most of the staff followed Patsy and Jody from the now-closed Mission Grille; others migrated from much-acclaimed Inn at Kristofer’s after its respected owners Chris and Terry Milligan sold the restaurant three years ago. In short, the place is well-stocked with friendly local servers representing some of the best on the peninsula. I know now how great it is to see those familiar faces, the way tourists used to see me when I was slinging beers and burgers from behind the bar at Husby’s and the Sister Bay Bowl. Once you leave, you realize how rare that familiarity and comfort level is.

Speaking of Husby’s, we can’t hit Sister Bay without stopping in. In another life, my brother and I owned this bar, Sister Bay’s mainstay since Emma Husby started slinging with a scowl 80 years ago. Thirteen years since I last poured Yukon Jack for the locals here, it still feels familiar, even if much has changed. It’s the best place to watch a game in Northern Door, and the food is better than when I was here, but it remains Northern Door’s living room.

A day in the snow

The next morning, we head out early to take advantage of the fresh blanket of snow that came a day earlier.

We head to The Ridges Sanctuary, a place I haven’t really explored since I was in high school. Five years ago, I took a brief tour of the the grounds with director Steve Leonard as he outlined his vision for a new, multi-million dollar LEED Platinum welcome center for the state’s oldest private nature preserve. The economy had just collapsed, and Leonard’s vision seemed a pipe dream, but he was undeterred. He envisioned a center that served as a gateway to the dunes formed thousands of years ago as the lake waters receded.

Five years later, the gleaming new center is open in the heart of Baileys Harbor, shepherding nature lovers into some of the most beautiful trails you’ll ever hike. Kate Leroy sets us up with a couple of $5 snowshoe rentals, and we spend a couple hours traversing the boardwalks, bridges and icy shoreline of Lake Michigan.

I wonder how I failed to do this more often when this was my backyard. 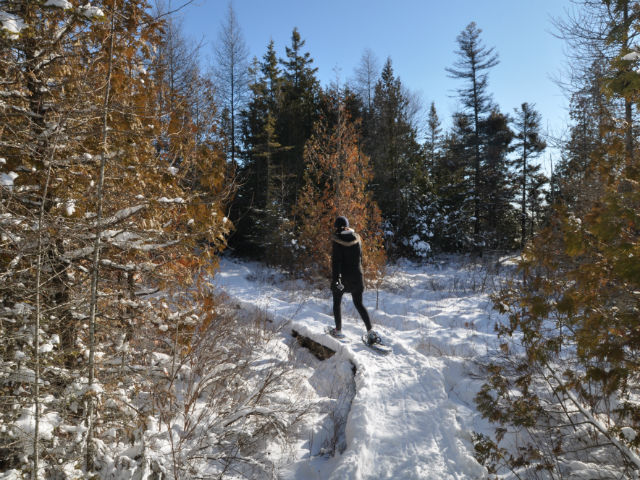 Next up is a stop at Czarnuszka Soup Bar, Paul Wanish’s closet of a joint in Ephraim that offers Door County’s best lunch deal. For a few bucks, you get a stomach full of one of four-to-six soups made fresh daily, and the always-interesting, sometimes perplexing conversation with Wanish is a free bonus.

My wife loves a challenge, so she jumps at the chance for another outdoor adventure in the afternoon. My friend Brian Fitzgerald, organizer of the Door County Half Marathon and a handful of other events on the peninsula, has been harping on me to try out fat tire biking for a few years now, and a recent gift of a bike from Broken Spoke has me chomping to try it. We rent Anne a bike from Nor Door Sport & Cyclery, which now carries several fat tire options, and for $15, she’s set for a couple hours chewing up roads of snow and ice in Peninsula State Park.

We start nervously, unsure how to handle the ice on the roads or the chill biting our faces, but about a half mile into pedaling, we’re warming up and finding our balance. The tires devour snowpack grooves from truck tires, and even small climbs push our lungs. 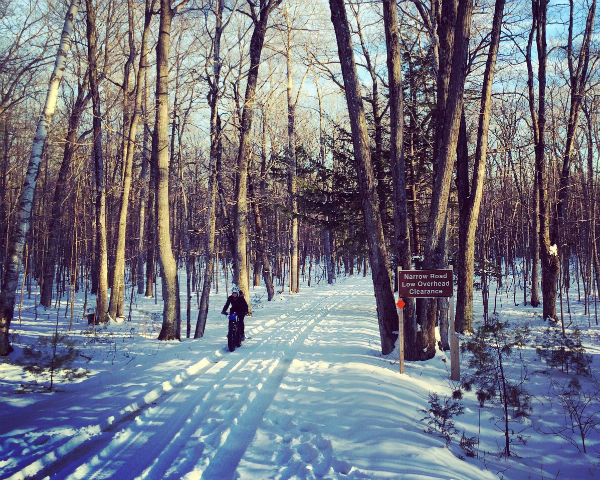 Brian’s lungs are limitless, and he decides Sven’s Bluff is worth a try. Anne charges up the long, incline that demoralizes so many Door County Half Marathon runners each May, and at the top, we find our reward: a bay doused in the orange glow of the now setting sun.

Our work deserves reward, so after careening back down Sven’s gripping tight, we refuel with a couple beers and curds at Bayside Tavern.

I was once assured of knowing every server and customer in the place. Not so anymore, which is hopefully a sign of maturity, but I miss that too. The MacDonalds’ are all still here, however, and that feels familiar. The beer and curds disappear fast, and we’d be happy to hang at the Inn for the rest of the night if we hadn’t already made dinner plans.

When you’re from a small town, you know everyone, and when you return, you try to squeeze in time with as many as possible. This was easier when we were all 23, and a stop at Husby’s was likely to cover all your bases. Now in my late 30s, I need to make plans, and we squeeze a crew together for dinner at Mr. Helsinki’s, an underrated option and one of the few restaurants here that offers a hint of an urban vibe. Cyndal Mueller, who I remember from her days as a hard-nosed high school athlete, is doing her usual stellar work on the grill for a full house on a Saturday night.

Recovering with coffee, browsing, and the Pack

We kick Sunday off with my parents for lunch at the Blue Horse Bistro, where the coffee is hot and the food as good as you’ll find at any coffee-house kitchen around. Owners Eric Rasmusson and Carina Helm have been at it for 15 years, now on their third (and surely last) location with a spectacular perch across from the town beach. You’ll almost always find one of them here – Eric in the kitchen, Carrina at the counter. Usually both.

I’m proud every time I stop in and see the place packed, knowing how hard restaurant life is here, how they’ve persevered and how much it means to the town that Blue Horse is one of the few businesses that sticks it out each winter – no easy commitment when one looks down the empty streets of Fish Creek in January, February and March.

Many shops are closed now, but a couple favorites are always open. We browse Ecology Sports in Sister Bay, soon to move to a new location in the center of the village, and I grab a deal on a jacket at On Deck, where owner Mitch Larson is always open for business, his family lineage embedded in generations of the soil here.

We wrap up in plenty of time to watch the Packers game at a friends house. The Packers fall to the Vikings in frustrating fashion, but it’s good to watch the game on home soil nonetheless, and even my Bears fan wife withholds from reveling in our loss.

The beaches are awash in ice, the food options are a fraction of what they are in July, and if you bowled down the the center of the road in Fish Creek, what little traffic there is would politely swerve around you. But if you know what to do, Door County is still pretty special come the dead of winter.