On Nov. 10, 1975 the Edmund Fitzgerald went down in the big lake Gitche Gumee

On this day, November 10, 1975, the EDMUND FITZGERALD was lost. Probably the most famous Great Lakes wreck, the FITZGERALD, when polling audiences on known shipwrecks, is always in the top two with the TITANIC.

The group – headquarted at Milwaukee Public Library, which I featured in this story a few years back – is very active in terms of collecting and archiving documents and photos and objects and also hosts numerous events each year.

The newsletter is an easy way to find cool old photos in your inbox every week (sometimes more). And, because these folks are history buffs like the rest of us, there's always a story behind the photos and the WMHS folks share that story. This one was written by John Buellesbach of MKE Marine Reports (mkemarinerpt‌@‌gmail‌.com).

This is a story that's part of the nation's consciousness thanks in large part to a six-and-a-half-minute unlikely hit song by Canadian singer Gordon Lightfoot, "The Wreck of the Edmund Fitzgerald

Probably the most famous Great Lakes wreck, the FITZGERALD, when polling audiences on known shipwrecks, is always in the top two with the TITANIC. 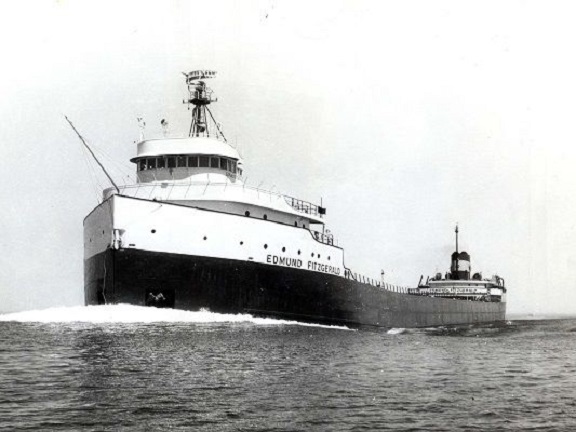 The keel of hull 301 was laid on August 7, 1957 at River Rouge, Michigan, by the Great Lakes Engineering Works.  The FITZGERALD was launched June 7, 1958 with much celebration. She was delivered to the Northwestern Mutual Life Insurance Company in September and went under charter to the Columbia Transportation.

The FITZ was named for the Chairman of the Board and former President of the Northwestern Mutual Life Insurance Company located in Milwaukee.   Edmund Fitzgerald was also a founding member of the Wisconsin Marine Historical Society (1959) and served as the Society’s first president.

In 1960 the employees of Northwestern Mutual presented Edmund Fitzgerald a model of his namesake to celebrate his 65th birthday.   That model was later donated to the Wisconsin Marine Historical Society and is displayed in the Humanities Room of the Central Library, 814 West Wisconsin Avenue.

The FITZ disappeared shortly after 7:10 pm on November 10th taking her crew of 29.  Her wreck was discovered the next year in Canadian waters, 530 feet deep and about 17 miles from Whitefish Bay, Michigan.

On Nov. 2, 1905, the wooden steamer Appomattox stranded off Atwater Beach