On this day, Nov. 23, 1912, the 44-year-old schooner ROUSE SIMMONS, also known as the Christmas Tree Ship, foundered in Lake Michigan near Two Rivers, with all on board. A piece of it lives on right here in Milwaukee.

Fans of Milwaukee – and Great Lakes – history who haven't signed up for the Wisconsin Marine Historical Society's mailing list are missing out. To join the list, send an email to wmhs59@gmail.com.

The group – headquartered at Milwaukee Public Library, which I featured in this story a few years back – is very active in terms of collecting and archiving documents and photos and objects and also hosts numerous events each year.

The newsletter is an easy way to find a cool old photo in your inbox every week (sometimes more). And, because these folks are history buffs like the rest of us, there's always a story behind the photo and the WMHS folks share that story. Today's story was written by Suzette Lopez.

Here is today's story from the Wisconsin Marine Historical Society:

On this day, Nov. 23, 1912, the 44-year-old schooner ROUSE SIMMONS, also known as the Christmas Tree Ship, foundered in Lake Michigan near Two Rivers, Wisconsin, with all on board.

Kenosha lumberman R. B Towslee built the SIMMONS in Milwaukee in 1868.  She was named in honor of the man who helped arrange for its financing.

From 1873 to 1890, the SIMMONS served as a member of Charles Hackley’s fleet.  Hackley was one of the wealthiest lumbermen in the Midwest at the time.  By 1893, the SIMMONS had outlived Wisconsin’s lumber heyday and had turned to a new service designated as utilitarian transport schooner or “hooker”.

By this time brothers August and Herman Schuenemann were seeking new ventures and entered the newly popular Christmas tree market.  Usually on their last trip of the season, they would load up at Thompson, Michigan, with evergreen trees too small for lumber.  The last trip was always dangerous due to the weather.  November storms are known for their fury. 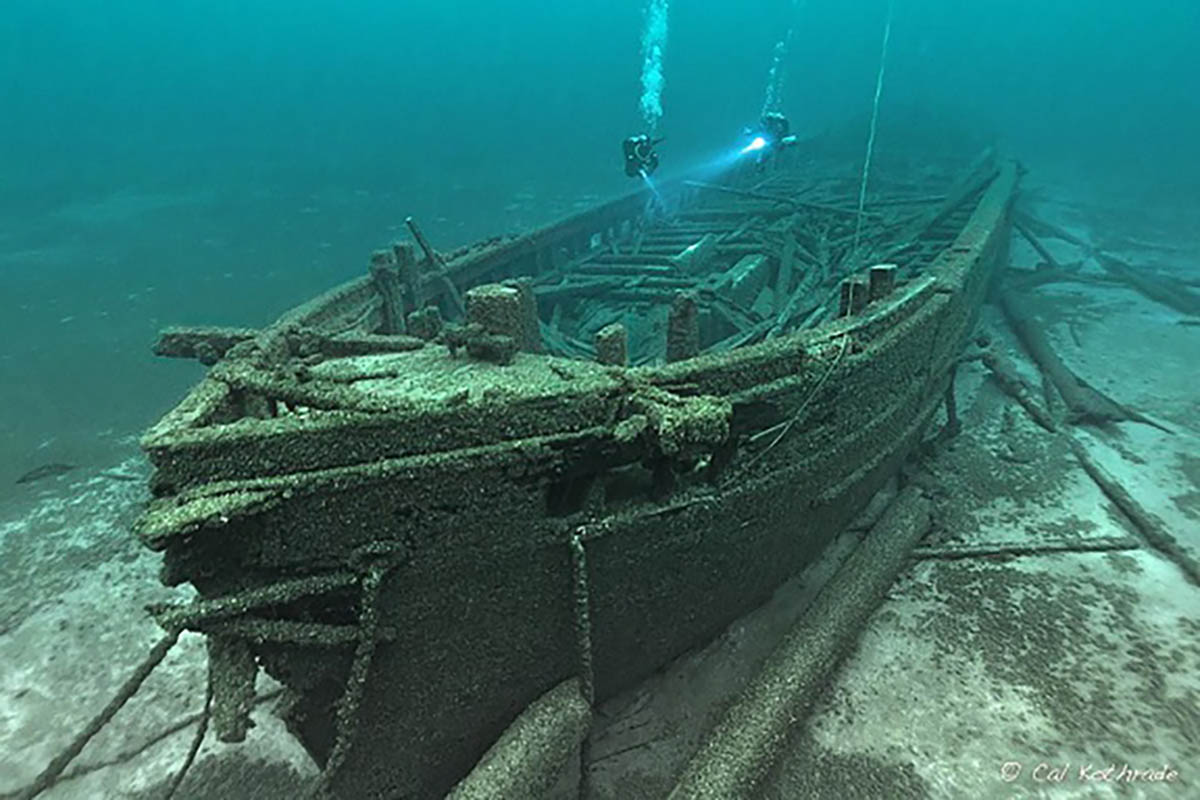 August Schuenemann was lost with his schooner S. THAL and crew on Nov. 10, 1898, off Glencoe, laden with Christmas trees for Chicago.

Herman Schuenemann was lost with his schooner the ROUSE SIMMONS and crew on Nov. 23, 1912, laden with Christmas trees for Chicago.  Theory here is the storm coated the deck load with rain and snow, then froze.  Unable to cut the deck load free, the weight just eventually carried her down.

The SIMMONS was discovered in 170 feet of water by Milwaukee diver G. Kent Bellrichard in 1973.  Her Christmas trees had been tangled in fishermen nets for years.  This finally led to her discovery.

Today, the SIMMONS anchor is prominently located at the entrance to the Milwaukee Yacht Club.

On Nov. 10, 1975 the Edmund Fitzgerald went down in the big lake Gitche Gumee

On Nov. 2, 1905, the wooden steamer Appomattox stranded off Atwater Beach