The story of Kendra Scott could just as easily be titled: "Wisconsin Girl Makes Good." After all, this trend-setting jewelry mogul has made a name for herself and her brand, not only for the company's wares, but also for its philanthropic ideals.

Welcome to the series "First to Wisconsin" featuring stories about businesses that we finally have in our state. Although there may be more locations to come, these premiere places are celebrated by OnMilwaukee and the Corners of Brookfield, a luxury shopping mall inviting guests to "Shop. Dine. Live. Be Entertained."

There’s no mistaking a gift from Kendra Scott. Packaged in the jewelry brand’s signature yellow box, the designer wares have become a hot – and eminently recognizable – commodity across the U.S.

The affordable statement jewelry (most pieces are under $100) has been sported by red carpet celebrities and showcased on the runway by designers including Oscar de la Renta and Randolph Duke. And the full collection has recently become more readily accessible to Milwaukeeans, thanks to Kendra Scott’s first Wisconsin retail location, which opened at the Corners of Brookfield in April.

The stores, which were designed by their namesake and company owner Kendra Scott, are designed to remove the intimidation factor from jewelry shopping. Built to emulate her home, Scott envisioned a place where jewelry could be not only viewed but tried on, and where women could gather with friends and take part in custom jewelry design. 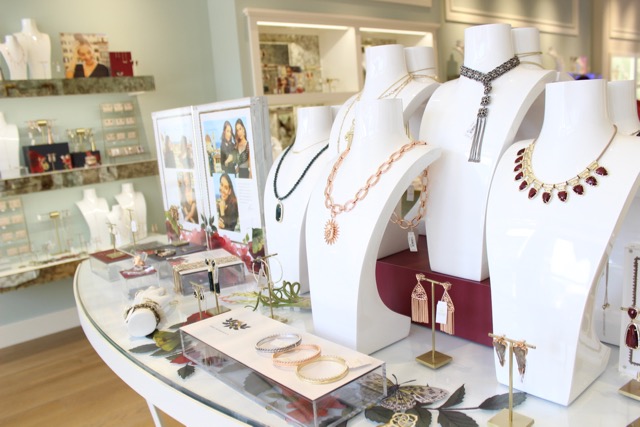 Amid all the attention, what some might not know is that the popular accessories retailer can trace its beginnings to Kenosha, Wisconsin where Scott grew up.

During her childhood, Scott’s aunt, Jo Ann Anen, was fashion director for the now shuttered Gimbels department stores in Milwaukee. She made frequent trips to Paris and Milan for fashion shows and shared her adventures with her niece. The experiences inspired Scott to dream of one day becoming a designer herself.

Scott started her first business designing hats at the age of 19 following a family move to Texas. While living there, her step-father was diagnosed with brain cancer, and Scott’s business, The Hat Box, was inspired by the chemotherapy patients she met while her stepfather was fighting his cancer.

After five years of unsuccessfully trying to make her hat business work, Scott decided to take her inspiration in another direction: jewelry. She started her business in 2002 with $500. She began selling her handmade pieces door to door, eventually moving into the wholesale business. She opened her first stand-alone retail store in Austin in 2010. Since then, Scott has built a multi-million-and-growing jewelry company which is forecasted to open its 74th store by the end of the year, according to Oger.

"That was a big dream for a Kenosha girl," remarks Megan Ogar, community relations and events manager for Kendra Scott Brookfield. "And it’s inspiring to be able to share her story, particularly with little girls. It’s a tale that reminds all of us that big dreams are attainable."

And her Wisconsin roots have not been forgotten by the jewelry mogul, who shared her story this spring with NPR.

The color-infused Kendra Scott Jewelry line is built on the use of natural gemstones including chalcedony, kyocera opal and turquoise magnesite, which are are set in brass plated with 14-karat gold or rhodium in finishes including rose gold and gunmetal.

Kendra Scott signature pieces – which include favorites like the Danielle oval pendant, the Rayne and the Elisa (pictured below) – are complemented by new seasonal collections designed by Scott, who notes that she takes inspiration from the world around her.

This fall’s collection was inspired by designer Scott’s travels to Italy, and features pieces like these crushed gold mica earrings which were designed to emulate the look of coins tossed into the fountains of Rome. 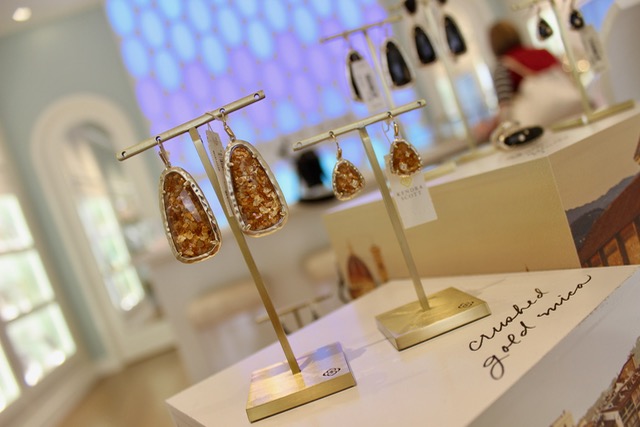 In addition to jewelry, over the past year, the brand has also released two new lines: a home goods line, featuring trays, boxes and picture frames, and a collection of nail lacquers in shades that mimic the colors featured in Kendra Scott pieces. 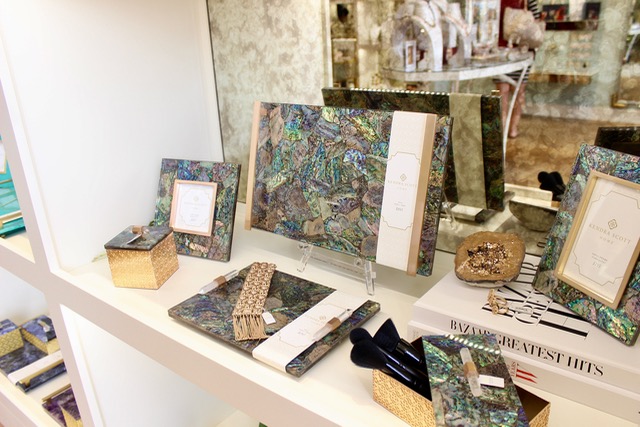 Each store also features a "Color Bar," a plush gathering place where women can choose from a variety of components to create their own customized Kendra Scott jewelry.

"If you can envision it, but can’t find it in the store, you can make it here," says Oger, who notes that custom jewelry is a popular option for men looking to give a uniquely thoughtful gift to their significant others. 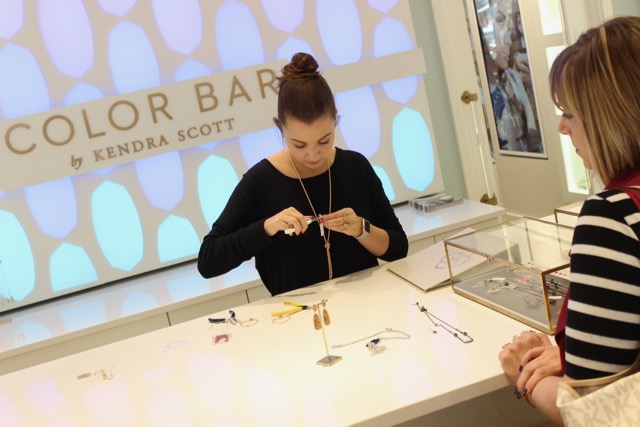 A company with a soul

But Kendra Scott is not only widely known as a trend-setting jewelry company. It has also made a name for itself for a commitment to supporting causes, both locally and nationally. It was a core value Scott instilled in the business, largely inspired by three words her step-father said to her while on his deathbed: "You do good."

The mission has meaning for Kendra Scott supporters, as well as employees. In fact, it’s a major reason Oger was attracted to the business.

"My background is in nonprofits," she says, "so the emphasis on philanthropy really appealed to me. I applied for a job on a whim … and it was that commitment to giving back and being so community oriented that really sealed the deal for me."

Oger says that it’s the Kendra Scott motto "What matters to you matters to us," that drives the activity in each stores, all of which take a uniquely local tact with their community outreach.

"Our team wears Packers gear on Sundays," she says, "and we partner with a variety of local groups and organizations. This month, we donated 20 percent of sales to organizations that promote childhood cancer awareness, including the Ronald McDonald House, the MAC fund, Children’s Hospital and the Make a Wish Foundation. Corners of Brookfield is matching our giving up to $1,000."

She says the store also runs unique Wisconsin promotions, including the newest offering: a Green Bay Packers Color Bar Party promotion during which women who book a party for five or more on a Packers game Sunday will receive a free piece of green or gold jewelry.