If you've never had the pleasure of setting foot into one of the 89 Shake Shack locations across the U.S., you'll have your chance soon enough. The popular fast casual restaurant will open its first Wisconsin location in Milwaukee's Third Ward before the end of the year.

Welcome to the series "First to Wisconsin" featuring stories about businesses that we finally have in our state. Although there may be more locations to come, these premiere places are celebrated by OnMilwaukee and the Corners of Brookfield, a luxury shopping mall inviting guests to "Shop. Dine. Live. Be Entertained."

If you’ve never had the pleasure of setting foot into one of the 89 Shake Shack locations across the U.S., you’ll have your chance soon enough. The popular fast casual restaurant will open its first Wisconsin location at 220 E. Buffalo St. in Milwaukee’s Third Ward before the end of the year.

And when it does, you’ll have access to its signature ShackBurgers made with hormone- and antibiotic-free Angus beef and served up on pillow soft potato rolls (or gluten-free buns, if you please). There are also flat-top hot dogs (split and cooked until crisp), custom made Shake Shack chicken, apple and sage sausages, crinkle cut fries, excellent shakes and unique concrete mixers made with frozen custard. 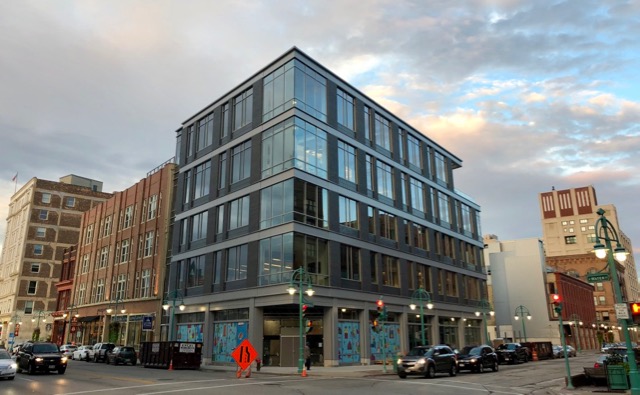 Yes and no. To really get to the bottom of what makes Shake Shack a gem of a fast-casual spot, you’ve got to start with its history. And then you’ve got to consider a few unique elements that the Milwaukee location will offer.

One of the things that makes Shake Shack what it is is that it has its roots firmly planted in the world of fine dining. The concept was founded by RestaurateurDanny Meyer of Union Square Hospitality Group in New York, a 28-time James Beard Award winner is best known for restaurants like Gramercy Tavern, Daily Provisions and Greenriver. He’s also the author of "Setting the Table: The Transforming Power of Hospitality," a tome which belies his expertise in creating amazing customer experiences.

Despite its record-breaking growth – fueled largely by social media – Shake Shack sprung from humble beginnings. It began as a hot dog cart established by Meyer’s Director of Operations, Randy Garutti. But, the cart was special. The food was prepared in the kitchen of the nearby Eleven Madison restaurant; and the cart maintained the same quality standards at the restaurant. The cart’s motivations were also different; during its inaugural run, 100 percent of the proceeds from the hot dog cart went to support the Madison Square Park Conservancy’s first art installation.

Fans lined up at the cart daily for three summers straight. At that point, the city began fielding proposals for a 400 square foot permanent kiosk in the park. And that was when Meyer sat down and scribbled his vision for a modern roadside burger stand on a restaurant napkin. And by 2004, the Shake Shack brand was born. Not 15 years later, Shake Shack boasts 143 locations internationally with 89 in the U.S. and six in the Midwest (likely to be 10 by mid-2018). 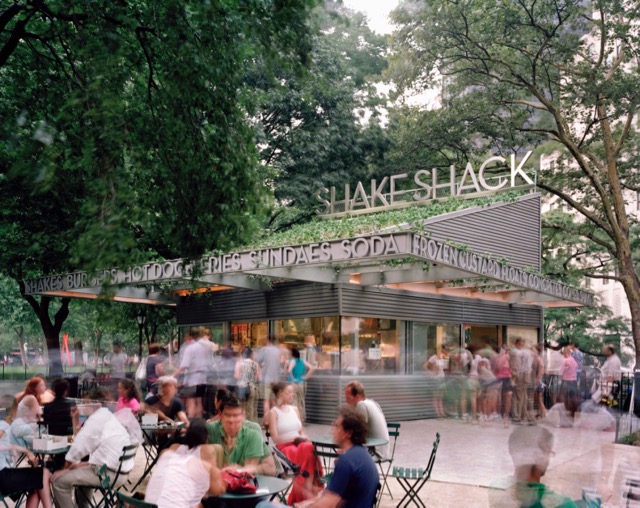 "The biggest differentiator for us is really where we grew up," notes COO Zach Koff. "We were derived from a fine dining restaurant company. Our first meals were created in one of the finest kitchens in New York. And I often look at it this way: the Shack turned out great because we had some of the finest parents out there."

Despite incredible growth, Shake Shack’s roots haven’t been lost in the shuffle. The restaurants might serve up burgers, but they are also equipped with everything that’s great about fine dining from a congenial dining experience to great beer and wine. And Meyer still has his hands in the pot, according to Koff.

"He’s chairman of the board and he’s very active," he says. "He has a huge say in how we continue to make the experience better… to make the food better. He has his fingers on the pulse, and we always reach to his perspective."

Koff says part of what has made Shake Shack such a successful brand is that it wasn’t created to be duplicated.

"It was designed to be one awesome burger stand meant to be in that one place, specifically," he explains. "It took us five years to put a second location on the Upper West Side. There was a little bit of a lump in the throat and a lot of anxiety about taking something away from that first location, But, as we moved forward, that location developed its own character and design. And both locations began to really take off." 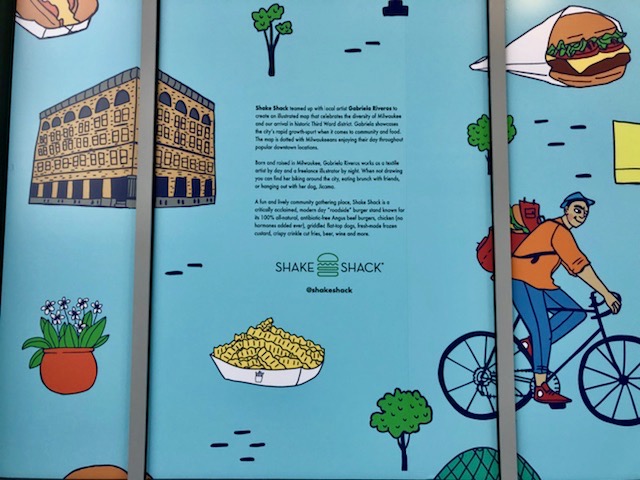 What to expect in Milwaukee

Plans haven’t been completely finalized for the Milwaukee location. However, Koff says that – like every other Shake Shack – the Third Ward location will possess its own distinct style and offerings, reflecting both local culture and flavor.

"We work so hard to take extra time and care to ensure that the Shake Shack that opens up in Milwaukee is unique enough that you wouldn’t really feel like it existed anywhere else. Not only does each location have its own design – they are invented to be of the place," says Koff.

"And the menus are also pretty unique. Every location works with local artisan bakers. There’s local beer, sometimes local wine. And every location has a unique frozen custard menu with flavors tailored to the area. One of the things we’re excited about is that people in Milwaukee already understand the frozen custard concept," he adds with a laugh. 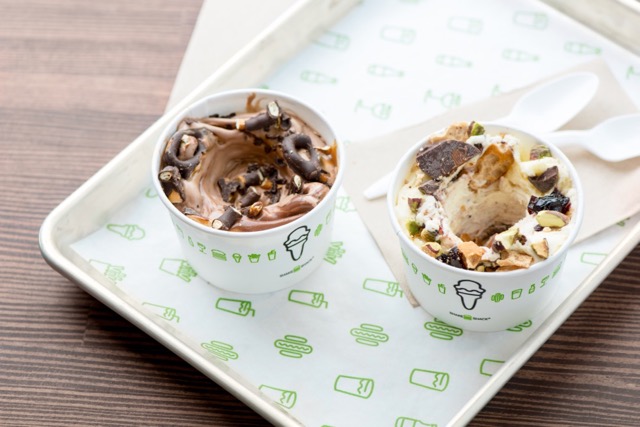 Interestingly, Koff notes that a Milwaukee-made product has already been a long-time part of the Shake Shack brand.

"Ever since the beginning, we’ve been using Usinger’s for our chicken sausage." he says. "And we’ve been working with them for over a decade to really improve that recipe. For the most part anytime we’ve had any special sausage events, we’ve typically worked with them to come up with the sausage."

Koff says that community service and giving back is also part of the mission for the company, and that plays out locally in each of its locations. Every Shack has a concrete comprised of vanilla custard with a flavored mix-in, usually a pie that’s made by a local vendor, and 5 percent of the proceeds from that item go to a local charity.

"Every company needs to think of what it is that drives their decisions, and for us it’s our mission," explains Koff. "It came out of who we are and where we got started, but it’s become a calibrating moment for us. We ask ourselves: Is this decision good for us? Good for our customers? Good for our suppliers? Good for our stakeholders? We’re always pushing with the ingredients that we use. And when we design our Shacks, we work to bring in the integral pieces of the local community, whether it’s on the walls or in the design of the tables. And that feels good to us."

Collaboration with local chefs has also been part of the Shake Shack model, whether it’s through a burger special or dessert inspired by a local culinarian.

"We’ve always held on pretty deeply to the fine dining chef-driven attitude and the camaraderie of those chefs," he says. "Our culinary director and his team are so good at spotting and finding the up-and-comers and hometown heroes, and I know our culinary director Mark Rosati has already been in touch with a number of cool chefs from the Milwaukee area." 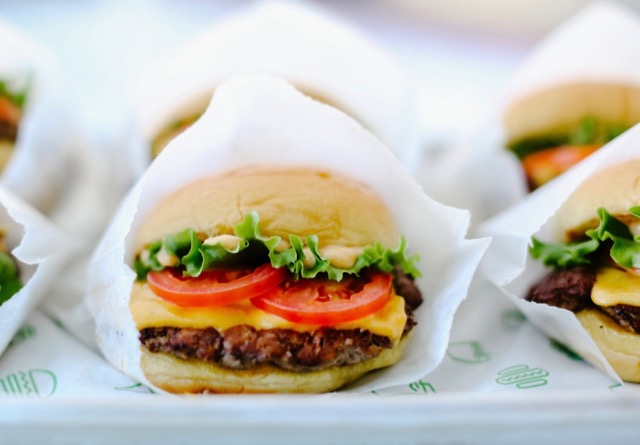 Is there really a secret menu at Shake Shack?

Just for fun, we also asked Koff if there is really a "secret menu" at Shake Shack. He laughed.

"The things that have been thrown around are things like an amazing BLT that we make," he says. "And then there are things like the grilled cheese sandwich, which is now actually part of our regular menu. We make beer floats. And the one that keeps coming up is a peanut butter bacon burger that was the offset of a really funny experiment that’s just sort of lived on in the Shake Shack lexicon."