Heidi White, who is the bar manager at The Standard, wasn't stoked to do this interview, but her boss, Steve Gilbertson, made her. "He said, `stop being a f*cking Sally and do the interview already,'" says White. "So let's do this."

Heidi White, who is the bar manager at The Standard, wasn’t stoked to do this interview, but her boss, Steve Gilbertson, made her.

"He said, ‘stop being a f*cking Sally and do the interview already,’" says White. "So let’s do this."

OnMilwaukee: how long have you been in the service industry and where did you get your start?

Heidi White: I’ve been in service for 10 years. I got started at Cans as a cook, then security, cocktail waitressing and finally, bartending.

How long have you worked at The Standard?

I started about two months after they opened, so I’ve been here about five years. I became the bar manager a year ago.

I love the people. The stories. The different types of conversations. The atmosphere. The free thinking.

This bar is my family. Also, you can be a stranger off the street and anyone you sit next to you’ll be able to strike up a conversation with them. I describe this place as "mom’s apple pie" – once you meet us, you'll become a family member for life.

Is The Standard a Packers bar?

It’s not a "sports bar," but we get into Packers games. We have crazy good deals during games and I’ve been known to order pizza from Ian’s and sometimes bring Jell-o shots. It’s a great bar to spend less and get a good buzz on during the game.

Are you into crafting cocktails?

Nope. Beer and whiskey for me. I’m not saying I never would get into craft cocktails because I love learning new things – I’ve learned so much about beer from Steve (Gilbertson) – but it’s currently not my scene.

Do you want to own a bar someday? 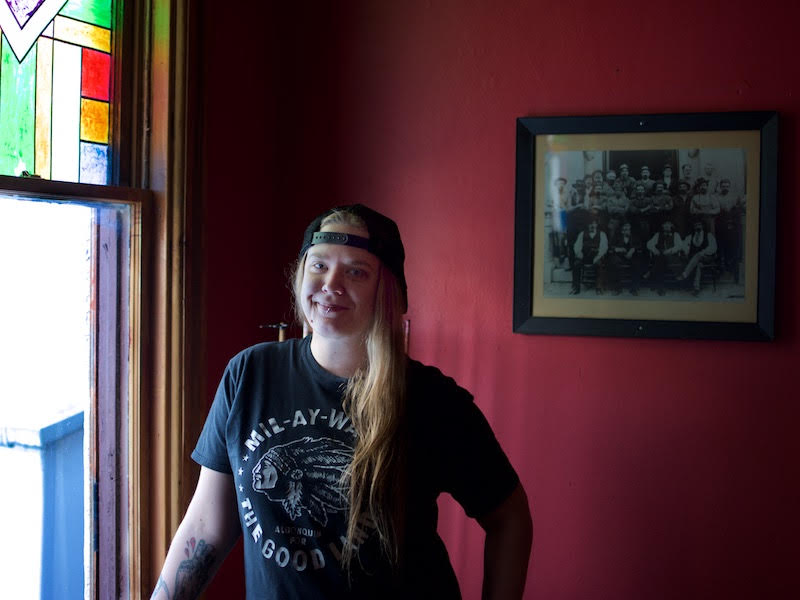 How do you cut people off who’ve drank too much?

It all depends on the person, the situation, the mood. Usually, I’ll just lean across the bar and say, "it’s time to go" and ask if they need me to call a cab. If it gets more aggressive, I’ll have my door guy handle it – that’s what they're there for. It’s cool if they can hang out and slam some water, but eventually they gotta go.

Where did you grow up and where do you live now?

I grew up in Glendale and I live in Riverwest. I’ve lived on the same block for 10 years.

If you could travel anywhere in the world, where would you go?

Ever since high school, I wanted to go to Thailand and Cambodia. One day I will go. I only take one vacation a year, but I go to Florida every year with my family for 2 1/2 weeks. My parents have a timeshare in Kissimmee and I’ve been going there since I was like five. It’s my second home.

So when you’re not bartending, what do you like to do?

Spend time with family. My family means everything to me.

What’s so cool about your family?

My mom was a hippie and my dad was a greaser – they have great stories. My mom is someone you can never get angry with and my dad is the best dude I know. They’re f*cking awesome.