The lock up: 3 steps for securing your bike and foiling thieves

The strongest protection you have against bike theft is the perceived difficulty of what it would take to actually acquire your bike. Every lock can be cut, but in a row of bikes, you want to make sure yours looks the most annoying to acquire.

It's July, which means bike theft season is in full swing. TMJ4 recently ran a story about a bike thief who approached the porch of Julianna Daulman and simply picked up her bike and rode off with it.

Sadly, this is not atypical.

"This time of year I see at least one person a day that had their bike stolen in Milwaukee," said Carolyn Weber, co-owner of Coast in Bikes. (Full disclosure: I also moonlight as a bike mechanic at Coast in Bikes).

A lock may have helped prevent this crime of opportunity, but it's not just about your choice of security, it's also about the lock up method as well. The strongest protection you have against bike theft is the perceived difficulty of what it would take to actually acquire your bike. Every lock can be cut, but in a row of bikes, you want to make sure yours looks the most annoying to acquire.

There are many locks to choose from that range in price, size, style and weight, but I recommend these three:

Never use cable locks. These are sometimes cheaper than the locks listed above, and they are lightweight and compact, but they are easy to cut, even with the smallest of cable cutters. "Often when we get people at the shop saying their bikes were stolen almost every time it's because they were using a cable lock," said Weber. 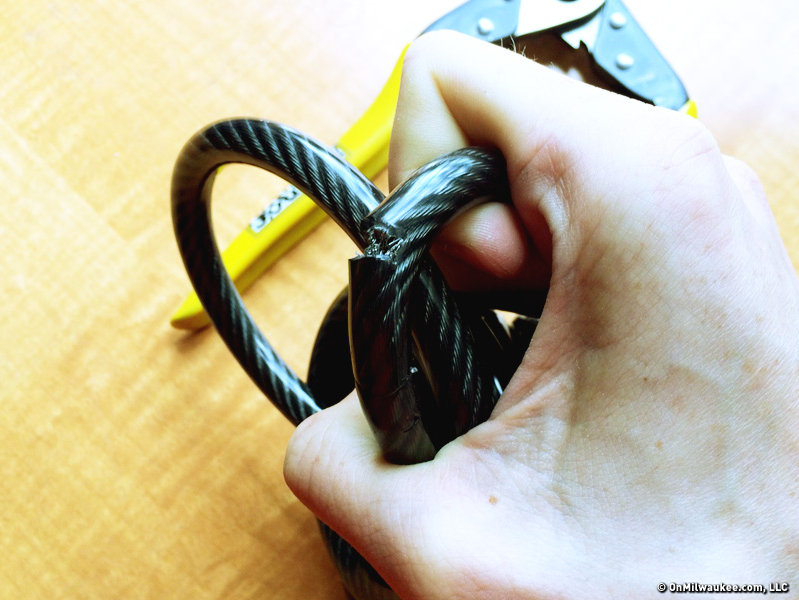 When you buy a lock, avoid spending as little as possible and consider that it will probably outlast your bike. Bikes come and go, but locks usually remain with their original owners.

Step 2: Lock up your bike

This is the most important step. Even more important than actually buying the lock. I'm going to say it again. Lock up your bike. Seriously, you'd be surprised at how many people don't do this step. Even if you're "just running in for a second," lock it up. Even in a crowded area where surely anyone would notice a thief, lock it up. Even when it's six degrees in the middle of winter, thieves will take your bike (I've seen it happen).

Adrian Baquero of Erik's Bike and Board told me, "A lot of people lose their bikes by not locking them up."

Step 3: Make sure whatever you locked to is sturdy

Do not lock to a chain link fence. And Derrick Henry of Cory the Bike Fixer added that "most of the stolen bikes we hear about were locked to wooden fence posts or porches."

Similarly, do not lock to small trees (yeah, I know, it's weird! People have actually cut down trees to steal bikes!).

Henry also mentioned sucker poles. "Those are the signs that can be pulled out of the ground". If you're locking to a light post or a street sign, give it a shake to make sure it's secure.

So here is one last tip: Always lock up your bike.

Bicycles are hot; here's where to buy 'em in Milwaukee

The Riverwest 24 returns with a new route, more class(es)