Featured bartender: Kelsey Cano from Who's On Third

Shortly after arriving from Chicago, Kelsey Cano got a job at Who's On Third and has been pouring libations and connecting with people ever since. Recently, we stopped by to talk to Cano about whiskey, eye injuries, getting hit on, having a Sept. 11 birthday and more.

Kelsey Cano moved to Milwaukee just over a year ago from Chicago. It was during a transitional time in her life – she was between careers and not sure if she wanted to return to school – and her mother was already living here.

"One day I just thought, ‘f-ck it, I’m moving to Wisconsin," says Cano.

Shortly after arriving, Cano got a job at Who’s On Third, 1007 N. Old World Third St., and has been pouring libations and connecting with customers ever since. Bartending is a natural fit for Cano who is mentally and physically quick, fun to talk to and upbeat yet real in personality.

Recently, we stopped by Who’s on Third to talk with Cano about whiskey, eye injuries, getting hit on, having a Sept. 11 birthday and more.

OnMilwaukee: What are some of the high points of growing up in Chicago?

Kelsey Cano: I lived in the city but eventually we moved to the suburbs. I still spent a lot of time in the city because I was comfortable there. After high school, I went to Illinois Tech for two years, but dropped out. I continued to live in the dorms for a few months after I dropped out because I wasn’t ready to move home yet.

Then I went to beauty school – Paul Michell’s – in Chicago. I had always wanted to do hair, it was a huge passion of mine. When I got out of school a year later, I found a job right away in a "blow dry bar" where I’d wash and style people’s hair. However, the combination of the blow drying, the hair spray and my contact lenses was not a good one, and I wound up with cornea lesions on my eyes and had to wear those wrap-around glasses and go on medical leave. After that, I moved to Wisconsin.

I liked it since the moment I walked in here. After I moved I was wandering around Downtown, just walking into places to feel them out, and when I came in here I saw all the Jameson bottles on the wall and everyone was super friendly and everything looked really good on the food menu so I thought, "Yeah, I could work here." I wound up being hired on the spot.

What’s your favorite item on Who’s On Third’s menu?

I have to mention the wings. The are so, so good and are 50 cents each on Thursdays.

I like talking to people and getting to know them. When I'm working, I feel like I'm being paid to hang out with my friends. Also, I have such a great team of coworkers here. I would be nothing without them. I love this bar and I don't plan on leaving anytime soon. 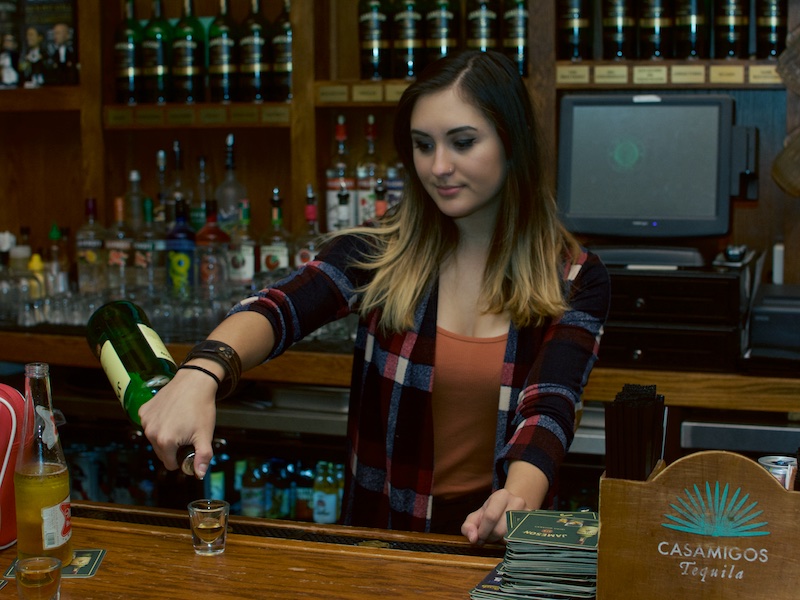 That said, I personally really like whiskey straight, with a water and a soda. I can’t do both cocktails and whiskey. I just get too drunk.

Do you get hit on a lot while bartending?

I do, but I really do have a boyfriend. I wouldn’t ever want to date anyone at the bar anyway because it could create awkwardness. I find it funny, however, when drunk people write their numbers and a comment on their receipt. One time a guy wrote his number and then, "I am a college kid." Not sure if I was supposed to be impressed or he was just sharing information, but I thought it was funny.

Ever get any fake IDs?

I have. I got one once from Illinois which, being from Chicago and having a real one of my own, was pretty easy to spot.

How do you cut people off who’ve had too many?

I will always recommend water. If someone is really drunk I will just give them a pitcher of water with a straw.

Being from Chicago, do Milwaukeeans sometimes give you shade?

Yes, sometimes, but in a playful way. I do like the Cubs, but I like the Brewers, too. I just really like baseball. Fortunately, I don't care enough about football to get in a heated argument about it and after a year of working in a Wisconsin sports bar and grill, I think the Packers are pretty great.

Where in Chicago did you work?

A bunch of places, but the places that had the most impact on me were Macello Ristorante – they have amazing, wood-fired pizzas – and Vincenzo’s Pizzeria in the West Loop.

What else do you like about Milwaukee or miss about Chicago?

I like how Milwaukee is metropolitan but still has a hometown feel. There are certain things I miss about Chicago, particularly certain foods like pizza and good Italian beef, but I really do love Milwaukee.

What are your plans for the future – or are you more of a day-to-day person?

I recently went from being very "day by day" to having a talk with myself about what I want to do with my life. I made the conscious decision to stay in service, to continuing growing in the industry. I've been doing this since I was 16 and I really enjoy it. I didn't think for a while it could be a career, but I've changed my mind about that.

What other bars do you go to when you’re not working?

Sabbatic. And also Foundation, it’s on my block. I live in Riverwest and I really love its punk rock roots.

What do you like to do other than go to or work in bars?

I like walking and running. I like going down to the lake and clearing my head. After work I usually binge-watch some awful show or a documentary. I really like music, too – seeing live shows.

What was the first concert you ever saw?

Britney Spears, back when every young girl – and boy – (I) loved Britney.

You mentioned in passing earlier that you have a Sept. 11 birthday. What is that like?

It can be uncomfortable. I was 9 when it happened, and my class was in the middle of singing happy birthday to me when the announcement about the towers came over the school intercom. Since then, I've never felt like I’ve owned that day, nor that it’s about me. It’s a day about remembering. Also, when I tell people when my birthday is, they usually look kind of sad and say, "Oooooh."

Another random question: Do you have any pets?

My dog is the apple of my eye. I gave him a human name, Tyler, and he is the goofiest dog you’ve ever seen. When he came into my life, my whole life changed for the better.