Kelsey Miller has exactly one month of bartending under her proverbial belt, but she already digs it. And she can mix a mean Old Fashioned.

Kelsey Miller has exactly one month of bartending under her proverbial belt, but she already digs it. And she can mix a mean Old Fashioned.

Recently, OnMilwaukee.com stopped into Van Buren’s, 1682 N. Van Buren St., which replaced Libby’s, and chatted with Miller about road trips, reading and whether baristas or bartenders get hit on more often.

OnMilwaukee.com: What were you doing before tending bar?

Kelsey Miller: I was a barista at Colectivo. I worked in the Bay View, Riverwest and Third Ward cafes.

OMC: What made you trade coffee for booze?

KM: I went traveling for two months and when I came back I was like, "Hmm, I don’t even like coffee, but I like whiskey." So I decided to try working in a bar and I love it.

OMC: What do you like about it so much?

KM: I love bartending. As a barista people get a coffee and bounce. As a bartender, I get to know them better and spend more time talking to them.

OMC: Did you already know how to make cocktails before starting this job or have you learned on the fly during the past month?

KM: I knew how to make mixed drinks, but I learned how to make more complicated drinks, too. I really love to make Old Fashioneds, and people really seem to like them.

OMC: What is your favorite drink to drink?

OMC: Do you get hit on a lot while tending bar?

KM: Yeah, I hate saying I get hit on a lot – it sounds like I think I’m really hot or something – but yeah. I get hit on quite frequently. I can say I have a boyfriend, because I do, but I usually just laugh it off.

OMC: Where did you go during your two-month road trip?

KM: My boyfriend and I went to Florida and then to California. We were basically hanging out with family and friends and only spent two nights out of two months in a hotel. First we went to Florida, but then we found out one of my boyfriend’s films was being shown in a film festival in Los Angeles, so we decided we had to drive from Florida to California. I got a job in a diner for three weeks to make some money to get us there.

OMC: What kind of car were you driving and did you have any car trouble?

KM: It was a ’98 Honda Civic and, surprisingly, no. We did not have any trouble at all. It was awesome.

OMC: I noticed you have a tattoo on the back of your neck that says "leaves come tumbling down." What does that mean?

KM: Apparently, when I was a baby, I cried whenever a man held me, except for my grandfather. He made up a song that he would sing to me and that was one of the lines in the song. He passed away when I was 7 or 8.

OMC: Aw, that’s sweet. Did you grow up in Milwaukee?

KM: No, I lived in Eagle until I was in high school and then my family moved to Pewaukee. I moved to Milwaukee practically the day I graduated from high school. My two older brothers were already living here.

OMC: What neighborhood do you live in?

KM: Right now I live on the East Side, but I am moving back to Riverwest on June 1 and I am really excited to go back. Most of my friends live there. 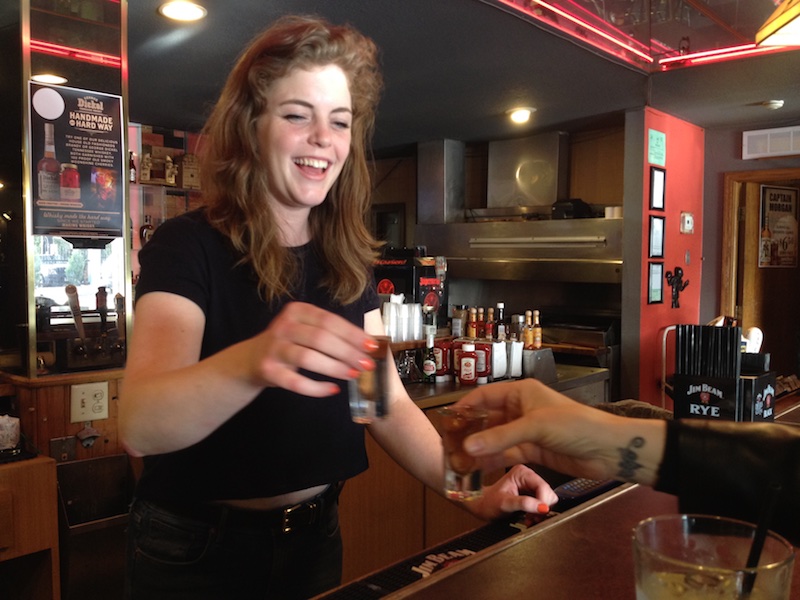 OMC: What do you like to do when you’re not working?

KM: I like to read. Currently I’m reading "God Bless You, Mr. Rosewater" by Kurt Vonnegut. I also like to make art, but no one ever sees my stuff. A lot of my friends don’t even know I do art.

OMC: What are some of your favorite Milwaukee bars?

KM: I like Bremen Cafe, Linneman’s – places with live music in Riverwest. On the East Side I like Hotel Foster, Yield.

OMC: Do you want to move from Milwaukee someday?

KM: I don’t know what the future will bring, but I really love Milwaukee. My family is here and I can honestly say, after traveling to other places, that you never experience friendliness like you do in Milwaukee. I’m really excited for Milwaukee to get the streetcar. That’s going to be really cool. Granted, it’s in a few years, but it’s going to make more parts of the city accessible.

OMC: Do you have a "bucket list" of places you want to visit someday?

KM: I really want to visit the East Coast. I was fortunate as a kid, I got to hang out with my family a lot and go camping, which was awesome, but we didn’t have a lot of money so I didn’t travel much. I want to go anywhere I’ve never been before. Europe. And my best friend was in Thailand for the last nine months and I would love to go there and see what’s up in Thailand.

OMC: In your 22 years of life, what is one thing you’ve found out to be true?

KM: As simple as it sounds, when you’re good to people, people are good to you.