Bay View's first hotel, the Kinn Guesthouse, at 2535 S. Kinnickinnic Ave., may be small - it only has eight guest rooms - but it offers a big experience. It's the kind of place guests will remember long after visiting.

Almost exactly a year ago, we went inside the building that now hosts Bay View’s first hotel, the Kinn Guesthouse at 2535 S. Kinnickinnic Ave. to see its progress.

Kinn and Kindred opened just a few months later and because it’s hotel week here at OnMilwaukee, we went back to see and experience the finished product.

The hotel may be small – it only has eight guest rooms – but it offers a big experience. It’s the kind of place guests will remember long after visiting.

First of all, it’s housed in a stately two-story building on a corner – giving it even more prominence, as does the fact that it’s built atop an elevated lot – that was erected in 1895 as a home for the Masonic Lake Lodge.

When the lodge moved to a new building on Howard Avenue in the 1960s, the KK Avenue place went through a variety of incarnations, housing, among other things, a Chinese restaurant, a music club and a tavern. 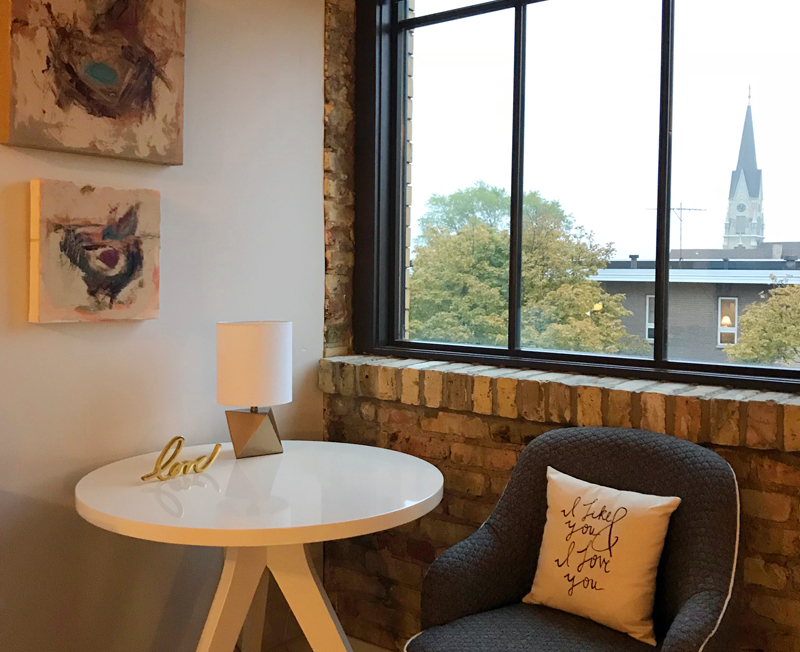 Kinn is, almost amazingly, the first hotel to rise in the ever-expanding Bay View neighborhood. It’s a two-minute walk to at least three guitar shops; a Colectivo; Tip Top Atomic Shop vintage shop and Luv Unlimited; Acme and RushMor Records; Odd Duck, Cafe Lulu and a host of other great restaurants; Burnhearts, Tonic, The Highbury and many other great taverns; the Avalon Theater; Voyageur Bookshop; and much much more.

Why wouldn’t anyone visiting Milwaukee want to spend their nights in Bay View? 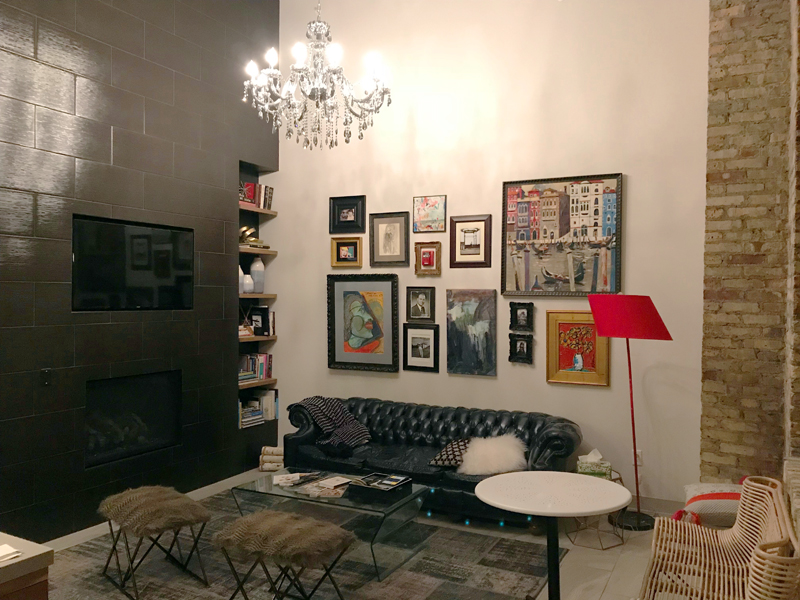 While Kinn could’ve easily added another revenue-generating guest room with a view over Kinnickinnic Avenue, owners Charles and Connie Bailey opted instead to create a communal space that is like a living room, with a fireplace, comfortable seating, shelves lined with books and a flat-screen TV.

"Increasingly people don't mind living among other people," Charles Bailey told me last year. "I just took it one step further and designed a space for that was specifically for that kind of demographic. We have the bar and restaurant downstairs, if they want to go downstairs for lunch or dinner or a cocktail, they can do that. But if they want to stay up here and just chill ... when's the last time you were at a party and you weren't hanging out in the kitchen? There's something about a kitchen. This to me just felt like home.

"There is a different sort of conversation that might take place in an environment like this as opposed to sitting down next to somebody in a bar. This is like bumping into somebody in your own family room. That, to me, is a really appealing thing."

The space gives the hotel a really open, welcoming vibe and offers a chance to avoid the anonymity that shrouds a stay in a large hotel where, at best, you might nod at another guest when passing in the corridor. At Kinn, you’ll likely share morning coffee or an evening cocktail with at least one – but likely more – of your fellow guests. 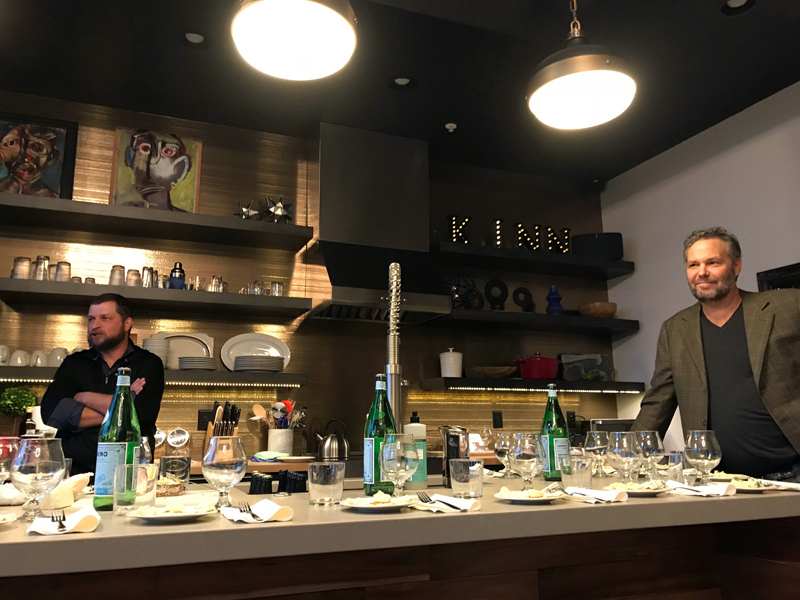 Central Waters Brewing's Anello Mollica and Kinn's Charles Bailey at a beer and cheese tasting event at the hotel.

Part of the communal space is given over to a full kitchen, which allows guests to make their own meals. It is also used for guest-only events, like the incredible beer and cheese tasting the night I stayed that found more than a dozen of us gathered around the kitchen island sampling Wisconsin-made brews and cheeses with Bailey and Central Waters Brewery owner Anello Mollica. 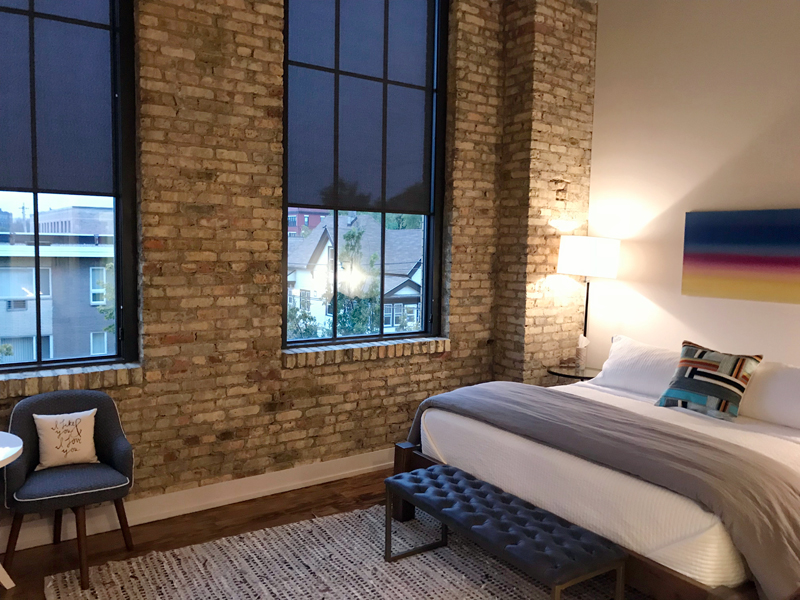 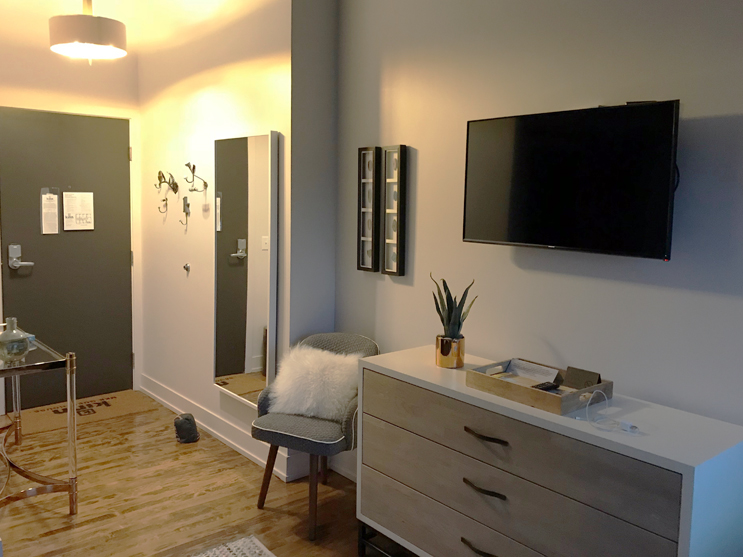 If you’re like me, while you enjoy the social aspect of a place like Kinn, you likely also want some time to unwind, maybe with a book, maybe with the TV and a glass of wine. And the rooms at Kinn offer that respite.

They’re a decent size, though not huge, but the ceilings are high and the windows expansive, creating what feels like a much larger space. Bright and airy and tastefully appointed – and, man, the beds are comfortable (something you can’t always say of a hotel) – the Kinn rooms are the kind you might not ever want to leave. 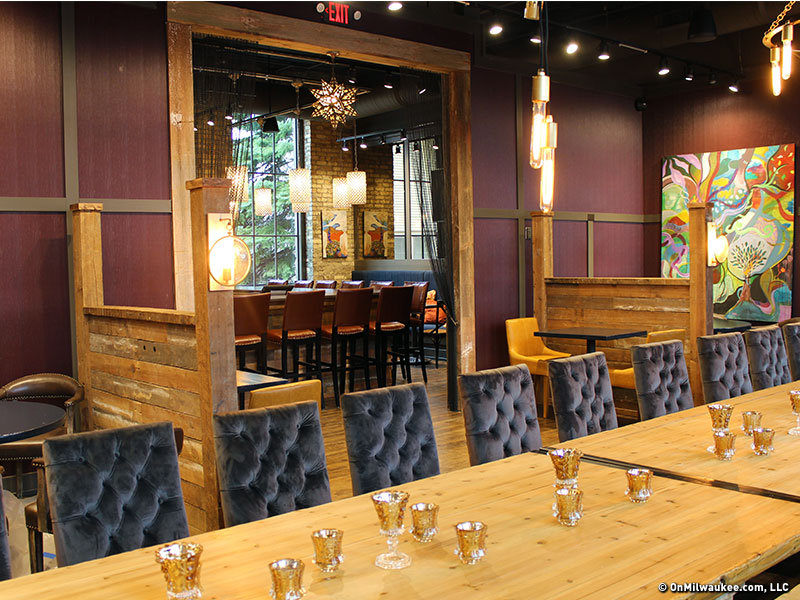 Of course, Bay View is full of great restaurants, and one of them is located right below the hotel. Kindred – run by sister Marija and Vesna Madunic, who also own Firefly in Wauwatosa and Gracious Events catering – is a cozy, dimly lit place with great cocktails and an inventive menu created by former Le Reve chef Patrick Murphy, who recently returned to Milwaukee after a globe-trotting stint.

Like Kinn, Kindred offers a communal dining experience at a long wooden table given pride of place in the heart of the dining room, or a more intimate evening at a two- or four-top table on the periphery.

When dinner’s over, your commute back home is just up a few stairs.

For a preview peek at Kinn, check out this cool 3-D feature.