It's postseason time in college basketball, and Marquette begins its quest to be part of March's madness on Wednesday night with their Big East tournament opening-round game against St. John's.

It’s postseason time in college basketball, and Marquette begins its quest to be part of March’s madness on Wednesday night with their Big East tournament opening-round game against St. John’s.

The seventh-seeded Golden Eagles (19-12, 8-10) face the No. 10 seed Red Storm (8-23, 1-17) at 8:30 p.m. CT at Madison Square Garden in New York City, hoping to win the first of what head coach Steve Wojciechowski believes will need to be all four games, in order to earn the conference’s automatic bid to the NCAA tournament.

After an impressive nonconference campaign, in which it went 10-2 and beat LSU and Wisconsin, Marquette – a talented but inconsistent young team prone to both runs of breathtaking play and bouts of mistake-filled ugliness – was streaky during the Big East season. Lose two, win two, lose three, win three. Beat then-No. 8 Providence on the road; lose at home a couple weeks later to bottom-dwelling DePaul. The Golden Eagles had seven games that were decided by three points or less, going 4-3 in those close contests.

Marquette finished the regular season with an RPI (ratings percentage index) of .5368, tied for 105th in the country, and a strength of schedule that was No. 118. With marks like those, for Henry Ellenson and friends to make the NCAA tourney, the Golden Eagles need to win four straight games at Madison Square Garden. Even just to make the NIT, they probably must win at least two, starting with the Red Storm, against whom they’re 3-0 in the tournament.

Since joining the conference in 2005-06, Marquette is the only team to have reached the Big East quarterfinals every year, though it has yet to play in the championship game.

The biggest thing the fledgling Golden Eagles have going for them is Ellenson, the 6-foot-10 freshman phenom who was third in the Big East in scoring (16.8 points per game), first in rebounding (9.8 per game) and tied for fifth in blocks (1.5). He’s big, strong, athletic and versatile – capable of handling the ball, distributing out of double-teams and knocking down three-point shots. Ellenson has been scouted by NBA evaluators all season and is likely to be Marquette’s highest-drafted player since Dwyane Wade was picked fifth in 2003.

The All-Big East first-teamer and conference Freshman of the Year suffered a sprained left ankle in the regular-season finale against Butler and has been listed as day-to-day, though he’s a virtual certainty to play Wednesday against St. John’s. The best players shine brightest under the biggest lights; Ellenson is one of the nation’s elite, and the Golden Eagles need him to perform like it at Madison Square Garden in one of college basketball's most celebrated conference tournaments. 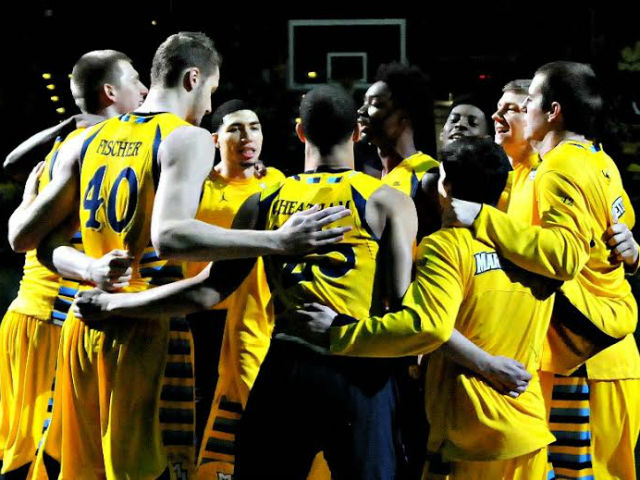 Marquette should also benefit from the continued improvement, and especially strong recent play, of their other two starting freshmen, guards Haanif Cheatham and Traci Carter. Cheatham, who was also named to the All-Freshman team, averaged 11.5 points, 3.2 rebounds and 2.2 assists per game this season. Over the last month, the aggressive off guard was putting up 16.3 points a game until being held scoreless against Butler. Carter has significantly cut down on the frenetic giveaways that plagued him earlier in the year, averaging 5.8 assists to just 2.1 turnovers per game over the final eight games and becoming a capable floor general.

The Golden Eagles, 9-10 in the conference tournament since joining the Big East, are no strangers to New York City, and they’ve had plenty of success there this year. Back in November, Marquette won both of its games in the Legends Classic at the Barclays Center in Brooklyn, beating then-No. 22 LSU and Arizona State. In January, after a one-day postponement due to a winter storm, it defeated St. John’s in Queens. Ellenson had double-doubles in all three games, averaging 16.7 points and 13.3 rebounds in the Big Apple.

The winner of Wednesday’s game, which will be broadcast nationally by FS1 with Bucks announcer Gus Johnson on play-by-play and analyst Bill Raftery doing the color, advances to face No. 2 seed Xavier on Thursday.