Michael Gaethke has worked at Water Buffalo since the day it opened in April 2007. OnMilwaukee.com recently stopped in for a cocktail and a chat.

Michael Gaethke has worked at Water Buffalo since the day it opened in April 2007. Accidentally, he started his bartending career at Mayfair Theater’s bar and restaurant where he worked as a server.

"Both a server and a bartender called in on the same day, so I got thrown into bartending," says Gaethke. "And I loved it."

Gaethke went on to work at Palms – now Onesto – for three years before coming to Water Buffalo.

"I love this place. The clientele is chill, the food is great and I love to make and serve drinks," he says.

OnMilwaukee.com: What is your favorite part of this job?

Michael Gaethke: Lately, since I’ve become a father, I enjoy the social aspects a lot. I take care of my daughter all day before I come here, and I love it, but it’s great to interact with grown ups after being with an almost-2-year-old all day.

OMC: Has parenting changed you a lot?

OMC: What are your least favorite kids' shows?

MG: Actually, I get into her shows. "Doc McStuffins," "Sofia the First." Sometimes my fiancee and I will continue to watch ‘em even after our daughter takes a nap.

OMC: Your life sounds very satisfying and full, but what do you like to do with some rare down time?

MG: I play bar trivia. Or I go visit my friends who are working at bars. Especially PK (Paul Kennedy). I go wherever he is – Tonic Tavern. Sabbatic. Also, I’m in a band.

MG: It’s called Element 13. It’s a cover band. I’ve been in the band – I play guitar and sing backups – for about 10 years. It’s fun, we do a lot of weddings. "Jessie’s Girl," "Brown-Eyed Girl." A little bit of everything. We aim to please and get people dancing. We also play a lot of festivals.

OMC: Are you scheduled to play any festivals this summer?

MG: Yeah, so far we have a couple of dates at State Fair and a couple others that are in the process of being firmed up.

OMC: What is your favorite drink to make?

MG: I love drinking and making a classic Old Fashioned.

MG: I love beer. I’ve been drinking it for a long time and I love how much I’ve learned about it on the job. I’m really into porters right now. I love trying new things.

OMC: Did you grow up mixing drinks for your parents or grandparents?

MG: No, parents didn't drink. Well, my dad drank a little, but not much. Although the first time I tried a beer was one I took from my parents’ fridge. I thought an MGD (Miller Genuine Draft) was a soda. I took a swig and then ran outside and told my dad, "This soda is terrible!"

OMC: What’s something about Water Buffalo people might not know?

MG: This is a huge "first date" place.

OMC: Can you usually identify a first date couple?

MG: Absolutely. It’s usually pretty much the same. Awkward at first, but if it’s a match, it moves into great conversation.

OMC: Were you born and raised in Milwaukee?

MG: I was – on the Northwest Side. I went to Milwaukee Lutheran and then I moved to the East Side to go to UWM.

MG: I really love Bay View. I liked living on the East Side but my van got towed all the time so I needed to live somewhere with a great scene and my car wouldn’t get towed.

MG: When my daughter is older I want to take her to Disney World. I want to go a lot of places: France, Australia. Right now, though, we’re focusing more on our life here. My fiancee is in grad school and we’re getting married next April.

OMC: What’s something that you want to accomplish in your life?

OMC: I saw a Groupon for skydiving recently … 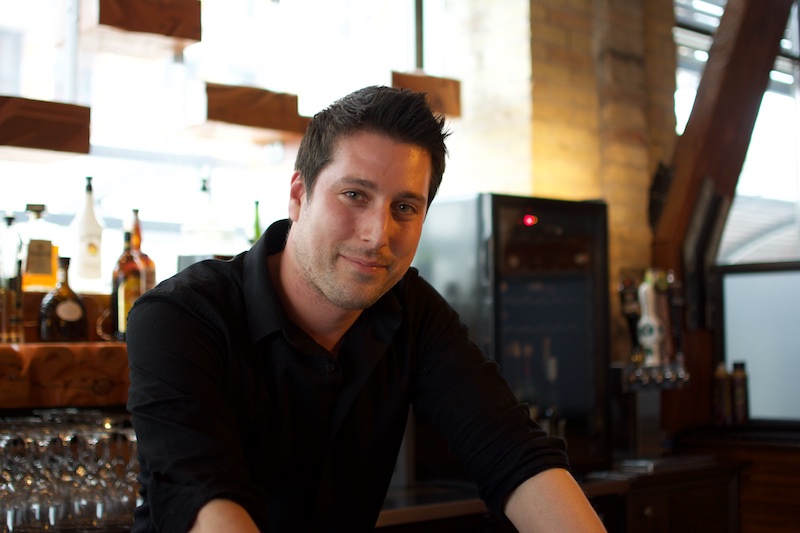