I tried microblading and it was amazing

I finally got my first tattoo. It was a bit of a vain decision to do so in actuality - but one I would never take back. You see, my first tattoo was actually eyebrow microblading.

I finally got my first tattoo. It was a bit of a vain decision to do so in actuality – but one I would never, ever take back. You see, my first tattoo was actually eyebrow microblading.

As a blonde "ish" light skinned lady, eyebrows have never been my strongpoint. In fact, I really had no eyebrow game at all. I’d fill them in every morning and have tried just about every eyebrow product on the market.

So, when I heard about microblading, I was nervous about my first tattoo – even if only semi-permanent – but was quite willing to put myself on the table as a guinea pig in search of new and bold brows.

And I’m never using another eyebrow product again after trying it.

In case you’ve been in a nutshell and haven’t heard of it, manual microblading is a form of semi-permanent tattoo that involves using tiny needles (instead of a tattoo gun) that make up a small blade to help deposit pigment under your skin.

The cool thing about microblading is that you can have zero brows, blonde ultra-faint brows (me!), have lost your brows due to alopecia or just need a little help filling your arches in – either way, the process creates the appearance of naturally full brows. It even creates a custom color that matches your natural brow color and uses several shades, so they look multidimensional and natural.

I'm not going to lie, I was kind of nervous about the whole semi-permanent part of this procedure, but at the beginning of my appointment, Diana, of Beauty by Diana in Honeycomb Salon, reassured me that'd she'd draw in my brows first to make sure I was into them. And damn if I wasn’t!

Diana began by smearing numbing cream across my brows, meant to mitigate pain during the procedure. After letting it sit for 30 minutes, she moved on to step two: choosing the ink color she’d be using to tattoo me. For the first round of the procedure (there can be as many as three touch-up visits), Diana tries to match the shade to a client’s natural hair and skin color profile as closely as possible. You don’t want "sharpie" brows, right? Me neither! 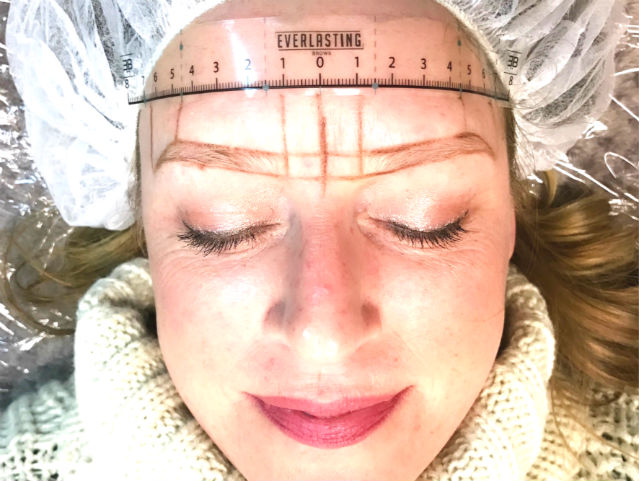 She then started to draw hair-like strokes with the tool to mimic natural hairs in my brows. Even though it's not as deep as the regular tattoo, it's still a tattoo because pigment is implanted under the skin. The beginning strokes, or first pass as she calls it, I felt a slight scraping of sorts – but not pain. The sound was a little creepy in my own head, but I can be a bit of dramatic baby, especially with pain or needles on my face.

The second pass I felt the cuts a bit more. Cuts sound painful, I know. It was pain similar to a extraordinarily bad tweezing session—you know, when your skin is especially sensitive, and you can feel every single damn hair being ripped out one by one? Fist-clenching and teeth-gritting pain for sure, but not quite crying pain.

I had a few tears the third and final pass, but grit through it, girls. It is SO worth it. Plus, as you'll see above, I have absolutely no pain threshold. The procedure at this point was only 45 minutes or so of actual blading. That’s really it. Less than an hour of discomfort and a year worth of fantastic brows? Yes!

I couldn’t believe how good they looked immediately afterward. I sat up, looked in the mirror and was amazed at not only the transformation but also how my brows area didn’t look like they were just needled into my skin. Minimal redness and swelling was visible and they looked AMAZING. I even went out that same night!

I was instructed to keep my eyebrows constantly moisturized by applying Aquaphor in the morning and at night, and I tried avoiding my eyebrows as much as possible when washing my face for the first week, just to be safe, as direct water is a no-no.

For the first few days, my new brows looked slightly red-tinted. Diana had told me that this was to be expected: the reddish hue was from my irritated skin and not the ink itself. They felt a little rough and scabby if you touched them. By day five, it had faded, and my brows were a dark brown (but thankfully still looking totally on fleek). Each day my brows got progressively lighter, and by day six or so, they’d settled on their current wonderful shade. You can see these bad brows loud and proud a few days later below.

I’m a busy, sometimes procrastinating professional, so I went in for my touch-up session about eight weeks after when you would typically go in at six. Diana had kept in touch during the eight weeks on my feelings on her handiwork and was ready to add a little warm to my brows in the session. Diana numbed me up, added some warmer tone strokes and added a bit more depth. But this was all so minimal and I have no idea if I would have even noticed a difference.

The beauty of Diana – see what I did there? – is she is a perfectionist. She’s also the sweetest, and an ultra-professional. She was one of the first – if not the first – to offer microblading here in Milwaukee and talked through the importance of training, licensing and experience in picking a provider before proceeding with my new crazy beautiful brows. She is the full package.

A full microblading – consult plus sessions – at Beauty By Diana is typically $495. Lucky for you, she is currently offering a promo price of $395. A bit of sticker shock for some I'm sure, but after doing it I can say my current – and not filling them in every day! – brow situation is so good I would happily pay it time and time again for a year or more of these lovely brows. Your time is worth money, too!

Beauty by Diana recently added a few more procedures to her arsenal as well and I am quite tempted to jump on her bed asap to get one. If you’ve been contemplating a manual eyeliner or lash enhancement she is your girl. She’s the first (again!) to offer this in the area, so book that appointment asap before she’s booked out for months. She even has a special running on it right now too – the regular liner rate is $350 but you can get a promo of $250 if you take advantage now.

Microblading: my second and final session

My first time: Getting a facial and a makeover at 40