In an ever-expanding craft brewery scene, what can a brewery do to set itself apart? For Milwaukee-based MobCraft the answer is crowd-sourcing. MobCraft, 505 S. 5th St., seeks input from beer lovers around the globe about the kinds of beer it ought to make in its Walker's Point Brewery.

In an exploding and ever-expanding craft beer scene, what can a brewery do to set itself apart from the crowd? For Milwaukee-based MobCraft, the answer is crowd-sourcing.

MobCraft, 505 S. 5th St., doesn’t crowd-source money, instead it seeks input from brewers and beer-lovers around the globe about the kinds of beer it ought to make in its Walker’s Point Brewery.

MobCraft was founded in 2011 in Madison by Henry Schwartz and Andrew Gierczak. In 2016, the brewery moved to Milwaukee, opening in a 1945 industrial building designed by R. A. Messmer & Brother for Fred Olson & Son Motor Service, a shipping business. 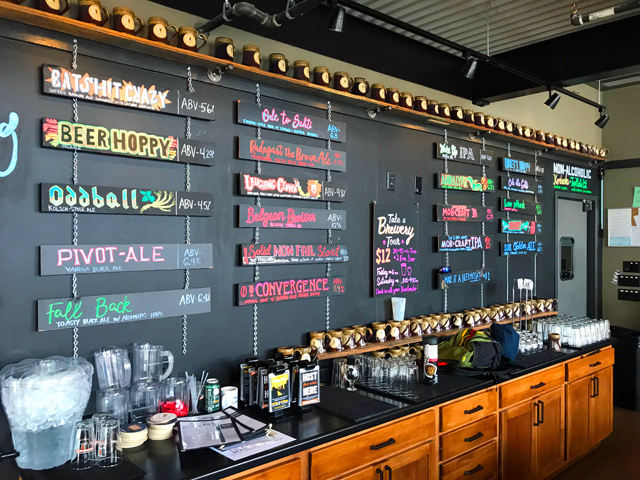 "We're the first crowd-sourced brewery in the world," Bradley Ward, MobCraft's assistant taproom manager, told me when I stopped in for a visit. "Anyone can submit their ideas online.

"If your beer gets the most pre-orders, the most votes, we'll make a 30-barrel batch, maybe even more, if we think the beer will be extra-popular. We'll fly you out, if you're from another state, so you can help brew the beer. You can have a say in how the label's done."

And that’s not all.

"We'll also have a release party for you," Ward adds. "If you have a favorite local watering hole we'll send a keg there, and you and all your friends can have a little release party. And you get to drink it for free (here) as long as it's on tap."

"We have at least eight (entries) every month," he says, "and there are always people that are waiting to get their ideas in." 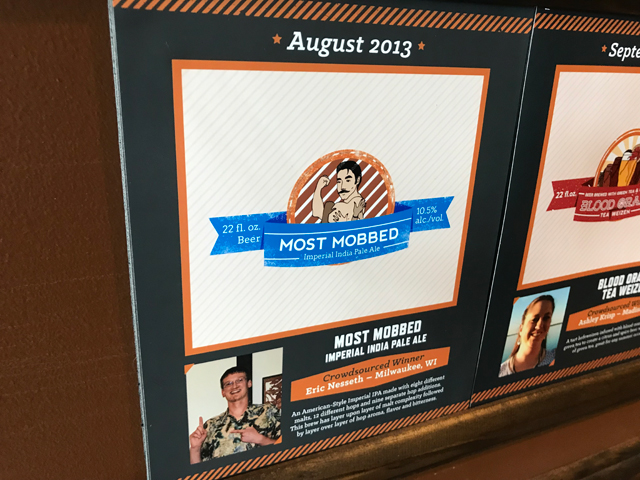 One of the more unusual was Don Durio’s Filthy Mustache, a pilsner brewed with cashews and stinky durian fruit.

"I didn't get to try it," says Ward, who arrived after that one was made, "but I heard the whole brewery smelled really bad for a while.

Trying such unexpected ideas often creates an interesting learning curve for the brewers.

"We had an eggnog beer win one time, which is great, but we hadn't learned how to time things out yet, so it won in December, and then we started brewing it, and it was ready in the summer." 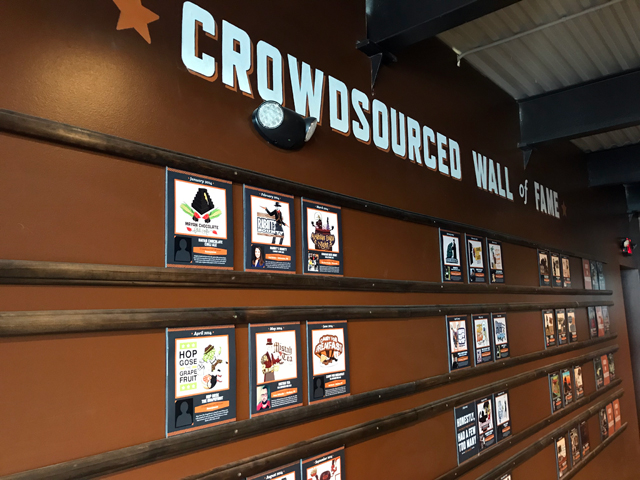 Then there was the barrel-aged scotch ale."That was aged in Laphroaig barrels," says Ward. "The peatiest beer I've ever had. So good. We thought it would take at least three months in the barrels. After six weeks, we were like, ‘It's so hot. Get it out.’

"I'm a big fan of it; it's called Clan MacDougall. But it was the most polarizing beer I've ever seen. It's kind of an acquired taste."

Every month there is a new winner and you can see them all on the brewery’s wall of fame in the taproom, where you can also typically sample a few. They all remain on tap at the brewery until supplies are exhausted.

"Every brewery has unexpected things happen all the time but, yeah, we do have to make a lot of interesting, challenging beers," Ward affirms. "We have a Brandy Old Fashioned beer that's coming out. An amber ale, aged in brandy barrels. We're always trying new, different styles."

Some folks have had more than one beer idea picked up by MobCraft. The creator of Aunt Hazel, which uses hazelnuts, also submitted a variation called Queen Hazel that’s currently being barrel-aged for release later this year.

"We’ve had, I think, two different three-peats now, (from) people who have kept submitting," says Ward.

The entries are whittled down by an initial round of voting and then pre-orders on the website determine which beers get produced at the brewery. 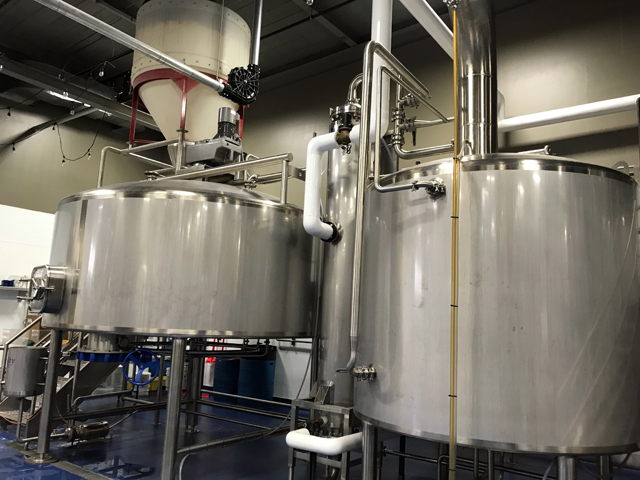 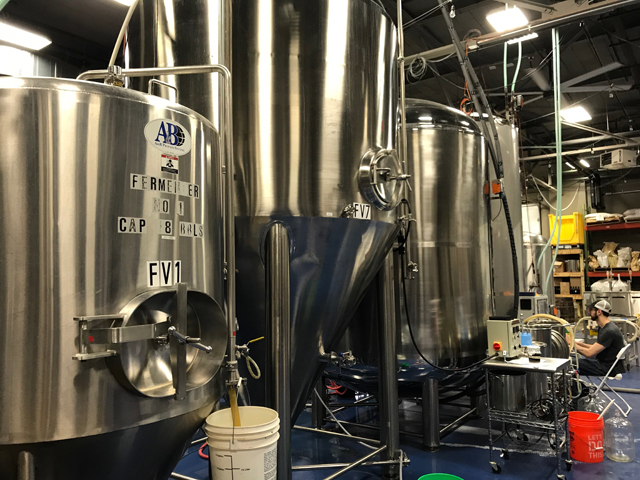 "We have a 30-barrel brewhouse," says brewer Josh Rechek. "We have about 360 barrels of total fermentation capacity. So, we can make a lot of beer.

"At any given point we can hold at least 500 barrels worth of beer on the clean side, and probably another 200 or 300 barrels of beer on the sour side. Last year we were just somewhere between 2,500 and 3,000 barrels for the year. This year, we're projected to come pretty close to doubling that." 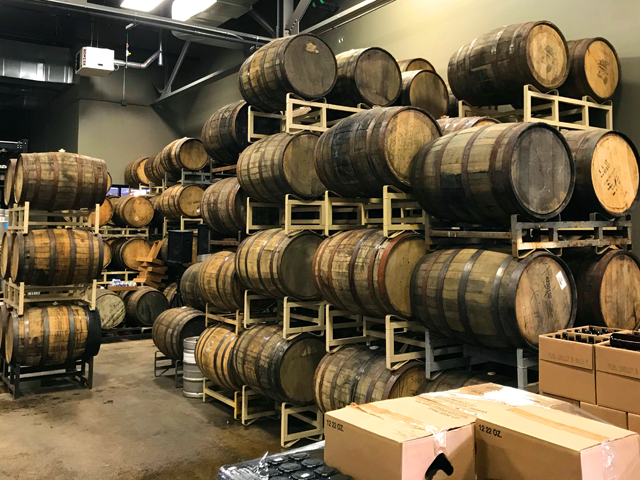 "Most of the changes have been processing-oriented," he says, "to be able to turn around what we already have quicker, and be more efficient with it."

As Rechek notes, MobCraft does focus a lot of energy on its sour program, which is the domain of Head of Barrel Operations, Adam Thomas.

"We have one of the only sour programs in Milwaukee," says Ward, mentioning 1840 Brewing, with which MobCraft is currently working on a collaboration brew. 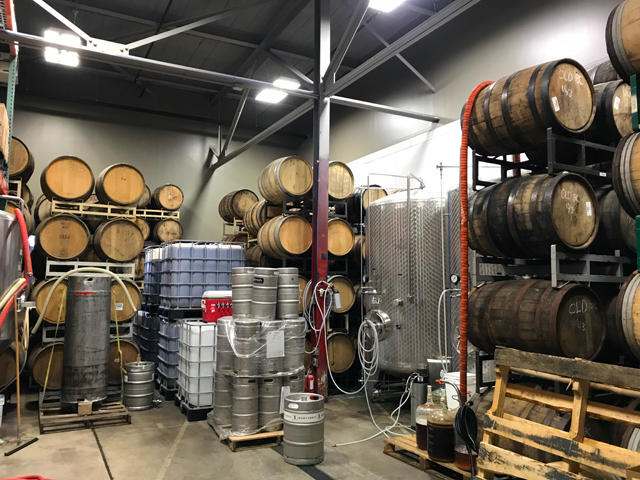 "Most breweries don't do sour wild beers. In this room (pictured above), this is all Adam doing a lot of crazy wonderful weird things."

There’s a wealth of information on the wild and sour programs – the beers of which are made with wild and often unpredictable yeasts – at the MobCraft website.

"Sour and wild beers are living and unpredictable," says Ward. "You'll have 10 barrels, you'll put the same beer with the same yeast in there, all 10 will taste a little bit different. And then you blend them together, you mix them together. It's a challenging thing to do because it requires a lot of skill, and then a lot of luck. And it could easily cause contamination (of other beer). So you've got to keep your sour stuff away from the rest of your beer."

Hence the separate room, though there’s a window that allows visitors to peek into the sour room from the taproom.

MobCraft also has bottling and canning lines, and a small pilot system (pictured below) to test out new things, too. 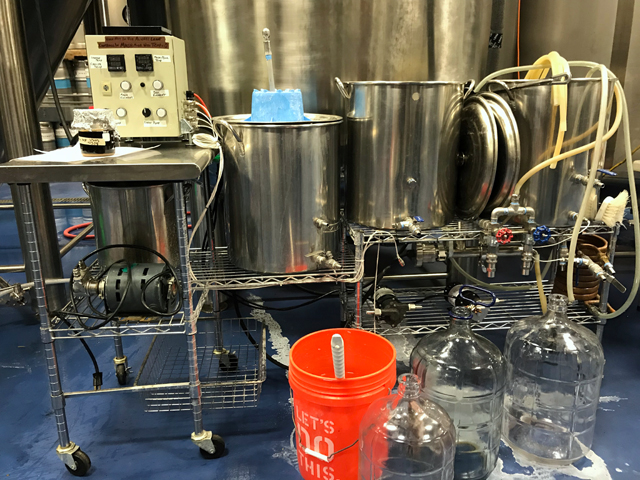 The taproom is a big area, with plenty of seating, a ping-pong table, a bar and garage doors that allow the party to spill out onto picnic benches on the sidewalk. Though work hasn’t yet begun, MobCraft is also adding a patio on the south side of the building.

Did I mention there are 24 taps? 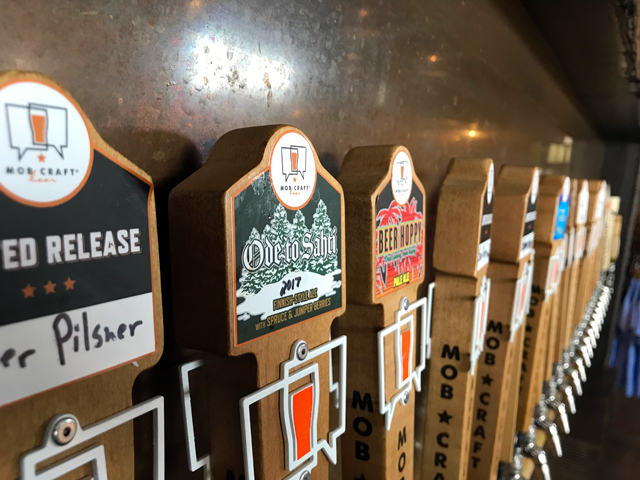 "Nobody has this many different beers," Ward says. "We do that because we also have our flagships. We have our crowd-sourced beers. We do small batches of things. When you have this huge mountain of barrels there's always something going.

MobCraft also offers tours on Fridays and Saturdays – as well as brewery yoga on weekend mornings at 10:30 – that last about 30-45 minutes. You can book a tour spot online. 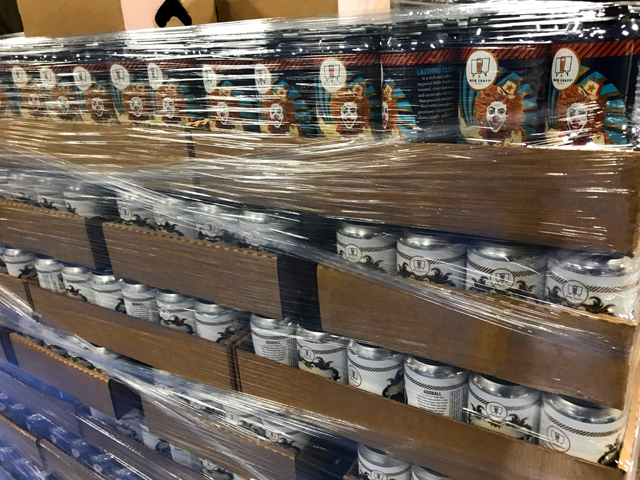 Tours cover MobCraft’s history, along with information on the brewery and on the wild and sour program. The $12.72 ticket also includes two beers.

"You also get to learn about our crowd-sourced model and even participate in it," says MobCraft’s Marketing Manager Jessica Isadora Traxler. "At the end of the tour you submit ideas which are put to a monthly in-house vote where we select a winner on Facebook Live. The winner we selected from last month’s tours was Not Your Muggle’s Beer, a butter beer.