Nine of the new stations were funded through a federal Congestion Mitigation/Air Quality (CMAQ) program grant awarded to the City of Milwaukee in 2013. The tenth station, located at the southeast corner of South 5th Street and West National Avenue, is funded through a new Tax Incremental Financing District (TID 85) created by the Milwaukee Common Council in September 2015 to support the reconstruction of South 5th Street and related improvements in the Walker’s Point neighborhood.

These 10 additional stations will once again extend the Bublr Bikes system to new locations north, south, east and west of the initial Downtown stations in the system:

"I am pleased that the Bublr Bikes bike share system continues to grow into our many city neighborhoods," said Mayor Tom Barrett. "I am proud of the work that our Department of Public Works has done to more than double our outreach and am happy that our partnership with Bublr Bikes is flourishing."

The City of Milwaukee received a $1.6 million federal Congestion Mitigation/Air Quality (CMAQ) grant to install approximately 30 new Bublr Bikes share stations in 2015 and 2016.  As of the new October 2016 installations, 30 stations have been funded and installed with the City’s initial CMAQ grant. The other Bublr Bikes stations have been funded through important partnerships with the University of Wisconsin-Milwaukee (five stations), Marquette University (one station), several individual local businesses, developers, TIDs and business districts. Bublr Bikes and the City of Milwaukee continue to actively seek community partners to raise private funds for more stations and to support ongoing system operations.

The Bublr Bikes system operates year-round – including winter – except when an official City snow emergency is declared. 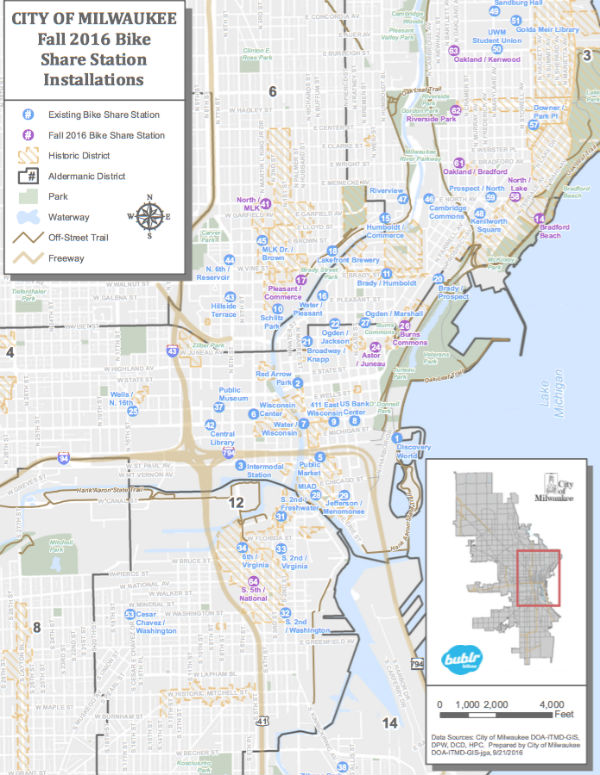 After 45 years in business, Rainbow Jersey Bicycles to close March 28

Tips to take advantage of the Tour of America's Dairyland