On the Burger Trail: The Brew Burger at The Explorium Brewpub

The Explorium Brewpub delivers on their promise of "juicy" half pound burgers.

The Explorium Brewpub made very good waves when it opened in January of 2017 at Southridge Mall. At the time, the mall location seemed unexpected; but thanks to a South Side audience hungry for its own micro-brewery and restaurant, plus benefits like ample parking, the brewpub quickly carved out its niche.

That success led to the brand’s expansion, with a second Explorium location opening in Milwaukee’s Third Ward this September.

Beyond beer, part of the allure at Explorium is its menu of well-executed beer friendly foods which range from stellar wings and sandwiches to full-on entrees, many made in the kitchen’s Woodstone oven.

Among those options is a section of “Juicy” half-pound burgers, including a few that fall outside the usual box. That includes their Quesadilla burger featuring a fajita-seasoned patty, pepper jack, cheddar, shredded lettuce and pico de gallo pressed and grilled between two tortilla shells ($13) and The Bomb, topped with bacon, cheddar, provolone, Livingstone's Porter caramelized onions then wrapped in pizza dough and baked ($15).

For this trip, I opted for a more classic preparation. The Brew Burger features a half-pound Black Angus beef burger topped with lettuce, tomato, house pickle chips and guest’s choice of cheese on a pretzel bun ($10 with fries, cheddar mashed potatoes or beer chips). 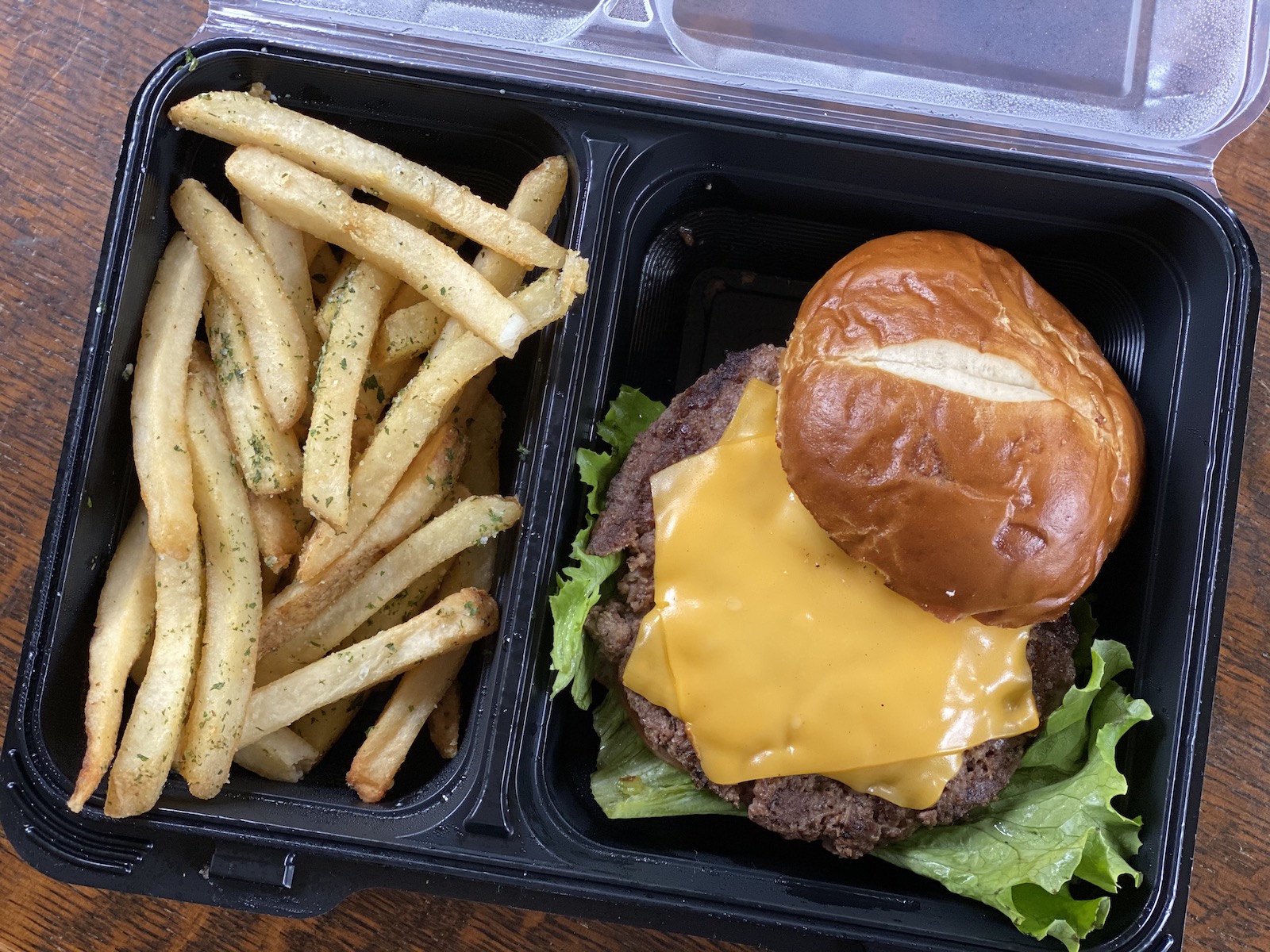 The burger came beautifully packaged in a plastic container with fries on one side and the burger on the other. Overall, that was a win. It presented beautifully, the slightly glossy bun neatly supporting the extra large patty and its topping of melted American cheese and showing off the flair of its ultra-frilly lettuce. They say we eat first with our eyes, and that was absolutely true here.

If you’ve read my reviews you’ll know I have a love-hate relationship with the pretzel roll, which all-too-often is simply an overwhelming choice for most burgers. But you’ll also know that I’ve encountered a few that work well, and this one definitely had that potential, largely because the dense bun was paired with a large patty that remained ultra juicy, so it didn’t entirely overwhelm the sandwich.

The bun itself was soft and fresh, with the typical density of a pretzel roll. It was slightly grilled, judging from the horizontal marks on the cut sides, but not toasted to the point of crispness. The bottom bun suffered a bit in transit, growing soggy from burger juices that collected in the bottom of the container; but I gave that a pass because a) juicy burgers are lovely and b) it did not, by any means impact the way the bun held up while I was eating it.

This burger patty was the star. The patty was somewhat uniform in shape, but loosely packed. It was also flatter than some half-pounders, which worked to its advantage. It sported a slight  exterior crust while also being cooked to order (mid-rare) in the center; there seemed to be consistency there as well, with a second burger exhibiting a slightly more cooked interior, but still within the boundaries of medium-rare.

The meat itself was juicy, as promised, and well seasoned with both salt and black pepper. In fact, it had a clean, meaty flavor that was only enhanced by the seasonings.

The lettuce was fresh and green; remarkably, it held up well even against the heat of the burger and transport. The tomato slice was fresh, but like so many, it suffered from a lack of both color and flavor, leaving it to lend only a bit of moisture to the compilation.

The house bread and butter pickles were lovely and slightly sweet. They were well distributed over the burger and lent a bit of acid, which was very nice. The cheese, which had little chance of covering the entire patty, still did remarkably well. It was nicely melted, however, and the two slices provided more than enough cheese flavor for the whole of the burger.

This burger didn’t need a lot of fuss to make it good. And it was good.  But it was missing the pop that could have made it great… something that stood up against the density of the bun and pulled everything together. Maybe a bit of mustard to complement the pretzel bun or a house burger sauce that offered a sweet, salty tang?

Ten bucks for a half-pound burger with fries? I’d have expected far less for the price. But what I got was a big juicy patty with plenty of flavor that was good, even in its simplicity.

If you want a juicy, beefy, well-seasoned half-pounder, you’ll find it at Explorium.