On the Burger Trail: Cheeseburger at Solly's Grille

Butter is the start of the show at Solly's, which is known for being one of (if not the) first to serve a Wisconsin butter burger. In fact, according to George Motz's documentary "Hamburger America," Solly's goes through 125 to 150 pounds of butter per week. 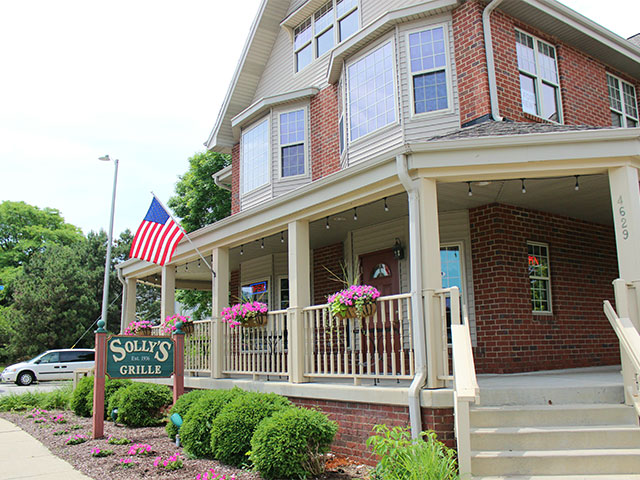 At Solly’s Grille, you can see the butter stacked up in the open kitchen. It looks like a pile of yellow bricks. And you can watch as pats of butter are slung – nearly as deftly as the burger patties – melting into a hissing pool on the flattop grill. In fact, according to George Motz’s documentary "Hamburger America," Solly’s goes through 125 to 150 pounds of butter per week.

It’s true. Butter is the start of the show at Solly’s, which is known for being one of (if not the) first to serve a Wisconsin butter burger. The restaurant has been a Milwaukee favorite since 1936 when Solly Salmon opened Solly’s Coffee Shop, a venue long since renamed Solly’s Grille. There, he created a burger that was – in glorious Wisconsin fashion – gilded with butter.

Today’s Solly’s is still charming and old-school. Two horseshoe-shaped counters accommodate guests. There’s athletic memorabilia including Brewers’ bobbleheads, framed jerseys and pennants donning the walls. And the crowd is comprised of both young and old – all eager to indulge in the burgers that made Wisconsin famous. 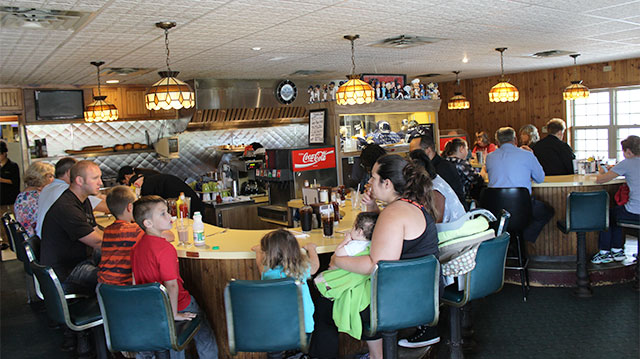 If you're lucky (or early, as we were), you'll find a seat right away. But, be prepared. During the lunch rush, the wait for a seat might be as long as 30 minutes.

On this trip, I ordered the Original Solly Cheeseburger featuring a sirloin patty with Wisconsin butter and stewed onions ($4.89) along with fries and a hot fudge malt (because old school malts are a no brainer when you’re at a classic burger joint).

There’s no fuss in the presentation at Solly’s, though the burger itself is quite the sight. Mine was a bit of a hot mess to begin, with melted cheese and fried onions oozing out at every potential place. But then the theater began. Within seconds of the plate’s delivery, butter began flowing off the hot burger onto the plate. It was a steady trickle. Some soaked into the bottom of the bun, but a significant amount pooled, leaving the entire plate coated with a thin yellow sheen.

The buns are standard. They’re of average size and very soft, which on the one hand is probably good, as they have a lot of butter to absorb. The problem comes in just that. Once saturated, the bun compacts, forming a doughy mass that’s not nearly as pleasant or supportive as it could be.

I wanted to love it. I really did. I pulled off a bit of the burger first (as is my practice) to taste what I imagined would be a hot, juicy sirloin patty. And I fully expected it to be even better than that … because, well … there was butter involved. Oddly, that wasn’t my experience. The burger itself was a thin, tightly packed patty. It wasn’t dry per se, but its flavor was largely masked by the sheen of butter on its surface. I’ve long been a proponent of the idea that "more butter is better." But, in this case, I was forced to face the reality that sometimes more butter is just that: more butter.

It’s not just the burger that’s swathed in butter. The stewed onions are as well. They’re sweet and flavorful, but they add an additional buttery component that – at least for me – felt excessive. The American cheese adds flavor (and additional richness).

Overall, I found the Solly’s cheeseburger to be pretty average across the board. None of the components (with the exception of the butter) seemed to stand out. And the burger itself seemed no more special than a mid-range burger soaked in glossy Wisconsin dairy fat. So, while $4.89 is probably a fair price, it’s (again) probably average for what you get.

It’s Wisconsin. So, it certainly feels like heresy to diss the godfather of all butter burgers. But hiking the burger trail is all about honesty. And, in this case, an excess of butter isn’t able to make up the balance for an otherwise average burger.