On the Burger Trail: The Double Dream Burger at Wonderland a Go-Go

How dreamy is The Dream Burger? Lori Fredrich paid a visit to find out.

Among the cadre of restaurants which opened in the past year, Wonderland was among the most whimsical. The venue, which specializes in scratch-made comfort foods, embodies the spirit of both an urban cafe and what owner Don Krause calls a modern "craft" diner. Named for a short-lived amusement park which operated in the early 1900s  in what is now Hubbard Park, the diner splashed onto the scene with a bold interior design and a menu that ranged from breakfast staples to fun snacks, nostalgic dinners and delicious desserts (most notably pie).

Unfortunately, the diner had a fairly brief run before the difficulties of the COVID-19 pandemic prompted a decision to close for a duration of six months. Fortunately, they’ve since re-opened as Wonderland a Go-Go, offering up a more fast casual experience with an abbreviated menu designed for carry-out.

Since I didn’t have the opportunity to try one of their burgers before they closed in March, I thought it was high time to head back and give one a try. The Dream Burger is available as both a single ($8) or double ($12) and can be customized to include bacon ($3) or a sunny-side-up egg ($2).  Gluten-free buns are available for $3.

Since I was trying it for the first time, I opted to keep it relatively simple. I ordered the double, which comes with two one-third pound fresh beef patties, seasoned butter, American cheese, lettuce, tomato and onion. It’s served on a toasted bun for $12. You can also order fries or housemade chips for $3 (incidentally, both held up reasonably well for take-out; but the chips transported flawlessly). 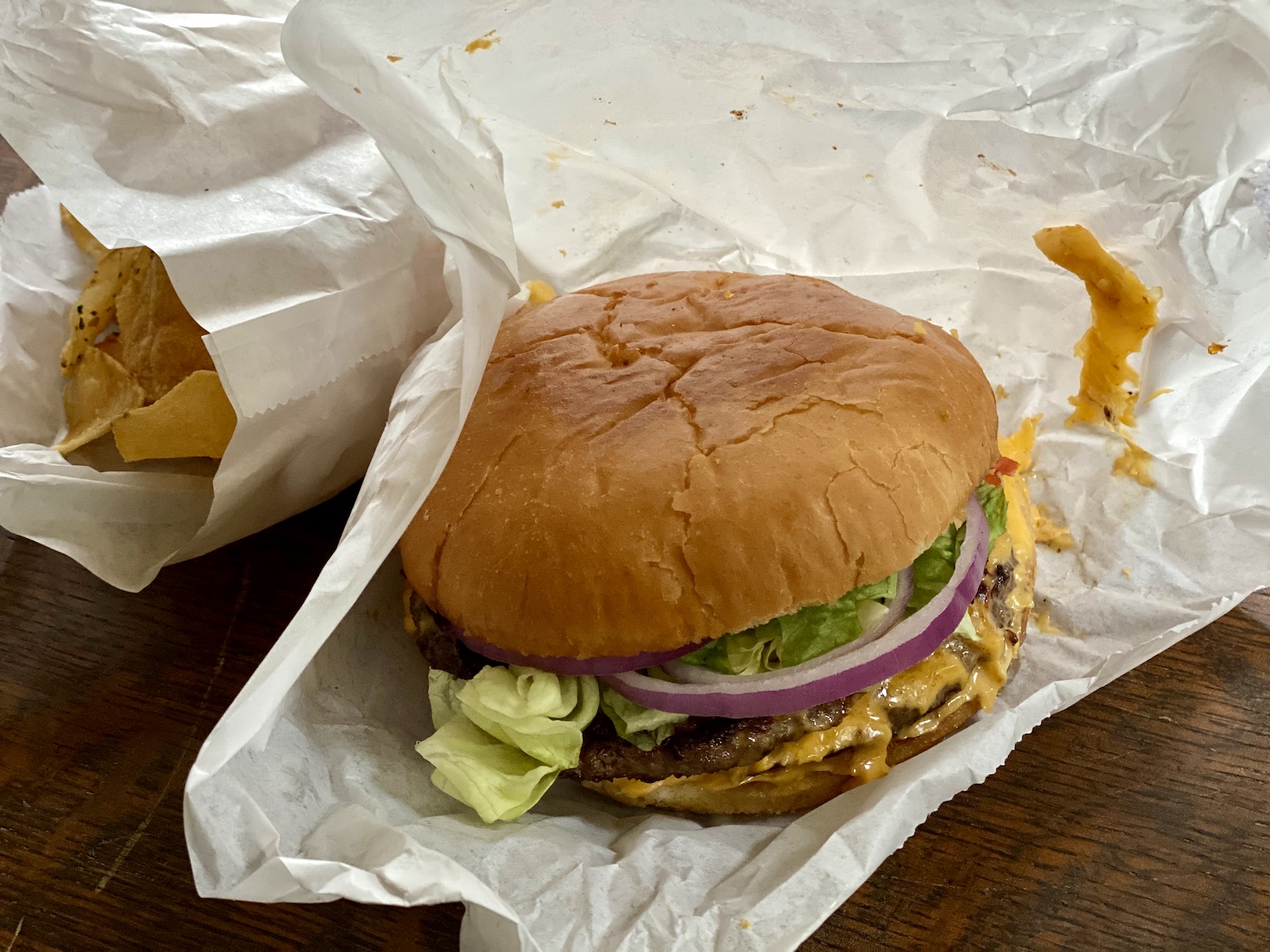 The burger wasn’t packaged in a way that would absolutely ensure great passage (it was simply tucked in a burger sleeve and placed inside a bag), but it fared beautifully. A bit of melted cheese stuck to the packaging, but all-told it looked great with its layers of chopped lettuce, tomato and onion all piled atop two nicely colored, cheese-covered patties. On top of everything, it was a monster of a burger which easily measured 5 inches across if I had to throw out a guess (I was, quite frankly, too hungry to haul out my tape measure).

There was something charmingly old school about the large bakery style bun, which boasted a slightly crackled top (but only on its very surface) and a robust, yet supple texture. It was toasted on both sides of the bun, giving its exterior a glow of warmth on the top and bottom and some light browning on the interior. Best of all, it was a good fit for the two patties, offering a proper bun-to-meat ratio (I can’t say if this would be true of a single; but it worked well for the double).

Both patties were relatively uniform in shape, but not to excess. They were moderately packed and showcased a nicely caramelized exterior on both sides. Both were cooked just about medium with a hint of pink still lingering here and there.  They were moderately juicy and pleasantly greasy with a subtle hint of seasoning which – if I had to guess – could be attributed to the seasoned butter. Eaten alone, they may have struck me as under-seasoned; but in the context of the burger and toppings, you’d never be the wiser.

First, I’ll admit I’ve gotten to a point where I sigh at the thought of tomatoes on a restaurant burger. While I love the idea of a lovely ripe tomato slice in every possible way, I’ve grown to eschew the pale, tasteless imposters that most restaurants try to pass off as tomatoes. They taste of nothing more than winter and sadness.

So I was floored (in a very good way) when I opened up my burger to find the most beautifully thin slices of ruby red garden ripe tomatoes inside. They were magnificent. The lettuce was also fresh and considerably crisp, even for the time it spent warming on its trip to my house.

The cheese, likewise, was nicely melted; and the onion lent a sweet, slightly sharp flavor and plenty of welcome crunch to the whole affair. Bravo, Wonderland.

The burger itself was well worth $12. The ingredients were of good quality and the balance of the burger was lovely. I felt as if I was paying for something worthy (yes, I was even happy to pay extra for a healthy portion of fries).

I might just dream of this burger… and its wonderful tomatoes.

Wonderland a Go-Go is open Tuesday through Sunday from 4 to 9 p.m. for carry-out. Limited seating is available for diners who wish to eat on premise. Hours are expected to expand as demand warrants.

On the Burger Trail: The Smash Burger from City Lights Brewing Co.