One tank getaway: A food lovers guide to La Crosse

La Crosse didn't spring to mind as I was contemplating interesting weekend getaways for the fall. However, it became an interesting challenge to research the area, pinpoint a few spots I was interested in visiting and plan what turned out to be a lovely weekend trip that left me both invigorated and refreshed.

One of the goals I set for myself this past year was to get away more, to take time to smell the roses and create time to explore new places. I can’t say I’ve been great at meeting that goal; however, the year did offer me a few opportunities for brief weekend trips and exploration, each of which I’ve taken on with gratitude.

La Crosse certainly didn’t spring to mind as I was contemplating interesting weekend getaways for the fall. However, when I was presented with the opportunity to visit the largest city on Wisconsin's western border, I was intrigued. I’ve not passed through La Crosse in years and knew very little about the city’s offerings. It became an interesting challenge to research the area, pinpoint a few spots I was interested in visiting and plan what turned out to be a lovely weekend trip that left me both invigorated and refreshed.

Along the way, I discovered somewhat of a hidden gem of a city with a burgeoning restaurant and brewery scene that’s smaller, but not unlike that of Milwaukee. 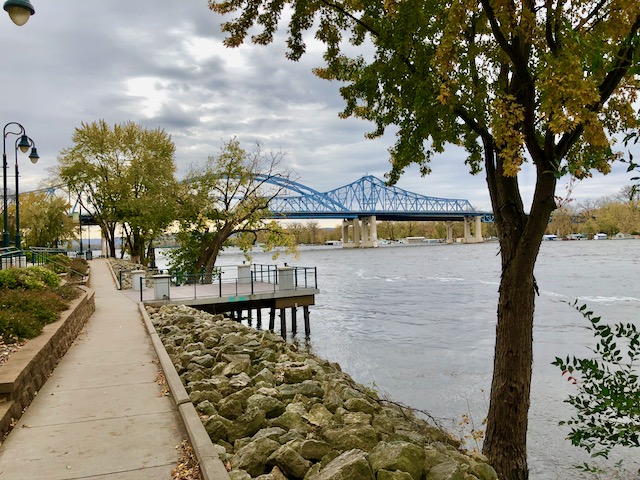 When it came to deciding where to stay, we settled on La Crosse’s only independently owned boutique hotel, the Charmant. Interestingly, it’s a sister hotel of sorts to Milwaukee’s Iron Horse Hotel. Located in a former chocolate factory with a fascinating history, it turned out to be one of the highlights of the trip, enough so that I wrote an entire article on the hotel, as well as the delightful dinner we enjoyed at the hotel’s rustic French-inspired restaurant. [Read more.] 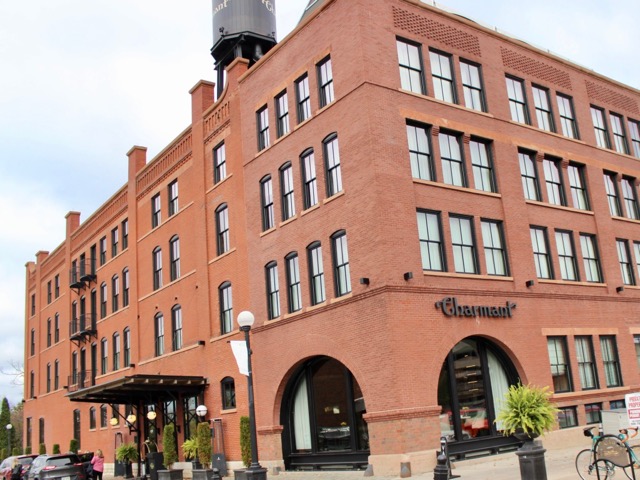 From the exterior, The Root Note looks only half as interesting as it should. After all, a step inside this bohemian cafe turned out to be an amazing way to experience a bit of La Crosse’s college town hipster chic vibe. 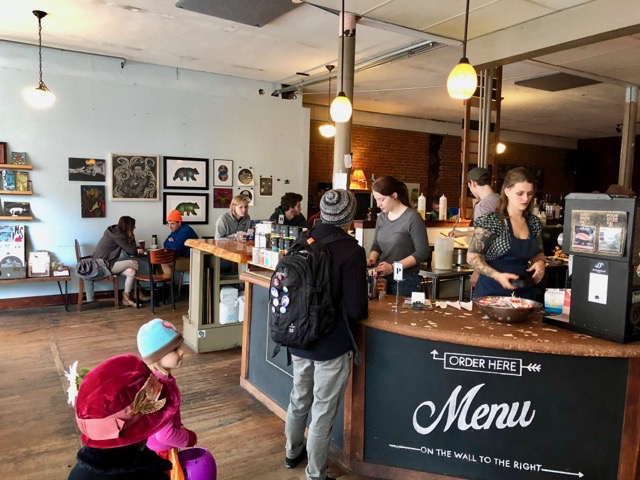 The space is filled with exposed brick walls, interesting art and random oddities that made me wish I'd have had more time to explore its nooks and crannies. 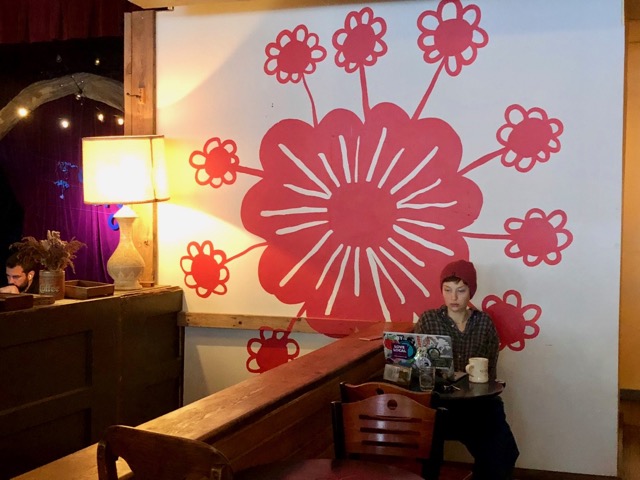 In some ways, the cafe felt like a step back in time to an era when grunge-era coffee shops were all the rage. But, it also felt interestingly contemporary with its simple menu of soups, salads and delicious crepes including one featuring bananas and nutella. Pair that with a nice cup of Kickapoo Coffee (a roaster located just a scenic drive away in nearby Viroqua) and it was the perfect spot to while away a relaxed morning. 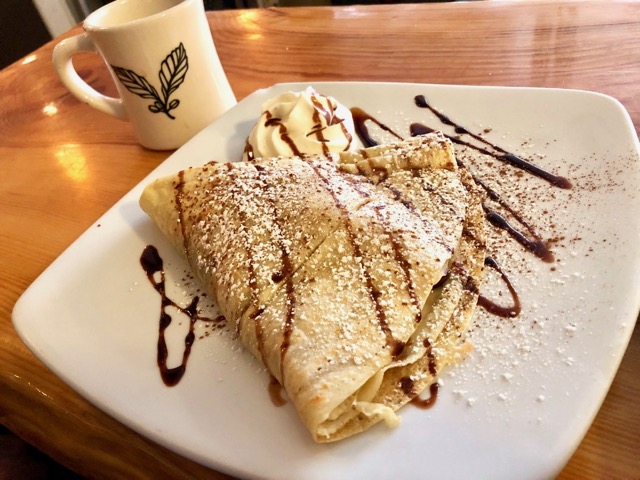 I was even more delighted to discover that the cafe comes complete with a small stage in back where they host live music nearly every night of the week. It’s a sure shot for another visit the next time I’m in town.

I wouldn’t exactly consider myself to be outdoorsy; but after taking a particularly scenic route to get to La Crosse, I became enamoured of the gorgeous geographical landscape that surrounds this river town. Located in a valley, La Crosse is surrounded by towering bluffs. Grandad, one of the most prominent in the area, has gained a reputation for its breathtaking views. I became more intrigued as the literature buff in me recognized that Grandad is the same bluff mentioned in Mark Twain’s "Life on the Mississippi." 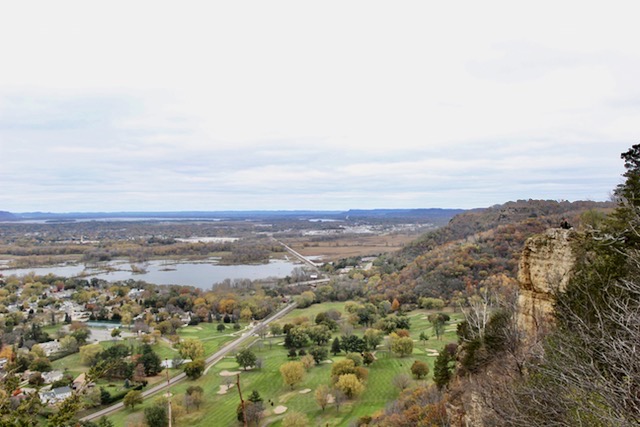 You don’t have to do much hiking to reach the top of the bluff, which is a short (but beautiful drive) from town. Once at the top, a short walk takes you to the overlook. Once you get past all the high school and college kids taking selfies near the edge of the bluff,  you'll be delighted by the stunning view of the city and the surrounding area, complete with Driftless region topography made all the more beautiful by the autumnal colors in the trees. 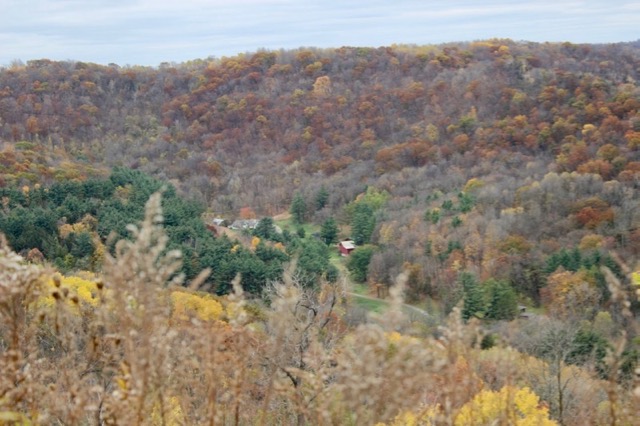 Since Viroqua is a mere 40 minutes from La Crosse, we thought it a shame not to make a visit to Driftless Cafe, home of 2016 James Beard semifinals nominee Chef Luke Zahm. Do as we did and grab a coffee and take the scenic route to the cafe. Once you arrive you’ll be treated to a fantastic meal at a quaint cafe where the food reflects a true local flavor, thanks to a commitment to sourcing from area farms.

If you're lucky, you'll be greeted by Zahm’s wife Ruthie who has helped him run the business since they took over the cafe in 2013. And once you see the menu, which is comprised of well priced dishes made with intention and love, you may not ever want to leave Viroqua. 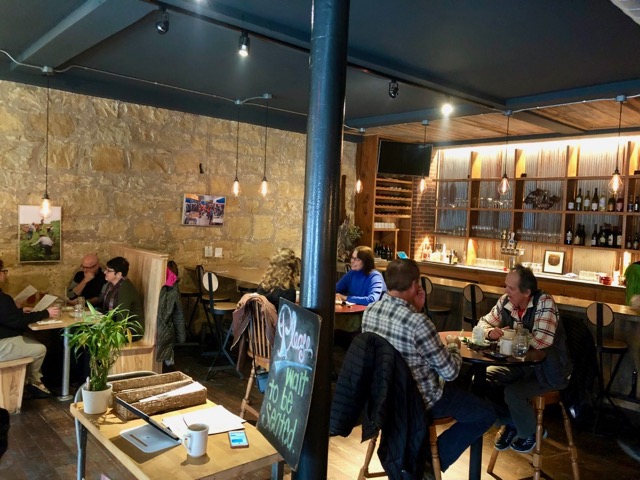 The lunch menu offered up simple dishes like (ah-mazing) housemade bratwurst ($10), homestyle bolognese ($11) and quite possibly one of the best Caesar salads ($7) I’ve eaten in my life. I only regret we didn’t have time to stay for dinner. 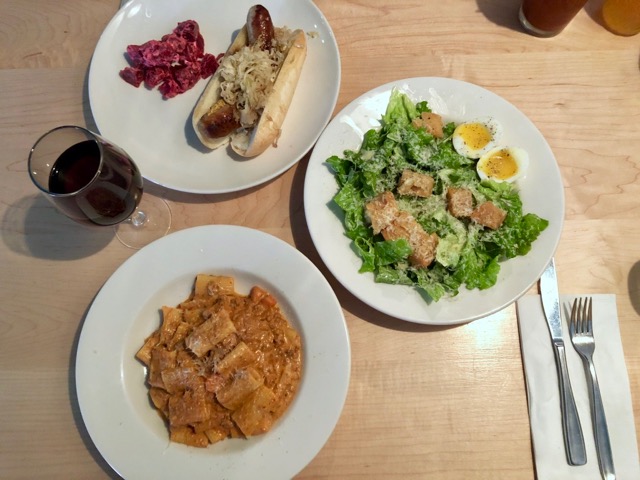 While you’re in the area, be sure to stop at Driftless Books & Music, where (if you’re anything like me) you can spend hours perusing dusty tomes and searching for interesting reads and rare finds. And there’s plenty to discover at this huge bookstore located in an old tobacco warehouse. 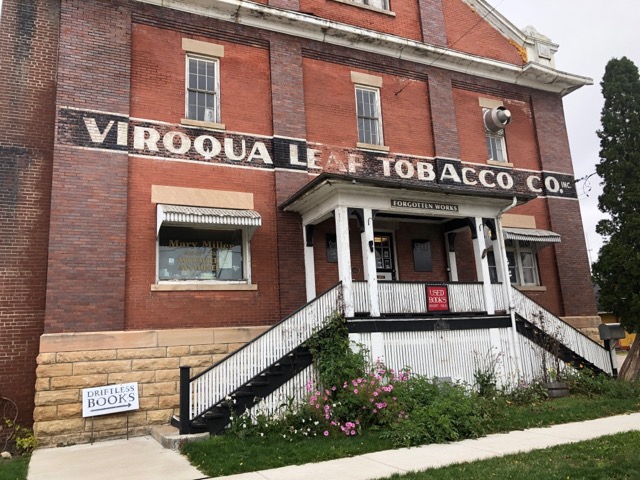 It’s a place that smells and feels like the independent book shops of yore (remember those?), maybe with a hint of tobacco thrown in for good measure. Owner Eddy Nix has purchased at least seven bookstores and acquired hundreds of book collections over the past fourteen years. In addition to books (and lots of cookbooks!), the shop showcases music (both CDs and vinyl), sheet music, art (some for sale, some just on display) and comic books. And, if you happen to visit in the evening, there might even be live music. 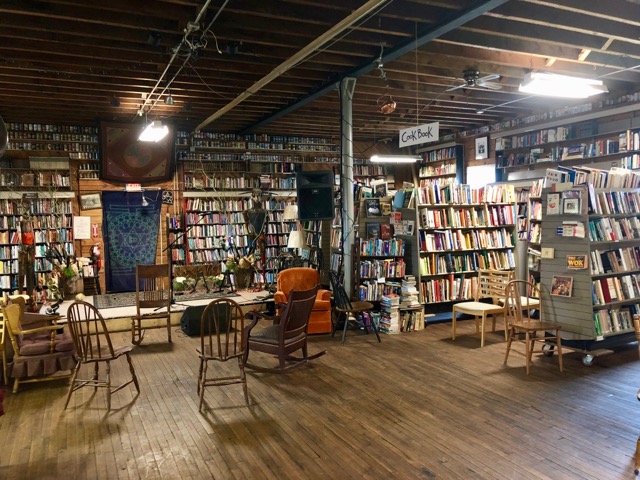 Don’t miss the opportunity to take in the fantastic mural just around the corner from the entrance. It’s even more impressive –  and evocative –  in person. 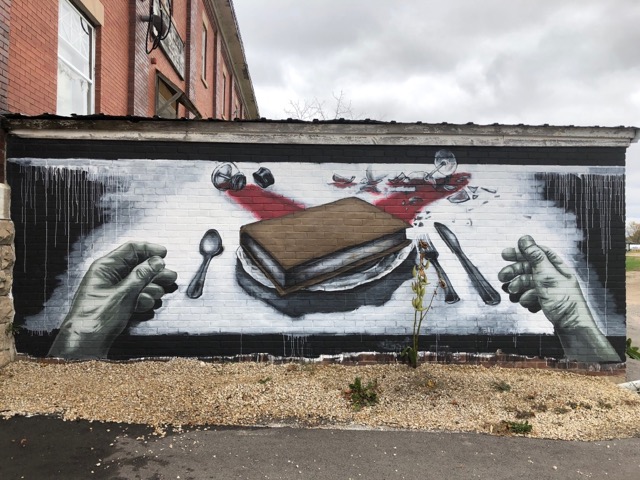 Turns out when you stop to smell the roses, you find some pretty cool stuff. In addition to that mural (above), we came across quite a bit of found art during our trip. Here are just a few examples of things we spied along the way. 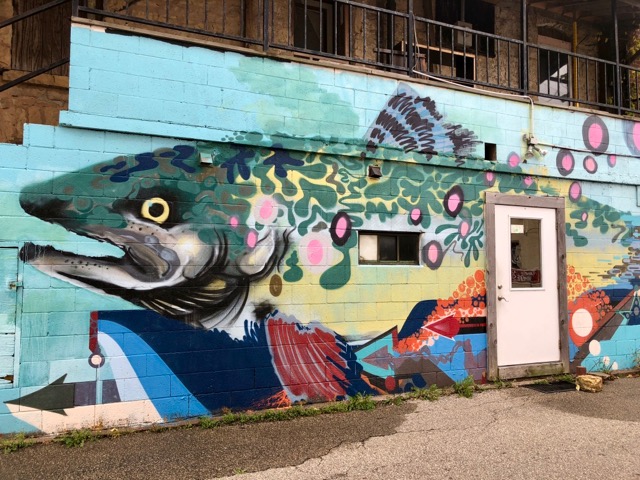 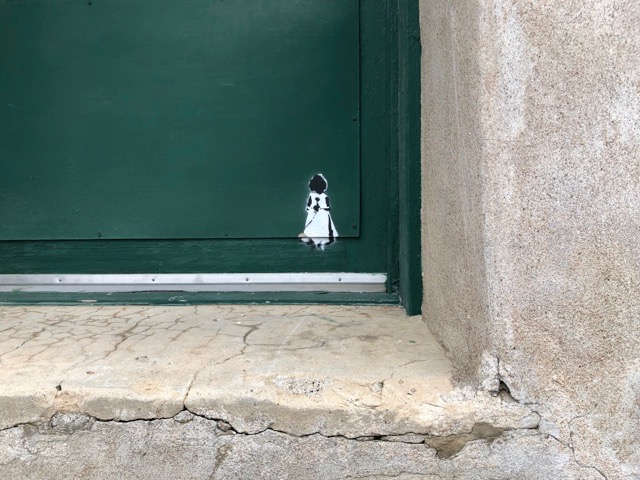 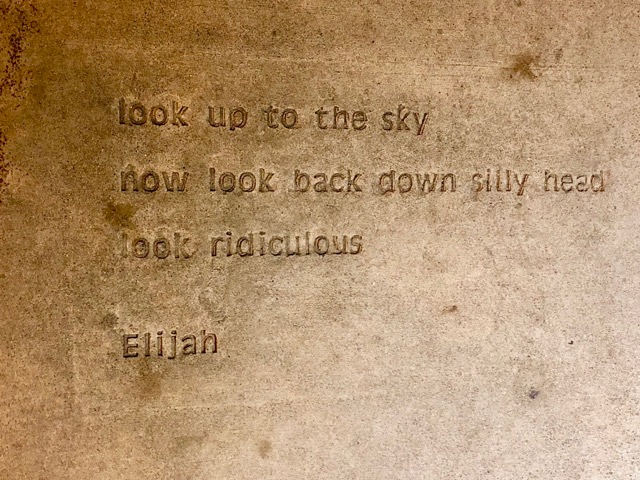 Wisdom on the wall at Generous Earth Pottery 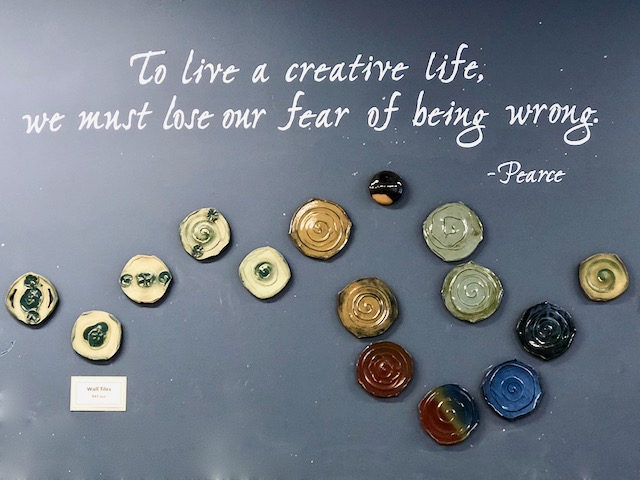 Much like Milwaukee, La Crosse is a beer town with a rapidly expanding craft beer scene. And (again, like Milwaukee) it’s been home to a variety of breweries over the years. One of the most well known is Heileman Brewing Co. (makers of Old Style) which brewed there from 1858 to 1996. They’ve since been replaced by City Brewing Co. (the original name for Heileman), home of the World’s Largest Six-Pack.

As cool as that sounds (sarcasm intended), we opted for a visit to Turtle Stack, a relative newcomer to the scene. Its nano-brewery and tasting room was within walking distance of the Charmant Hotel, and it turned out to be a fortuitous stop. There were delicious German-style brews, friendly folks and an atmosphere that verged on artsy. 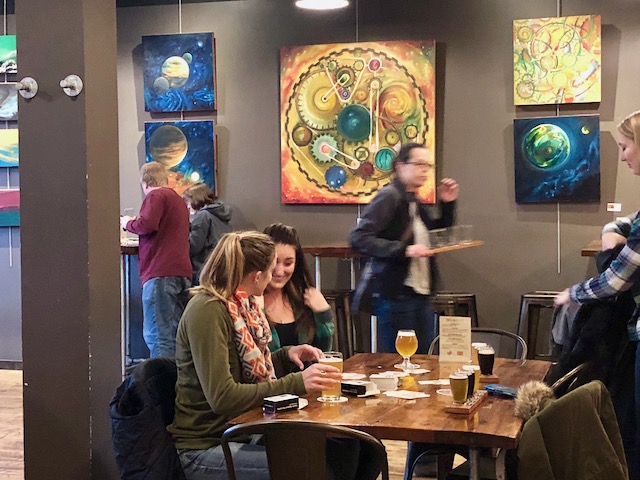 Next time, we’ll make a trek to La Crosse’s craft brew darling Pearl Street Brewery, a brewery operating out of the historic La Crosse Footwear Building. There are also visits to be made to Two Beagles Brewpub and Skeleton Crew Brew in nearby Onalaska. 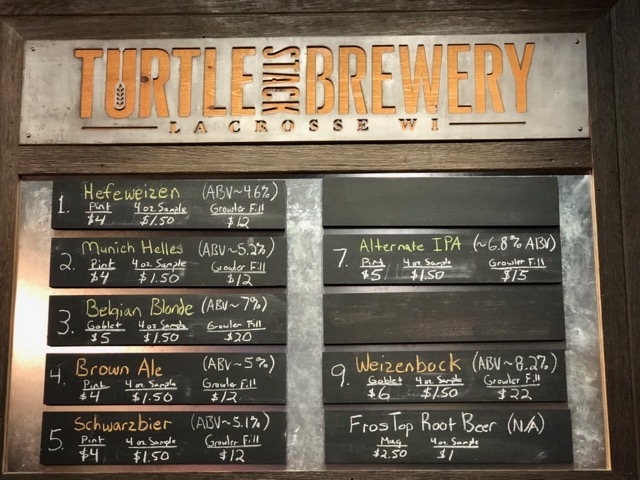 When we had lunch at Driftless Cafe, Ruthie Zahm recommended we check out a newer hot spot in Downtown La Crosse called Lovechild. I would’ve visited on the basis of the name alone, but it turns out the restaurant is owned by influential Twin Cities chef Jay Sparks and his partner, Joan Ferris, a native of nearby Onalaska. My interest was piqued.

It got even better when we walked into the restaurant to find that as much attention had been paid to the atmosphere as the food. The space was beautiful and inviting with dim lamplit lighting, intimate and plush crushed velvet booths, deep red velvet curtains, exposed brick walls and immensely high ceilings. The warm decor provided sharp contrast to the open kitchen, which stood out with its bright white light at the back of the restaurant, offering a sort of partially-removed theater for engaged diners. 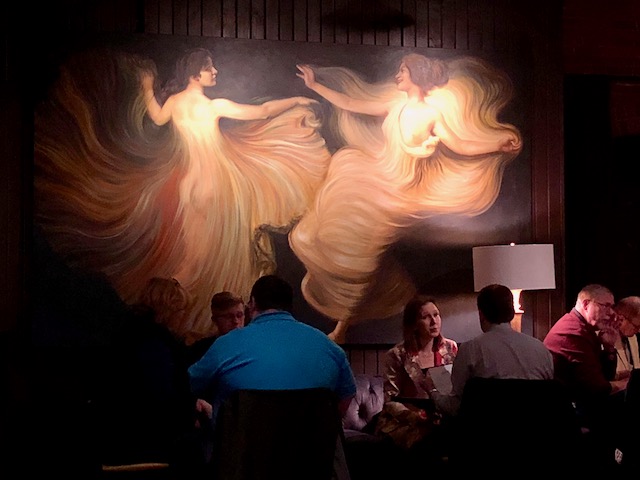 The wait time for the restaurant on a Saturday night was relatively long. But we lingered in a pair of blue velvet chairs near the front of the restaurant and enjoyed a glass of wine and a bit of people-watching.

Once seated, I was delighted to find that the menu was filled with intriguingly simple dishes with an international flair (think King Salmon was chermoula and couscous and "peposo notturno" braised beef with polenta). We relished a plate of grilled lamb spiedini with harissa, yogurt and cilantro ($12), which transported me back to days spent in Tunisia during college, when I first discovered the beauty and complexity of harissa. 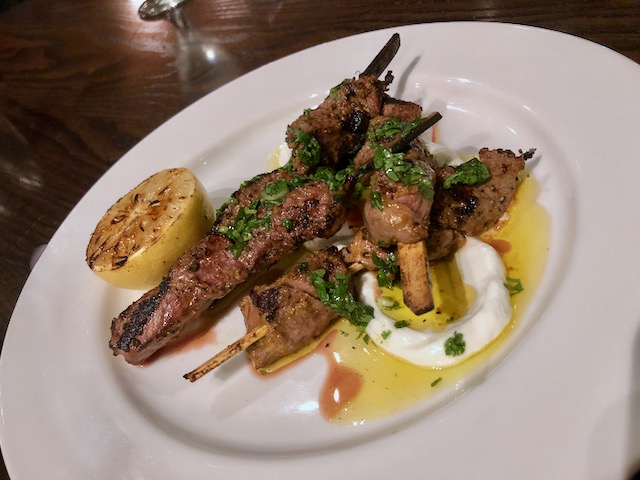 I also found myself more than content with a dish of tender housemade pappardelle prepared simply with a gorgonzola cream sauce studded with pistachios and flavored with sage and garlic ($18). So simple, yet so well prepared. The meal made for a date night made in heaven. 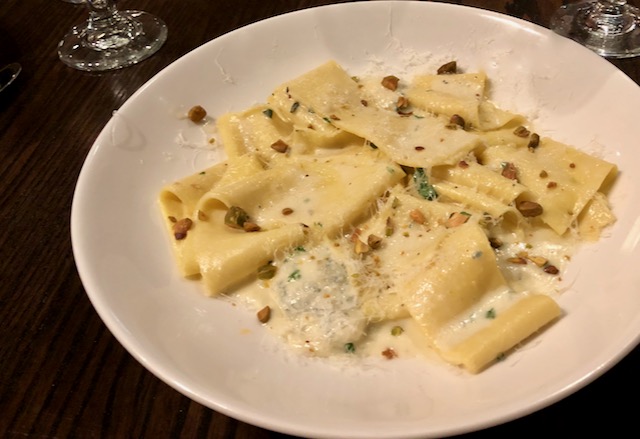 After our leisurely dinner, we made our way over to Le Chateau, a French restaurant located in an historic home near Downtown, hoping to grab a bit of dessert. Unfortunately, the kitchen was already closed. So, we hopped down to the restaurant’s new lower level speakeasy bar where we ordered up two of their signature smoked cocktails. You can watch the theater in this quick video I took while we were there.

On our last morning in town, we decided to try out an oft recommended spot called The Mint. Brunch was a good bet at the cozy restaurant owned by DriftMore (get it?), the restaurant group that also manages The Root Note. Turns out it serves inventive plates like a take on Eggs Benedict featuring wild rice cakes, poached eggs and bourbon maple hollandaise ($12) and cherry chocolate chip pancakes with cardamom whipped cream ($9). Both were delicious and a step outside the usual and the Bloody Mary ($8) was as solid as they come. 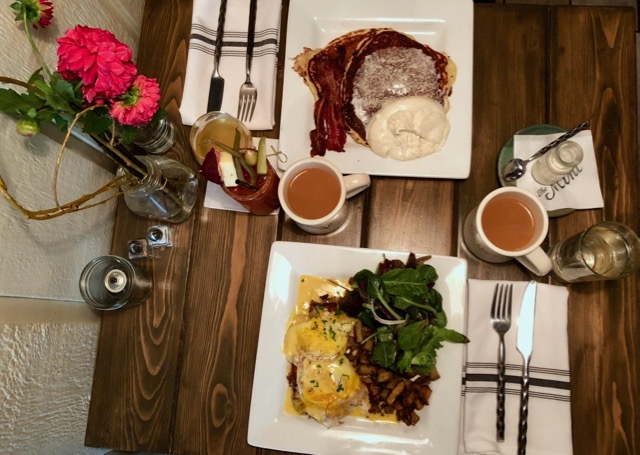 It was a cool 45 degrees outside, but I’m almost a bit regretful that we didn’t take the opportunity to sit on the restaurant’s patio, where a number of guests chose to dine. It was quite a sight, hands wrapped around steaming cups of coffee and legs covered with cozy lap blankets provided by the waitstaff. And I smiled. After all, this is Wisconsin. More places should embrace our chilly autumnal weather with such grace. 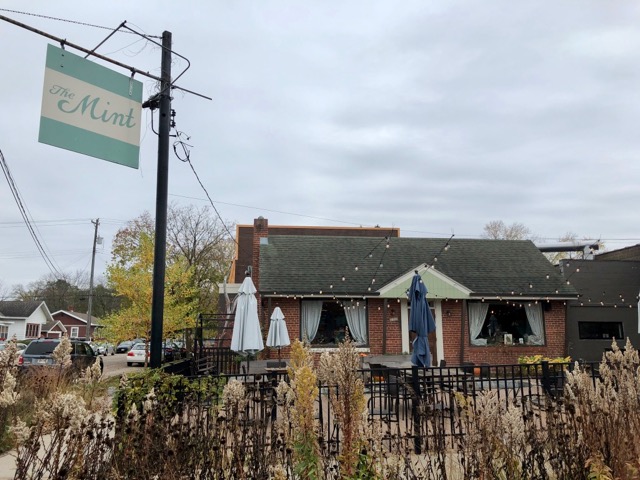