Fifteen years ago, Molly Snyder left a "good" job at a publishing company for a questionably stable job at OnMilwaukee. Some thought she was nuts, but she never looked back. Recently, in honor of her anniversary, Molly got the company logo inked on her arm. See the video here.

Fifteen years ago this month, I was working at a large publishing company in Waukesha as a communications manager. When I accepted a job with a local entertainment magazine – referred to back then as a "dot com" – numerous people in my life expressed their disbelief. Why would I leave such a "good job" for one "on the Internet," which, at the time was still mysterious to many and, therefore, perceived as unstable and futureless – especially in a then slow-to-change place like Milwaukee.

All I knew at the time was that, although I learned a lot at the publishing company, I was done working in a cube, I didn't look that great in a blazer and I wanted, more than anything, to spend my days and nights writing about Milwaukee.

I also desired a job that didn’t feel like work. That might sound strange, but I believed my professional life and my personal life could merge as one so I wasn't a clock-watching time puncher. I wanted a fluid existence of life and work swirling into one fingerpainting, suspecting it would teeter between messy and masterpiece.

So when Andy Tarnoff asked me to meet him and Bobby Tanzilo at Trocadero for an interview, I was stoked. I had been freelancing at OnMilwaukee for a year, so I was certain I wanted to do this full-time. I just hoped they felt the same – and wouldn't judge me for accidentally over-dying my hair shocking red the night before the interview.

Bobby and I already knew each other from the local music scene and from the Downtown YMCA, where I was his manager for a few years. We have chortled over the irony of that many times over the years, that at one time I was his "boss" and now he's my managing editor.

The interview didn’t last long; I’m not sure I even finished my drink, but suddenly I was hired. I knew I was making the right choice. It was one of the few decisions wherein I actually felt  in my gut that I was doing the right thing.

My first day at OnMilwaukee is humorous to look back on. These days, we run a pretty tight ship in the editorial department and we have much of our content budgeted weeks in advance, as well as the flexibility and hustle to write articles on the fly that reflect up-to-the-minute happenings locally and beyond.

"What do you want to write today?" Andy asked me, after showing me the important stuff like where the bathroom and coffee pot were located.

The next thing I knew, I was driving to Mitchell Street to write a story about the quirky and wonderful now-defunct department store. I interviewed the owner on a pad of paper with a Dictaphone and I snapped photos with a long-misplaced point-and-shoot of the shop's various wares from muumuus to wacky-shaded lamps to purple men’s suits.

By the end of the day, I had an 800-word article posted on the site and I was immediately addicted to the thrill of busting ass, pushing through the pain of writing, loading up a story and then seeing it live on the website. Now, 15 years later, I am still a junkie for this process.

Like any long-term relationship, OnMilwaukee and I have had our share of ups and downs. I’ve definitely made some mistakes over the years – I once posted a potentially offensive photo that was a PETA ad and included fake pubic hair, which gave Andy heartburn and hair loss – but most of the time I have contributed, I hope, in a positive and fun and innovative way. We have a down-to-earth, sincere, professional publication over here. The OnMilwaukee writers are as awesome and awkward as Milwaukee itself.

To celebrate my 15-year anniversary, which officially took place on June 13, I decided to get an OnMilwaukee logo tattoo, designed by my friend and coworker Jason McDowell. (This is actually my second Jason McDowell tattoo; he also designed a tribute-to-my-dad tattoo a few years ago that is just below my OnMilwaukee tat.) A few people said, "Wow, hope you don’t get fired." 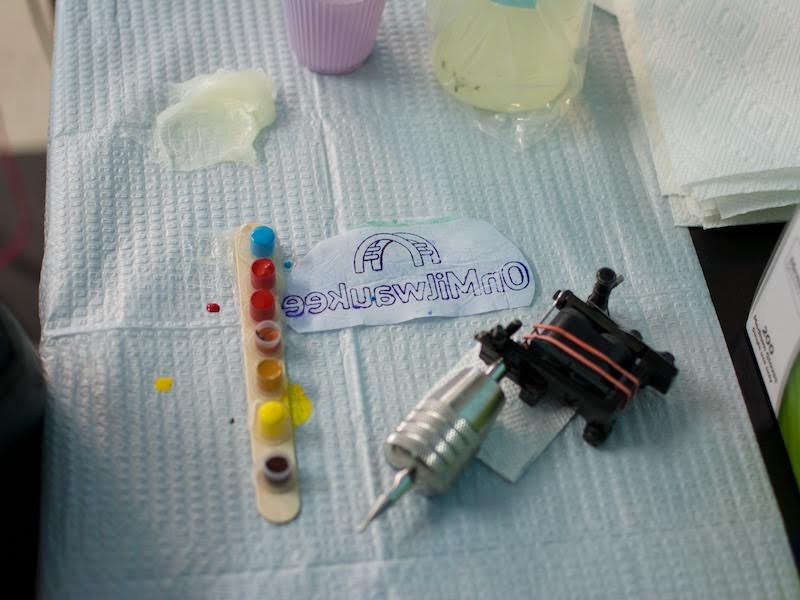 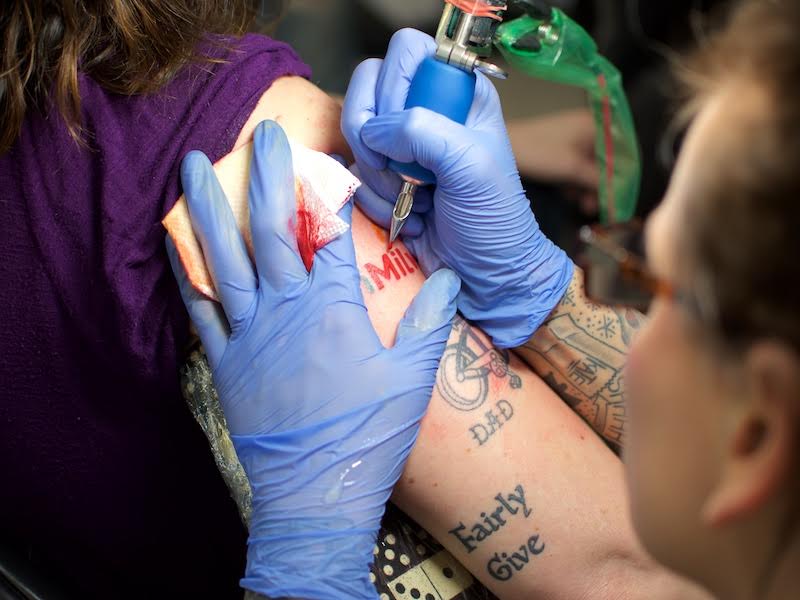 Although I have little concern about getting canned at this point (as long as I keep pube shots off the main page), I also wouldn’t regret the tattoo even if I did. I consider my tattoos – which include my ex-husband’s name – to be a visual timeline of my life, both adornments and war wounds. They represent the people and things that have had the most impact on me.

Before signing off and committing to another 15, I have to thank everyone at OnMilwaukee – most of all Andy and Jeff Sherman for their leadership, friendship and for financing the tattoo. Also a shoutout to my current talented and hardworking co-workers, as well as those who made my office life bliss in the past (I'm talking about you, Julie Teska, Maureen Post, Erin Ulicki, Jim Owczarski and the late but always in my heart Tim Cuprisin, who told me many wise things, including the brilliant, "when in doubt, be vague.")

And thank you, OnMilwaukeee readers, for letting me grow and experiment and shine and flop. You have granted me a dream come true and I am at your service. Just one final request: please keep clicking.