Sara Padley started in the service industry working as a server at Stonefly Brewing Co. (now Company Brewing) and found herself smitten with the brewing process.

"I knew then that I wanted to learn as much as I could about craft beer and really get into the industry," says Padley.

A year ago, she started working at Drink Wisconsinbly Pub, 135 W. National Ave., from the first week the bar-restaurant opened its doors.

"I’ve loved working here ever since. I just moved to Walker’s Point, across the street from DW, in fact," she says.

OnMilwaukee stopped in Drink Wisconsinbly, which recently won Best New Bar, and chatted with Padley about dogs, cheese curds and, of course, beer.

OnMilwaukee: Where did you grow up?

Sara Padley: I grew up in a small farming town outside of Madison called Oregon. My dad was a farmer. I grew up with horses. It was great, but I fell in love with Milwaukee and moved here nine years ago.

Do you miss rural life?

Sometimes. But then I just go and visit. Milwaukee is addictive. It’s my home now.

Where have you worked other than Drink Wisconsinbly and Stonefly?

I was a bartender at The Stone and worked on the RiverWalk Boat Tours which was really fun.

What are your favorite drinks to consume?

As I mentioned, I’m super into the craft beer scene. I love going out exploring new breweries in Milwaukee and Madison. It’s hard to pick favorites, but I really like Urban Harvest and Enlightenment. And I really like sour beers a lot. 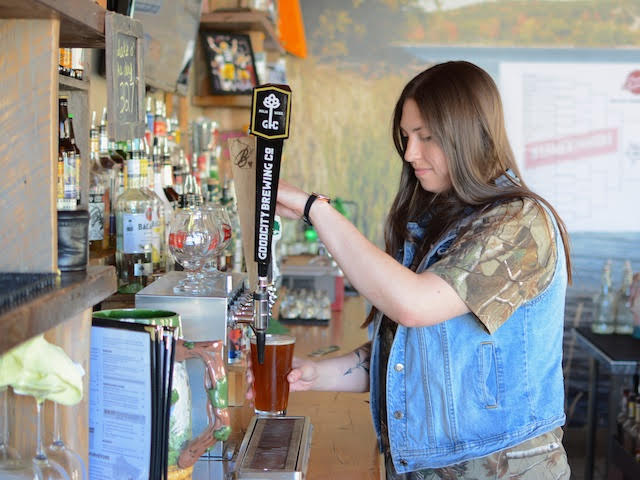 Old Fashioneds. Our Old Fashioned here is really great. It’s classic, like one my uncles would drink. I dream about muddling I do it so much. I love making them.

Are you a home brewer?

I’m into the idea of home brewing, but I don’t follow directions very well so I think I’d be a terrible home brewer. I’ll leave it to the experts.

What is your favorite thing on the menu here?

We have really awesome cheese curds. I hear all the time that we have the best in the city. And our burgers are really good, too, and made with so many locally-sourced ingredients.

What do you like to do when you’re not working?

I love to work, so I’m here most days. But I have a puppy under a year old – shepherd mix named Daisy – who I love spending time with. I’m obsessed with her. I also like hanging out in Milwaukee’s bar community.

Do you hope to open your own bar some day?

I do. That would be a dream come true. But it’s not time yet. I have years of bartending ahead of me and plenty of time to figure it out.