Pabst, Schlitz, Blatz, Miller and others earned Milwaukee the moniker Brew City, but did you know that it's now also a center of American hard cider production, too? All of the 10 MillerCoors cider varieties are now produced here. We went to take a look.

Pabst, Schlitz, Blatz, Miller and others earned Milwaukee the moniker Brew City, but did you know that it’s now also a center of American hard cider production, too?

Since February, MillerCoors has moved all of its cider production to the 10th Street Brewery, which underwent a $20 million expansion to make that happen. That’s on top of a $50 million investment to expand brewing and packaging operations there in the previous year. 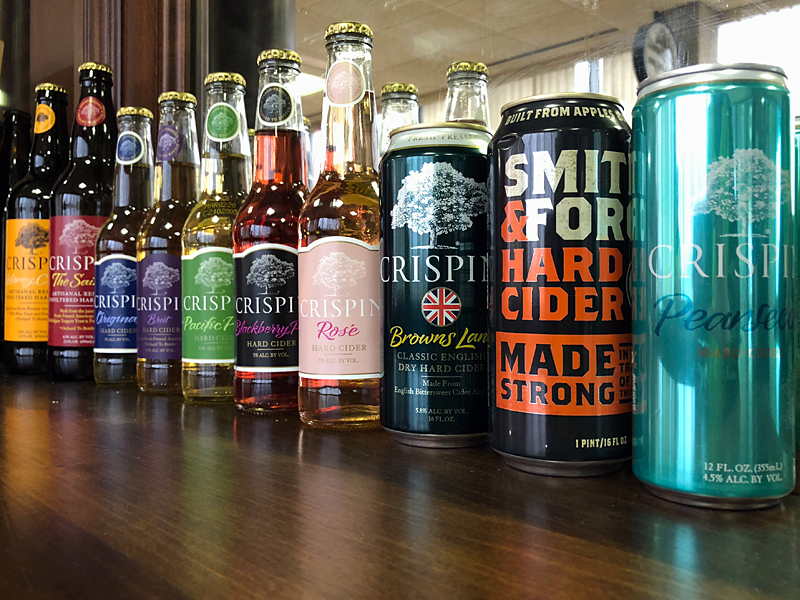 Before the expansion, the brewery employed 15 workers. That number has now surpassed 40 and is expected to continue to grow.

One of the workers new to 10th Street is Head Cider Maker John Enzenauer, who relocated to Milwaukee in November, from Colfax, California, where Crispin was previously based.

Though cider sales dipped for a couple years, they were back on the rise again last year, according to MillerCoors and Crispin's sales volume rose 40 percent last year, and its Rose' was the second-best selling label in its category.

All 10 varieties of these ciders are now produced and packaged right here in Milwaukee.

"I came in November," says Enzenauer, while we tour the facility – back to front, starting with packaging – "I love it here. I just bought a house."

Starting at the end 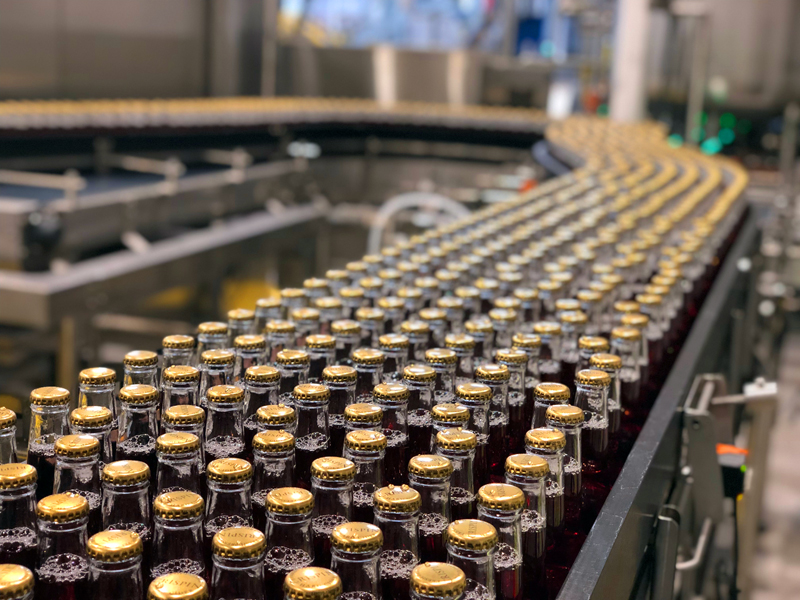 The reason we start at the end is because the packaging line is key to why cider operations were moved to Milwaukee, according to Operations Manager Janelle Heinrich.

"Our packaging line is incredibly flexible," says Heinrich as she explains how empty cans and bottles of differing shapes and sizes make their way from pallets to the bottle washer to the filling line to packaging in six-pack baskets and, finally, cases. 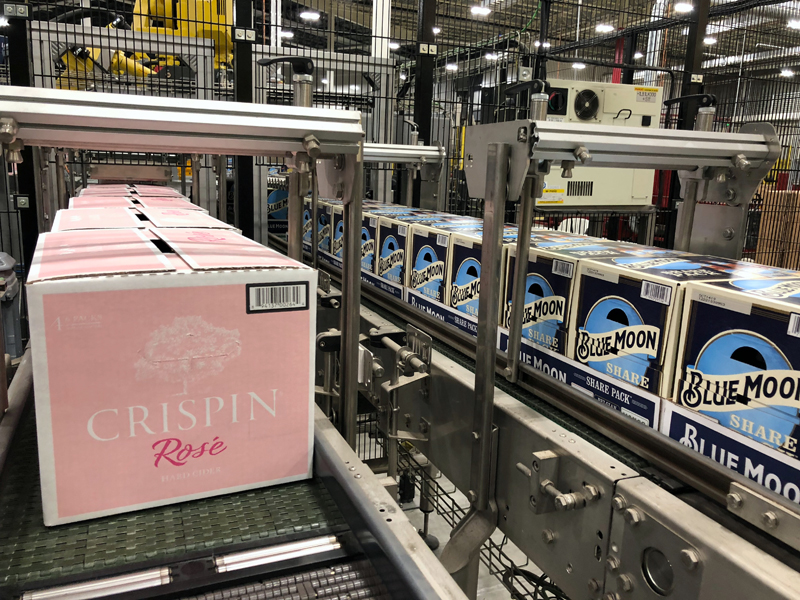 The equipment can easily be adjusted to the proper container, meaning that the line is extremely efficient.

"It’s a big part of why the cider making was brought here," she says.

Except for Blue Moon, brewed in the Valley, everything packaged at 10th Street is brewed on-site. 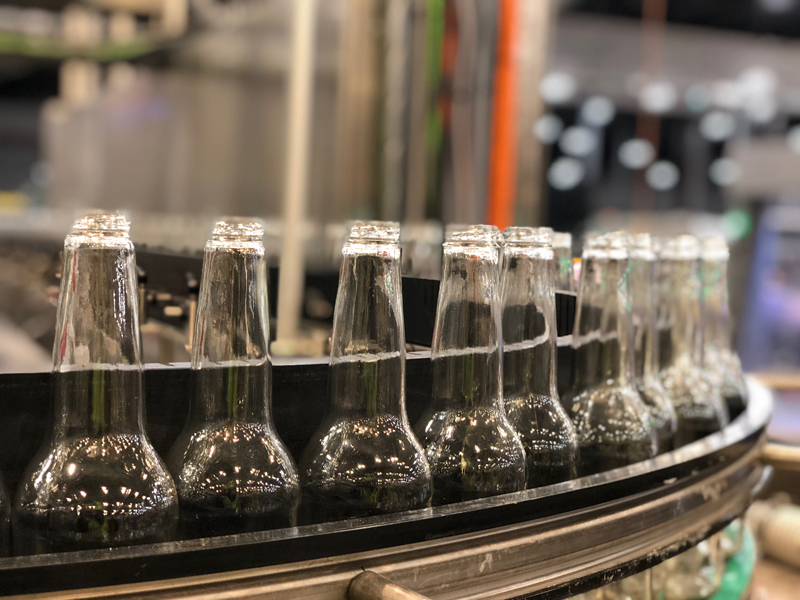 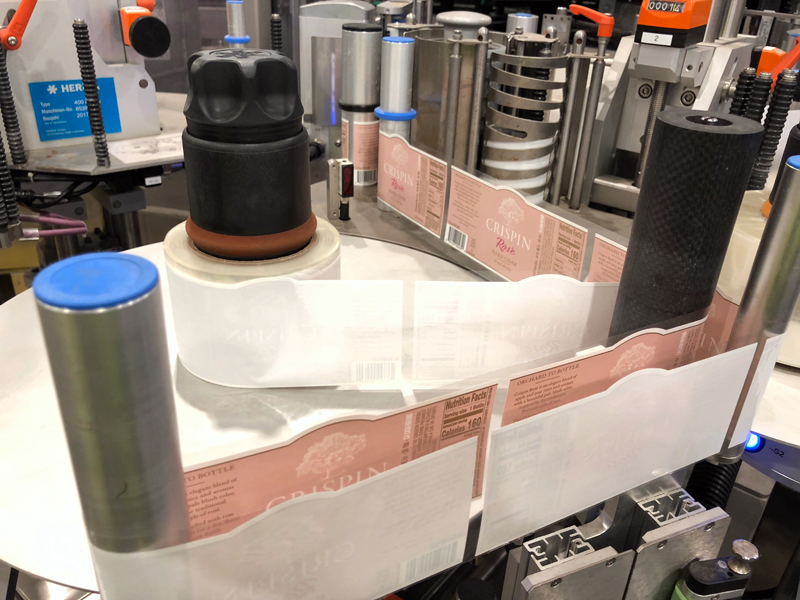 It’s pretty amazing to watch the process, from bottling and canning to finished cases. Crispin products are packaged in a number of different containers, including 12-ounce and 22-ounce bottles, 16-ounce cans and 12-ounce "sleek" cans. 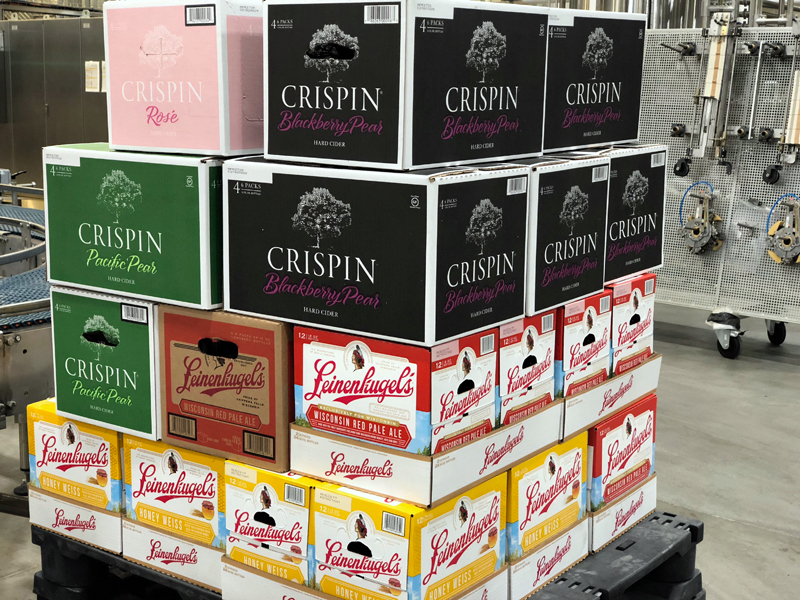 The products packaged so far during the week I visited.

In the cider cellar

After packaging, we walked across to the cider cellar, which is a densely packed room with a soaring ceiling that is where you’ll find the fermentation tanks and centrifuge clarifying system. 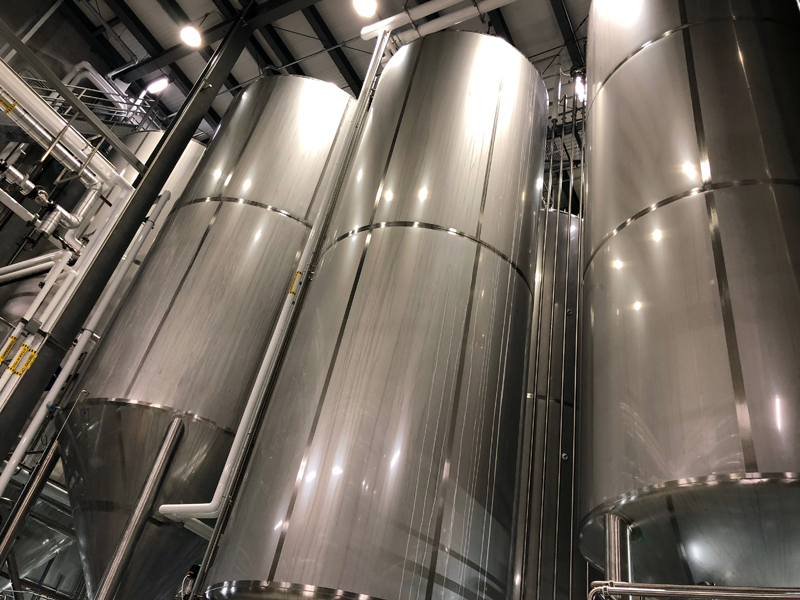 "We use a blend of five to seven varieties of apples," he says. "None of it's single varietal. It's all a blend, which gives you a complexity of flavors. If you used just Granny Smith you’d get a tart apple, but you don't get a lot of body, you don't get a lot of sugar to it. With a blend we get the sugar loads we want, the acid loads we want and the overall flavors we want."

The "fruit bill," if you will change, he says, based on the acids and sugars present in each year’s crop for each variety.

"What we do is blend to hit the target sugar and the target acid we’re looking for. There are about 12 varieties that we use, and we typically use five to seven of that. It just depends on what we need. So if we pick out five and blend it, and we need some more acid we’ll go get more of the apple that will trigger more acid."

The apples are grown and pressed in the Pacific Northwest and shipped via tanker trucks to Milwaukee, which takes about three days.

"It will come in in 5,500-gallon tankers," Enzenauer says. "We receive it into these juice tanks and then we pasteurize it right away (in the machine pictured below). We don't want the raw juice sitting because you can have fungis, fermentation and things like that. After we pasteurize it, it goes into our fermenters, and then we pitch our yeast at that point. 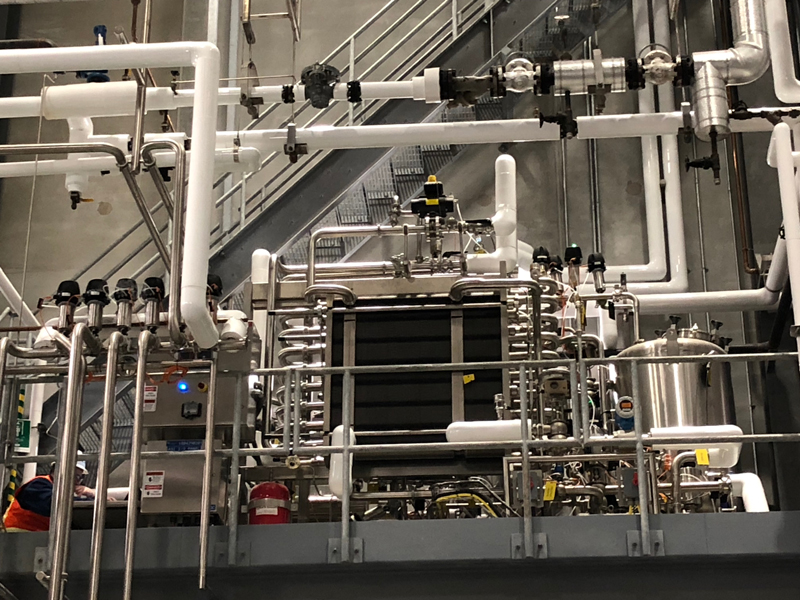 "Depending on which product we're making, fermentation varies between 16 and 21 days. The Honey Crisp and the Saint are unfiltered. Those get fermented by themselves. The Saint actually uses a different yeast than the other products do. It uses a Belgian Abbey brewing yeast, which gives it a whole other characteristic."

Next, the cider is centrifuged for clarity and filtered (except the unfiltered ones, of course), and moved into giant stock tanks, where it awaits the next step, which takes place in what is called the flavor kitchen.

The process for the pear cider is the same, says Enzenauer, except that only a couple varieties of fruit are used.

"The challenge with pears is that you have a lot shorter timeframe for them," he says. "Whereas you can get apples year-round in big quantities, pears don't hold up as well. It's a challenge to manage across the summer, but we do."

Crispin’s rose is the only cider in the product line that blends apples and pears.

There is no aging required for the cider, though Enzenauer says that Crispin has, in the past, done some barrel-aging of its ciders.

"Historically, we've done some bourbon barrel-aged ciders and things like that, just as one-offs," he says. "They're fantastic. Apples and bourbon go together really well. If we were doing that we would take that fermented wine, put it in the barrel. I know some small cideries that actually ferment in barrels. Some of the more traditional ways."

But that can be challenging work sometimes, in terms of bacteria control.

"It's really a fine line, because you have to find the balance of being sterile, but without destroying the barrel. Then you lose all characteristics in the barrel, the wood. It's a really tough thing to manage on our scale."

It turns out that the flavor kitchen – located in what was the packaging and loading dock area back when 10th Street was a much smaller brewery – looks nothing like a kitchen. In fact, it’s a fairly small space – compared to the cellar – and is densely packed with tanks and piping.

One of those tanks is called the blender. 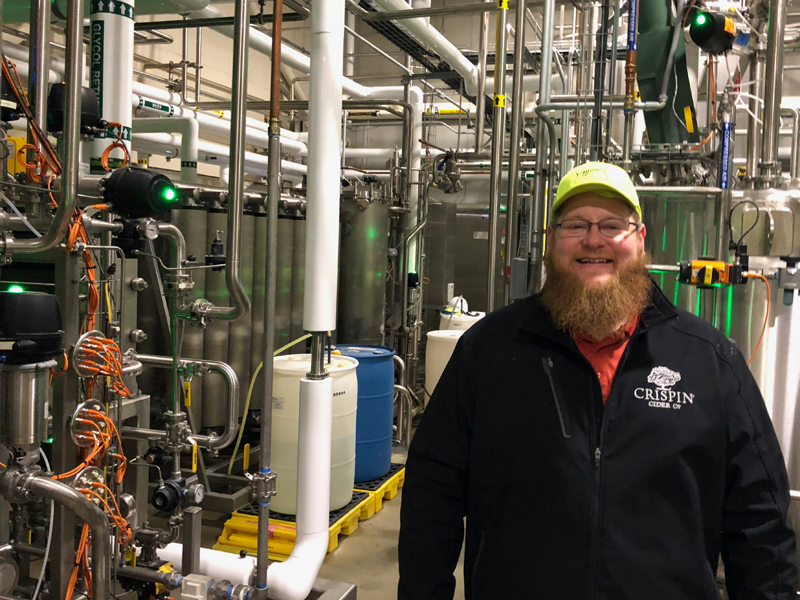 John Enzenauer in the flavor kitchen.

"We bring the apple or pear cider down, and this is where we blend it with anything else – like if we're adding honey, or as in the Rose', we have rose petals and hibiscus."

Then, the cider is filtered through a system created for filtering wine.

"They're very gentle on the product so you don't lose a lot of the aromatics," says Enzenzauer. 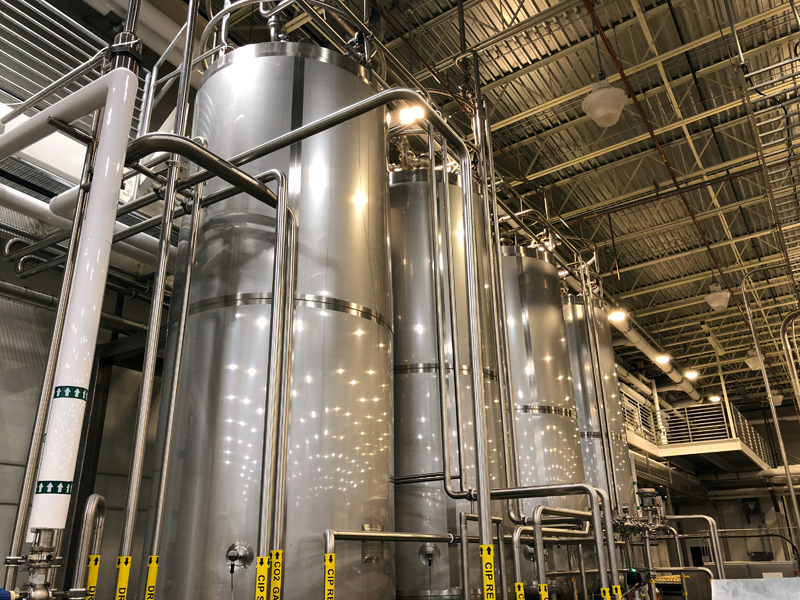 From here, the cider is pumped directly across to four holding tanks (pictured above) in the packaging building, where it is immediately packaged to make room for the next product.

"It's what we call dynamic release," says Heinrich. "John does a batch, and then it goes into- those tanks. So whatever he produces over here is what we then package over there. We’re packaging it as he's making it, basically."

The cidery runs three shifts – 24 hours a day – every day. But the packaging line only runs two shifts, so while two of the cidery shifts are making cider, the third is for cleaning, prep and support work.

A big step and more to learn

The system here in Milwaukee is nothing like what Enzenauer was using in Colfax, he says.

"It far and above exceeds what we had (there)," he says, as we stand in the flavor kitchen. "In size and capacity ... and more.

"Everything in Colfax was a very manual process. We were rolling pumps around the tanks and everything like that, whereas here you've got everything in place and safe. We have a lot of flexibility with this system. You can go from that one batch to another flavor with minimal time in between."

"We're still trying to figure out how to use all the automation to our advantage, because there are days when John's like, ‘Just do it manually. I know that I can get it accomplished that way.’

"The automation is great, but we're still beginning the learning curve of it."