With Day Three's lineup at Country Thunder every bit as packed as the day before's, we were drooling with anticipation - and Thomas Rhett, Old Dominion and the rest of the lineup did not disappoint.

After a wedding on the grounds, the day was off to a completely inconceivable start. With Day Three’s lineup at Country Thunder every bit as packed as the day before’s, we were drooling with anticipation.

Under blue, but blazing, skies, there were still puddles everywhere in the Thunder Bowl. And frankly, the fresh dairy air was a little overwhelming. But hey, this is country, right?

The musical day opened with the sweet voice of Morgan Evans, followed by a killer set by rock country artist and songwriter phenom, Ryan Hurd. William Michael Morgan flew in next with a set as great as the one he played at Summerfest. By the time Cam hit the stage at five, it was absolutely sweltering, but Cam wasn’t fazed in the least, kicking off her shoes and leaning into the heat. Cam’s hour long set went by way too fast and was filled with new music, her original stuff and a goosebumps-inducing rendition of "Sweet Dreams," a Patsy Cline cover. Tucker Beathard followed with a set more reminiscent of Bon Jovi than country with every rock electric guitar, but still great.

And then … the main events.

First up: Old Dominion. Where have these gents been all my life? Right, I know, not born for most of it. But seriously. Old Dominion brought a whole different vibe to the day. Their brand of fusion country infused with reggae and hip-hop meets dirt road was somehow relaxing and energizing at the exact same time. They blew the doors off their opening song "Snapback" and then followed with "Shut Me Up" and "Said Nobody" before slowing it down with "Nowhere Fast." 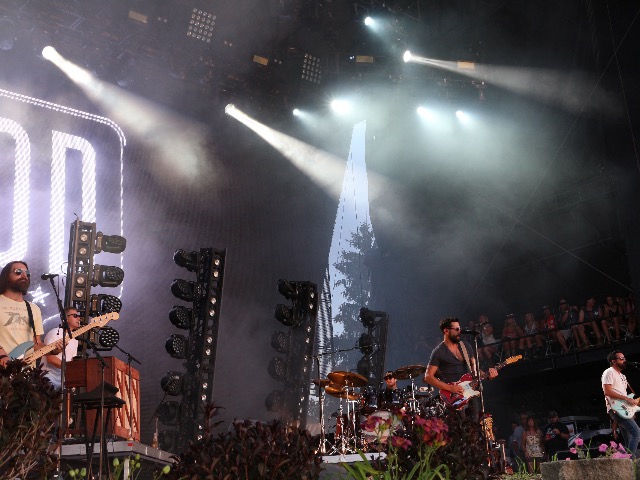 Lead singer Matt Ramsey was up and down the catwalk, and near the beginning of their set, he grabbed a pink Old Dominion t-shirt, telling a story about driving over to bass player Geoff Sprung’s house, making those t-shirts in his kitchen, getting in their crappy old van and driving around the country playing until two in the morning. He said that if they sold ten t-shirts, they were happy, "And now look at this!" It’s great to see a group that remembers where they came from.

Later, during "Crazy, Beautiful, Sexy," Ramsey walked down to the landscaped area and picked flowers (apologizing, of course). He handed them out to girls in the crowd, and I’m pretty sure one of them was Olivia from last night’s Keith Urban selfie.

Old Dominion played a good mix of well-knowns, newer hits and brand new songs. It was just such a good set. A thing of beauty, really. A perfect lead up to Thomas Rhett, who’s got his own brand of fusion country. 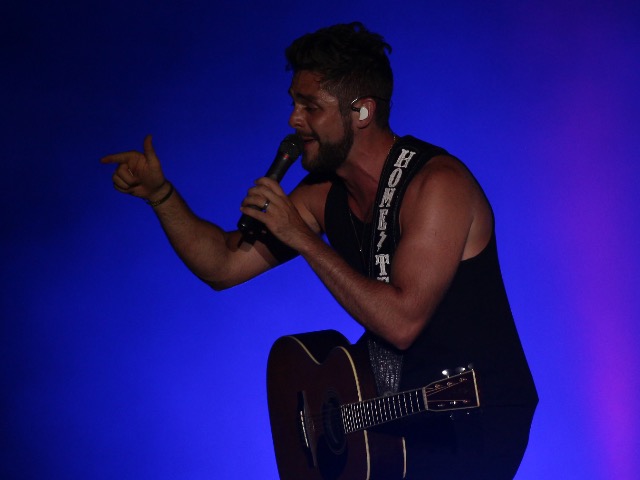 Batting clean-up, with the Thunder Bowl packed, Thomas Rhett hit the stage ready to bring it playing his fifth Thunder in seven years. After ripping through his first two songs, Rhett paused in the middle of the third to tell the crowd, "You are always the loudest, rowdiest, kindest people that we get to play for, so we really appreciate that, thank you very much!"

If Rhett’s music is a mix up of country, pop, rock, R&B, rap and oldies, his set was nothing if not eclectic, playing his hits, those he’s written for others, throwing in Bruno Mars and an electrified, sort of crazy, dance version of "Vacation," which included his band’s introduction.

At one point, Rhett, his three guitarists and his drummer with a cajon headed out to the catwalk and threw down three partially acoustic covers. It was just freaking fantastic. You could just tell they were having a blast. And if the goal was to get the crowd totally with him, he accomplished that. If the goal was amusement for himself and his band mates, well, he did that, too.

During "T-Shirt," Rhett jumped on drums – well, he had his own scaled down version and played with his drummer. Then he walked down the landscaping and gave his sticks to girls that I think were about to die of infatuation. I’m sitting here grinning just remembering it. Rhett just looked like he was having such a great time on stage tonight. 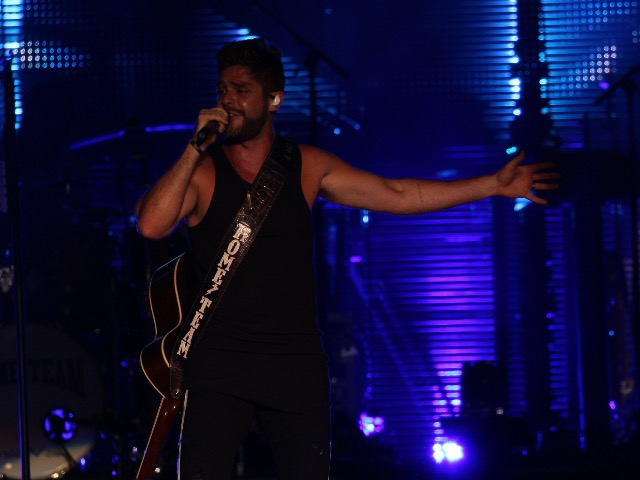 Thomas Rhett has quite a story. He’s married to wife, Lauren, who he met in first grade. They recently adopted Willa Gray from Uganda and are pregnant with another little girl due soon. His dad is Rhett Akins ("That Ain’t My Truck," "Don’t Get Me Started"), and Thomas has said that his dad has been a constant calming influence. It’s not hard to see that Thomas’ performing chops likely come from years on stage playing drums for his dad.

His music is a confluence of every style out there, even though his dad was a country artist. Rhett grew up listening to everything to all kinds of music. As a result, his music and his songwriting reflect those influences. The result is nothing short of dazzling – and with seven number one singles, it seems like the country world agrees.

It’s hard to fathom that only last year, Thomas Rhett was opening up for Eric Church in the Thunder Bowl. Oh how far he’s come in a year!

And with that, Day Three is in the books. Not as dramatic as Day Two, but every bit as exciting.