The only good part of having your "Catan" games stolen? Unboxing the new ones

Two years ago, MIAD instructor Andy Bernier came back to his car to find his entire collection of "Settlers of Catan" - including a handmade game board - had been stolen. Now he's unboxing a newly acquired set. Watch it here!

"Settlers of Catan" (often referred to simply as "Settlers" or "Catan") is a multi-player board game that challenges players to build the best settlement from the ground up before their opponents. The challenge of the game depends on your ability to manage the abundance – or scarcity – of different resources, your ability to haggle with other players and sometimes a little luck to beat the odds.

It's been called the gateway drug to strategy game obsession because it's very easy to learn, the duration is relatively short and the game board layout is always changing so strategy remains fresh. It also helps that it's not a super aggressive game. While players have the ability to block routes, deny trades or send in the bandits, there is not a lot of opponent attacking, which makes for a less stressful environment.

Catan may have also been the turning point that ushered in the golden age of board gaming (though the rise of Kickstarter has probably sped it along). Since its creation in 1995, it has sold more than 22 million copies in 30 different languages and has four expansion sets, as well as the 5-6 player expansions for each game, as well (all told, that's 10 boxes). The game has apparently become a bit of a hobby among many players on the Green Bay Packers.

Sadly, in one case, a game of conquering lands and assets turned into real life thievery.

Two years ago, Andy Bernier, a freelance animator and illustrator, as well as instructor at the Milwaukee Institute of Art and Design, came back to his car to discover all of his games had been stolen, including a hand-made game board.

However, undeterred, Bernier recently reacquired a new set of games, now in their fifth edition, and has begun releasing unboxing videos for each part.

The concept of unboxing videos is simple but oddly compelling: film yourself opening and organizing the game. When I asked Bernier why that is, he said, "It's like popping bubble wrap. There's something satisfying about organizing things."

It's also like opening presents – but without dealing with the cost, mess and clutter. The only thing that's missing is that fresh board game smell.

Take a look for yourself.

Bernier has plans to un-box each game, so if you found a few moments of zen in this video, make sure to subscribe for more. 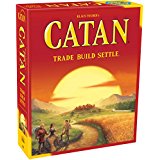 Un-box your own Settlers of Catan.